Homeless advocate Ted Hayes was shot by police, but he praised the cops and blasted violent protesters for drowning out his message. 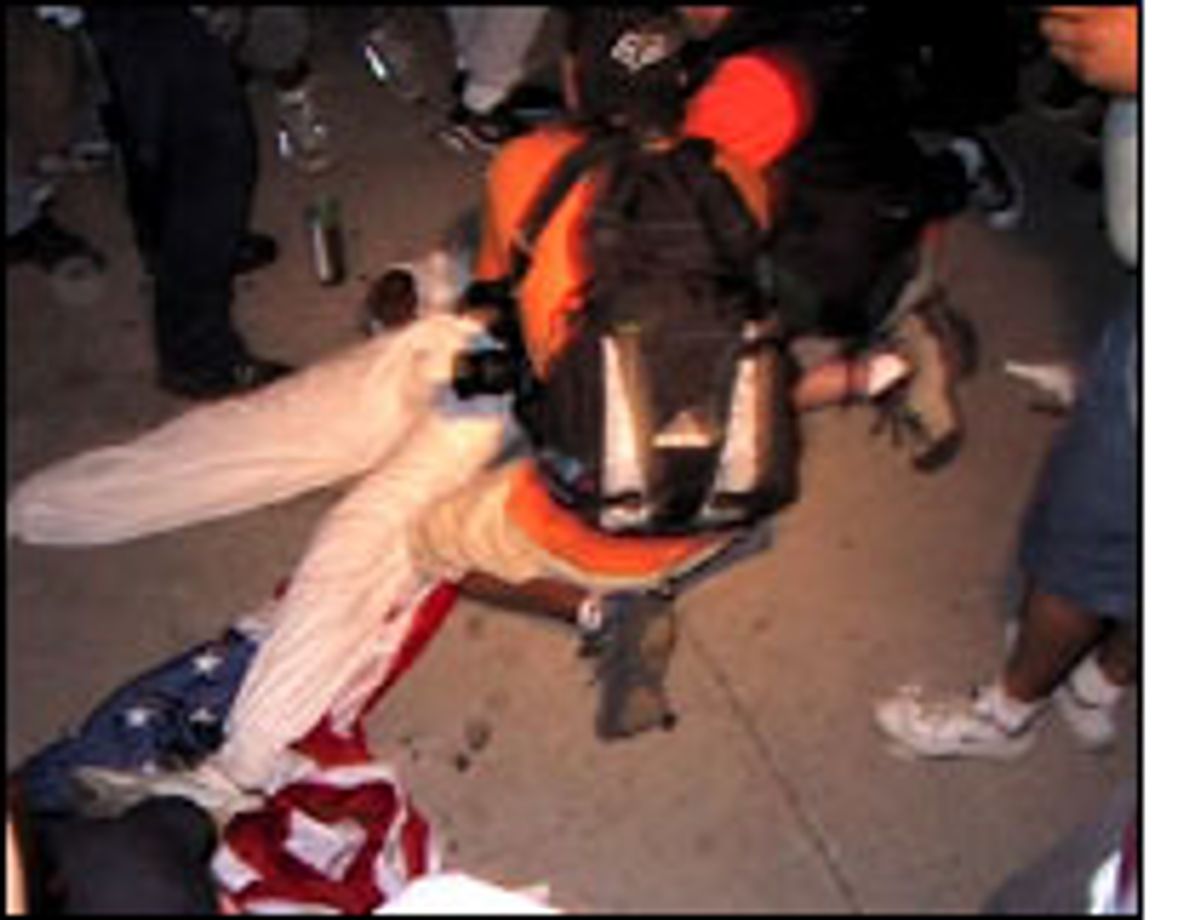 On Monday night, with no warning, Los Angeles police who were herding concertgoers from the Rage Against the Machine concert outside the Democratic National Convention shot homeless activist Ted Hayes with a steel beanbag; and then, while he lay barely conscious and gasping for breath on the ground, flipped him on his belly, stood on his head and neck and cuffed his hands behind him.

One of the night's most memorable images was a picture of Hayes, splayed on the ground on top of the American flag he carried, which ran prominently in the Los Angeles Times. It was the beginning of a week that featured a mild form of martial law as the Democrats gathered at Staples Center mostly oblivious.

The day after his shooting, just out of the hospital, Hayes rather predictably held an angry press conference. But unpredictably, he blasted the protesters and praised the police. In Hayes' view, the demonstrators were at best spoiled white kids, and at worst evil, violent anarchists up to no good.

"Those people robbed the homeless people's freedom of speech last night," he said. "Theyre quick to step over the homeless people, and our cause, to make their noise. Has anybody heard today what the message of the demonstrators is? Have you heard anything about corporate greed and how they are actually oppressing people? Have we heard anything about the corrupt politics of the Democrats?" Long drawn-out sneer: "Noooo-o-o ... all we hear about is ruckus and tear gas and fighting and cops and robbers."

Just to make sure people didn't misunderstand, on Wednesday Hayes went on Fox News Network from a skybox in the very Staples Center outside which he had been shot, and used the occasion to denounce the American Civil Liberties Union for filing suit against the police who had shot him.

And he confessed to KPFK, the local Pacifica radio station, that his homeless convention had been a disaster, shunned by carpetbagging protesters, unable to attract local support because of what he calls the indifference of the "homeless-industrial complex" of social agencies, the message lost in the din of convention hoopla.

Thus did Ted Hayes become a sideshow in the grand media extravaganza from Los Angeles. He's a quixotic figure who shuns his allies and embraces the enemy, a homeless leader who can rally only a couple of dozen people to his cause among all the 40,000 homeless of Los Angeles.

Hayes was furious that news about the protesters' violent clashes with police drowned out his political message. But only by virtue of being shot did Hayes get the media's attention -- an irony that wasn't entirely lost on him.

Few locals were surprised when Hayes got out of the hospital and praised the police. They smiled and said that's just Ted; he is well known in Los Angeles for an unwavering dedication to nonviolence and a very practical bent for getting on with the authorities. Homeless people commit nonviolent crimes every day, he points out, referring to their need to deposit human waste in the streets, illegally. The police are thus a powerful natural enemy who must be engaged diplomatically.

Hayes lives in a homeless encampment called Dome Village, a score or so of Bucky Fuller domes, each 20 or so feet across and 10 feet high at the apex, located just over the Harbor Freeway from downtown L.A. and around the corner from the Medici Suites. A longtime L.A. activist, he agitates for a systemic approach to homelessness through a kind of national Marshall Plan headed by a Cabinet officer, a post for which he is a volunteer. Dome Village also houses a few of the homeless who rally around this idea.

The night he was shot, he had a permit to march nonviolently. He says his group had been promised it could even cross police lines, to set an example of nonviolent behavior. So when a phalanx of police, mounted and heavily armed, started sweeping the crowd down Olympic Boulevard, Hayes, in ragged white shirt and white trousers, carrying a large American flag, marched right up to them.

And they shot him. They were firing rubber bullets, hard cylinders about an inch across and an inch and a half long. Suddenly Hayes was lying on the ground, the flag twisted under his leg, and the crowd was running the other way.

It wasn't supposed to end that way. He and his group had left Dome Village only half an hour before, after a brief rally at which he and his lieutenant, Dexter Clay, emphasized the importance of nonviolence while at the same time trying to whip up some enthusiasm. The march had originally been intended to circle the Staples Center with homeless people holding lights, but it wound up as a pilgrimage by a tiny band of no more than two dozen people.

Carrying signs and chanting, the group followed Hayes and his flag through the dark streets on the west side of the freeway to Olympic Boulevard, and then through the underpass to the convention site. At that point they met the concertgoers streaming down the center of the street, which is very wide, and something almost wonderful happened.

The concertgoers, who were euphoric, took up his cause. "All right! Support the homeless! Yay for the homeless!" They were laughing and smiling and some of them did turn around and join the march, which had been filing east down the north sidewalk while the crowd flowed west in the middle of the street.

By the time Hayes reached the police lines, there may have been a hundred or so people walking behind him. Suddenly there was gunfire. The mounted police kept coming, a solid line of black moving, pausing, firing again, moving, pausing again, firing.

Every time they stopped, the crowd stopped. A few protesters took up a chant of "Shame! Shame!" Then the police would fire again and the crowd would retreat. The whole event took no more than 30 minutes, from the time Hayes and the homeless arrived at the police line to the time the concertgoers were chased through the freeway underpass.

Hayes was taken to a hospital and his followers eventually straggled back to Dome Village. But there was no resentment or anger in evidence. No one talked about police brutality; no one even seemed to see anything unusual in the fact that their leader had been shot. They weren't panicked, they weren't dazed, they hardly seemed upset.

Thanks to his shooting-inspired notoriety, Hayes got onto the protesters' agenda on Tuesday night. But he drew an audience of precisely zero outside his own group of a few dozen. Only a few yards away, as he spoke, convention delegates ran a gamut of sarcasm and abuse from idle demonstrators who lined their route. When Hayes led his band out of the protest area, the homeless line crossed the delegate line at right angles, each filtering though the other and no one even bothering to talk.

Hayes was back out there Wednesday night, trying to convince protesters to stay peaceful and follow the orders of police.

On Thursday, the convention began winding down, as delegates and protesters got ready to go home, and the police prepared to retire to their stations. Dome Village remains, as do the homeless of Los Angeles. Ted Hayes got his minute in the national spotlight, but his issue didn't. But he'll be back out there long after the hoopla has faded.