I wish I could bottle the magic in a pair of Tweety Bird underpants. 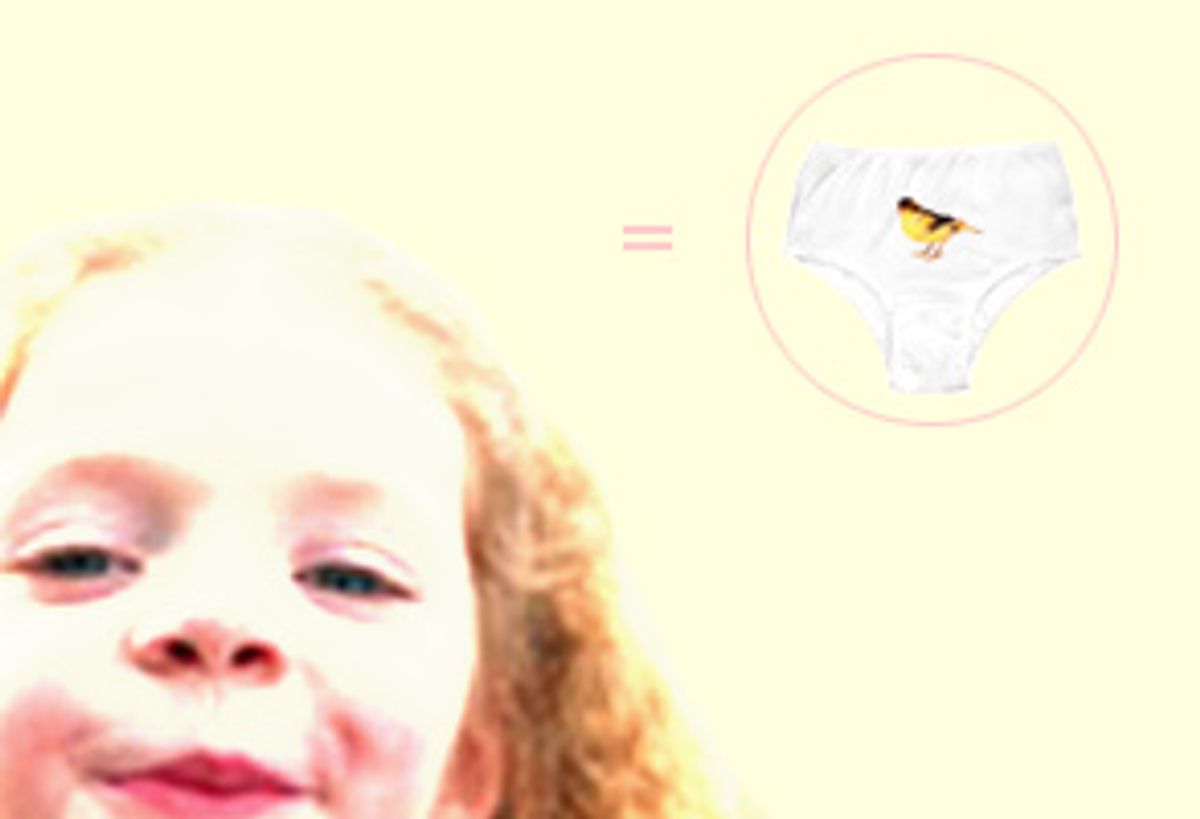 I'd like to tell you a story about children's underwear, but I'm afraid I'll be labeled as politically incorrect or, much worse, accused of being someone who lusts after little kids.

Once I wrote a story about the plaid boxer shorts that the boys at the public swimming pool wore under their baggy pants. A reader accused me of ogling little boys. Another wrote to the newspaper's editor and complained that anyone who made positive remarks about Calvin Klein had to be a pervert and a sweatshops advocate.

Actually, what I had left out of the story was that every time I swam across the deep end of the public pool, a group of young boys would swim directly beneath me and pull their trunks down. I was not impressed. (Although I did note that they could hold their breath for an awfully long time and they were pretty good at swimming with a bathing suit wrapped around their ankles.)

I ignored them until the day when a lifeguard noticed what they were doing and made them get out of the water and sit on a bench in the hot sun, facing a cement wall. I continued to swim laps. I was not at all disappointed that they were gone. But I also knew that this is what male youngsters do in all public swimming pools and that this is what lots of big boys also do, once they learn how to drink beer and go off to college.

Once a week, a 9-year-old girl comes to stay with me while her mother goes to visit her boyfriend who is incarcerated in a nearby state penitentiary. This girl is unfazed by where her mother goes. It has been a constant in her life for so long now that she barely remembers a time when her mother's boyfriend was not in prison.

Yet despite what could be assumed about a child who has grown up in the inner city, in a single-parent home, with a loved one in prison, my friend is filled with optimism. It starts in her very core and emanates throughout her very being, through every layer of clothing, beginning, believe it or not, with her underwear.

My friend is tiny. She's under 4 feet tall and skinny as a pencil, all elbows and knees, sharp angles and flat chest. Last week when she came to visit she said, "Hey, Suzy, look at this!"

She unzipped her jacket, pulled up her sweater and her blouse and her soft cotton T-shirt, and underneath it all she revealed a tiny brassiere, not much bigger than a Band-Aid. I could just barely see her Tweety Bird panties sticking out above her low-slung, baggy jeans. My friend shot me a smile, and then pulled her layers of clothing down, buttoned up, zipped herself in and asked, "What do you have to eat around here?"

Now if she isn't an optimist then I don't know who is. I'm not talking about wondering if I've got any food in my refrigerator, which goes far beyond hopefulness into the realm of make-believe. I'm talking about a flat-chested little fourth-grader, wearing a brassiere the size of a postage stamp and cotton underpants emblazoned with a cartoon character, who is sometimes up and sometimes down, and yet she remains a kid who is looking ahead in the most buoyant, eager way.

Call me politically incorrect. Call me a pervert. I want some of that optimism. I want to wear Tweety Bird underpanties and a bra that has potential.