The speech of his life?

Al packed his speech with policy, but his aim was simpler: To differentiate the Gores from the Bushes. 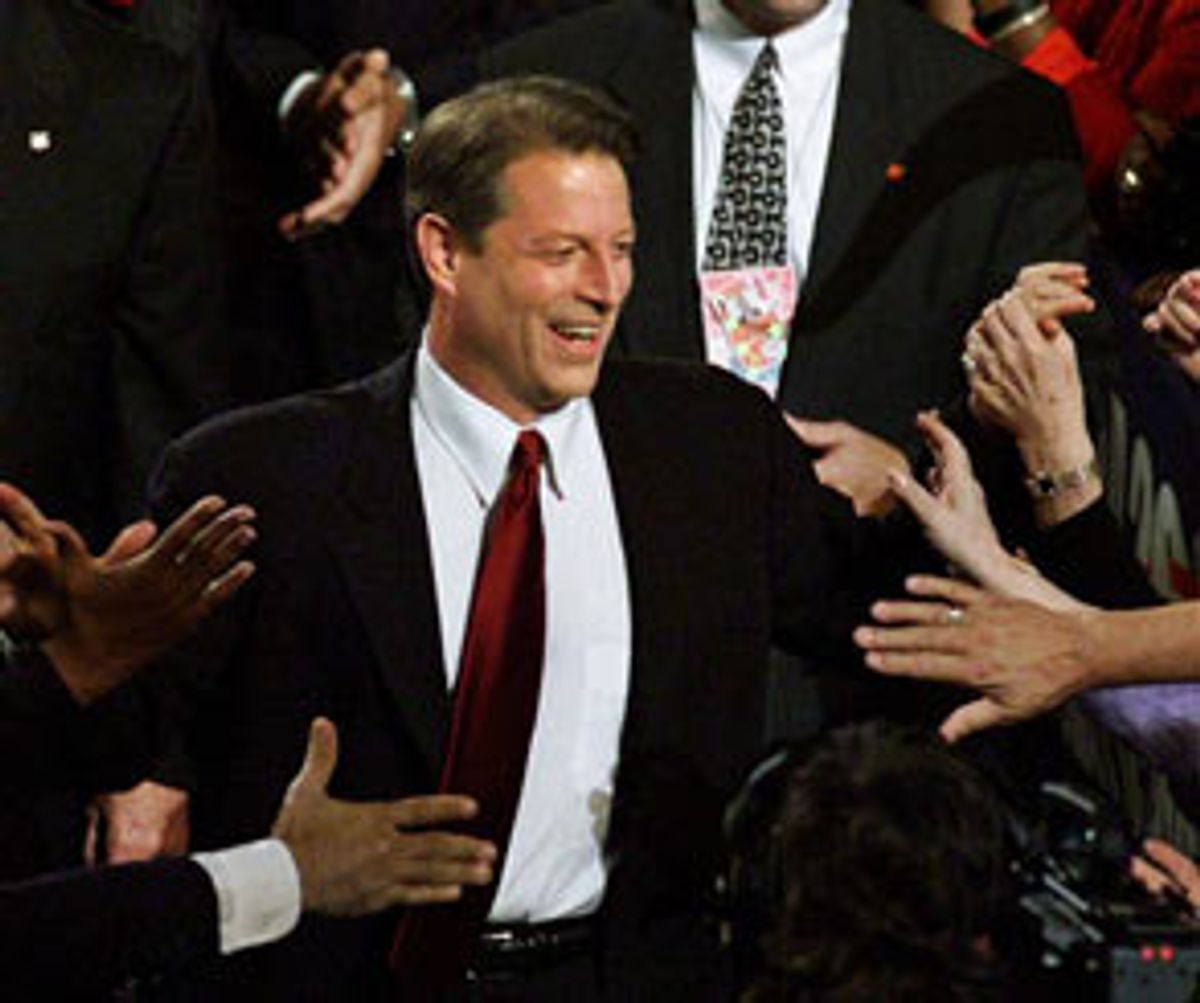 Al Gore may be the most relentlessly unmusical speaker in American political life. So it was startling to hear the emotional and intellectual pitch of his nomination acceptance speech Thursday night set so affectingly by an old square-dance tune, an atypical anthem for a modern campaign played by a decidedly un-slick band of teenage fiddle students accompanied by virtuoso Mark O'Connor.

Opening the climactic segment of the Democrats' prime-time medicine show, the recorded voice of Gore's late father recalled competitive fiddle-playing among Tennessee pols early in the century. Then the kids launched into "Soldier's Joy," a propulsive, spirit-lifting number first printed during the American Revolution. Not just any fiddle tune, "Soldier's Joy" was by the 1930s one of the country's musical unifiers: Depression-era folklorists recorded it played by black and white musicians alike through the Southern mountains, in California labor camps and in New England Grange halls.

"I stand here tonight as my own man" was the sound bite played over and over after Gore's speech. But that musical introduction suggested less a declaration of independence than of reconnection: a recasting of Gore as heir to door-to-door populism. That reconnection was emphasized a few minutes later when journalist David Halberstam, a family friend, recalled covering the Tennessee Senate while the elder Gore was in Washington, when those campaigns consisted entirely of the candidate's wife and a reporter driving backwoods counties together.

When Gore himself evoked the town meetings he held as a congressman, and promised to "put our democracy back in your hands, and get all the special-interest money -- all of it -- out of our democracy," he conjured not just the present campaign-finance crisis but a vigorous democratic past that might be revived.

It was all just image-making, of course; focus groups and fundraising go on unabated among the Democrats as among the Republicans. The past is past, and was never that clean. But as image-making, it was effective.

And though the ostensible purpose of the convention was to reinvent Al Gore as the anti-Clinton -- family man instead of philanderer, anguished public conscience instead of corrupt private egotist -- on Thursday, the Democrats managed something equally important: They persuasively made a case for Al Gore as the anti-Bush.

Start with the family snapshots and biographical interlude from Tipper Gore. At the Republican Convention, Bush in his campaign film and speech deliberately skipped over his teenage and young adult years. It was precisely there that Tipper Gore provided a flood of biographical detail: their youthful romance, the Vietnam War "which we opposed"; Al's decision to enlist anyway because he was afraid someone else from Carthage, Tenn., would get drafted; his reflective retreat to religious study after returning from service in the war.

Not once Thursday night did Tipper -- or anyone else -- mention Bush by name. But the biography's point was vivid: While young George W. Bush was busy doing his "Animal House" act, Al Gore was already contending with the hardest questions life and politics had to offer.

In the speech that followed, Gore picked up the populist theme. "That's the difference in this election. They're for the powerful. We're for the people," he declared. In contrast to Bush's speech -- long on the baby boom generation's rise to responsibility, short on specifics -- Gore was program, program, program to the core: Medicare drug benefits, tax-deductible college tuition, universal preschool. Gore promised programs the way Huey Long promised bridges and highways.

Yet despite the passion of his delivery and the convincing biographical frame, Gore's speech also suggested his most profound weakness as a candidate. Not once did Gore find a way to make listeners complicit in his politics -- or suggest, as Clinton always can, that he and the public are on a common, and common-sense, journey. Gore offered no unified vision, no dramatic departures. His rhetoric may be populist but his politics are patrician: "I will invest far more in our schools." "I'll fight for tax cuts that go to the right people." "I will keep America's defenses strong." It seemed to be all about the body politic as a passive receptacle for wise policy.

This disconnect between rhetoric and reality also infects Gore's campaign at the strategic level. For instance, before travelling to Los Angeles last week, Gore joined President Clinton in Monroe, Mich., halfway between Toledo, Ohio, and Detroit -- an area that is prospering in the Clinton-era economy. But on the key level of organization, Bush is far ahead in Michigan, thanks in part to the support of Republican Gov. John Engler and in part to having already fought a contentious GOP primary. In newspapers all over the state, Democrats last week worried aloud that the Gore campaign was not directing enough resources in their direction.

And in Michigan, as in other states, Gore faces another problem: the disconnect between his current populist voice and the reality of a political career marked -- like his vice presidential nominee Joseph Lieberman -- by making his most important deals with the most conservative wings of his party. So now the Democratic constituencies he needs to win in places like Michigan -- organized labor and African-Americans -- are having to swallow Gore's and Lieberman's pre-populist stands on trade, on school vouchers, on affirmative action.

African-American Democrats make no effort to hide their alarm. "There is not enough energy to get out the vote" among African-Americans, Rep. Eleanor Holmes Norton, Washington's non-voting House delegate, declared last week -- in sentiments shared by Rep. John Conyers and other influential black officials.

Organized labor, too, has a hard case to make to its members for enthusiastic support of presidential and vice presidential candidates who both pay lip service to unions while pursuing trade policies that undermine the movement.

But such pragmatic concerns stayed in the green room on Thursday night.

This may or may not have been the speech of Al Gore's life -- but it was a speech about re-casting his life. He is still a Senator's prep-school-and-Harvard educated son. But on Thursday he found a way to turn that into an asset. You can have the Bush family legacy, Gore implicitly offered -- generations of privilege, climaxing in George W.'s long-ago evasion of Vietnam service and more recent evasion of that memory. Or you can have me: my fiddle-playing father born in Possum Hollow, my pioneering lawyer mother, my voluntary enlistment in a war I opposed, my policy-wonking obsessions. Voters: Choose your dynasty!