And that's just one of the many developments CBS is censoring from its much-hyped "Reality TV" show. 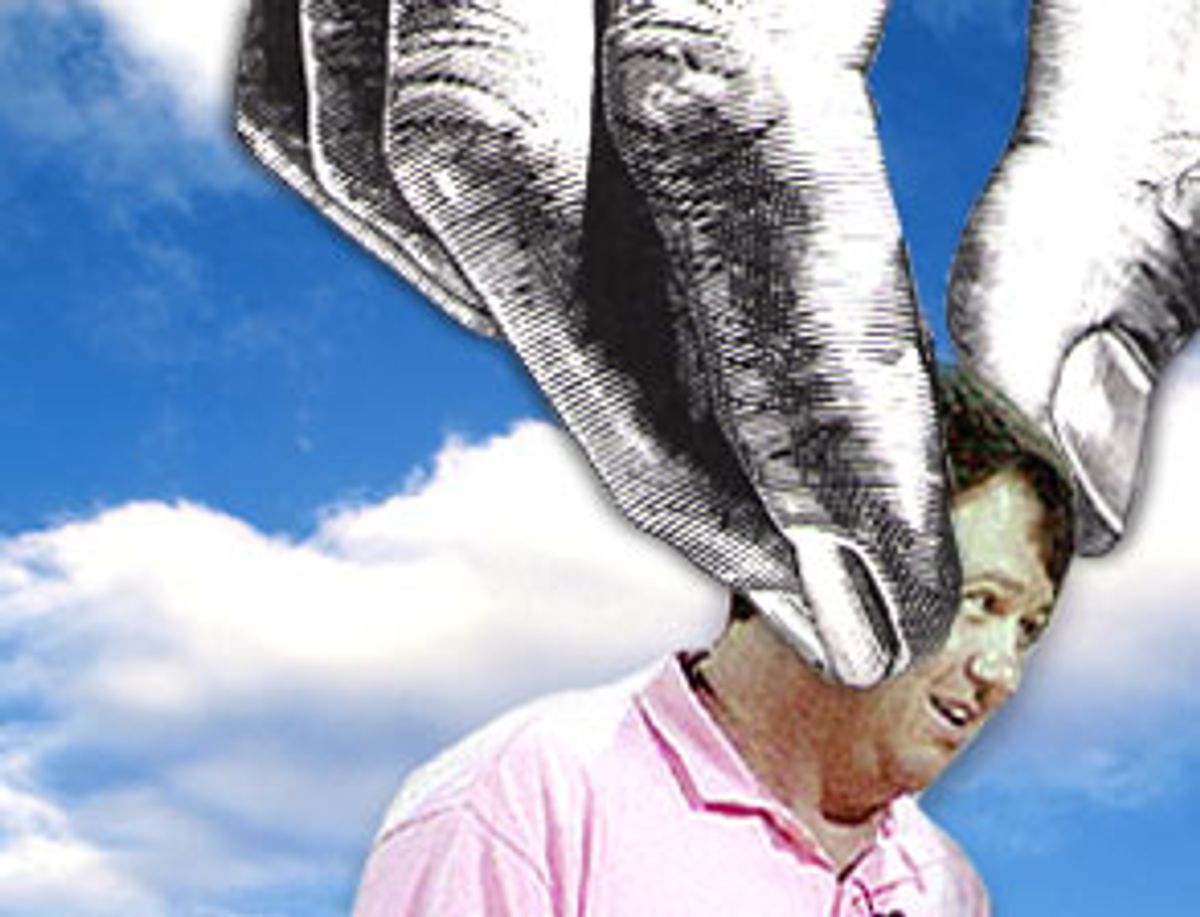 Last Monday night in the "Big Brother" house, George the affable roofer almost led his seven housemates in a mass walkout of the show.

No, you didn't miss an episode. CBS just didn't want to let you know that its much-hyped reality series was on the verge of an abrupt and unscripted end.

Love it, hate it or be uncomfortably compelled by it, the one thing most people have been taking for granted about "Big Brother" is that, contrived as the situation may be, what we see on the screen is what is really happening.

In fact, the producers of the show must distill dozens of hours of potentially airable footage down to about 22 minutes of programming each day. (The show is generally on six nights a week.) It's a formidable editing challenge -- ideally, the producers are boiling down hours of happenstance into minutes of television that must be both interesting and true.

This is all nothing different from what television news reports do -- edit footage and rearrange it where necessary to make the program coherent and entertaining.

But "Big Brother" is giving us a rare opportunity to see exactly what decisions are being made. CBS has set up a 24-hour-a-day real-time webcast that lets us watch the story as it unfolds. On the Web you can see any of four live feeds from the house. (Devotees have learned how to find a feed from the control room, one from the chicken coop and one that shows all four house feeds at once.)

The only thing the webcast doesn't show is what the housemates say in the "Red Room," where they talk privately to show producers.

The result is an unprecedented opportunity to see how editing changes reality.

And the evidence isn't pretty.

There is constant distortion of events. Crucial information -- information that would change a reasonable person's interpretation of an event -- is withheld from viewers. And a lot of inherently interesting developments, like the unease that led to the unlikely evolution of George into a revolutionary, are simply being suppressed.

I've been watching the Web feeds with some regularity since the show started, and taking notes since the first week. My very first note: "Lawyer: 'If you edit it right, everything we do could look thrilling.'" That was Curtis, the understatedly intelligent 28-year-old attorney, talking.

Since he said that, I've seen that "Big Brother" can also edit it wrong. If the producers want to, anything the residents do can be made to look like something other than it was -- or be as obliterated from history as the archival news stories Winston Smith rewrote for the original Big Brother.

Especially, it seems, if it might make Big Brother look bad.

On Aug. 14, Big Brother, in one of its many disembodied voices, had told the housemates they were commanded to put on a comedy roast. The producers offer up one of these commands -- they call them "challenges" -- every day or so. It's rarely made explicit on the television broadcast that the housemates are doing something they were told to do instead of something they spontaneously decided on.

So, for example, on a recent show, the announcer said, "The houseguests cool off with a game of water basketball." The voice doesn't explain that the residents were ordered to do so; it also doesn't explain that some of the residents don't like the pool. Cassandra has been in the pool exactly twice, both on demand. When her recently dreaded hair gets wet, it takes her much of a frustrating day to fix it again.

On television, the roast was made to look like the housemates' idea. The AOL-sponsored Web site is considerably less coy: If you read it, you can find out that the residents didn't come up with the idea or the jokes. Two weeks earlier, they'd had an identical challenge to roast nominees Jordan and Curtis with canned jokes, and resisted; the jokes had been milder than expected, so this time the housemates were more comfortable.

Then they saw the material.

None of the jokes were particularly funny, and several in particular shook the housemates. In one joke, the regal Cassandra, who had remarked once that she hadn't dated the previous year, was lumped with avowed 25-year-old virgin Brittany: "I guess technically, there are two virgins in the house."

In another, the demure beauty queen Jamie was made to make a risqui remark about Josh's cuddlings with Brittany: "In the love bed, he gets Brittany off." And there was a joke about unhappy housewife Karen's husband.

But the one that fomented the rebellion was given to Eddie, the one-legged basketball player from Long Island. The joke was directed at Josh, but the people it upset were the two remaining twentysomething women in the house, whom, with departed stripper Jordan, it identified as three "bitches" Josh had chased. The punch line was, no wonder the dog (a female pug introduced to the house half a week earlier) hides under the couch.

After the roast, Brittany went to the bedroom and cried. Dignified Cassandra fumed quietly about the producers' use of "the 'B word.'" Jamie -- who on July 22 told a housemate she wasn't worried about CBS editing footage to deliberately distort what happened in the house because "CBS is a noble network" -- told everyone that the joke would surely be broadcast as though it were just Eddie's; she was right.

Curtis went into the Red Room, where housemates can (and once a day, must) talk privately with the disembodied voice of the producers. The residents lucked out having a lawyer around. He asked about the group's contracts. (Cassandra told Curtis that her lawyer had advised her not to sign: "They'll own you." Curtis replied he'd "used a fool for a lawyer" when it came to going over the contract -- himself.)

He wanted to know if the contracts permitted BB to divulge things said confidentially in that room to others still in the house. The housemates have agreed that they will not tell each other whom they are nominating for banishment every two weeks; now they're worried CBS will force them to watch the supposedly confidential Red Room nominations -- or even some of their answers to questions about how they feel about each other. Big Brother gave Curtis only vague responses to his questions.

This was the setting for the unexpected walk-out proposal by George. The 41-year-old Rockford, Ill., roofer is most often seen on television (and on the feed) joking, clucking like a chicken and talking about his family. Suddenly, he became Spartacus.

His idea was an utterly unique labor revolt: If they couldn't trust BB to portray them honestly on television, the contestants could simply end the show by agreeing to all walk out together.

He was talking to Brittany, who had pulled herself together and joined him in the dim light of their tiny enclosed yard. It was after 10:30 at night. George has appointed himself a father figure to the 25-year-old chemist, and he was worried about her: She assured him she was all right. He said that, as a father, he worried about the whole situation.

"You know what I'm trying to say? I'm just saying we should all think about what we got ourselves into here."

Brittany admitted she feared the show was "trying to make us look like idiots, for ratings." Now that she believed that, she said, "I don't want to be here."

George repeated a theme diplomatic Cassandra has often rung: "You know who has control here."

George's first suggestion was the television equivalent of a sit-down strike: "So we have to talk about nothing at all."

Brittany thought it would be better if they simply stopped talking: "I don't want to be part of a show that calls women 'bitches' and makes fun of Cassandra not having sex in a year." No one had to say that this would be as difficult on the housemates as on the producers. All the housemates have to occupy their brains is each other. They can't wander into the jungle like the "Survivor" folks.

That's when George suggested they all walk out of the house together. Everyone understands that his family could use the money -- the $500,000 CBS will reward to the last resident of the house -- but he not only said he was in for it, he suggested calling a meeting to discuss it.

"I hadn't thought of all of us leaving," Brittany mused.

In any event, there was no walkout. George and Brittany realized that it would be hard on some residents, like Eddie, who has made no bones about wanting to win the money to pay off his family's medical debts.

And conflict-averse Curtis suggested instead that they have a meal and see how they felt afterward. After the meal, they decided to stick it out -- and be more suspicious.

If "Big Brother" is about what being in a constrained situation reveals about ordinary people, this was the most surprising revelation about what George is made of. It's certainly the most interesting, most dramatic turn of events in the "Big Brother" house, the moment the contestants realized that CBS is more to be taken as an adversary than a host: That Rubicon crossed, they haven't been as trusting since.

If you saw the broadcasts, you know this is how CBS spun that night:

Lowlights of the roast were shown, including the "bitches" joke. Only a few choppy moments of the residents' being upset was shown. Then we got footage of Eddie in the Red Room saying that he didn't think everyone should take the jokes so seriously -- they knew what they were getting into. He was not shown to say the joke wasn't his idea.

And the discussion between the two mutineers by the garden? Their distrust was only suggested: We saw Brittany telling George that she'd responded to a Red Room interrogator that, if she had to change her vote, she'd vote for George, since he'd gotten no other nominations and it would have effectively made her vote harmless.

But it gave no indication of an incipient revolt.

The context of Curtis demanding and failing to receive assurances from the producers that confidential Red Room conversations would remain confidential was eliminated, making Brittany look merely paranoid. The broadcast showed George shushing her: "Don't worry about it!"

A month and a half of minor and less-minor distortions add up, and they can't be summarized in one article. But here are just a few more things you might have liked to know:

Martha Soukup is a Nebula-award-winning science fiction writer. Her new short-story collection is "The Arbitrary Placement of Walls." She does her daily eavesdropping in San Francisco.