Are British bobbies reading your e-mail?

While Americans gnash their teeth about the FBI's Carnivore spying technology, U.K. legislators pass a law that could let cops read your messages. 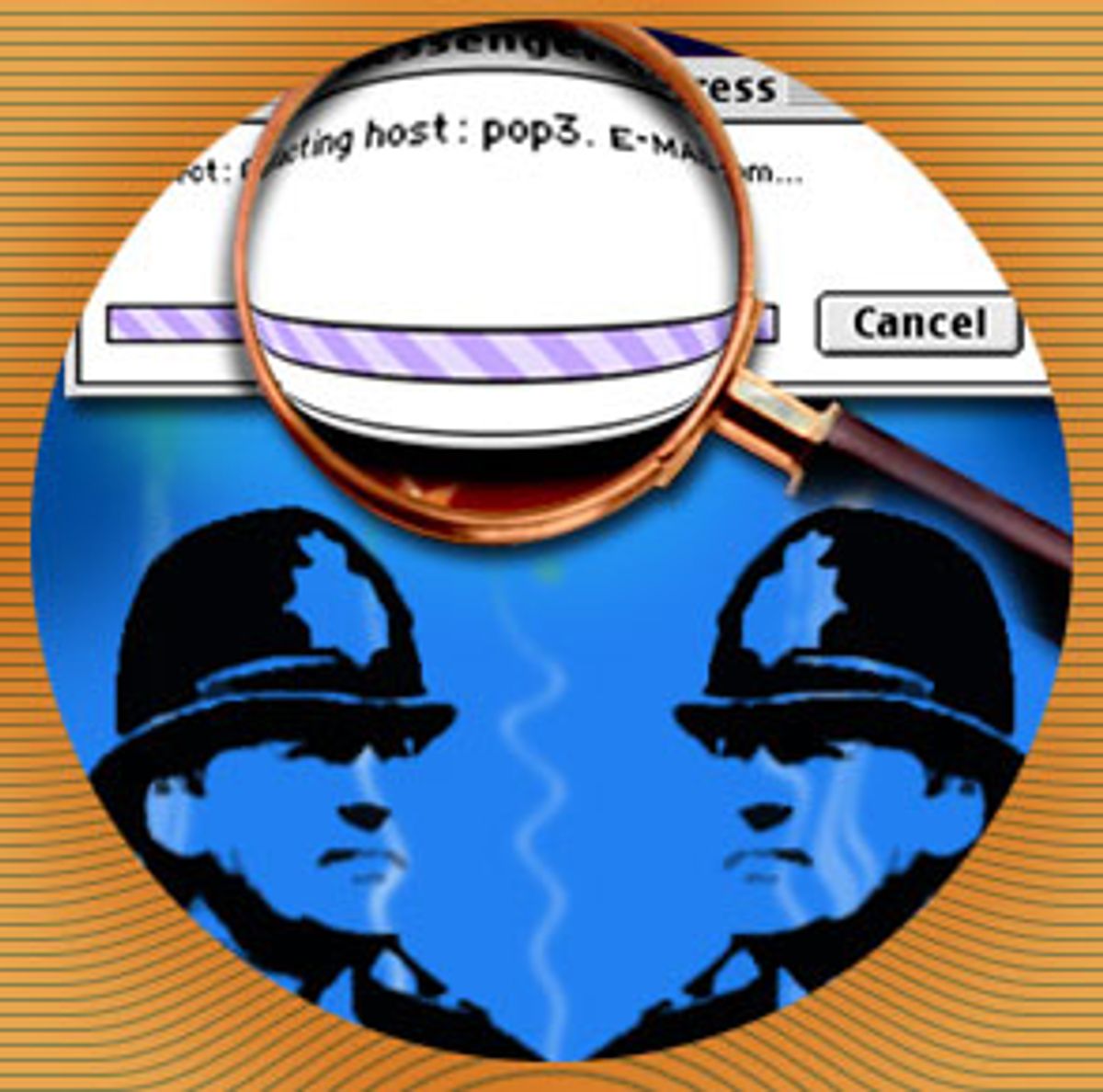 Americans are used to thinking of Britain as the source from which most of the principles of our democracy flow, a country for which these principles are so innate it doesn't even need a written Constitution. The reality is increasingly different.

Compare and contrast. On July 14, the Wall Street Journal broke the news that the FBI was using an Internet wiretapping system known as Carnivore to intercept and access e-mail. By July 24, FBI assistant director Donald Kerr was explaining Carnivore to Congress. By Aug. 15, a federal appeals court had ruled, in response to a suit from the Electronic Privacy Information Center and others, that law enforcement officers must get a Fourth Amendment search warrant before they can have access to "packets from which call information has not been stripped." The ruling, it seems, makes Carnivore illegal. In Britain, on the other hand, on July 28 the Regulation of Investigatory Powers Act (RIP) became law, requiring all Internet service providers to install and maintain interception equipment for the benefit of law enforcement. Yes, agents will have to get a warrant. But that warrant will be issued by the politician at the head of the Home Office (Britain's equivalent to the Justice Department), not by a judge.

The government mantra is that the new legislation merely updates existing laws for new technology. British law enforcement folk, just like their American counterparts, argue that new technology such as strong encryption hinders their ability to investigate serious crimes, and that therefore they must have guaranteed access to all electronic communications. In the United States, this thinking has led the Clinton administration to push several policies: key escrow, the practice of storing a copy of every user's decryption key; restrictions on the deployment of strong cryptography through the International Traffic in Arms Regulations; and the Digital Telephony Act, which requires a wiretap-friendly design for telephone networks.

In mid-May, the news broke that the security service MI5 is building a $37 million facility that will have the power to monitor all e-mail sent and received in Britain. Under this scheme, Internet service providers like Freeserve, Demon Internet, America Online and others who serve U.K. customers will be required to hard-wire their systems into the monitoring center. Given that messages are routed across the Internet without regard to geography, and that many Americans and Europeans communicate with people in the United Kingdom, this is more than a matter of British national interest: The e-mail they'll be reading could be yours.

RIP's provisions regarding encryption keys slide right into this surveillance scenario. If British law enforcement officers want access to your encrypted data -- and in our electronic era that may be anything from your love letters to the details of your last medical exam -- they can throw you in jail for up to five years if you can't or won't produce the necessary key and can't produce a good reason why. Under some circumstances, not specified, they can slap a secrecy notice on you, under which you will not be allowed to tell anyone except your lawyer that your e-mail is being decoded. Your innocent, confiding correspondents won't know. These particular provisions have been watered down a bit from the draft legislation, which reversed the burden of proof so that if you refused to produce your key you could be presumed guilty.

In a way, this is all sadly less surprising than it might be. British subjects' right to remain silent without self-incrimination -- what Americans call taking the Fifth -- was done away with in 1994 by the Criminal Justice and Public Order Act, which also included restrictions on the right to peacefully assemble. In addition, the 1996 Criminal Procedures Act significantly altered the regime for the disclosure of evidence. For the first time in English law, defendants are now required to disclose the basis of their defense, while the prosecution is given greater discretion than it had before. The upshot, according to Justice, a lobbying organization, is to place a great deal of discretion in the hands of the police, who may make errors about what is relevant information. According to Justice, this system has been controversial enough that the entire criminal justice system is now under government review.

The theoretical savior in this mix is the European Convention on Human Rights, which comes into effect in October and includes principles such as freedom of speech and the right to privacy. Relying on a court most people in Britain still perceive as foreign, however, isn't much comfort, especially since it can take five years to get a case to the European Court. Oddly, the British government used the ECHR as a justification for rushing RIP through: The Home Office claimed that some prosecutions would have to be dropped if RIP didn't get through before October.

You'd think that claim would give it a clue that what it is doing is slowly but surely eating away at the fabric of one of the world's oldest continuous democracies. In terms of the economic future Tony Blair's government claims to care about so much -- his current mantra is that he wants to make Britain the "best place to do e-commerce" -- RIP is even more foolish. A British Chamber of Commerce report, published in mid-June, estimates RIP's direct cost to ISPs at $964 million, and the overall cost to Britain as businesses relocate overseas at $52 billion over five years.

For Americans, RIP should serve as a warning. Don't get too comfortable just because Carnivore failed in the courts. The United States and the United Kingdom have traveled in lock step on restricting cryptography and other Net freedoms, and the legislation they try to pass in one place inevitably pops up in the other, though not always in the same form. And they keep trying.