A bill to make the practice illegal puts politicians in the hot spot between the timber industry and the increasingly tree-friendly public. 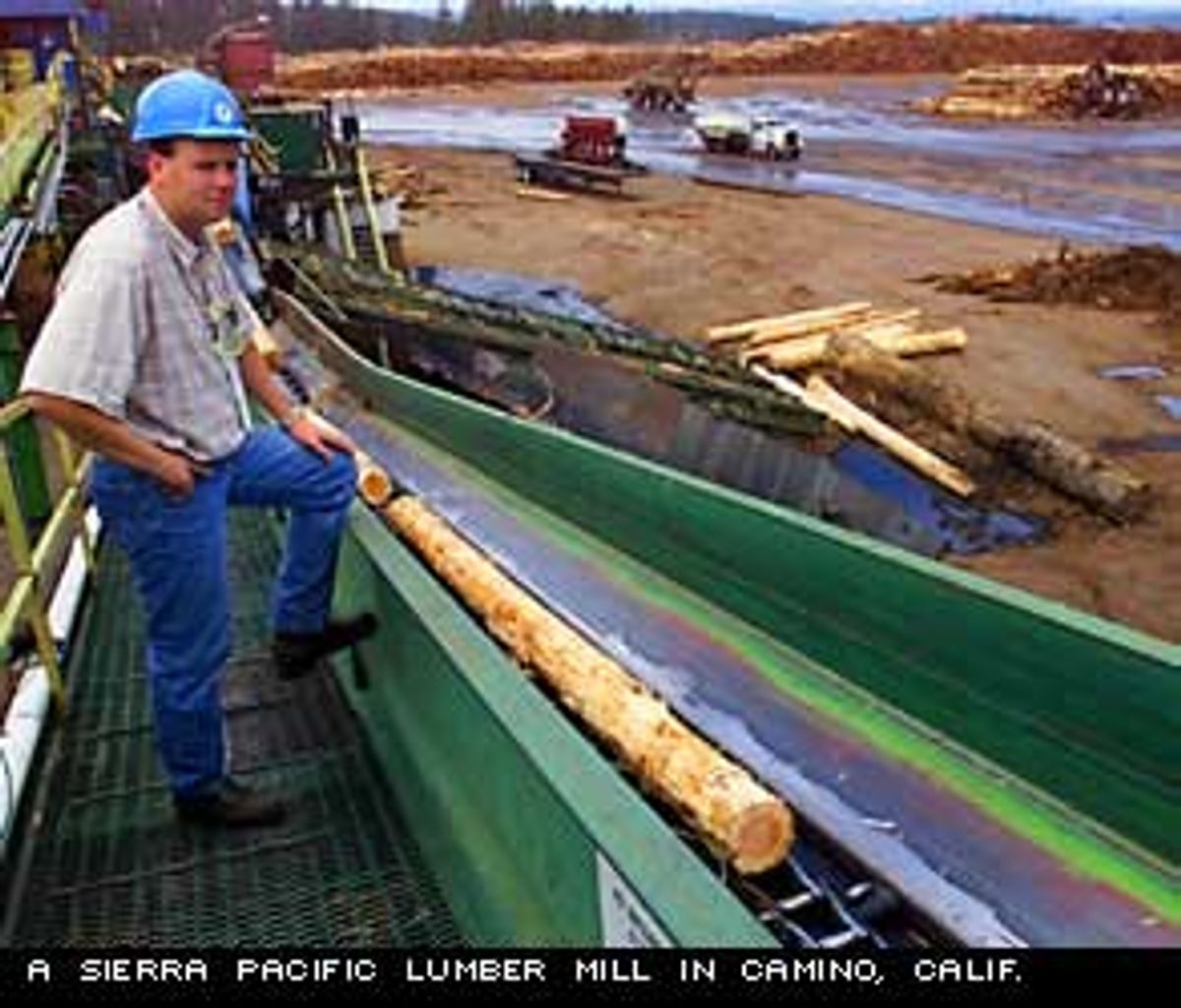 In a major environmental development, California may soon ban clear-cutting in the state's forests. Legislation mandating a temporary ban passed a crucial hurdle Tuesday when the state Senate Natural Resources and Wildlife Commitee voted 5-4 to approve the bill. Meanwhile, California's biggest logger, Sierra Pacific Industries, has responded to public outcry against clear-cutting by announcing its own 30-day suspension on some operations.

Clear-cutting is a logging practice that involves felling every tree on a given plot of land, scraping the land bare, spraying it with herbicides and replanting it as a tree plantation. Timber industry officials say that clear-cutting makes for healthier, more productive forests. Most environmentalists counter that the higher production comes at great cost to wildlife, habitat and the water supplies humans and animals depend upon.

The ban the California Legislature is considering would halt all clear-cutting in the state, including on private land, beginning Jan. 1. Clear-cutting could not resume until an independent scientific study of its environmental and economic effects had been conducted and the state Legislature voted up or down on the resumption.

Such a moratorium would be unprecedented in the United States and likely have broader effects. Home to some of the greatest natural beauty in the nation, California has a deserved reputation as an environmental trendsetter. Tougher auto emissions standards and coastal protection regulations are just two policies that began in California and were adopted elsewhere.

Clear-cutting has been exploding in California in recent years largely because of one company: Sierra Pacific Industries. After a decade of land purchases, mainly in the Sierra Nevada, the company owns 1.5 million acres in California, 1 percent of the state's area. While Sierra Pacific's holdings doubled over the past 10 years, its clear-cutting increased by a factor of 24, to nearly 24,000 acres a year. The company has declared plans to clear-cut 70 percent of its land over the next 70 to 80 years.

And despite its self-imposed partial moratorium on the practice, the company still defends it. Tim Feller, a spokesman for Sierra Pacific, told Salon that clear-cutting is no more environmentally damaging than is selective logging, and that claims to the contrary are "hot-button rhetoric" unsupported by scientific evidence.

At the state capital, prospects for the moratorium measure, Assembly bill 717, remain unclear despite Tuesday's victory for environmentalists. There is political and economic muscle on both sides. The bill was introduced Aug. 9 by the second-ranking Democrat in the state Assembly, Speaker Pro-tem Fred Keeley, who declared, "The time for a moratorium is now. It doesn't make sense to study our native forests after they're gone." Other powerful Democrats also back the bill, including Senate Majority Leader John Burton and Natural Resource Committee chairman Tom Hayden.

The Sierra Club and other environmental organizations have promised an intense grass-roots mobilization like the one that forced Sierra Pacific's partial moratorium. One hundred local businesses from the Sierra Nevada mountain region have endorsed the moratorium.

On the other hand, the timber industry and many conservative lawmakers oppose the measure. David Bischel, president of the California Forestry Association, told Salon the industry is "very much opposed to this legislation because it would create a huge economic crisis in California without any environmental rationale."

He asserted that the legislation would restrict not only clear-cutting of forests -- what the industry terms "even-age management" -- but also uneven-age management. This stipulation would force small loggers out of business and damage the $12 billion wood products industry, Bischel said, adding, "We already have the most powerful environmental restrictions in the nation."

Democratic Gov. Gray Davis has not taken a public position on the clear-cutting ban but seems unlikely to support it. Environmentalists say Davis balked during negotiations in June over whether to include an earlier, milder version of A.B. 717 in the year's state budget. Keeley, state Sen. Byron Sher and other backers refused to dilute or abandon the reform bill, which they had spent two years advancing through the Legislature. The stalemate led Davis to remove funding for the bill from the budget. Supporters then decided to bring the bill back in a simpler, more daring form.

Davis faces pressure both from environmentalists, who are confident they have a winning public issue, and from a timber industry that has contributed heavily to his campaign coffers. Sierra Pacific hosted a fundraiser for the governor on July 13, 1999 -- the same day Davis' administration issued logging rules that both environmentalists and the federal government's National Marine Fisheries Service complained were too weak to protect coho salmon and other threatened species. The fundraiser netted Davis $129,000 in contributions from the timber industry. Five months later, Davis appointed Sierra Pacific executive Mark Bosetti to the state Board of Forestry.

In June, when Davis' office was asked how Californians could be confident Davis would fairly balance environmental and timber-industry arguments, spokesman Byron Tucker replied, "You're making a connection between campaign contributions a year ago and a decision being made now? Clear-cutting is legal in California, so what's the beef?"

But clear-cutting has been generating more and more public opposition. Sierra Pacific's logging near Big Trees State Park sparked local demonstrations and high-profile coverage by the San Francisco Chronicle, the Los Angeles Times and CNN. On July 24, the company announced it would halt all clear-cutting in the area for 30 days while it modified the project "in response to some of the concerns of Calaveras County residents."

Those opposed to clear-cutting celebrated the partial ban, but weren't satisfied. Sierra Pacific proposed changing the size and appearance of the clear-cuts and expanding water-quality monitoring after the logging was finished. Local activist Warren Alford dismissed those modifications as a transparent effort to co-opt opposition. Moreover, noted Alford, Sierra Pacific's moratorium applied only to new logging. Since the company had already clear-cut about one-fourth of its targeted area, it has remained busy during its moratorium period hauling away the freshly harvested timber. Last Tuesday afternoon, this reporter watched seven trucks loaded with logs drive through the nearby town of Arnold.

Sierra Pacific's suspension of logging at Big Trees ends Monday. But it could then face a legislatively imposed moratorium on all of its clear-cutting operations. Given the stakes, Keeley acknowledges it won't be easy to win passage of his bill or get it signed by a governor who sees forestry issues through an industry-friendly lens. As Keeley puts it, to Davis, "forestry is part of agriculture. Trees are just big, tall crops."

But politicians of all stripes may be leery of crossing public sentiment on the clear-cutting issue. Many Californians seem surprised to learn that clear-cutting is legal at all in their state and if environmentalists can focus enough media and public attention on the possibility of a moratorium, lawmakers may find it difficult to oppose the idea.

"I think members will support the bill when they learn about the tremendous explosion in rates of clear-cutting in the Sierra and the risk it poses to both the economic engine of many Sierra counties and California's watersheds," says Keeley. "I'm responding to a groundswell of concern from a unique coalition of rural businesses, local elected officials and forestland owners who fear their communities will be devastated by unsustainable timber practices."

In any case, the issue will be decided soon. The moratorium must pass both houses of the Legislature by the end of the session, on Aug. 31, or it dies. Davis then has until Dec. 31 to sign it or not.