Unsafe at any speed!

I drove a Corvair and lived to tell the tale. 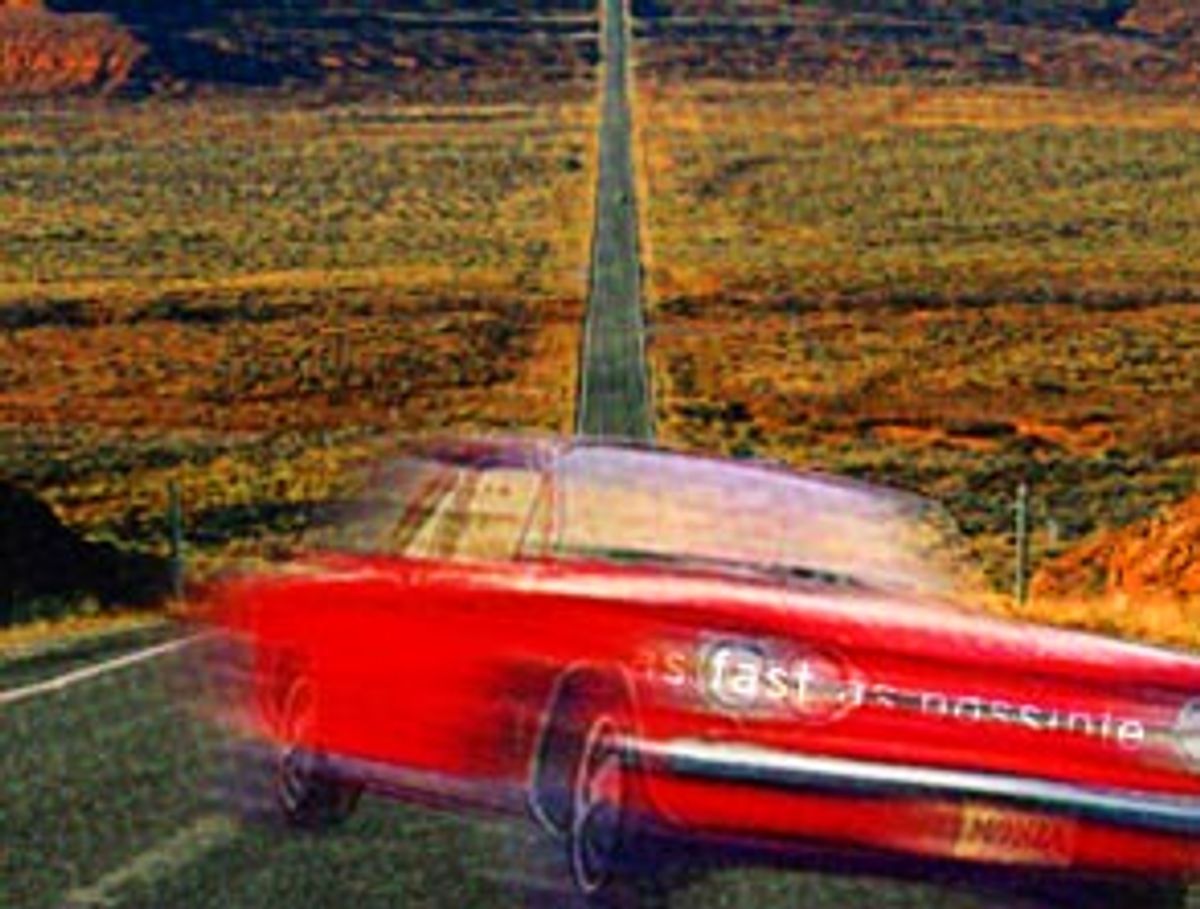 It's summertime and the open road calls.

My friend just bought a new car and while that new-car smell truly is vaguely narcotic, it does not interest me. Sure, new cars are great, and lucky are the drivers who trade in their old wheels for a new model every 2.5 years. I am not one of those lucky drivers.

My first car was a Corvair, the very vehicle that made Ralph Nader famous as the subject of his book "Unsafe at Any Speed!" Just as bittersweet memories of the shiny newness of first love cast a long shadow, my relationships with post-Corvair vehicles have never provided quite the pure adrenaline rush I experienced with Her. But let's start, as everything must, at the beginning.

I love to drive.

My romance with the road was no doubt forged by the epic vacation journeys of my childhood, with six kids and two adults crammed into a wood-paneled Country Squire wagon. The lucky ones would luxuriate on the mattresses and pillows my father used to line the "way back" in the futile hope that his quarrelsome offspring would be lulled into a nearly catatonic state for the entire journey.

No such luck. One of my father's favorite lines was: "This is MY vacation, DAMN IT!" All of my father's rants were delivered at full bellow, in a vain attempt to stem the rising tide of pinching, teasing, hitting and general mayhem resulting from six kids and, say, five hours of scaling treacherous mountain inclines in near-monsoon conditions.

And look, Ma! No seat belts! Nobody used 'em back in the good old/bad old days. The miracle is that we're all still alive to tell the tale.

What's even more remarkable is that I survived my '65 Corvair -- unsafe at any speed, two doors, three speeds, engine in the back and nothing up front but a trunk with a cinder block in it.

My Corvair was a hand-me-down from a cousin whose indifference to the car -- and her reluctance to drive it -- kept it preserved in almost pristine condition. I was 17 on the day I first laid eyes on her jaunty lines and caressed her bare metal steering wheel.

I was not indifferent. I was not reluctant. I was immediately smitten.

While I never endured racial profiling as a motorist, "longhaired kids in weird car" profiling soon became a fact of life. My car was a moving magnet for unwanted police attention, exerting her irresistible pull on unmarked cop cars prowling municipalities throughout central Jersey.

Paranoia was my copilot. Sometimes my car and I would enjoy a brief and balmy period of legality. But throughout the course of our relationship, it was more often the case that we were overdue for inspection, or missing a headlight or a muffler, or otherwise advertising our blatantly illegal status.

The Corvair had a whimsical propensity to throw fan belts, capriciously halt all forward motion or thuddingly announce simultaneous flat tires. Her predilection for unpredictable mechanical failures contributed greatly to my ability to imagine disaster -- already honed to a fine point, thanks to mandatory in-school viewing of gore-filled driver's ed filmstrips.

One night, after a party, a friend started a rolling fearfest when she exhaled just long enough to explain that she felt as if "all the tires were slowly losing air or the steering was going." As I piloted us over ghostly, ribbonlike roads, the car sputtered along in her familiar yet suddenly sinister manner, and I became equally convinced that we were encased in nothing less than a rattling deathtrap of fiery doom. We pulled over at least seven times to peer at the tires (vague, circular blobs by the weak light of the waning moon) and reassure ourselves that they were still round, rather than the razor-blade- and roofing-nail-studded pancakes we had so vividly pictured them to be.

The logic behind the fits and starts of this particular exercise was difficult to convey to the irritable state trooper who pulled me over and querulously demanded, "What in the hell seems to be wrong with your tires, young lady?"

As with most first loves, my relationship with my Corvair was a shifting pastiche of fierce affection and deep-seated hatred -- depending upon whether her engine turned over with a happy roar or sullenly refused to cooperate. And in the end, our passion was not enough to sustain an ongoing relationship.

She'd endured a lot at my hands, God knows, including the time I savagely ripped the turn signal stalk from the steering column twice in one day after six or seven fruitless attempts at fixing a maddeningly persistent short. The final indignity, however, was the time I used bathtub caulking in an ill-advised attempt at fixing an infuriating leak from the windshield.

This deeply offended my mechanic, a taciturn member of a deluded subculture of Corvair aficionados. He picked mournfully at the caking caulk with a fingernail while mumbling, "I'm not gonna ask, but I'd sure like to know why." Then he informed me that he "didn't have time this year" to put in the new clutch I needed.

I chose a fellow equally passionate about Corvairs when I finally sold the car during a college slump, for the paltry sum of $100, after she had sat, forlorn and unstartable, in an alley for more than six months.

Her new owner, one of about six people -- all men who refused to believe that it was I and not "some guy" who had placed a car-for-sale ad -- to respond to my newspaper notice, turned out to be a Corvair freak and a fundamentalist Christian. Not many days passed before I spotted the former love of my life humming down the highway, caulk-free and gleaming, a fish symbol affixed to her back bumper.

Jesus wept and so did I.

I have, of course, had other autos since, including two brand-new vehicles, all with their own peccadilloes, charming and otherwise, but none can compare to my unsafe-at-any-speed Corvair. (One, a '65 Bel Air, came close, but that's a tale for another time.)

And, hey, the VW Beetle made a comeback, didn't it? Move over Faith Popcorn. I have seen the future and it is the Corvair 2002. Break out the cinder blocks and bathtub caulking and await the second coming of the car that put Nader on the map.

Till then, I am content to drive what my daughter terms the "nerd-mobile," a 10-year-old station wagon uniquely suited to the on-street-parking demands of the city.

It has, you see, more than once earned the dubious industry accolade of "vehicle least likely to be stolen."

Trish Boppert is a freelance writer. She lives in Philadelphia.