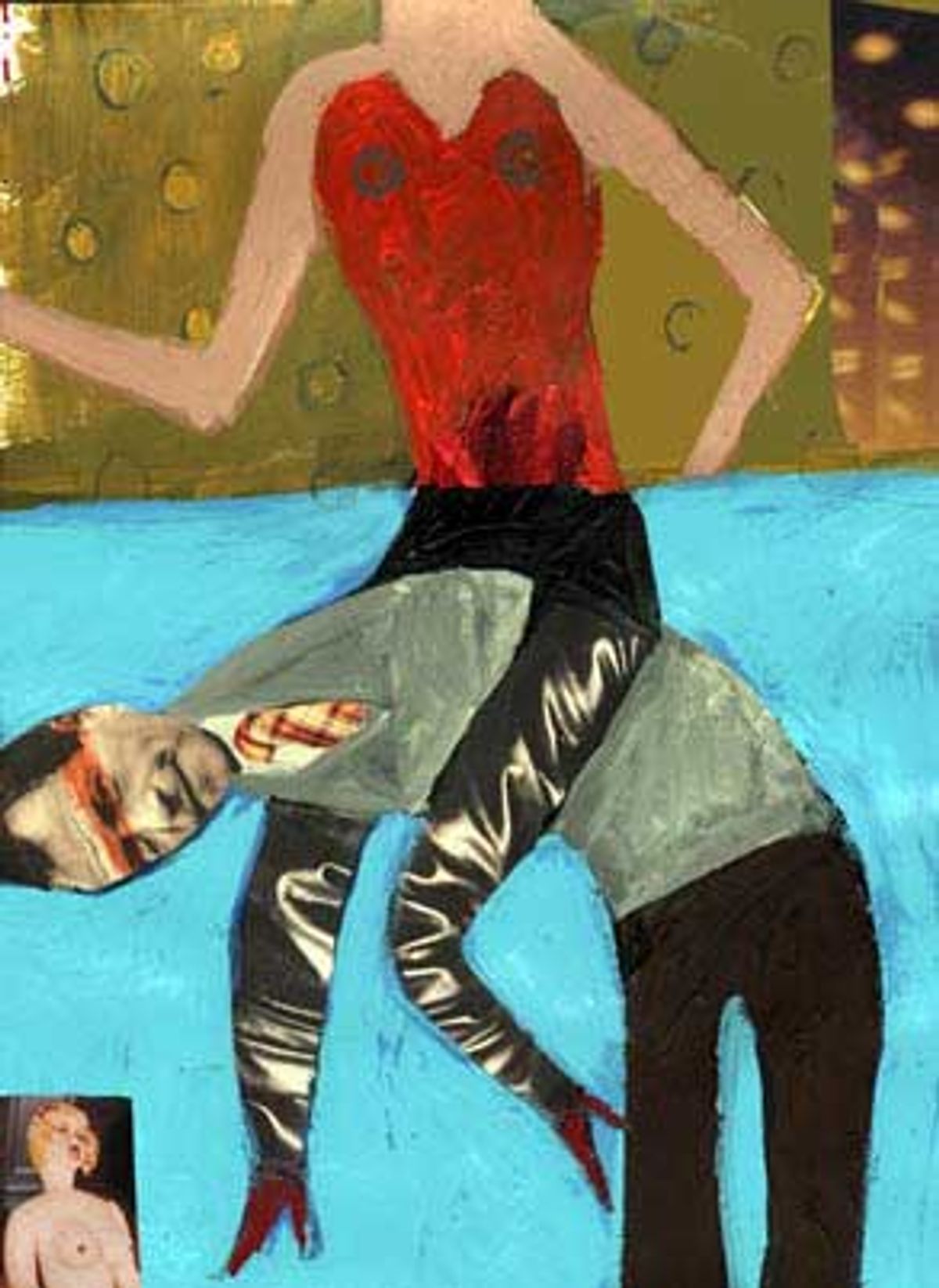 It is after midnight on a Saturday at Hellfire, a 20-year-old fully equipped S/M fetish dungeon in Manhattan's meatpacking district. Most of the naked men shuffling about with penis-in-hand are clean-shaven preppies and Wall Streeters. Naked except for an expensive pair of loafers or a button-down shirt, or merely a high-end watch, these are clearly men of substance; decent upstanding citizens with a penchant for deviance. The dread of running into an acquaintance is overcome by the obsessive need behind the deed.

Which is maybe why the lights are always low at the Hellfire Club.

"Coming here instead of going home proves these guys are trying to fill an emptiness. They're lonely, they are all missing something in their lives. And I'm not just talking about underwear." Tony pauses and laughs at his joke. Darkening, he adds, "I'm here, so I must be some kind of freak too."

Tony, a computer analyst at IBM, could not look less like a freak. He is 27, born in Puerto Rico, transplanted to Manhattan 20 years ago. Tony is 6-foot-1, slim, with mocha-colored skin, wavy black hair and a friendly smile. His Docksiders and cotton leisure wear have a yuppie feel.

"Ready to play?" says Lenny to a young, fat, bored whore in black pleather rigging. Her flesh seeps out. Lenny is wearing only sneakers. He is tall and pudgy and carrying a yellow and black sports bag on his arm. His glasses fog up repeatedly and he smiles as he wipes the lenses on a napkin.

"I love it up the ass," says Fidel, a corporate masseuse by day, and grumpy S/M slave by night. He is naked except for a baggy black leather thong, and a chain around his neck held together with a chunky padlock. He has a strap-on contraption in his hands and he is demonstrating how the rubber dildo fits securely with a tug. "I can't exploit the Internet," Fidel laments, "because it would embarrass my family. They hate what I do, but mostly they're worried friends will find out. And I do run into my corporate massage clients all the time. But I love it too much to give it up. I love golden showers. In one dungeon where I work, I'm known as the community toilet."

With a disgusted grunt Fidel points at a Leslie Nielsen look-alike reclining in a "blow job chair," his pants open, penis exposed. In front of him stands a woman, a 50-ish wiry blond with orange lipstick, sucking on the proffered penis. A circle of men gathers, masturbating to the scene. There is no audible signal but presumably they all climax because the men release flaccid, spent dicks, and the woman is reapplying her lipstick, and the Leslie Nielsen character is zipping his fly. Very matter of factly, he hops down from the oddly shaped chair and hands the woman her pack of cigarettes.

A professional looking lady, about 40, is sitting on a bar stool chatting to some men when she shimmies out of a navy gabardine suit dress, kicks off dark blue pumps and red panties until she is naked. One man stands behind her propping her up, his stomach acting as a headboard, while another man slips in, in front, literally. He lunges and thrusts with no expression on his face, and the usual ring of masturbators collects in a tight throbbing circle. Each man reaches for the woman with his free hand; she is surrounded, and the men switch turns without ever saying a word. A natural pecking order appears as the gangbang finds its rhythm.

At 5 a.m., Fidel carefully packs his toys into a Tommy Hilfiger sports bag and pulls on black jeans, a black polo shirt and black leather loafers. As he walks briskly to his car, a handsome garbage collector hands two big bunches of rhododendrons to a waitress just off her shift from a fashionable restaurant across the street. Fidel revs his 10-year-old BMW, gray with gray interior, and drives home for a change of clothes, and onward to his day job as a masseuse in clean-cut corporate America.

Just as night life is not relegated to nighttime, clean-cut is not necessarily squeaky-clean. Along with the five o'clock shadow comes other werewolf phenomena. Hellfire is only open from 10 p.m. until dawn Thursday through Saturday and it is always filled to the brim, masturbators elbowing one another in the ribs. Manhattan is host to plenty more pleasure dens, all of them bursting with bursting customers.

David, a regular, says: "There are clubs in a few major cities; elsewhere private parties, and associations as well as a frontier-town welcome on the Web." Chicago boasts a Hellfire Club, as does London, fabled home of the original Hellfire. According to Fidel the slave, "The scene in England is much better than here. More sophisticated, more experimental."

Patty Kaplan, creator of the 10-year-old show "Real Sex" for HBO, says that sex as entertainment is "very here to stay." Kaplan has a new show premiering this month called "G-String Divas." For one full year, video cameras were embedded in the walls of a Philadelphia strip club. The results will be segmented into 13 half-hour episodes.

Kaplan says, "Ever since AIDS, people have needed to find other ways to get off, besides penetration. That is not to say that 'G-String Divas' is a show to whack off to. It's more of an educational-titillating-docu-soap."

With the shedding of values along with newfound freedoms, sex as leisure sport is more commonplace than ever. Everywhere, demand far exceeds supply. As the trend grows, one has to ask: What is next? Gravity-free sex? Penetrating the atmospheric black hole?

George, a husband who patronizes fetish clubs, says, "People assume this is a male trip. That's simply not right. Myths are sprung by women's magazines with stories on how to handle it when your man says he wants to try handcuffs. This is tired and false." His wife says, "Sometimes I go with him. I always know where he is and what he's doing, so why should I worry?"

At Hellfire men pay $30 to enter. Women are welcome free. George says, "Everybody knows women can get sex for free anytime." On certain nights, a man can enter for free if his female companion is willing to shave her beaver, and flash the ticket lady at the front door. Nights when slave auctions are held, men buy women and take them to the Heaven section for fun. "But you can't take your slave home for keeps," George says. "It's just a game."

Part of a normal life routine except it's S/M. Pure entertainment. George says, "The only thing to be afraid of is who you'll see. For example, one's shrink, that would be disturbing." Sex expert psychotherapist H. says, "It would be worse to run into a patient."

H. (who prefers to remain anonymous) says it's "all perfectly normal. People are bored and lonely, and at the same time the thrill threshold is always going up. And rather than spend the evening home alone in tighty-whities, jerking off to the Playboy Channel, it's more exciting to go where the action is. It's stimulation. Meanwhile, I can never get anyone to go swing dancing with me."

He continues: "These men are not perverts, they're just regular guys. Men being men. Men with enough awareness to know what they need."

George, sounding indignant, responds. "The inclination to pathologize this behavior makes me sad. We don't ask shrinks to explain why we're writers. Why should they be expected to be heard from here?"

What to do with an empty evening, a tossup between a dance class or a visit to Hellfire? David says, "I've been going to these places for years, all over the world. What I'm looking for is the potential to 'trip,' to merge with this other way of being. To experience more of myself. More of life. If I get nothing else, at least I'm out of my head for a few hours. Furthermore, after a long hard day I don't want to swing dance."

Christina Oxenberg is the author of "Royal Blue" and "Taxi." She lives in New York.