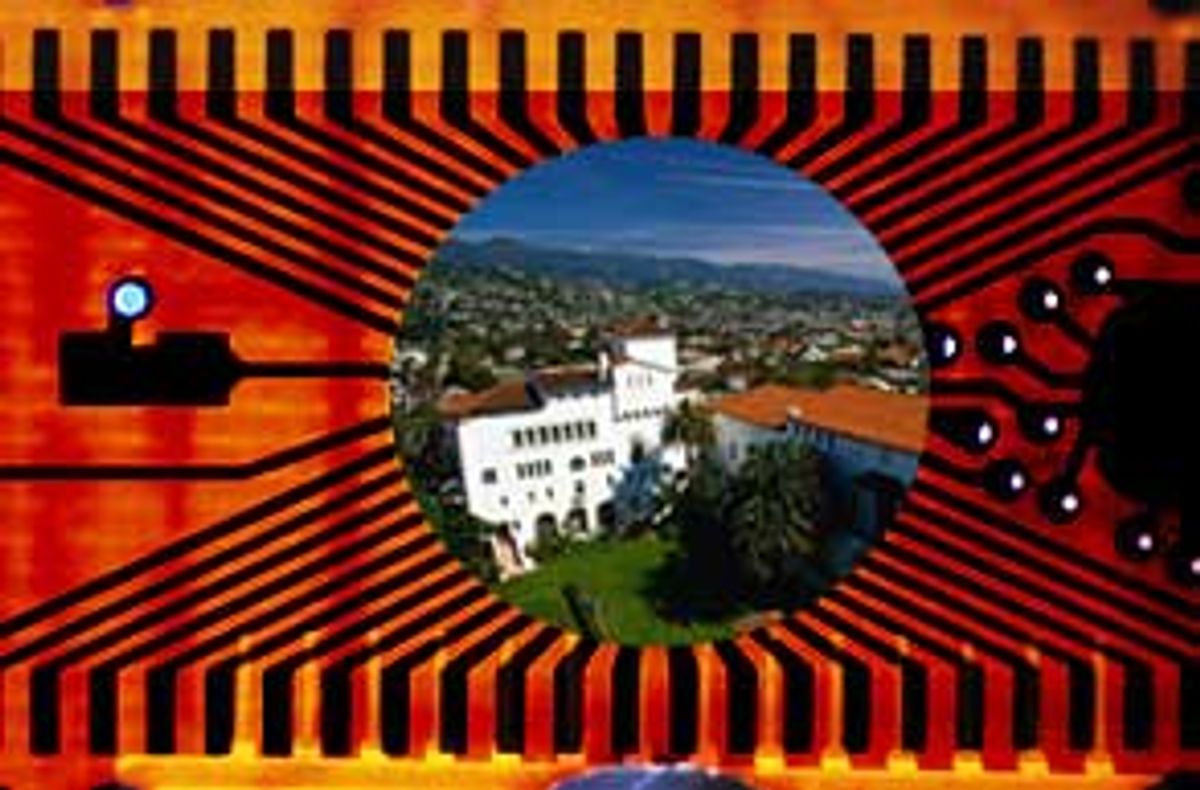 When John MacFarlane took time off from grad school to launch Software.com in 1993, Santa Barbara, Calif., didn't even have Internet access.

He managed to convince a Los Angeles company to bring the Web north, but there was a hitch: He had to sign up 10 customers. "I cold-called 100 businesses," MacFarlane says.

MacFarlane's software messaging firm has since exploded into a $5 billion company that recently announced a merger with Silicon Valley's Phone.com. And now, the greater Santa Barbara region -- aka Silicon Beach -- is home to an estimated 600 technology or dot-com companies, including Expertcity.com, Commission Junction, Somera Communications, QAD Inc. and Bertelsmann Ventures. Once known primarily as a beachside enclave of wealthy retirees and Hollywood expatriates, Santa Barbara has forged a new identity as a dot-com destination.

Communities across the country have made similar transformations, seizing on digital opportunities to pump juice into the local economy. And while the emergence of these new economy hubs has led to countless new jobs, changes have brought challenges not all residents have embraced.

Technology now represents Santa Barbara's third-largest industry, behind agriculture and tourism, while tech jobs represent about a quarter of all new jobs, says Gary Kravetz, CEO of NCC Executive Search in Santa Barbara. About half of those jobs didn't exist three years ago, he adds.

And Jeff Carmody, a partner at Santa Barbara's Agility Capital, which serves as a bank for VC-backed companies, estimates that tech employees represent at least 10 percent of the area's workforce. Over the past two years, he says, the list of companies he tracks has grown fivefold.

For years, homegrown or locally educated kids fled to other areas to make a living, since the city's main economic mainstay -- tourism -- didn't provide enough professional job opportunities. But suddenly, bright young guns from the University of California at Santa Barbara are sticking around after graduation, and techies from all over the world are settling in this region of roughly 200,000.

"From the beginning, I picked where I wanted to live, then did what I wanted to do. That's why we're here," MacFarlane says.

You would think the old guard would welcome this change. But the infusion of Web start-ups -- and the accompanying new economy culture -- has shaken up the revered status quo. "A certain portion of the population here doesn't want to ever see any change," says Bill Watkins, director of UC-Santa Barbara's Economic Forecast Project.

After all, Santa Barbara is a parochial place, where decade-long residents still get cast as newcomers. Some are apprehensive of the changes the young blood will continue to bring. Plus, Santa Barbara has deep environmentalist roots, maintaining some of the toughest no-growth urban planning policies in California.

Indeed, locals consider their home a paradise. Look in one direction, they say, and the sun sparkles off the Pacific Ocean. In the other direction, hillsides are flush with bougainvillea. And because the beach is so accessible, surfers typically catch waves before and after work -- or at lunch. And the commute? Rush hour might add five minutes to your normal 10.

That's why morphing into the next Silicon Valley makes folks shudder. "We like Santa Barbara the way it is," says Catherine Gaughen, government relations director at the local chamber of commerce. "We want tech companies that fit in, not change us into something else."

But change is inevitable when the number of high-tech jobs doubles each year, as it has in this community. "Traditionally, in UC-Santa Barbara's graduating class, 10 to 15 percent indicated they wanted to stay," Carmody says. "Now, it's 30 to 35 percent. Kids realize there's a vibrant economy here; they can put something on a r&eacutesumé that won't be laughed at."

UC-Santa Barbara computer science professor Klaus Schauser believes the university's continual output of tech-savvy grads has paved the way for the area to become a haven for the digital set. Schauser himself launched Expertcity.com, an online tech support company with two graduate students. And a good percentage of his 85-person staff hails from the university. "What's changed with the Internet is that Santa Barbara is not isolated anymore. What you get here is quality of life and access to a pool of extremely talented folks."

Schauser isn't the only entrepreneur to draw from the beachside campus. A click on the school's computer science department Web site lists some 200 local firms looking to recruit young talent.

Even the VCs up north have taken notice.

Dennis Cagan, founder of the Santa Barbara Technology Incubator, which offers start-up space and financing to local entrepreneurs, recently sent one of his employees to Silicon Valley to try to attract some investment. "No one refused to see him," Cagan says. "A year ago, they would have said, 'What, are you kidding?'"

These stories make the local business community proud. But those outside this circle are paying more attention to the growing pains.

The No. 1 trouble spot is the housing shortage. Santa Barbara has long been an expensive place to live. Only 21 percent of households can afford a median-priced home of $569,000. And that price is expected to rise as more people settle in the city.

Longtime residents blame the housing crunch on the Internet boom, criticizing mostly young entrepreneurs for displacing everyone from firemen to teachers. Plus, there's some resentment, with youthful millionaires throwing their money around. "You're starting to hear, 'Oh, that's a dot-com lot' where you see an expensive house torn down to make room for a bigger one," says a local politician.

Others worry that the tech-driven gentrification in the urban core will continue to push out poor, mostly Latino families. City Councilman Gil Garcia describes the situation as "economic apartheid," and has pushed for the city to build more low-income housing -- a plan he does not expect will receive enough support. "The NIMBY factor," he says.

Still, there's no denying a welcome vibrancy in a town once dubbed "the land of newlyweds and the nearly dead." Previously, young energy spilled out almost exclusively from Isla Vista, the student quarters surrounding the university. But these days, young people sporting shorts, flip-flops and cellphones pack sidewalks throughout the city, waiting for outdoor tables at chi-chi cafes or lunching at the Natural Cafe in Goleta, where you can get a carrot shake but not a diet Coke.

"During the recession, we were in jeopardy of losing the young energy," says Santa Barbara County Supervisor Naomi Schwartz. "What I'm seeing now is more young people committed to maintaining a quality of life, who respect the environment. They're out biking, hiking, growing young families. That really revitalizes a community."

So how do the dot-comers themselves feel about all the commotion they've caused?

Chris Baker, CEO of Maps.com, a digital cartography company, came to Santa Barbara more than a decade ago to work for a local mapmaker for $6.50 an hour. He now wonders if fast-track growth will erode the quality of life that initially brought him to the area.

"There's a little piece in the back of all our minds that thinks the place is going to be unlike why we came here," he says. "I've spent my whole life studying urban patterns and I believe that unless there's more than just lip service, there's going to be some serious problems, especially on the affordable housing side. You can't have a solid community when firemen, teachers, police, service people can't live here."