The heavenly vacation from hell

She was into sexual domination, crazy laughter and toothpaste; I was having the scariest, sexiest time of my life. 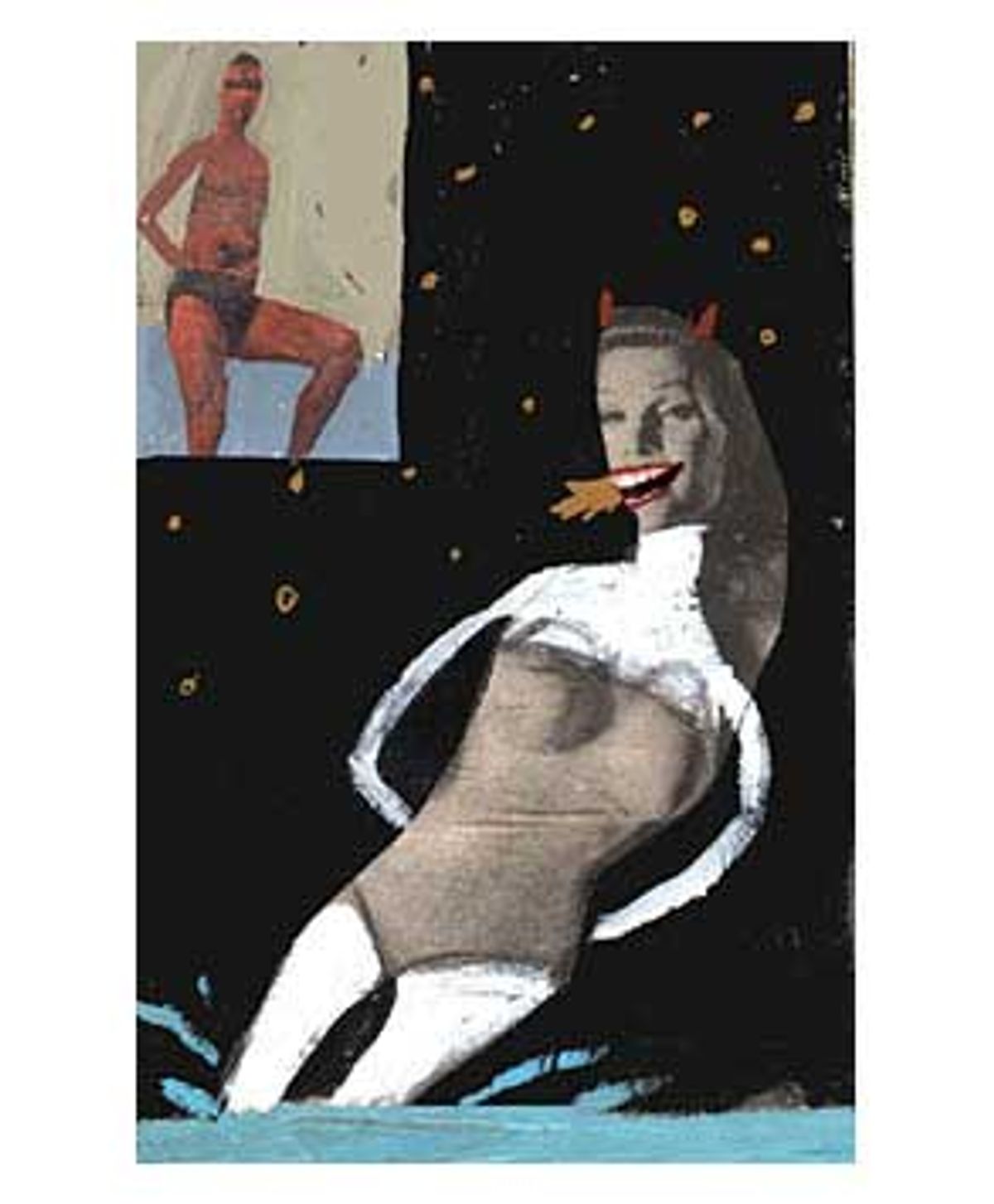 Smart, funny and far too good looking to have picked me up in a New York nightclub, Tanya looked into my eyes, took a sip from her salted margarita and quick as a ninja in a bad karate flick, she snatched my heart from my chest and tucked it in her clutch bag.

She was eroticism personified, an angel with wicked predilections. But when we flew to Jamaica two weeks later, when her conflicting personalities came at me like a three-headed beast, I realized our getaway had gone a bit too far.

For all intents and purposes, Tanya and I were still strangers when we checked into the Tree House Hotel in Negril. I knew that she was a struggling New York actress, that she rarely wandered north of Greenwich Village, that she wore a Hefty garbage bag upon her exquisite head whenever she walked alone in Manhattan (she claimed it kept away weirdos) and -- not a surprise -- that she'd been under the baffled eye of a psychotherapist.

She was beautiful, I kept telling myself. I was lonely. Who cared if she was a little strange?

We changed into swimwear and ran like giddy schoolkids down the flight of stairs, through the courtyard, past the tiki bar and onto Negril's famous Seven-Mile Beach. There are no big resorts cluttering the area, no hordes of tourists basking in Bermuda shorts. Just clusters of lodges that sit stolid and lonely, their backs forever turned to the sea.

It was January. Having just arrived from New York, where the temperature was cold enough to freeze thought, we lay on the beach like survivors from a shipwreck. We frolicked in the water like the quintessential couple in a four-color tourism industry brochure: She threw back her head, laughing affably; I held her hand and sucked in my gut, trying to look manly and prosperous.

With the eyes of a voyeur, I watched her move beneath me. She was oiled with perspiration, and her hot skin glistened in the soft moonlight filtering through a swaying sea grape tree. Eyes shut, face contorted in a rictus of delight, her hips bucked in violent spasms, faster, faster still, lifting both our naked bodies from the sweat-soaked sheets peeling back from the corners of the groaning queen-size bed.

Hands against the wall, she steadied herself, hurling her crotch against mine, swallowing me in wet pelvic slurps that sent blood rushing to my loins like fire down a trail of gasoline.

In a daunting display of female virility, she slipped from underneath and slammed me on my back with a force that bent the metal bed frame. She then looped one leg across my twitching torso and mounted like Annie Oakley on a mission. Strands of damp black hair lashed against her face, in tune to the gallop of her passion.

When she finally reached her destination, when every muscle in her body tensed from sudden impact, her head fell backward, her arms flew sideways in a vibrating T and she let loose a witch-like shriek.

Before the beastly sound subsided, an angry voice flew in from the window, pleading that she "Shut the fuck up!" Tanya just laughed. For five eerie, ball-shriveling minutes she laughed.

Blinded by beauty, mesmerized by her appetite for intense commando sex, I refused to accept the naked truth: Tanya wasn't boffing with a full deck.

The next day reality hit me like a Tyson punch. While lounging on the most perfect white sand imaginable, my not-so-normal lover turned to me and said, "I can't relax." I gazed along the seven-mile strip of powder, then to the turquoise sea and giant popcorn clouds that danced on the blue horizon. "This isn't relaxing?" I asked, somewhat sarcastically.

With that, she announced her return to the hotel room.

I trudged beside her in the tropical heat, stealing glances at the Cindy Crawford/Tyra Banks-like face that held within it all the loveliness and mystery meant to befuddle man.

When we reached the door Tanya was eerily quiet. Looking into her faraway eyes, I could see that she was in pain. At this point I didn't know it was deep, untreatable, psychological pain. I thought maybe she had gotten too much sun. Nevertheless, I apologized for being sarcastic, kissed her on the cheek, then retreated to the beach, thinking she needed some time alone.

There, while staring absently into the clouds, I saw an image of Tanya's shaved V-shaped intersection, where I'd spent two glorious weeks caught in orgasmic gridlock. Overcome by a sudden need, I bolted from the water, ran past the tiki bar, through the courtyard, up the steps and stood panting like a felon in front of our hotel room.

When I opened the door, maniacal laughter knifed through air that suddenly seemed too thin to breathe. The laughter was not unlike the creaky "Hee, hee, hee ... " of the Wicked Witch of the West. Waves of gooseflesh rolled from my belly to the tips of my limbs. The ghostly glee was severed by a disembodied voice that said, "Shut up, silly!" A third voice, paternally harsh in nature, quipped, "You're a bad, bad girl."

I prayed that Tanya was playing some new Jamaican word game, though deep down inside I knew the truth. Following the voices, I crept past the broken bed to the partially open bathroom door. She was standing in front of a full-length mirror in all her naked splendor. A river of toothpaste foam ran from her mouth, down her chin and neck, between perfect silicone-less breasts, and dripped from her crotch into a frothy white pool that spread slowly between her feet.

I watched in horror while she blurted out that spooky laughter again, while those libidinous lips spat self-incriminations of silliness, while a third voice scolded the bad girl she believed herself to be. My mouth fell open. My heart hammered against my chest. Instead of being on a dream vacation, I had plunged into psycho hell with Sybil.

I tried easing away from the door, but in a panic I pushed against it. The door swung open. Sybil spun around, fell to the floor and screamed. She lay there, quivering, covered in Tartar Control Crest.

"What the hell is wrong with you?" I pleaded in a shaky voice.

She looked up at me with brown eyes as big as Nebraska, white foam leaking from one corner of her mouth. When the spooky laughter started again, I went loose in my flip-flops.

I stumbled backward, convinced not only that Tanya was certifiably whacked, but that my safety was suddenly in jeopardy.

"Come to Tanya," she demanded, rising slowly, a specter of deluded eroticism in a cheap Jamaican hotel room. Her voice shook with the power of a baritone, and in her eyes there was a gleam that could have been lust or murder.

This was all very exciting, of course. As I lay there on my back I felt a pounding in my chest, a sudden tingling in the testicles. Despite lingering concerns about my safety, my penis swelled like a limp balloon filled with a colossal burst of helium.

Annie Oakley saddled up once more, but this time her mission was more urgent. She rode with single-minded intensity, bounding over hills, charging through valleys and galloping across the great Serengeti plain of madness and desire. She seemed driven by the thrill of sexual domination, compelled to go faster, ride harder, plunge deeper every time I cried out her name.

She was a bad, bad girl, all right. But there was nothing silly about her. This time when she tensed from sudden impact and let loose that witch-like shriek, I shrieked right along with her. Again and again and again.