Tim Stack, the creator of "Son of the Beach," gabs about show biz, money and producer Howard Stern. 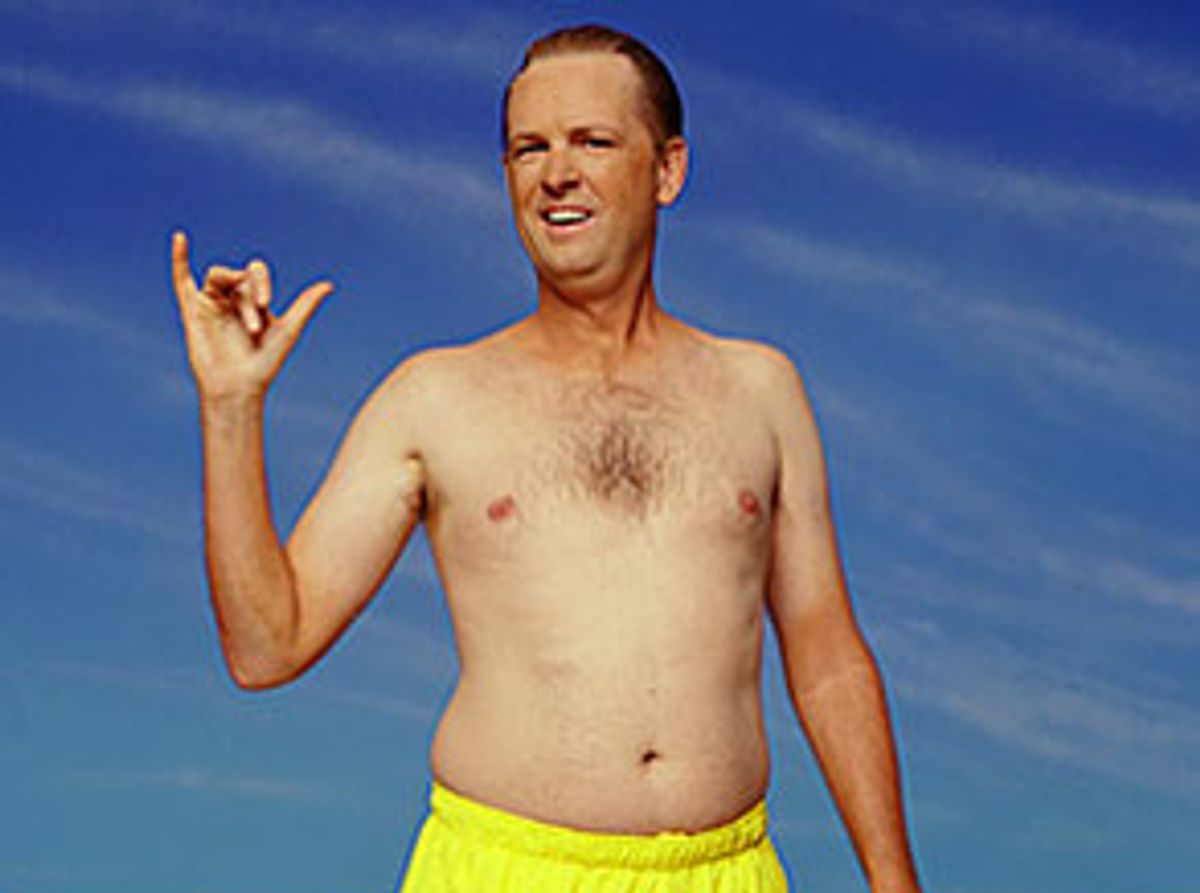 "Son of the Beach" is the funniest show on television. Any of a dozen perfect little moments can be displayed as proof:

1) Notch Johnson, Tim Stack's character on his beach-patrol "Baywatch" sendup, posts a flyer during the morning meeting and tells his staff to "keep an eye out for this little troublemaker, Osama bin Laden."

3) Chip Rommel, played by Austrian bodybuilder Roland Kickinger, is concerned that a terrorist threat will disrupt the idyll of Malibu Adjacent, including the public transportation schedule. "The trains must run on time!" he shouts.

If the names of the characters alone don't make you laugh, you don't get it.

But if you do get it, if you sense that the show's not only just plain funny but really smart and sweet relief from the uptight snarky-yuppies-in-an-apartment sets that have dominated sitcoms, then "Son of the Beach" is a perfect little gem: one of those shows you're almost glad no one knows about so you can keep it like a secret. Nevertheless, with Howard Stern backing it as executive producer, a top-notch writing team and can't-look-away cast, it's not going to stay undiscovered for long.

Green talked to star, writer and co-creator Stack about the show, the TV business and money. A week or so after the interview, Green saw Stack at a party for the show's second season. He introduced us to Stern and said, "They're going to write a nice story about the show." Stern said, "You'd better. He'll track you down. With a physique like that, you better be worried."

The premise of the show -- gorgeous young people bouncing on a beach with you intentionally sticking your pasty white stomach out as far as it will go -- is a brilliant platform for both satire and just plain fun.

When we set out to do the show, we wanted there to be nothing redeeming. If we ever did a "special episode," it would be so embarrassing. That's why we do those ridiculous public service announcements at the end of the episodes. The first show I loved was "Sea Hunt" with Lloyd Bridges, my earliest memories of television. He'd be at the back of the boat, he'd give a "Hey, kids, when you're swimming ..." water safety tip. I can't drop a lot of names because my life is so shallow, but the one guy I know is Jeff Bridges, and he hit the floor when he saw the PSA portion of our show.

Apparently, David Hasselhoff loves it. He did some promos for us. We were trying to get him for the show, but the scheduling wasn't good. He's a big Stern fan. Ironically, when we first got going we got all these legal letters from the company that distributes "Baywatch." And we were like, jeez, it's satire. And then when they realized Hasselhoff was digging it, they stopped sending us letters.

It'd be easy to assume that your costars are only there for their considerable bodies, but I think all of them are surprisingly strong comic actors.

I really think BJ [Jamie Bergman] could be a star. Look at where Marilyn Monroe or Goldie Hawn came from: telling jokes in bathing suits. And Jamie will do anything. It's like, "Great, let's go."

Are you rich from this show?

No one's making any money on this. We're all doing it because FX leaves us alone and lets us do what we want to do. So it's a trade-off: You give up the money you'd make on a network for the freedom to do what you want to do. The production company that does our show is great, but we do this show for a third of what a network would spend. "Action," which is running right after ours and was canceled after like six episodes, cost three times what we'd spend. I'd be making three times what I'm making if a network made "Son of the Beach."

I ask every television person I interview how rich they are and they all cry poverty.

Yeah, I know. My wife is like, "Can I get that?" And I'm like, no, and she's like, but you're on a TV show. And I'm like, it's on FX. We follow the "South Park" guys. They knew that creatively, if they stuck to their guns and developed their ideas in the creative cocoon of Comedy Central, it'd pay off for them. And it has.

How involved are you as a writer

I think of myself more as a writer-producer than an actor now. I guess because I've been doing it so long, my focus is on the writing even more than the acting. And my writing partners, Jim Stein and Dave Morganson, are in real good synch.

How about Howard Stern? Is he actively involved or just loaning his name and support?

What's great about Howard is he doesn't -- it's not like, can you get that lesbian to shave herself, but it's way more like the network gives notes. Stuff like, "Let's meet the villain before we see Notch."

That sounds neat, but give me a juicier example. I want proof that he's an example of a phrase I just learned, "parking-space producer."

I have a great example for you, one of the smartest observations I've ever had from a producer. We'd come from writing "Night Stand" (Stack's show on E! Entertainment Television), which was "Guest star, then Dick [the host] gets a joke," over and over.

Howard saw the "Son of the Beach" scripts. In sitcoms, there's always an A and a B story and Howard said, "You gotta take Notch OUT of the B story."

We were apprehensive, we hadn't even cast the show yet, and we were nervous whether the bombshells we knew we were going to hire could carry the acting without me in the scene. He said that if we can't find people who can carry their weight we should just shut it down.

He turned out to be absolutely right. He's read another script of mine -- he made it a better script. He should give a tutorial to executives on how to give notes.

Howard hangs out at the set. He was in town a few weeks ago for vacation. We did the table reading; his daughters read a couple of the parts and he was here for the whole week on the set.

Whenever a show gets a laugh out of body-part humor, it's tempting to imagine deeper layers at work, so you feel less guilty. But your show really does have underpinnings beyond the puns.

Well, take stuff like Leila Arcieri's character, Jamaica St. Croix. She is both playing and satirizing the hip-hop lingo. (Jamaica became a lifeguard as a tribute to her brother, who was killed in a swim-by shooting.) And then there's the writers, showing our age, like a reference to "Would You Like to Swing on a Star" by Bing Crosby.

How has your plan to utilize the "South Park" creative petri dish model worked out so far?

What's been happening is we're getting all these offers to write features. Executives see a funny show -- even like "Road Trip," which made a lot of money and wasn't a great movie -- and they realize our ability to write for a younger audience and do those "Animal House" jokes. As far as mainstream television, I'd love to get into it, but they pass on us all the time. They can't see what's not there. That was the great thing about Brandon Tartikoff: He'd try to find something completely different from what was working on other networks. Everything was "Friends," then everything was "Who Wants to Be a Millionaire." I'm pontificating. The same way "Seinfeld" got all these New Yorkers-in-an-apartment romance sitcoms going. Tartikoff would see Mr. T and go, "He could be a TV star." He saw MTV and said, "Let's do music video with cops" and there you had "Miami Vice."

I made my home at the Groundlings. Pee Wee Herman, Phil Hartman and Jon Lovitz, really terrific people. Lisa Kudrow. A breeding ground for "Saturday Night Live." Phil and I were great friends up until the end. Lovitz I talk to all the time. We lived in the same apartment building way back when. When he got his first role, he literally threw up over the balcony.

So how's the show doing?

Well, it's the most work I've ever done. It's really hard. And our numbers would be way higher if we were on in Manhattan. [Sadly, FX is not offered on the Time Warner cable system in New York.] That's where buzz starts.

I think the show has at least some buzz because you seem to be landing ever more impressive guest stars.

Mark Hamill will be guest star in an upcoming episode. He plays an evil cult leader called Divine Rod, and BJ gets involved with him. Vincent Pastore (Big Pussy from "The Sopranos") is on another show playing "Vinnie Fallacio."

There should be an Emmy for character names. Do you invest?

I have a retirement account. My brother worked for Yahoo, so I bought a bunch of that early on. I live a great life -- Santa Barbara [Calif.], wife and two kids. But you think you have a television show and you're rich.

"Son of the Beach" is running its second season of brand-new episodes every Tuesday at 10 p.m. EDT on FX. This week, check out Notch Johnson protecting a stalked celeb in "A Star Is Boned."

Ken Kurson is editor of GreenMagazine.com. Author of "The Green Magazine Guide to Personal Finance: A No B.S. Book for Your Twenties and Thirties," Kurson has also written for Worth, Esquire, the New York Times and other publications.