The boxer currently known as Prince 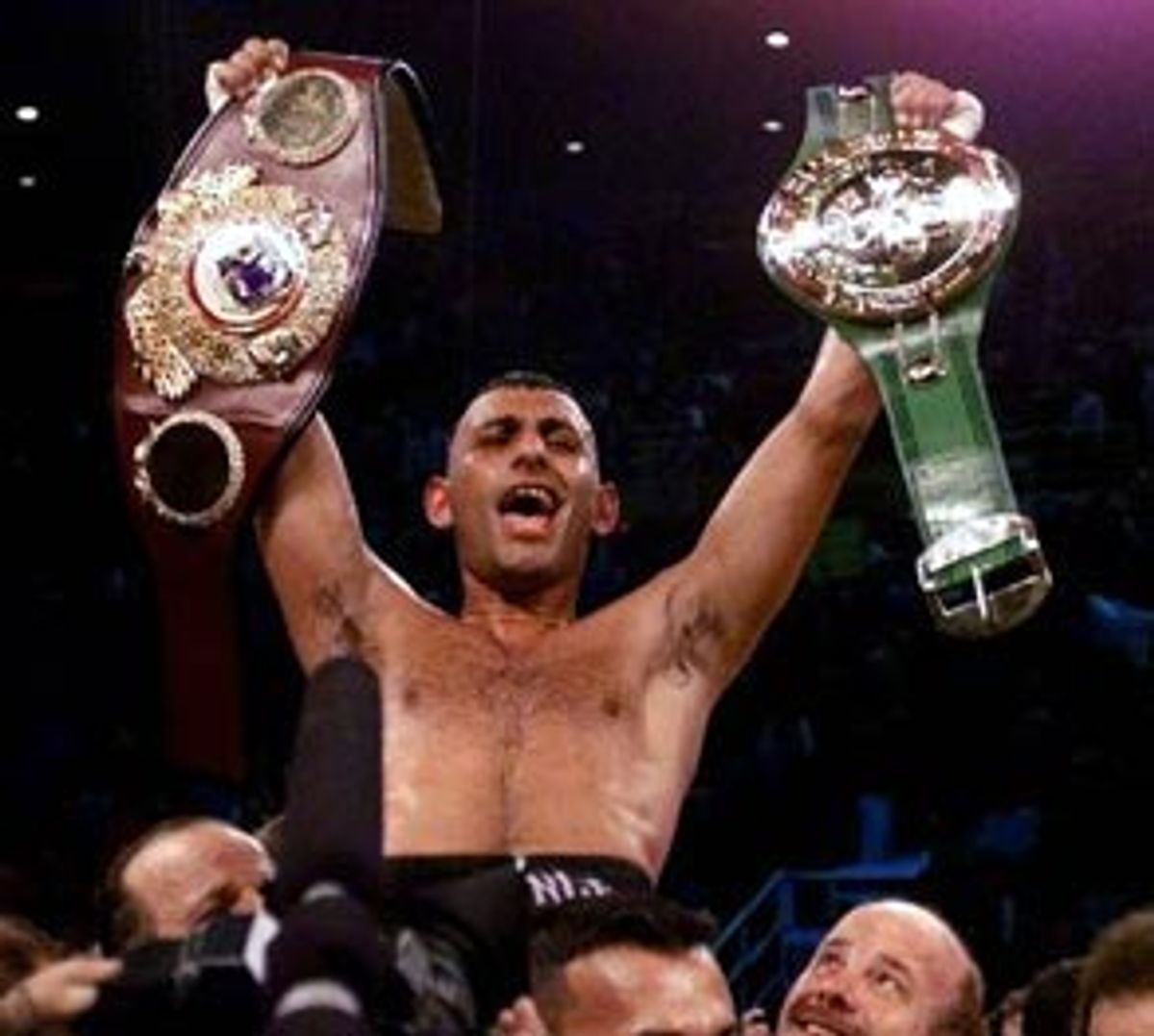 Prince Naseem Hamed -- Naseem is Arabic for "gentle breeze" -- is, well, unique. He's probably the greatest boxer of Yemenite background in boxing today. And that's just for starters. He hails from Sheffield, England, which makes him British if not actually English, and outside of current heavyweight champ Lennox Lewis, how many Brit champs have we seen in the last few decades? He's a southpaw - most of the time, depending on the situation - and there aren't many of those in boxing. He's a devout disciple of Allah - or "Ah-lah" as he pronounced it in Larry Merchant's face after he cleaned an opponent's clock on a recent HBO telecast. And if you discount Mike Tyson's sudden conversion in prison a couple of years ago, there sure arent many of those in the fight game either.

The Prince is also a real smartass. Almost to a man, American sportswriters and TV commentators can't stand him. They can't stand the way he drops his hands in the ring, like the young Cassius Clay, or the way he saunters up to a microphone and announces, "There is only one God and his name is Allah, and as long as he is with me I am invincible." They dislike his leopard print trunks and the back flips he does in the ring. They loathe the disco dances he does during his ring entrances, which he plans with the same meticulous attention to detail and spectacle that he does his fights. (My favorite was the one he used on Halloween which featured headstones inscribed with the names of his opponents.)

Most of all they can't stomach the sarcasm and contempt in which he holds them. It's supposed to be the other way around: The U.S. sports press is supposed to reserve the right to hold foreign fighters in contempt until they have proven themselves in their eyes. The Prince, he doesn't give a damn what the U.S. sports press thinks of him. He smarts off to people like Larry Merchant, with whom he has developed a TV relationship not unlike Howard Cosell's with Muhammad Ali (I say "TV relationship" because Merchant can't hide the fact that he'd love to see the Prince knocked on his disco-twitching butt). My favorite exchange came on the Halloween night fight in which Merchant, signing off, sneered "Yeah, well, Happy Halloween," to which, not missing a beat, flipped back, "Yeah, trick or treat, La-wee." (He says it like that -- "La-wee" -- over and over, which must drive Merchant nuts.)

Actually, the Prince, who's the undisputed WBO and WBC featherweight (120 pound) champ, has been knocked on his royal butt several times. In his last fight, Augie Sanchez did it. The problem is, the Prince doesn't stay there long. Getting knocked down in his case is not the result of a glass chin but of his peculiar habit of leaning back and away from punches. Since the Prince is only 5-foot-3, this causes taller fighters to punch down and away, costing them almost all their leverage and, hence, their punching power. Conversely, it doubles the Prince's power, which is already extraordinary for his weight, because nearly everyone he hits is moving into his punches.

"He hits like a middleweight," says Kevin Kelley, the Prince's first ranked American victim, "and you can't hit him back, not solidly. I knocked him down twice, and he laughed both times. I don't think I hit him squarely one time. When you hit him as he moves back, it's like punching a giant sponge." A sponge that can hit you back with the force of a man perhaps 30 pounds heavier.

Prince Naseem has so far tapped into the rapidly growing fan base of Middle Easterners who have settled in both the U.K .and U.S., but he's attracting a celebrity following, too. Wesley Snipes, Michael Jackson and Puff Daddy are already acknowledged groupies. All he needs are the big opponents, name fighters like Eric Morales, who have ducked him not because they fear losing but because they fear looking bad. But with HBO backing him, the big fights are sure to come.

Memo to Larry Merchant: Get used to the Prince, he's here to stay.

I've gotten some nasty mail before - my mom really was angry about that Tiger Woods column - but nothing like the response to last week's Roger Clemens column. Most of it was along the order of "How can you call a guy with a 3-3 post-season record the greatest pitcher of all time?" and "How could you even mention Clemens in the same story as Sandy Koufax?" (I didn't, actually, I said Lefty Grove, but let that pass.)

The first comment caused me to reflect on how post-season-conscious sports fans have become; I'm convinced that the majority of people who call themselves baseball and basketball fans these days don't start paying close attention till the playoffs start. Roger Clemens has won 258 regular season games, and all some people can focus on is "He was only 3-3 in the post-season"? One may as well dismiss Willie Mays because he was just .230 in four World Series without a home run, or Sandy Koufax because he was just 4-4 in post-season play.

Speaking of Koufax, there are some interesting points of comparison. Koufax had a career won-lost percentage of .655 to Clemens' .648 - but Koufax pitched for four World Series teams and Clemens for only two (thus far). Koufax led his league in earned run average five times in 12 seasons with a career mark of 2.76. Clemens, so far in 17 seasons, has an ERA of 3.04 and has led his league six times. I think Clemens' is the greater achievement.

Koufax not only pitched for better teams, he pitched half his games in the best pitcher's park in the National League. Clemens spent 13 years pitching in the best hitter's park in the American League. Id say Roger Clemens deserves to be mentioned in the same story as Sandy Koufax.

By the way, neither man ever won a game on a Jewish holiday. Go figure ...