This month a panel of medical experts responded to a Web pornographer who tried to auction supermodel eggs. 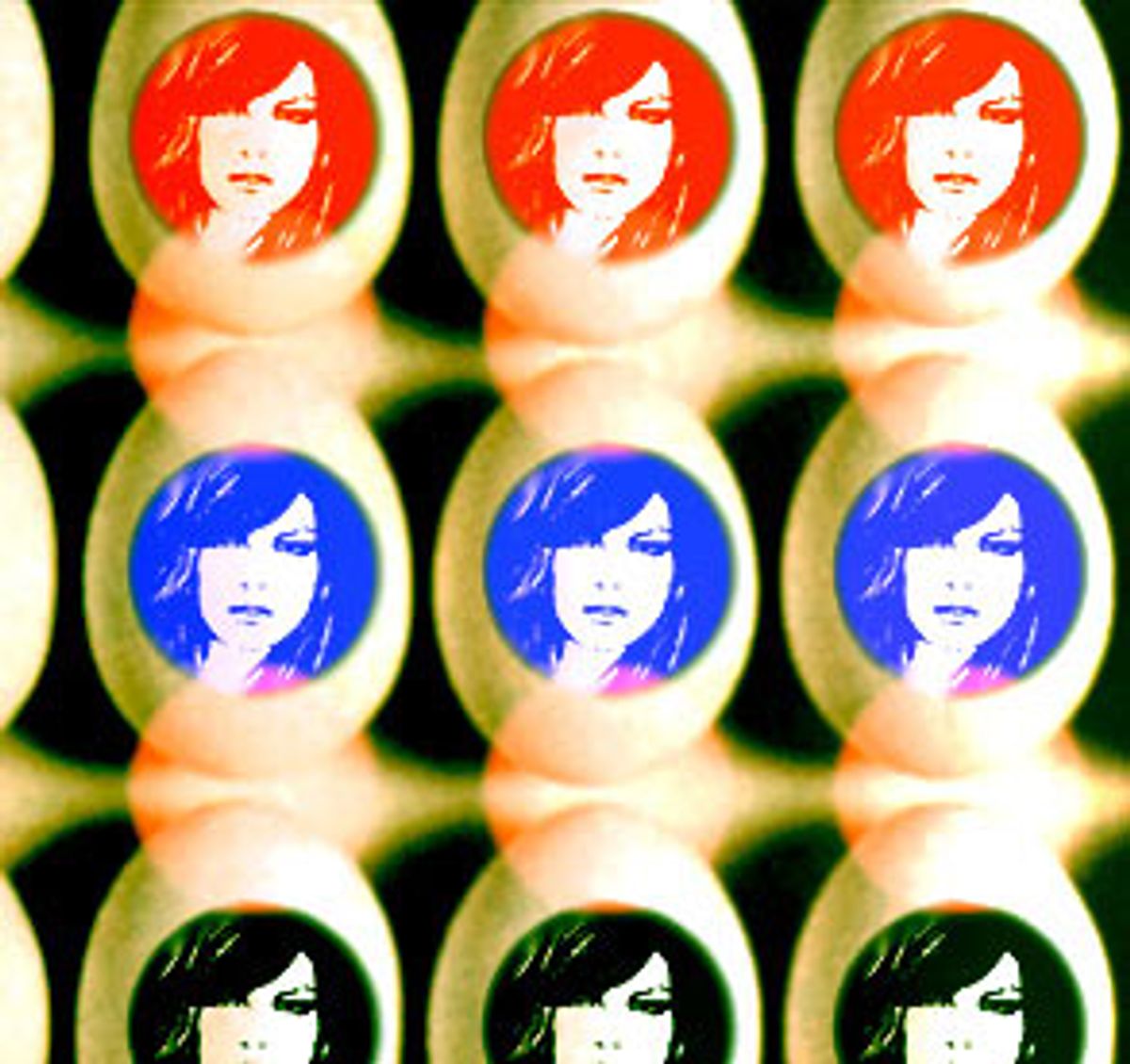 This month the American Society for Reproductive Medicine (ASRM), the nation's largest organization of fertility professionals, released a report on the increasing commodification of human egg donation. In a word, the report decreed, it has to stop. Paying donors $5,000 or more requires special justification, and paying sums above $10,000 is simply inappropriate.

Egg donation has been a burgeoning field since the '80s when the first egg donors received a scant few hundred dollars for their troubles and tissue. In recent years an increasing number of infertile couples have looked to technology to fulfill their dreams of a biological family and buyers have flocked from Canada and Europe, where the transaction is illegal. Hence, the price of eggs in America has steadily risen. Controversy finally erupted last fall when classified ads started appearing in campus papers across the country offering $50,000 for eggs from women of a particular height, athletic ability and SAT score. Then came the brouhaha over a dubious Web auction site called www.ronsangels.com that purported to sell the eggs of beautiful women to the highest bidder.

Ironically, it was this Web site that motivated the ASRM to create the report. Although Sean Tipton, ASRM's director of public affairs, agrees the site was probably a hoax, it sent a red flag to the bioethicists and doctors who are watching the field evolve. Real or not, the site got bids of up to $42,000, proving that people are willing to pay big bucks to get the children they want.

"This report was sparked quite clearly by media reports of people seeking egg donors with specific characteristics and offering a large amount of money for them," says Tipton. "Specifically, there was the Ron's Angels Web site where he was saying that he had models who would serve as egg donors."

In fact, the ASRM's many objections read like a "don't do" list of all the things that ronsangels.com did. The report warns that high fees induce potential donors to donate for financial reasons. It's OK to compensate donors for time and inconvenience, it says, but women who give the gift of life should do so for altruistic reasons. Many donors are college students, and it's not right for them to harvest their body parts just to pay off their credit card bills, says the ASRM. Ron's Angels models openly admit they're doing it for the money. Nicole Newman, a 26-year-old actress, told the press she's doing it to make money for college. Another said she wanted the money so she didn't have to depend on men.

The report also quibbled that paying for the eggs, rather than just paying for the woman's time and discomfort, turns eggs into a commodity instead of a donation. Sperm donors are paid $60 to $75, and the whole process is done in an hour. Assuming that as an hourly wage, a payment of up to $4,200 for egg donors could be justified. Paying more than that is wrong, says the ASRM, because it commodifies the human body -- and that's disrespectful of human life. At ronsangels.com, it's not just the women's eggs that are the commodity, but also the women themselves. To view information about the "models" or bid on their eggs, you have to first become a member of the site, to the tune of $24.95 a month, billed discreetly to your credit card under the name "CCBill.com."

High payments for eggs, the ASRM also contends, encourage women to discount the rare but very real medical risks. The process, which involves the injection of hormones to induce "superovulation," causes the woman to produce up to about a dozen eggs instead of just one. Sometimes superovulation impairs the donor's future fertility; it can even cause a stroke. The risks are small, says the ASRM, but they must be assessed dispassionately -- which is tough to do with $50,000 at stake. So women need comprehensive information from qualified experts -- not people like Harris. Under the heading, "What are my credentials?" Harris boasts, "I am a renowned fashion photographer and director for 40 years." And in case you doubted his past experience, he adds, "I have been an Arabian horse breeder."

Finally, the report emphasizes that it's wrong to pay extra for specific traits. Paying a premium for women with particular traits promotes genetic traits that are deemed socially desirable. The ASRM's report calls this "a form of positive eugenics." Harris calls it "[n]atural selection at its very best," suggesting that buying eggs from beautiful women can give you an evolutionary advantage. Beautiful women and beautiful children, he says (along with fine art, real estate, gold, money and power), "help to guarantee the success of your genes, to get your genes to the next generation and beyond." Newman agrees. "I think a beautiful child definitely has a better chance in life," she told CBS News. "I think good-looking people just generally, just rock!"

So was the ASRM report simply an act of bureaucratic apoplexy in the face of a thinly disguised Web hoax? Perhaps, but the report also addresses an issue that has slipped through the legislative cracks. Egg donation is an uncomfortable and potentially risky procedure, and yet it's free from the rules governing human organ donation. The ethics of egg donation was an issue that had to be brought up and addressed eventually. While trafficking in designer eggs may be, as Tipton put it, "offensive and unethical," unlike the purchase and sale of organs like kidneys, it's not illegal.

Our society has long forbidden people to sell their body parts for profit, and the 1994 National Organ Transplant Act explicitly prohibits the sale of human organs. The logic goes something like this: If we let people sell their kidneys on eBay, we turn the human body into a commodity and create a market for body parts. Selling organs would make transplants too expensive for most people, and organs would end up going to the highest bidders, rather than to the most needy. Also, the poor might try to sell their organs to make ends meet -- like the woman who recently tried to sell a kidney to pay the bill for her gall bladder surgery. To put it bluntly, we'd literally be slicing up poor people to get spare parts for the rich. Not to mention the black market that would result. Basically, that old urban legend -- the one about the man who goes to a bar, accepts a drink from a strange woman and then wakes up in a bathtub full of ice to find his kidneys missing -- would come true.

But the organ law does not apply to eggs, which are considered "reproductive tissue." Why are eggs different? Unlike kidneys, of which you only have two, and you need one to live, eggs -- like sperm, blood or bone marrow -- are resources you can afford to spare. After all, you're giving away eggs you wouldn't be using anyway.

Today, matching egg donors with recipients is a booming industry. Dr. David Adamson, past president of the Society for Assisted Reproductive Technology (SART), estimates that in his clinic, a donor egg cycle costs the recipient around $20,000 with about $9,000 going to brokers. He estimates that approximately 6,000 women attempt donor egg in vitro fertilization every year. Do the math and you get an annual industry of $120 million. Of the $20,000, however, only $2,500 goes to the donor.

But now demand for egg donors has outstripped supply, creating a marketplace for human eggs. When the initial fees stopped attracting enough donors, market forces prevailed and the rates went up. Soon, fertility clinics were at war, competing for donors by increasing their fees. In New York, clinics advertised they would pay $5,000 for a clutch of donated eggs. At that price, donors were making more than the physicians.

As commercialized as egg donation has become, it's obvious that ronsangels.com and the $50,000 classifieds are far from the norm. What's the actual state of the business today? "You've got two parallel systems," says professor Rebecca Dresser, the primary drafter of the ASRM's report. "You've got the programs that are run by the clinics, and then you've got the entrepreneurs."

Of the roughly 350 fertility clinics in the United States, 90 percent perform the egg donation procedure. Of those, 90 percent belong to SART, an affiliate of the ASRM that adheres to its guidelines. "By definition, SART members are legitimate because they have standards they have to meet," says Tipton.

Then there are the rogue clinics. "They don't like the standards that SART sets and choose not to belong," says Tipton. "They object to things like putting a cap on compensation for egg donors." The largest of these rogue clinics is the Genetics and IVF Institute in Fairfax, Va. Their site lets prospective recipients browse a database of egg donors according to race, eye color, skin type, hair color, education, frame, height and weight. For hair color alone, there are 20 choices, from auburn/curly to red/straight.

The other channel for recruiting egg donors is the brokers. Brokers vary widely in legitimacy. On one hand, there are respectable matching agencies that work closely with SART-member fertility clinics that don't have in-house donor recruitment. These agencies have medical staff and conduct initial donor screening themselves. Then there are the "entrepreneurs," who are rarely doctors. Many of them started off as patients; others are lawyers. Since brokers arrange transactions between individuals, they do not have to adhere to the ASRM's guidelines -- and there is no limit to the amount that can be paid. The $50,000 ads in the college newspapers turned out to be the work of Thomas Pinkerton, a San Diego real estate lawyer turned broker, who was advertising on behalf of an anonymous recipient. Another brokerage, the Los Angeles Center for Egg Options, has put a cap of $6,500 on donor compensation, but does not restrict the giving of "gifts" to donors. Past gifts have included cruises and a year of paid college tuition.

Harris has yet to respond to the report, but for what it's worth, he's still insisting the site is legit. Harris' PR man told me that a sperm donor had provided sperm for a single woman in Georgia, and a model had provided eggs to a couple in Massachusetts. "Rest assured," he wrote, "transactions have been made." And the New York Times' Goldberg stands by her original article. "I'd still bet anything that it is the real thing, and remain a bit baffled about why some people concluded it was a hoax simply because Ron Harris was also involved in soft-core porn," says Goldberg. "You wouldn't exactly expect a Boy Scout to be involved in a project like Ron's Angels."

Will the ASRM's report help curtail the designer egg industry? Will it dampen the desire to create children made in supermodel images?

It's unlikely. Ironically, the whole idea of getting a made-to-order child -- picking and choosing traits like they were options on a new car, placing ads in Ivy League newspapers, bidding on Ron's Angels -- is far from foolproof. It all involves a roll of the genetic dice. The human genome is far too complex for a "what you see is what you get" principle. You can buy eggs from a tall woman with blond hair, blue eyes, high SAT scores, musical talent and a Yale diploma -- but there's no guarantee her baby will arrive with the same pedigree.

Jay Dixit is a freelance writer living in New York.