Memories of the controversial 1988 ad are stirred as George W. Bush appears at a university with ties to the ad's creator. 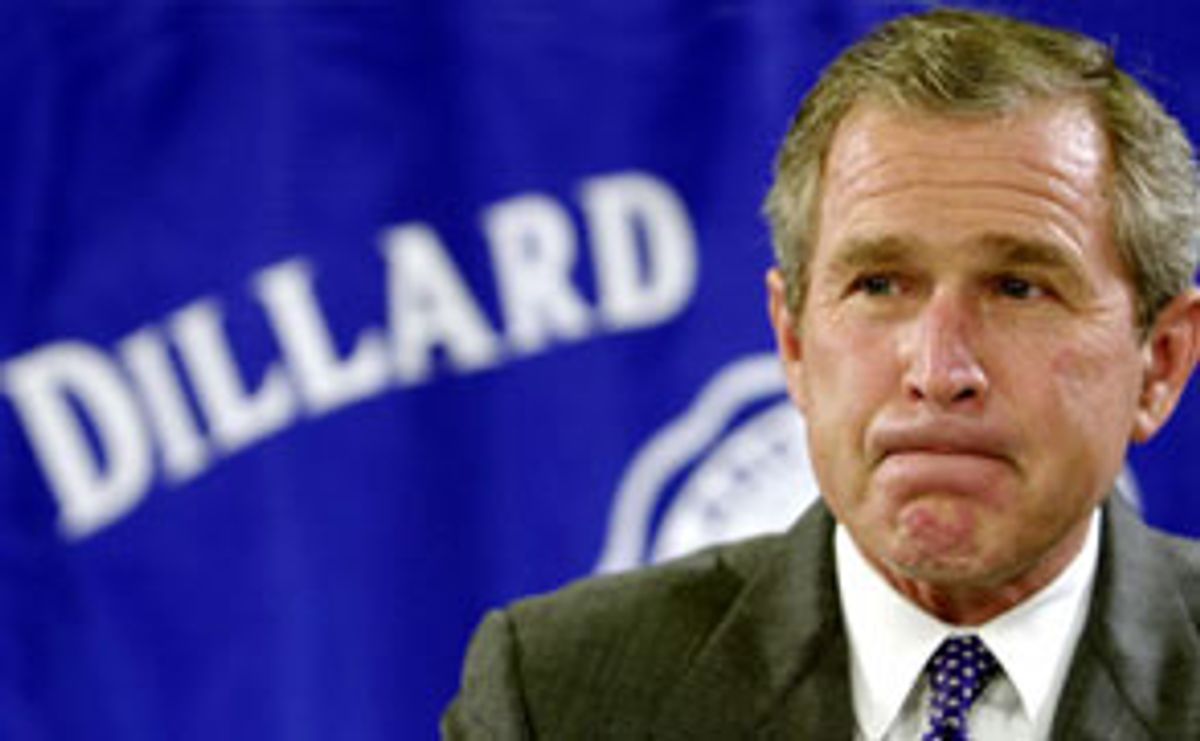 As Gov. George W. Bush strode onto the campus and into an auditorium at Dillard University in New Orleans on Thursday, there was one gentleman in the audience who didn't fit in with the Bush campaign's attempts to project an image of inclusiveness: David Carmen.

Who is David Carmen, you ask? According to lobbying registration papers filed in July 1999, he's the CEO of Carmen Group Inc., the official lobbying organization for historically black Dillard University. Ironically, the Carmen Group is also the same public relations shop responsible for the infamous 1988 Willie Horton TV ad produced for the National Security Political Action Committee and its Americans for Bush arm -- both independent advocacy groups. The crossing of paths had some Democrats in D.C. worked into a froth -- Bush and the Willie Horton folks at the same event? A-ha!

But according to Bush spokesman Ray Sullivan, the Texas governor visited Dillard not because of Carmen, but as an acknowledgement of Bush media guru Mark MacKinnon's longstanding friendship with Dillard president Michael Lomax, on whose 1993 Atlanta mayoral run MacKinnon worked.

"Mark MacKinnon and Dr. Lomax have been talking for more than a year about getting the governor to Dillard," Sullivan says.

Dillard University's vice president for institutional advancement and development, Love Collins III, who worked with the Bush campaign on the event, confirms that Lomax assigned him the task, and that Carmen was only there because his firm "has done right by us in the last couple years."

Likewise, it bears mentioning that neither Carmen nor the National Security PAC -- nor, even, Americans for Bush -- had any direct ties to the 1988 presidential campaign of then-Vice President George H.W. Bush.

But the Willie Horton controversy looms large in American politics, as evidenced by the fact that you won't find the creators of the ad affiliated in any way with the campaign of its beneficiary's son, George W. Bush.

Depending on your point of view, Bush is either too savvy, too principled or too inclusive for that. But if Bush has consciously distanced himself from the Horton team, it's also probably wise.

In many ways, the legend of the Horton ad far exceeds its reality -- a reality that may be even more pernicious in some ways. Because, though the elder Bush and Lee Atwater received blame (or credit) for the Horton ad, according to the official books, they had absolutely nothing to do with it.

To recap: "Weekend Passes" was produced by Carmen, and was broadcast in the fall of 1988. It featured the story of Horton, a convicted murderer granted a weekend prison furlough under then-Massachusetts Gov. Michael Dukakis during which Horton escaped to Maryland and assaulted a man, Clifford Barnes, and repeatedly raped Barnes' wife, Angie. While then-Sen. Al Gore, who was a conservative Democrat and presidential candidate at the time, slammed Dukakis for his role in the Horton fiasco during the primaries, neither he, nor the original ad, mentioned Horton's race.

But almost immediately after it began running, as a Brown University study of the ad revealed, GOP consultant Larry McCarthy, who worked for National Security PAC, stealthily inserted a looming mug shot of Horton in a substitute version of the ad, revealing the convict to be -- ta da! -- an African-American. McCarthy said the photo of Horton used in the ad was "every suburban mother's greatest fear."

"Weekend Passes" meshed well with an official Bush campaign ad, "Revolving Doors" -- another spot critical of prison furlough programs. Produced by Bush media consultant Roger Ailes -- a former boss of McCarthy's -- with a helping hand from Atwater, the ad also portrayed Dukakis as soft on crime. But the official campaign ad never mentioned Horton's name; and, of the 19 "prisoners" making their way through the "revolving door" of the Massachusetts penal system, 16 were white, two black and one Latino.

Meanwhile, another independent, pro-Bush group, Committee for the Presidency, funded a $2 million speaking tour headlined by Clifford Barnes and Donna Fournier Cuomo, the sister of Horton's original murder victim, around the country. The Committee for the Presidency, formed by a Los Angeles GOP consultant with -- again -- no direct or provable ties to the Bush campaign, also broadcast two ads, one with Barnes claiming that "Mike Dukakis and Willie Horton changed our lives forever," the other with Cuomo saying that "Dukakis let killers out of prison ... Willie Horton stabbed my teenage brother 19 times." Though there was no evidence of any collusion between any of these independent groups and the Bush campaign, Atwater had told GOP officials, "By the time this election is over, Willie Horton will be a household name."

They succeeded in that goal, though the Horton ad soon became notorious for, in the words of Annenberg School of Communications Dean Kathleen Hall Jamieson, creating "a black face for crime."

It succeeded, largely by incessant repetition by the television news. And though Federal Election Commission complaints alleging collusion between the Bush campaign and the team responsible for the Horton ad went nowhere, then-President Bush himself defended the spot in July 1991, after then-Sen. Bill Bradley accused the president of using "the Willie Horton ad to divide white and black voters and appeal to fear."

"The point on Willie Horton was not Willie Horton himself," Bush said. "The point was, do you believe in a furlough program that releases people from jail so they can go out and rape, pillage and plunder again? That's what the issue was."

But George W. Bush's message is quite different from the one his father sent 12 years ago. And these are different times -- according to polls white fears about black criminals are far less piqued than they were when the elder Bush tapped into that emotion to help him win the presidency.

Democratic officials in Washington were eager to discuss Carmen's presence at Bush's Dillard appearance. But, ironically, this first attempt to tie Bush to the Willie Horton team comes as the result of the Texas governor's visit to Dillard University -- one of the nation's Historically Black Colleges and Universities, or HBCUs -- where he proposed a five-year, $437 million program to fund other HBCUs, the pre-1964 institutions of higher learning that educate many African-American students.

Of course, Bush's commitment to Texas' HBCUs, including Prairie View A&M University and Texas Southern University, has been called into question. In May 1999, Bush and the Texas Higher Education Coordinating Board were sued by civil rights attorney Alvin Chambliss, who criticized the lack of attention given to Texas' HBCUs as the portion of the state's sizable tobacco settlement cash intended for medical schools was doled out. The HBCU issue was also raised at a March protest that drew the Rev. Jesse Jackson. Additionally, according to the Austin American-Statesman, several students booed Bush and refused to shake his hand when he spoke at Prairie View's commencement ceremony in May.

But Bush is a savvy politician. Hence, in April, Texas finally reached an agreement with the federal government on how to comply with Title IV of the 1964 Civil Rights Act, which addresses disparities in funding between mainstream universities and HBCUs. Texas was one of only three states that had been holding out.

The move surprised some. "I'm shocked that Texas would enter into an agreement, because they have been so hands-off on compliance issues for so long," M. Christopher Brown, professor of higher education at the University of Illinois at Urbana-Champaign, told Black Issues in Higher Education. "But it is an election year."

But just because you have to look hard doesn't mean the Willie Horton alumni aren't doing everything they can for their boy.

The inimitable Floyd Brown, former political director of Americans for Bush, for instance, co-wrote a scathing paperback indictment of Bush's opponent, "Prince Albert: The Life and Lies of Al Gore." Brown is also known for his assaults against then-Gov. Clinton, including the 1992 book "Slick Willie: Why Americans Can't Trust Bill Clinton," as well as a 1-900 number featuring the melodic cooing of excerpts of phone conversations between Clinton and Gennifer Flowers.

Brown funds a Washington state conservative group, Citizens United, which is run by David Bossie, "Prince Albert" co-author and former investigator for Republican Rep. Dan Burton. Brown also served as a delegate at the GOP Convention a few weeks ago. He has a Web presence, hosted a radio talk show that was Clinton-accuser David Hale's first stop on his Whitewater tour and is generally out there stirring up the pot.

More noticeably, McCarthy and Craig Shirley, who handled P.R. for the Horton ad, have teamed up again under the auspices of the Coalition to Protect Americans Now, or CPAN, which began running TV ads addressing the Clinton administration's position on developing a missile defense system, saying "Clinton and Gore would give the Kremlin a veto over American missile defenses." McCarthy's firm, McCarthy Marcus Hennings Ltd., produced the ads, while Shirley flacked them.

Two days after the CPAN ads began running in May, Bush delivered a speech on a missile defense system at the National Press Club. As it did when Sen. John McCain, R-Ariz., suffered the attacks of pro-Bush third-party groups during the South Carolina primary in February, the Bush campaign has denied any collusion between camps, and there is zero -- zero -- hard evidence to the contrary.

As long as there are Democrats and reporters sniffing around, eager to tie the Willie Horton Class of '88 to whomever they can, the likes of Carmen, McCarthy, Shirley and Brown will be kept as far away as possible from sophisticated pols like Bush. They are, in large part, radioactive.

In 1996, White House aides Mike McCurry and George Stephanopoulos tried to slam both the campaign of Sen. Bob Dole and former G-man Gary Aldrich's scathing, if factually challenged, book about the Clinton White House, "Unlimited Access," by tying both to the book's flack, Shirley. The Aldrich connection was accurate; the Dole one was not.

But, as most members of the team are, for the most part, still players in the world of politics, some run-in will always be inevitable -- and not just through the third-party ads that advocate for Bush that the candidate, as his father before him, never knows anything about.

Citizens for State Power signed on with both the Carmen Group and Shirley, who has also flacked for the National Rifle Association, Paula Jones and the Kuwaiti government.

McCarthy was just hired by the Association of American Medical Colleges to work on a $30 million ad campaign, and he is the media consultant for the reelection campaign of Montana Sen. Conrad Burns as well as Yardsales.com.

And then there's Jesse Raiford, who offered the best evidence of collusion between the National Security PAC and the elder Bush's 1988 presidential campaign, since Raiford did post-production on the Willie Horton ad on behalf of National Security PAC, while simultaneously working for Ailes Communications, the official media shop of the Bush campaign.

Raiford's been laying rather low, though just last month he flashed into the media sights once more. In a touching bit of altruism, Raiford donated 33 hours of videotape to the University of Georgia media archives. The tapes, recorded in 1983 and estimated to be worth around $900,000, feature historian Frank Gannon chatting amicably with former President Richard Nixon, who waxes philosophic in the tapes about the similarities between poker and politics.