Presidential candidate John Hagelin and I come from different sides of the tracks in Fairfield, Iowa. And finally, I'm OK with that. 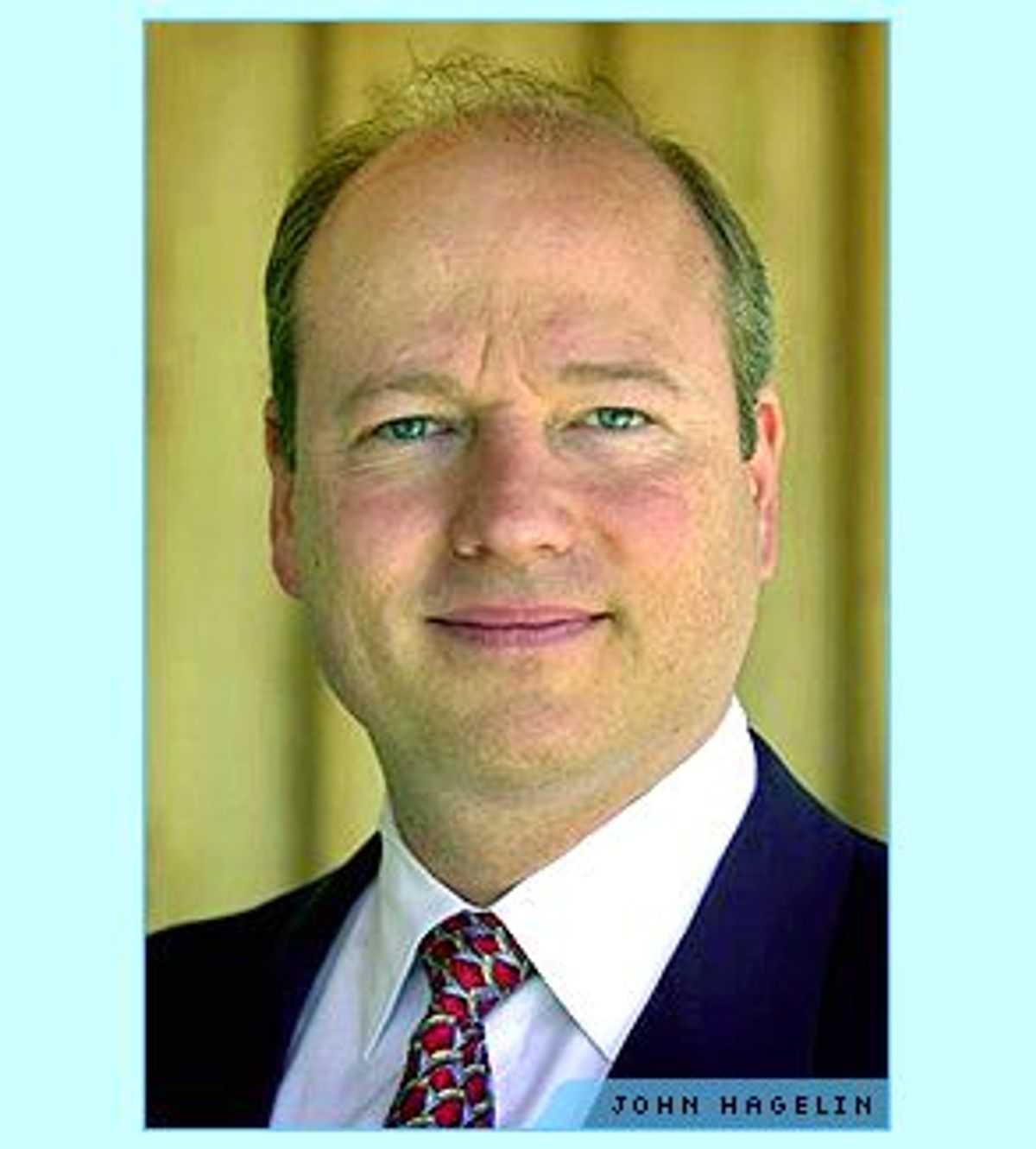 Today there is yet another outsider in our midst. In case you're not familiar with Reform Party (and Natural Law Party) presidential candidate John Hagelin -- and judging by a July 17 Reuters poll in which he got exactly zero percent of the vote, you're not -- let me tell you: He's a "roo." Lately Hagelin has tried to distance himself from his roo roots -- strategically understandable, but ultimately unfortunate. Because the roos, as politically maladroit as they may be, are good folk.

I grew up in Fairfield, Iowa, population 9,768. At 35 mph, it takes five minutes to pass through. It is the home of the Fairfield Trojanettes (state basketball champs, '83), a historic town square with a great Christmas-light display, a brand-new Burger King, an original John D. Rockefeller library building and a tiny little movie theater called the Co-Ed, where I worked as a teen.

Fairfield's also the home of the Maharishi University of Management and the Maharishi School of the Age of Enlightenment (preschool through 12th), an educational system based on, among other things, a system of deep rest and stress release called transcendental meditation. MUM, where Hagelin is a physics professor, was founded in 1979 by the Maharishi Mahesh Yogi -- who is best known as the guy who taught TM to the Beatles. The centerpiece of MUM is two enormous domes used for mass meditation, which can result, supposedly, in yogic flying -- a period of heightened awareness that manifests itself in high hopping or levitation. (Masters of this technique sometimes engage in "flying" contests that involve racing, high jumps and hurdles.)

In Fairfield, you are either a "townie" or a "roo," which is short for "guru" -- Fairfield slang for meditator. I was a townie and, like all townies, thought the roos were completely out of their minds.

The roo adults, being in touch with their mind-body connection and whatnot, were prime targets for townie ridicule. The women wore flowing hemp skirts, the men had long hair. They appreciated art (the freaks!) and they hung out in the lobby of the Co-Ed as I tried to close down, discussing the performances and cinematography. On occasion, I'd get really oddball requests -- one roo patron insisted that I plug in a digital clock somewhere in the theater, as it would help the film's "transmission." I never did figure that one out.

The roo kids were just as easy to spot. Many, being vegetarians, were skinny and pale. Some were foreign. Roo kids wore white MUM uniforms, had punk-rock hair, rode skateboards and listened to music we didn't like (or wouldn't discover until college). In a city of reasonable size, roos wouldn't have been given a second look, but in Fairfield, they were sideshow curiosities: raving street lunatics dining on spinach pie and room-temperature water and talking about building an ideal society.

Besides, we townies -- cruising around "the loop" in our Guess overalls, hair-sprayed bangs and rattail mullets, listening to the progressive sounds of Alabama and Whitesnake while chewing plugs of Skoal -- were, quite obviously, already the picture of Utopian civilization.

Townies drank beer to spice up what was essentially a monotonic existence. The roo kids did drugs, we speculated, to find respite from the cultlike atmosphere at MUM. Ignorant of our basic sameness, S.E. Hinton-style rumbles would result. If you were an oddsmaker, you'd favor the townies (hey, we were bigger), but, as any townie would concede, you could never count out the roos -- those crazy sumbitches were liable to go postal on your white butt.

In 1992, I attended one of the first Natural Law Party rallies in Fairfield, but only because the girl I was dating babysat for the family whose estate it was held on. The lawn was segmented into quadrants filled with representatives of each of the 50 states. There was a large stage with Hagelin's picture and the Natural Law Party logo, consisting of a rainbow and puffy blue clouds. Roos were everywhere -- more than I had ever dreamed existed. People were playing acoustic guitars. Couples in their 40s were kissing, for Pete's sake. I was 16 years old and had never seen anything like it.

Soon after, I started gritting my teeth when I heard the word "roo" at the kitchen table. (A couple of years later, in what should have been a foreseeable linguistic development, the roos reclaimed the word, and today call themselves "roos" with good-humored impunity. In fact, the roos have a history of subverting townie spite -- in the early '80s, roo-mocking "Fly Iowa" hats were a big hit with the roos, to the chagrin of the creators.)

This May, Fairfield townies were in an uproar when MUM tore down Parson's Hall. Not only was the building a remnant of the historic, townie-loved Parson's College (on whose grounds MUM now stands), but it was being torn down because its doors did not have an eastern orientation, which could have, as MUM executive vice president Craig Pearson said, "negative and damaging effects" on those working inside it.

This is part of "vastu," the art of building design that fosters health, happiness and prosperity. Vastu has inspired homeowners and shopkeepers all over Fairfield to board up their southern entrances and, in some cases, knock down entire walls. Some townies argued that Vedic architecture is derived from the Hindu religion and, therefore, destroying a federally funded campus building like Parson's Hall violated the separation of church and state. (A roo friend of mine commented, "People take the Maharishi too literally. Next he'll tell you to board up your north entrance, then your east and west. Only then will people realize that the only way out is up.")

Taking lifestyle cues from a peaceful, bearded spiritual leader who lives in a compound far away does have obvious religious overtones. MUM has always sort of floated around, so to speak, in that taboo territory between science and religion, although TM practitioners insist that TM is not a religion and only enhances any beliefs you already practice. "The Transcendental Meditation technique is automatic," says the MUM Web site. "It does not require any belief. It works for everyone." The fee to learn this all-inclusive technique: $1,000.

But meditators claim that they've scientifically proved their "crime vaccine" -- essentially, a gathering of meditators whose accumulated good energy lowers the crime rate of a given locale, like Washington, D.C. (July 1993), or Kosovo (August 1999). As a press release on the Web site states, "When the group reached about 350 Yogic Flyers, the [Kosovo] destruction ended."

On the other hand, in Fairfield -- where 20 percent of the population meditates on a daily basis -- "criminal arrests on drug charges, weapons charges and for drunken driving increased dramatically in 1999," according to the Fairfield Ledger. The town's overcrowded jail was forced to send prisoners to five other Iowa jails in late 1999.

Considering that the Reform Party has become a group of political X-Men -- fringe candidates whose mutant powers are not yet accepted by the human race -- a levitating nuclear physicist like Hagelin seems a perfect leader. Unfortunately, he may merely be in the right place at the right time: Some Republicans are backing Hagelin simply to prevent Pat Buchanan from getting the disputed Reform Party nomination (and the $12.6 million in federal funds that the Federal Election Commission is deciding which of the two candidates is entitled to). Of course, if Hagelin does get the nomination, there's no way he'll receive the 5 percent of the vote that would entitle the Reform Party to any future federal funds -- which could, in effect, bring an end to the party. Even in Jefferson County, where Fairfield is the only major township, Hagelin received only 23 percent of the presidential vote in 1992 and 21 percent in 1996.

Ominous Maharishi proclamations like "Democracy must be replaced by a system of administration that will create an integrated unified nation" and perplexing platform statements like "Natural law is the orderly principles -- the laws of nature -- that govern the functioning of nature everywhere, from atoms to ecosystems to galaxies" only succeed in frightening people. Instead of trying to push concepts such as the "crime vaccine" and "divine rule" (which, by most folks' common logic, leads to "divine rulers") on an unsuspecting America, perhaps the TM movement should spend more time disseminating the practical and personal uses of TM through more traditional outlets -- radio, magazines and the talk show circuit.

It saddens me to hear that MUM is now looking into breaking off into its own city (tentatively called "Golden"). Separating from Fairfield would not be a good sign -- if the roos can't reach a community understanding within Fairfield, Iowa, they can hardly expect to succeed politically on a national level.