Is women's basketball a kinder, gentler game? The WNBA shows that women aren't nicer than men -- but they aren't better, either. 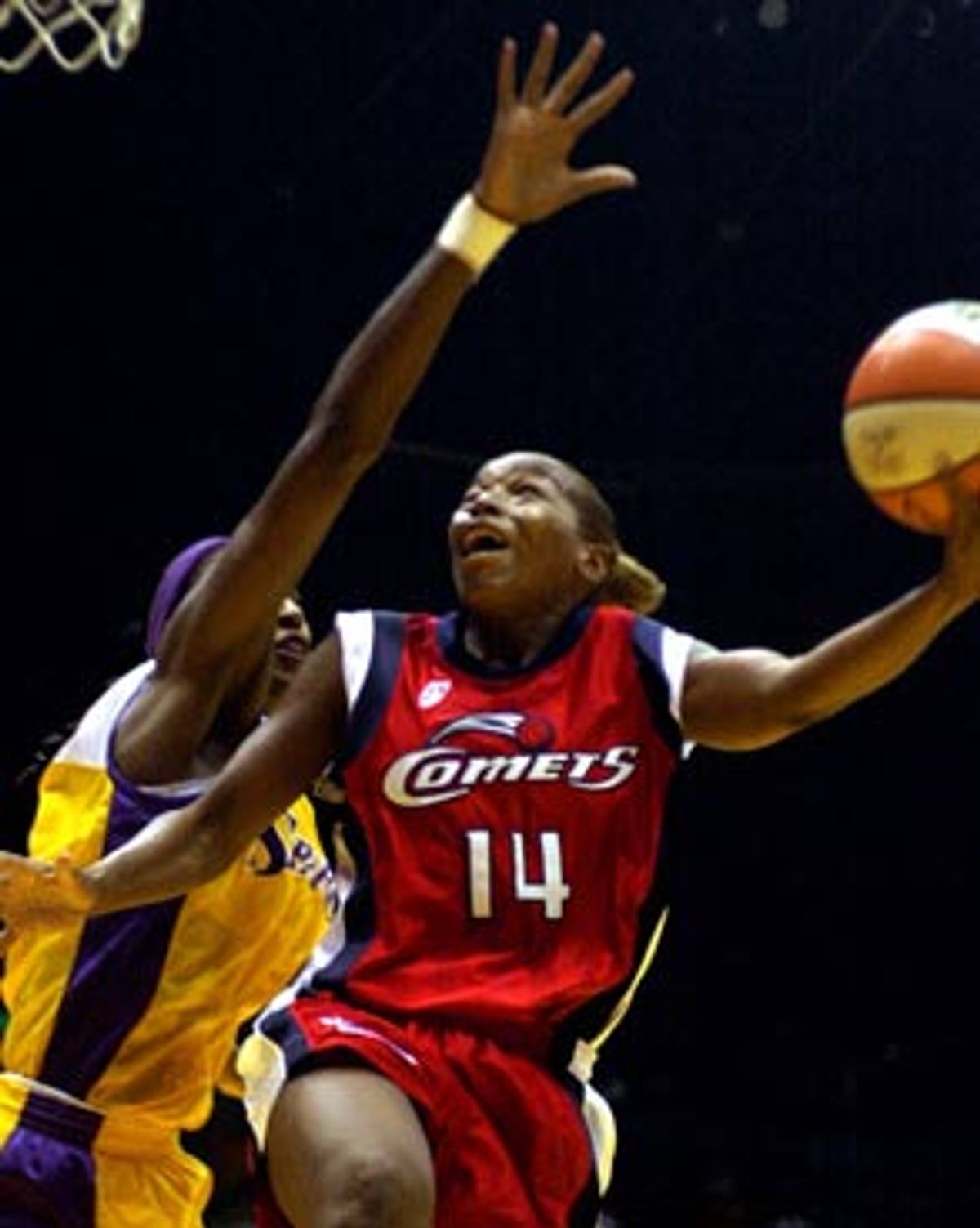 Once again, the New York Liberty and the Houston Comets are facing off in the National Women's Basketball Association championship finals, as they have three out of the past four years. And so far the only mystery has been whether the Comets -- the overwhelming favorites -- would win the three-game series in two games or three. (Houston beat New York 59-52 in Game 1 Thursday night.)

But the debate over the WNBA may be even more interesting than the playoffs. The league remains a battlefield for gender politics, and here, the arguments are as familiar as a Houston-New York championship series.

To the WNBA's detractors -- from anonymous Web surfers who post abusive messages in women's basketball chat rooms, to many sports radio talk-show hosts and a few conservative commentators -- the "league of their own" is an insidious exercise in political correctness, an attempt to shove a ridiculous pseudo-sport down the throats of the American public in the name of gender equity. After Slate, for instance, published an article praising the WNBA's dynasty, the Houston Comets, one response posted on the site's message boards derided the Comets' trophies as "glorified doorstops" while another rather graphically claimed that it was better to be "de-balled with a rusty spoon" than to watch a WNBA game. Last year, Debbie Schlussel, a columnist for the Jewish World Review, sneered that the WNBA should really stand for "Weird Nuisance Brought on America."

Others are less strident in their criticism and even generously credit the women's hard work and dedication, but still dismiss WNBA basketball as slow, sloppy and hopelessly below the rim.

Many WNBA defenders, meanwhile, feel compelled to assert that women's basketball is not just as good as the NBA, but better. The league, they declare, is basketball the way it should be -- an emphasis on team play and solid fundamental skills -- while the men's game has degenerated into showboating, trash-talking and clashes under the basket by superstars with super-sized egos. To WNBA defenders, the league's signature absence of dunking becomes a virtue: A slam-dunk, after all, has no purpose but to show off and to humiliate the opponent. Women, as we all know, are too nice for such things.

Some of this women-are-just-nicer corn syrup shows up in Slate's recent paean to the Houston Comets, titled "The Best Team in Sports." While William Saletan praises the Comets for making WNBA basketball less ladylike -- by forcing other teams to adapt to Houston's aggressive style of play -- he still credits certain womanly virtues with helping them win four straight titles. He says the Comets' "Big Three" -- two-time Most Valuable Player Cynthia Cooper, this year's MVP Sheryl Swoopes and underappreciated Tina Thompson -- have "held their egos in check" and worked together.

Reality check, please. The simple fact is that the women of the WNBA have not had to cope with the same temptations of fame and fortune as men's teams, for the simple reason that, like it or not, they don't get anything close to that kind of money or that kind of attention. When Cooper, 37, announced in July that she was retiring after this season -- an event that, in the context of the WNBA, was equivalent to Michael Jordan's retirement -- the news made no front-page headlines outside Houston.

But the women's game is no haven of ego-free harmony. When Cooper broke the news of her impending retirement, she suggested that she was unhappy with her somewhat diminished role after Swoopes had eclipsed her as the top scorer. All this apparently came as a shock to her teammates and her coach, Van Chancellor, and Cooper's statement was widely criticized ("The bottom line is that if Cooper can't be the biggest star on the team, she will take her ball and go home," wrote Michelle Smith at ESPN.com). Cooper later made comments that could be read as a retraction, but not before the controversy threw the team into disarray.

Even fists occasionally fly on the court in the WNBA. Near the end of Game 3 of last year's Western Conference finals, between the Sparks and the Comets, Cooper and Thompson taunted the losing Sparks, mocking the salute that Leslie and fellow Sparks star DeLisha Milton had used throughout the playoffs to celebrate successful plays. With emotions near the boiling point, Leslie suddenly charged Thompson, slamming her in the throat with both forearms. She had to be pulled aside and held down by several officials and teammates. Both Leslie and Thompson were ejected and later fined. (Earlier, during the 1999 regular season, several players of the Detroit Shock and the Cleveland Rockers were suspended after a scuffle broke out during a game.)

Is there more team play in the WNBA? Yes, for two reasons: Few players have the athleticism to break through the defense and put the ball in the basket on their own; and the women's league allows the zone defense, in which more than one defender can guard a player away from the ball. But here, the differences between the NBA and the WNBA have been overrated.

The ratio of assists to baskets is about the same in the men's and the women's games, and in both leagues, it's usually a few top players on a team who are responsible for most of the scoring. The reign of the Houston Comets, who have been blessed with the league's two best players (Swoopes and Cooper) and another who is unquestionably one of its top 10 (Thompson) shows that in the WNBA, too, superstars matter.

Indeed, while "unselfish basketball" is a term of praise in the men's game as well as the women's, one of the highest compliments in the WNBA is that a player can "create her own shot," splitting or going over the defense without being bailed out by her teammates. It's certainly true of Swoopes and Cooper, and of a growing number of younger players such as the Washington Mystics' Chamique Holdsclaw, New York's Tari Phillips or the Phoenix Mercury's Brandy Reed.

Is dunking far behind? While a number of WNBA players do dunk during practice, the elusive slam-dunk has yet to happen in a game. It is doubtful that this is because dunking just isn't nice to the opponent; anyone who doubts that the psychological destruction of the enemy is a part of women's basketball cannot have seen the Comets rout the Sparks in Game 1 of this year's conference finals.

One reason for the absence of dunks that in the women's game, defenders are not accustomed to clearing out from under the basket when a player goes up for a dunk, so the athletes and coaches legitimately fear the injuries that could result if one player landed hard on top of another.

Another irony, though, is that ego -- not the absence of it -- may play a major role in the failure to clear out to make way for the dunk: No one wants to be the first to be dunked on. A dunk -- probably by Leslie -- was widely expected during this year's WNBA's All-Star game, the second in the league's existence. It was prevented by a stifling, hacking defense from the East's overmatched All-Star team, more appropriate to the playoffs than to an exhibition game whose outcome does not count for anything. "Sorry, no one's dunking on us," Holdsclaw snapped in a media interview.

Weatherspoon was equally resolute: "It's all fun and games and everything, but we're not letting that happen." As Arizona Republic sports columnist Dan Bickley pointed out, the East's "competitive reflex" got in the way of an event that could have greatly raised the WNBA's appeal in the eyes of the average sports fan.

As the WNBA matures, the quality of the game -- often still shaky, though hardly without its own brand of speed, flash and athleticism -- will undoubtedly continue to improve. Already, it has improved well beyond the level of debut season 1997 -- due partly to more experience, partly to the infusion of new talent. Whether women's basketball can ever achieve a following equivalent to men's, as has happened in tennis, is something we probably won't know for a long time.

It is troubling that attendance this year dropped to an all-time low -- about 8,900 per game, down from 10,200 last year and about 9,700 in the first season. The drop is partly due to the fact that the season started early this year to accommodate the Olympics, and the start of the season overlapped with the NBA finals. Still, this raises questions about the WNBA's long-term ability to compete for a share of the sports market outside the increasingly restrictive confines of the short summer season.

On the other hand, there are also good signs. Television ratings are holding steady or improving, and this year twice as many people participated in the all-star balloting as last year.

It is certainly premature to raise the question of anything like equal pay for WNBA players, as track star Marion Jones did in a famous Nike commercial complaining that "sistahs" are getting paid less in pro sports, even though they work as hard as the men. The ad provoked a storm of controversy. Some sensibly argued that female athletes should get less money as long as they draw much smaller audiences; others chauvinistically tried to make the case that female athletes should get paid less no matter what, because they couldn't compete against men and are therefore inferior. Of course, if the WNBA ever draws anything close to the level of the NBA, the salary gap will narrow sharply.

Of course, there's a vicious cycle in all this: The limitations imposed on the WNBA by its short season and relatively small budget probably hurt the league's quality of play. The teams get to spend little time together in training camp, the games are often closely spaced together with little time to rest, and the fatigue factor is compounded by the fact that when the teams are on the road they fly commercial, not charter as in the NBA. On one occasion the New York Liberty had to delay a game and then start playing 10 minutes after arriving at the arena because of flight cancellations.

Not much can be done to change that in the near future. The WNBA simply has to compete harder for fans' attention. But its defenders don't help its cause by billing the league as kinder, gentler basketball. Increasingly, WNBA players have their elbows out, and that's what they need to do to muscle ahead in the fight for sports dollars.