I wanted a new pair of boobs. But how would I tell my daughters that their Barbie-bashing mom wants to look just like her? 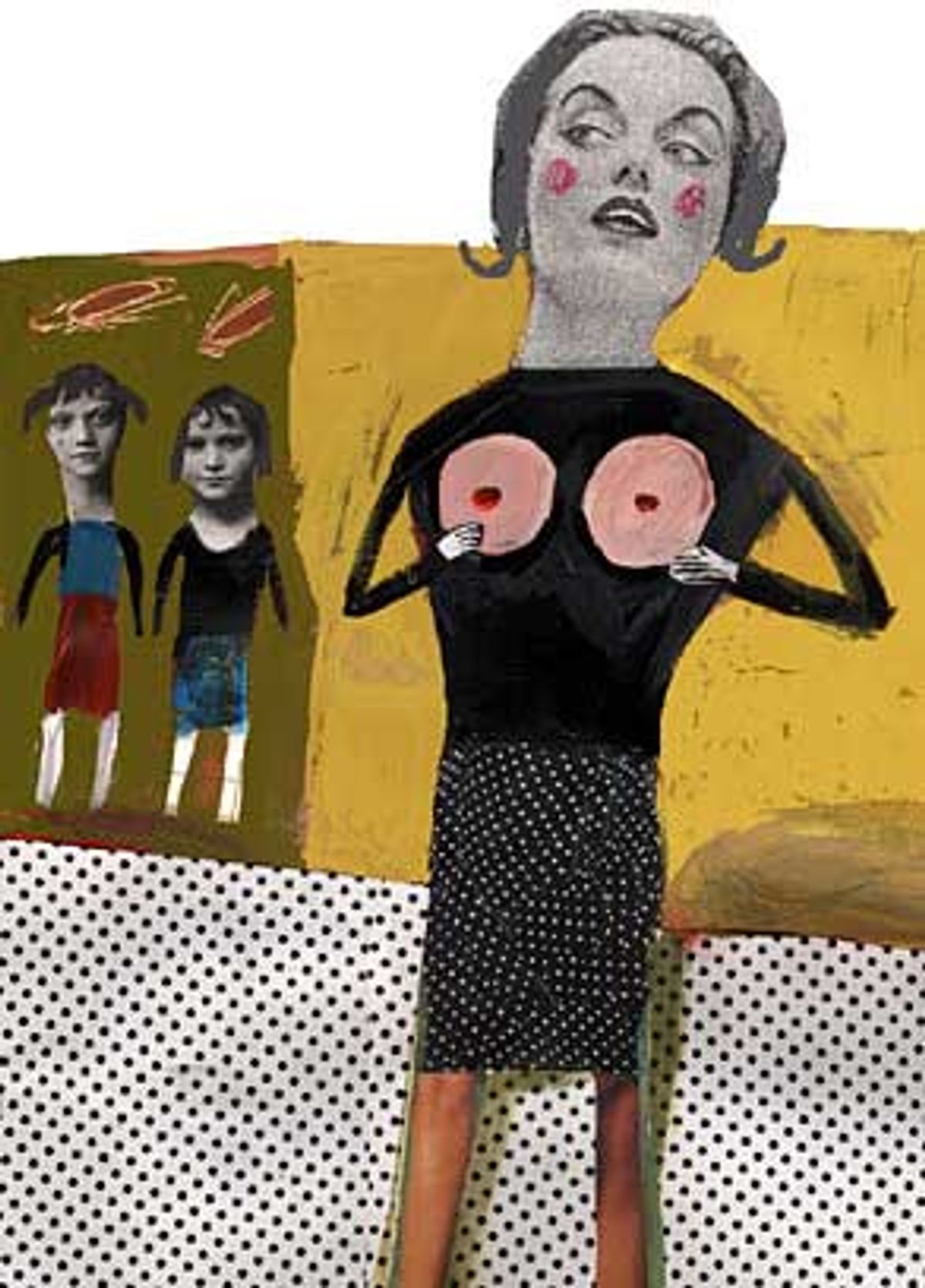 I have always been flat-chested. It didn't used to bother me. I was always more gamine than beach bimbo, more Audrey Hepburn than Pamela Anderson, anyway. But I do live in a "Baywatch" kind of town, and eventually, I started to realize that there was a reason that those who were stacked attracted more attention in their bikinis.

So, last spring, I started tossing around the idea of getting a boob job.

I consulted with my friends, family, husband and colleagues. I debated the issue with surgically enhanced feminists and flat-chested soccer moms.

But the two most important opinions were those of my 10- and 14-year-old daughters. Sure, it was my life and my decision, but they were at that impressionable age and I didn't want to give them the wrong impression.

I've always told my daughters that real feminism means the freedom to make your own choices. But I've also always been a Barbie-basher, and I am known for my fierce lectures during which I rip up fashion magazines, rant against Madison Avenue and preach the joy of accepting one's body just the way it is.

What to do? Can you be a good mother and a hypocrite at the same time?

Surgically enhanced mothers of young daughters tell me they struggled with the same issues but went ahead and had the procedure done anyway. Martyr mothers, my least favorite category of moms, said it would ruin my daughters for life and cause them to suffer from anorexia, low self-esteem and promiscuity.

Sigh. Surely I could wrest a decision from somewhere in the middle?

Why did I want big boobs, anyway? Was it a midlife crisis? I don't think so. I've been married to the same guy for 18 years and we have hot, frequent, innovative sex. Being a smart guy (as well as politic), he declared membership in the good-legs, tight-butt club years ago, assuring me that big, bouncy breasts were somewhat distasteful to him. His prepared statement on the boob question: "Do whatever you want to do. I'm behind any decision you make."

But then, on Valentine's Day, he casually dropped a bonus check into a card. "New boobs. Get them if you want them," he said.

I turned to my next source of male opinion, married guys. After all, these are the only kind of guys I know and I needed some unbiased opinions.

A smooth-talking attorney friend was the first to throw a cloud of doubt on the venture. This guy loves to ogle big-breasted women. We can't stroll down the beach without him asking every few seconds, "Are those real? Come on, they are real. Tell me, are they real?"

And I patiently point out, pair after perky pair, "Nope, they are not real. Trust me."

When I mentioned I might buy myself a pair of bosom buddies, he put his drink down and stared at me, completely shocked.

"No, no, no!" he protested, coughing, sputtering. "Not you. You are the least likely person to ever do something like that. You are," he sucked in his breath, concentrating hard to find the right words, "you are so, so, anti-cheesy."

Argggh, the cheese factor. It's what I've been dancing around the whole time. I've seen those women with athletic, svelte bodies who are suddenly wrecked by highflying, tall-standing, hard-looking boobs. As out of place as a hooker at an ordination.

He had zeroed right in on my deepest weakness, the fear of being cheesy. I can't bear the sight of blond hair with black roots, tanning-bed tans, cheap white shoes, blue eye shadow, TransAms, acrylic nails, lipstick on teeth, thongs and big hair. Not only would I be sending my daughters to the streets, but I would look the part when I bailed them out of jail.

Although I wasn't any closer to making a decision, I made an appointment with the plastic surgeon to talk things over. He was dry, factual and businesslike, and said I had to get the C cup.

"No," I said firmly, "I don't want a C cup. I want a B cup. I don't want to attract any attention with those puppies."

"My dear," he said laconically, "then why do you want them?"

That day, I made my decision. I scheduled the surgery and fled.

"But you've never cared before," pointed out a friend just recovering from breast reduction surgery. Most of my big, droopy-chested friends recoil at the thought that I want to add to something they want knocked off. "Why now?" she asked, staring enviously at my boys department T-shirt. I still had no answer.

Finally, one day, I was busted. My 14-year-old daughter overheard an entire boobs-or-no-boobs conversation.

"If it will make you feel better about yourself, then do it," she said primly, the product of years of public school self-esteem-building programs. Then she came up with the winning suggestion. "Wear a Water Bra and see how you like it."

Ah, outta the mouth of babes. Why didn't I think of that?

That was all it took. I wore a jiggly, C-cup Water Bra under Lycra shirts for a month.

It was amazing. It was incredible. Boys of all ages went positively loopy. At first, it was amusing. The kid at the fast-food joint, the guy at the grocery store, the friend at work and the pilot on the plane all became instant servants to my any whim.

Then it started to get a little irritating. Is this what I wanted? Men looking straight at my chest instead of my eyes? Strangers saying things like, "Are you happily married?"

There were other aggravations. Clothes looked cheap, buttons popped off blouses and all my T-shirts got stretched out. When I passed myself in a mirror, I thought: Whoa, who is that woman? And do I want to know her?

I noticed women were not as friendly. The saleslady at the Gap asked me how much they cost. The orthodontist's receptionist averted her eyes. It was somewhat disconcerting to be judged by a pair of knockers.

My daughters started to complain. "It's, like, so gross, Mom," said my young teenager right before she refused to go to the mall with me, the place where I was ogled the most. My 10-year-old put a pair of tennis balls in her bathing suit and glared at me in stony silence. I got the point.

Next, my husband started to get grouchy. "What is it with guys?" he snarled as the waiter stuttered through our order.

Closer to a decision, I strutted my stuff to lunch with the lawyer. Just for his viewing enjoyment, I wore a low-cut, slinky, black sundress. He stared at the gel-filled decoys.

But when he heard it was only an experiment, he cheered up. "So, you definitely are not going to do it?" he asked. Before I could answer, his eyes glazed over and his jaw went slack. The waitress, who was wearing a low-cut, slinky, black sundress, leaned over the table and put his tea in front of his plate. "Are they real?" he whispered.

"Not real," I assured him, lying through my teeth. He sighed.

The next morning, I canceled the surgery. That afternoon my 10-year-old confessed that she had thought I would die during surgery. That night my husband confessed that he really, really liked me the way I was. The next day, my teenager asked if she could borrow the Water Bra for her first day of school.

"Absolutely not," I said, and launched into a "Love your God-given body" lecture.