Give us baby butts and kitty pix! 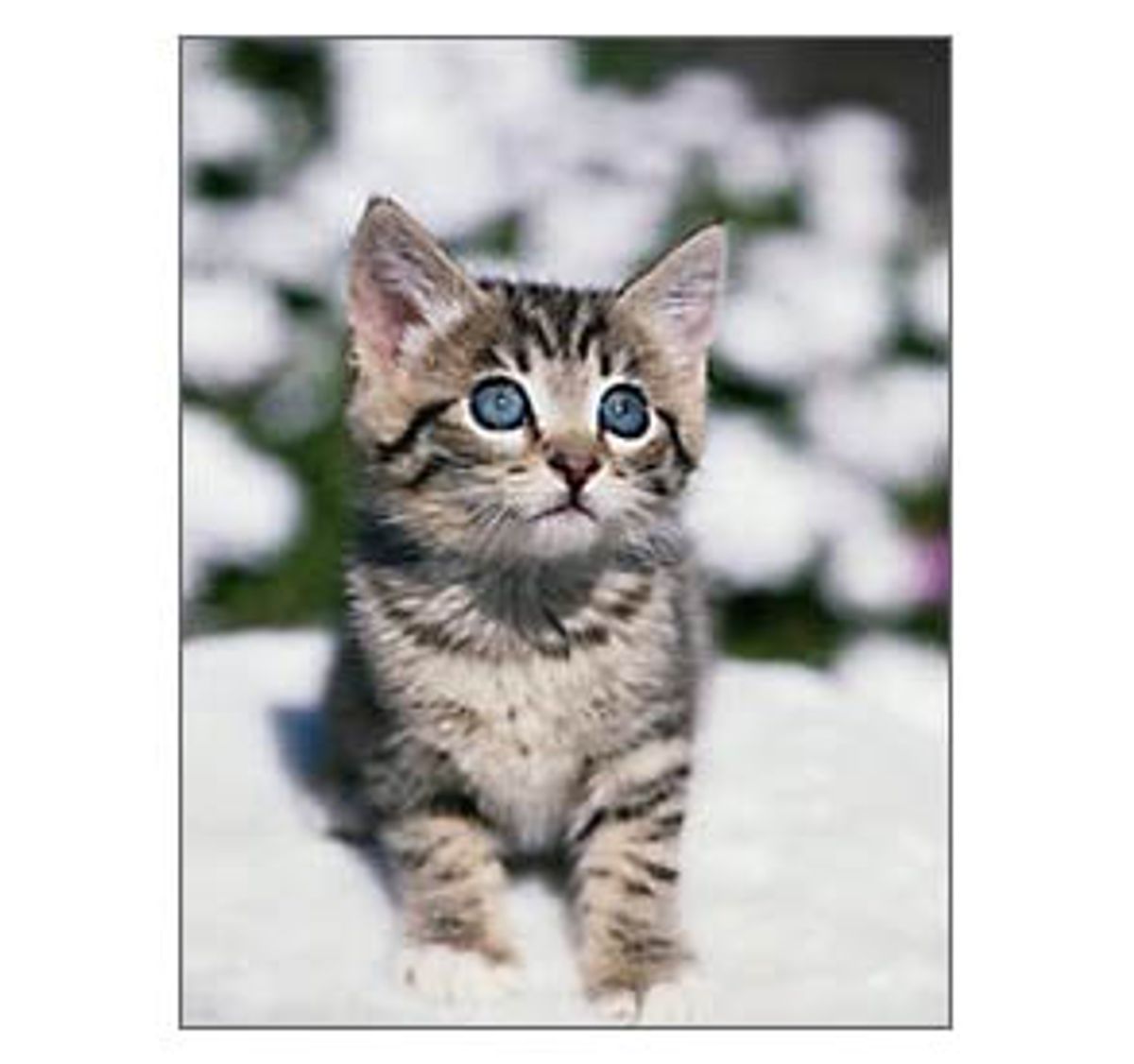 I've discovered the key to popularity on the Web, and it's shaking its bare ass in my face.

That's all there is to it -- a naked baby goofily juxtaposed with a snippet of a tune. Are you listening, struggling Net execs? For moronic humor like this, 6.7 million people a month visit Passthison.com, according to Media Metrix's latest data, making it the 38th most-popular "Web property" last month. All this comes courtesy of the infamous Sanford "Spamford" Wallace, the self-declared "king of spam," who's making a play to go legit -- sort of. He and his wife Lisa Wallace run Passthison.com out of their suburban Philadelphia home.

I'm always amazed by the oddities lurking in Media Metrix's count of the top 50 Web properties, ranked by visitors. Some are individual sites, while others are networks of sites owned by or affiliated with a large company. Of course the accuracy of Media Metrix's rankings has repeatedly been called into question. The numbers are projections based on a panel of users, not actual traffic measurements of every Web site. Yet, these are the numbers that industry executives, investors and advertisers rely on.

Naturally, the well-known Net brands such as Yahoo, eBay or Travelocity show up in the top 50. But every month when this ranking comes out, a smattering of sites I've never heard of -- but which apparently receive millions of visitors -- make the list.

Take for instance eUniverse Network, eFront Media, Network Commerce Inc. and Passthison.com. Some like Passthison have no outside funding and spend zero dollars on advertising, while the publicly traded Network Commerce has more than 650 employees. Yet, they both manage to lure millions of eyeballs.

Here's an eclectic tour of some of these unknown eyeball-mongers and a few clues about how they attract so many Web surfers.

Sanford Wallace, once one of the most reviled and unrepentant of all professional spammers, says he's discovered the straight and narrow road to doing business online, and it's paved with dorksville humor -- like the bare-assed baby -- and sentimental schlock.

"Passthison.com has proven that you can do things the correct way on the Internet without breaking any rules or having to establish new rules," he says, trying to distance the new site from his notorious past. Instead of serving up spam himself, Wallace now invites visitors to spam their friends -- you know, "viral marketing" -- and millions of people do. According to Media Metrix, the site had 6.7 million visitors in July. "It's some funny, stupid entertainment with the right delivery mechanism," Wallace crows.

There's a yuckster photo of a kitten giving the finger and a prank page that promises to generate a computer image of your face, but actually serves up a motley milange of grotesque male features with missing teeth and incongruous pigtails. Har-de-har-har. And these are hardly the lowest of the lowbrow offering. On the schmaltzy side, Passthison.com invites us to "spread the circle of friendship" with gooey inspirational poetry, coupled with photos of sunsets and mountain tops.

But snobbish content gripes aside, the site does a great job of encouraging visitors to forward whatever on it they find amusing. It's not very different from reams of other sites offering what essentially amounts to electronic postcards, but here you can conveniently pass on pages to up to 10 friends at a time, with a personalized message for each of them. It's the best explanation for the site's huge traffic: "The average person on our site who refers people refers at least six people," boasts Wallace. "It's like a pyramid scheme, except nobody loses money."

Despite no marketing expenditures, Wallace claims to be taking in close to $1 million a month from sponsored pop-up windows and advertising in the e-mail newsletter, which announces new features on the site.

But surely all those nice folks hoping to share a belly laugh or a syrupy smile don't realize that they're essentially turning over the e-mail addresses of loved ones and acquaintances to one of the Net's most infamous spammers.

Wallace insists he's changed his ways. He claims the site only e-mails visitors who've opted to be notified about what's new, then confirmed via e-mail that they're the correct recipient. Yet, before visitors leave the site, they have to wade through no fewer than three annoying pop-up windows -- one offering free film to encourage visitors to join this mailing list and two others touting the wares of sponsors.

It wasn't so long ago that Zapata, a Texas fish distributor turned Net company, drew giggles with its newspaper ads offering to "BUY YOUR WEB SITE!"

Today, eFront Media is quietly doing exactly that, driving it to No. 18 on the Media Metrix list, with 12.5 million visitors. The 14-month-old company is a huge roll-up of some 150 small content sites, ranging from gaming to tech news and loopy entertainment. They've bought up sites in France, England, Spain, Italy, Germany, China, Canada, Croatia and Sweden.

The company makes little if any changes to the sites, other than slapping on the eFront logo, then selling ads and other sponsorships as a network. There's nothing particularly notable about this business model, except that the company has raised less than $1 million in financing, yet still managed to gobble up sites -- and their traffic -- by offering equity and cash. eFront Media now has just 35 full-time employees and some 60 contractors who create the content.

"Our goal was to consolidate the highly fragmented Internet," says the charmingly brash Jerry Ziegler, president and "chief acquisitions officer." "The nice thing is, we haven't had to spend the money on the Super Bowl ads to get the visitors. We went from the ground up. We went to where the visitors were and bought those sites and built it from there."

Ziegler and his partners financed the company with $100,000 from their own pockets. "We've gotten where we got with basically no money and a bunch of guys that nobody ever heard of." They've since taken angel money (early financing), including from L.A. Lakers player Brian Shaw.

For the second quarter of this year, Ziegler says the company generated revenues of $1.5 million; last year, revenues averaged $400,000 per quarter. Based in Orange County, Calif., eFront also is looking for another round of financing between $5 million to $10 million. Eventually, it hopes to go public.

Like lots of other Net entrepreneurs, Ziegler and crew have grand plans for WWW domination. But whether they can build a business that lives up to its traffic remains to be seen. Still, the sheer audience they've managed to attract puts to shame the highly financed likes of Warner Brothers' Entertaindom or the leveraged-into-bankruptcy likes of DEN.

Ziegler says he works 100 hours a week doing deals to buy sites, which doesn't leave a lot of time for the dot-com party circuit. "We don't really have time to go out and be social with the companies that are losing money."

The Seattle-based Network Commerce serves as a holding company for six sites, including the popular gaming site, SpeedyClick. After receiving $3 million in venture capital and $70 million in private placement financing, it went public last fall. Despite being No. 34 on the Media Metrix list, with some 7.3 million visitors, the stock now trades just above $5 per share, down from a high of more than $25 last December.

The reason you've never heard of Network Commerce is simple: It changed its name in May from ShopNow, another of its sites. Founded by former Microsoft executive Dwayne Walker, the company focuses on creating sites and technology for small-to-medium-sized businesses. It uses its consumer sites, such as SpeedyClick, as a source of technology to sell to its business customers, and as a place on the Web to reach customers.

The firm positions itself as a business-to-business company with a consumer component. SpeedyClick is by far its biggest attraction, accounting for more than all its other traffic combined. The site offers lighthearted polls and games like Keno, blackjack and SpeedyLotto. Players are rewarded with "SpeedyBucks," which function like frequent-flier miles and can redeemed at an auction for prizes or be used to gamble on the site.

It's cheesy, but sort of ingenious -- the site sucks you in with this money (good only at the site, of course) and even makes spending it a ploy to keep you there longer.

Vice president Hannah Cohn says Network Commerce, which bought the site last November, is trying to take what's "sticky" about it and sell it as a service to merchants trying to build traffic at their own sites.

I can see it now -- thousands of sites all giving out fake money. This could be just what the beleaguered Net business needs. Now, if only those "bucks" were redeemable for office space, engineers' salaries, server space ...

Finally, the reigning king of the unknowns at No. 13 with 13.5 million visitors is L.A.-based eUniverse Network. If you haven't heard of it, it's because, like eFront Media, it's a conglomeration of many popular individual sites that the company acquired. Focused on interactive entertainment -- games and "fun page" ` la Passthison.com -- eUniverse owns some 20 sites with everything from the well-known multiplayer gaming league site Case's Ladder to DebsFunPages.

The publicly traded company reported first-quarter revenues of $5.8 million, an increase of 187 percent over the previous year. But the stock now trades at about $5, down from a February high of $13.

Shawn Gold, co-president and chief strategic officer who just started with eUniverse two weeks ago, is a Net industry veteran who worked on the highbrow content site, Word. But Gold has a lesson for everyone who turns up their noses at eUniverse's folksy web sites like BigFatBaby.com, whose chuckle-inducing content includes "You just got mooned!" and features a photo of some fat-bottoms showing off their butt cracks, or advice on "How to wash the cat."

"I'm cynical. I'm from New York City. I've been in the Net business since 1992. I don't open jokes in my e-mail box," Gold says. "But the folks creating this content are organic to the medium. They're very close to their audiences. They're not flashy. They're from Connecticut and St. Louis -- a lot of really nice people."

And wasn't that what the Net was supposed to be about? Wasn't it supposed to bring us entertainment created by "real" people instead of the faceless "media elite" ghettoized on the pricey coasts, churning out what they think the masses want?

Maybe butt gags and silly kitty jokes are truly mass media, since they're actually created by the masses. They certainly seem to be winning the Web popularity contest. So bring on the gyrating babies' butts, I say. Up the revolution!