After I die, I want maggots to eat away my flesh so my skeleton can be used for research purposes. 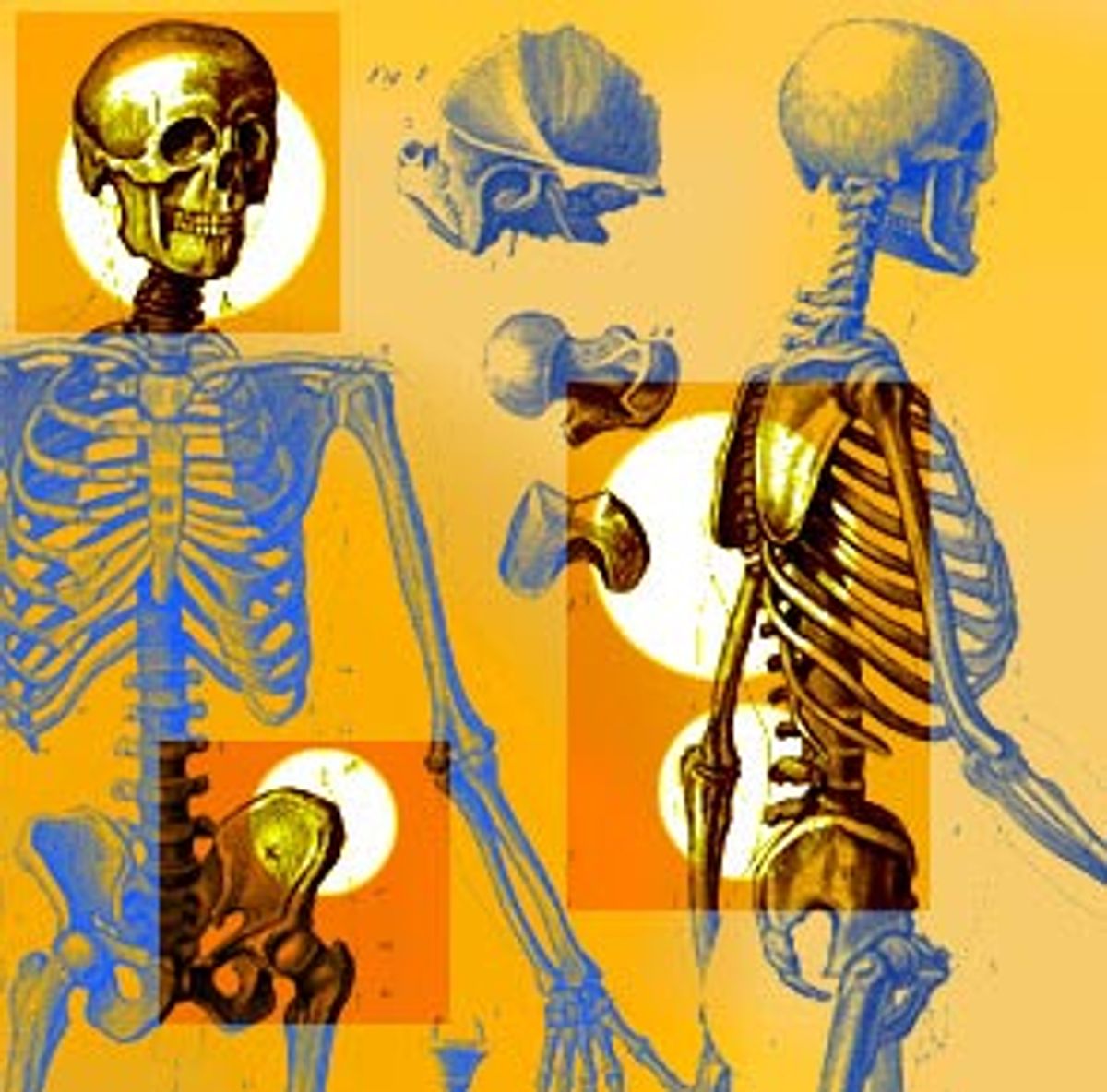 I'm sitting in Susan Wallace's Baylor University lab, where human skulls and bones decorate counters, and flesh-eating insects adorn glass cases. It's mid-September 1999, and I have traveled to Waco, Texas, from Milwaukee so she can show me examples of how to properly rid skeletons of their flesh. To demonstrate, Wallace lifts a meaty red pig spine out of a glass box. Fat maggots, hard at work, cover the spine. Wallace, who isn't wearing gloves, flicks the maggots off the spine using a dental probe. She then reaches over to hand me a lower human jaw with one gold molar. The 50-year-old forensic anthropologist doesn't even pause as she does all this, enabling us to continue talking about our common passion -- donating our skeletons for anatomical study -- without so much as skipping a syllable.

You may be thinking all we'd need to do is contact the closest medical school. This isn't the case. Although many people donate their bodies each year to science, it is not easy to salvage their skeletons for research purposes. As Roger Haushalter, anatomical curator of the Medical College of Wisconsin, explained to me, bodies donated to science have the "flesh cemented to the bone in the embalming process." If a gross anatomy lab wanted a skeleton, it would have to neutralize the formaldehyde, use bugs or chemicals to clean the flesh away and carefully wire the bones back together again. Even then, the bones, degraded by formaldehyde, would be inferior specimens. This is why most cadavers end up being cremated.

In 1985, India banned the export of skeletons to foreign countries. Before this, it was the supplier of more than 80 percent of the world's human skulls and skeletons. There is a shortage in the United States as a result. Doctors and those studying the fine anatomical details of skeletons worry about a generation of medical and dental students relying increasingly on plastic replicas instead of the real thing to learn about bones and how disease affects them. The Medical College of Wisconsin's collection, for example, has dwindled over the last 15 years from 20 skeletons to six. Studying real skeletons help doctors understand everything from how certain cancers attack the bone to diagnosing rickets more accurately. It also helps physical therapists, forensic pathologists, physical anthropologists and even art students in their work. Companies who design surgical and prosthetic equipment are also aided by real skeletons.

"So much detail is lost with plastic replicas," Wallace says as she explains the difference between the two. "Characteristics unique to each individual are not visible, thus limiting the information a student can learn from examining the bones." No one has yet to develop a way to mold a realistic plastic reproduction. The tiny canals in the cranium, and the fine bones in the nasal passage are among the most difficult to copy.

Hugh A. Patterson feels the skeleton shortage firsthand. The University of California at San Francisco anatomy professor says that although he would like to buy more skeletons for his students, he can't afford it. "The costs are prohibitive," he says. Skeletons before 1985 cost under $500, but with this crisis, they are now retailing for more than $2,000. Instead, he keeps repairing the school's badly worn specimens. Ever since India banned their export and exposed the world to how many skeletons are reportedly obtained -- through practices like grave robbing, instead of donation -- many researchers are wary to add to their university's collections. "I question whether the source of replacement skeletons is legitimate and ethical because most skeletons are imported from other countries," Patterson says.

There is no clearinghouse for skeletons in the United States. And Wallace and I are devoted to establishing one. No, we're not morbid, and we don't have that big of a fascination with death, but we believe if we were to set up a place, others could donate their skeleton for research purposes with greater ease. We hope this will also assuage the skeletal shortage and ensure that the skeletons that end up in our labs and classrooms aren't ones obtained through grave robbing.

The facility would publicize the need for donors, accept donated bodies, process them, maintain a registry and distribute skeletons to educational institutions. Without the current practice of imported skeletons passing through a series of suppliers, each tacking on overhead charges, the price of skeletons would come down substantially.

Right now, this site is just a dream of mine, and not a dream I ever imagined having. Like many others, I never thought about skeletons much, except during Halloween, until I started art modeling part-time at colleges around Milwaukee in the '90s. During figure-drawing classes devoted to anatomy, instructors often use live models as well as skeletons to illustrate their lectures. I found the uniform, Rubbermaid-white plastic facsimiles lifeless, but I developed a collegial fondness for real skeletons, with their diversity of color, texture and form. Then, at a retirement party for a local art model, he mentioned planning to bequeath his skeleton to an art school after he died so art students could continue drawing him. The idea sounded good to me too.

This became a quest when I stumbled upon the skeleton crisis while posing for a class in 1995. I overheard a teacher complain about the difficulty of obtaining real skeletons. I began to investigate whether I could give my own bones to the Milwaukee Institute of Art and Design. The school's president accepted my gift, assuming I can arrange the details.

It's been five years now, and after spending hundreds of hours trying to figure out how to do it, I learned how difficult it is to simply give the gift of your bones. I called around the country to anatomists, as well as physical and forensic anthropologists, to find out who might macerate my body and take an interest in starting up a national facility. These calls finally led me to Wallace. She has the expertise and dedication the task requires.

Wallace learned the hard way about the complexity of skeletonizing, or macerating, a body. Three summers ago, the police called her to help determine a murder victim's cause of death. The boy's body had lain undetected for seven weeks; it was so badly decomposed a mortician could do nothing to make it presentable for a funeral. The mother agreed to let Wallace have her son's body to use for educational purposes. Since Wallace didn't have a lab at the time, she transported the body to a local funeral home, where the mortician soaked it in ammonia for four days. He complained it stank too much, so Wallace took over. She simmered the bones in her backyard barbecue pit. "It smelled horrendous," she recalled. After nine hours, the bones still weren't clean, and the hands kept rising eerily to the surface. For days, she kept the bones stewing on a hot plate and finally commandeered a student to finish pulling off all the tendons. This was the boy's jaw that I held during our first meeting last September; it was so identifiable with its gold molar.

Schools, for many decades, have purchased imported skeletons through distribution companies. Not many people who order skeletons ask where they come from and, as a result, schools have tacitly supported grave robbing all over the world.

Now, companies such as Oklahoma City's Skulls Unlimited fill in as skeleton distributors. Skulls Unlimited touts itself as "The World's Leading Supplier of Osteological Specimens." Office manager Michelle Donaldson told me over the phone last year that all their skeletons come from "20- to 100-year-old abandoned burial sites in Asia." She confirmed that many come from the Cambodian killing fields and even gave me a quick lesson on the topic. "You can tell because they often are missing their lower mandibles and teeth, and you can even see the markings of earth on some of the bones," she explained.

Although most people don't know about them, there are a few places in the United States that accept bequeathed bodies for maceration. For example, the Maxwell Museum of Anthropology at the University of New Mexico would be happy to send you a donation form so you can "be permanently preserved in the form of a skeleton," as long as you are over 18 years of age. The museum uses those skeletons for teaching and research purposes.

Or, if you wanted to have the decomposition of your corpse studied, you could donate your body to the decay rate facility through the University of Tennessee-Knoxville Department of Anthropology. At the three-acre fenced-off lot, better known as the "body farm," you might be partially buried or left in a car trunk to analyze exactly how people rot under varying crime scene circumstances.

However valuable the endeavors at these facilities, they aren't equipped or interested in taking on the broader responsibility of a national site. After her grisly experience with the barbecue pit, for instance, Wallace realized the need to determine the most efficient maceration process.

Of course, any site would need to comply with federal health regulations and oversight from some federal department. Wallace and I believe it could take federal legislation to formally approve and designate the facility, and perhaps some funding for the initial development and construction costs. With a site up and running, the federal government could ban the import of skeletons from other countries, unless the importer could prove the skeletons resulted from a donation process similar to the United States.

Some people have asked me whether enough donors would come forward to warrant a national facility. It might take an initial nationwide educational campaign, but with more awareness, enough bequests would surely follow. After an article I wrote appeared in a small Madison, Wis., newspaper, 10 people contacted me because they were interested in donating their skeletons.

One of the women who called me has osteogenesis imperfecta (OI), a condition known as brittle bones. Many children with the disease do not survive past infancy. However, Gretchen (not her real name), now 48, has a mild case. Gretchen was misdiagnosed for years and has endured multiple surgeries, fractures and intense chronic pain. She walks on crutches and occasionally uses a wheelchair. "I'm disappointed but not surprised there are no skeletons to show this particular disease to medical students, since OI is so rare," she says. "Eighty percent of the stress fractures don't show up [through X-rays]." Gretchen wants doctors to see the results of "years of stress on weak bones and how bones remodel around metal implants ... I think my skeleton could be very instructive to medical students."

If Wallace's proposed procedure becomes standard practice at a national site, I anticipate that after Gretchen or I die, a mortician would bag us with some ice and ship our decomposing bodies to Waco. A technician would place our bodies on a grate inside a large glass box with vermiculite on the bottom. The technician would add thousands of blowflies. They would lay their eggs on us, and within hours the eggs would hatch as maggots and devour our flesh. The maggots would turn into flies and get trapped as they tried to fly out the top of the box. It might take a couple of different types of blowfly maggots to clean us off. After several days, a technician would lift us out of the box and wash off our bones with distilled water. Our skeletons would then be ready for many years of use.