Out on a limb

A New York psychologist searches for a hospital to allow his healthy right leg to be cut off after a Scottish facility refuses. 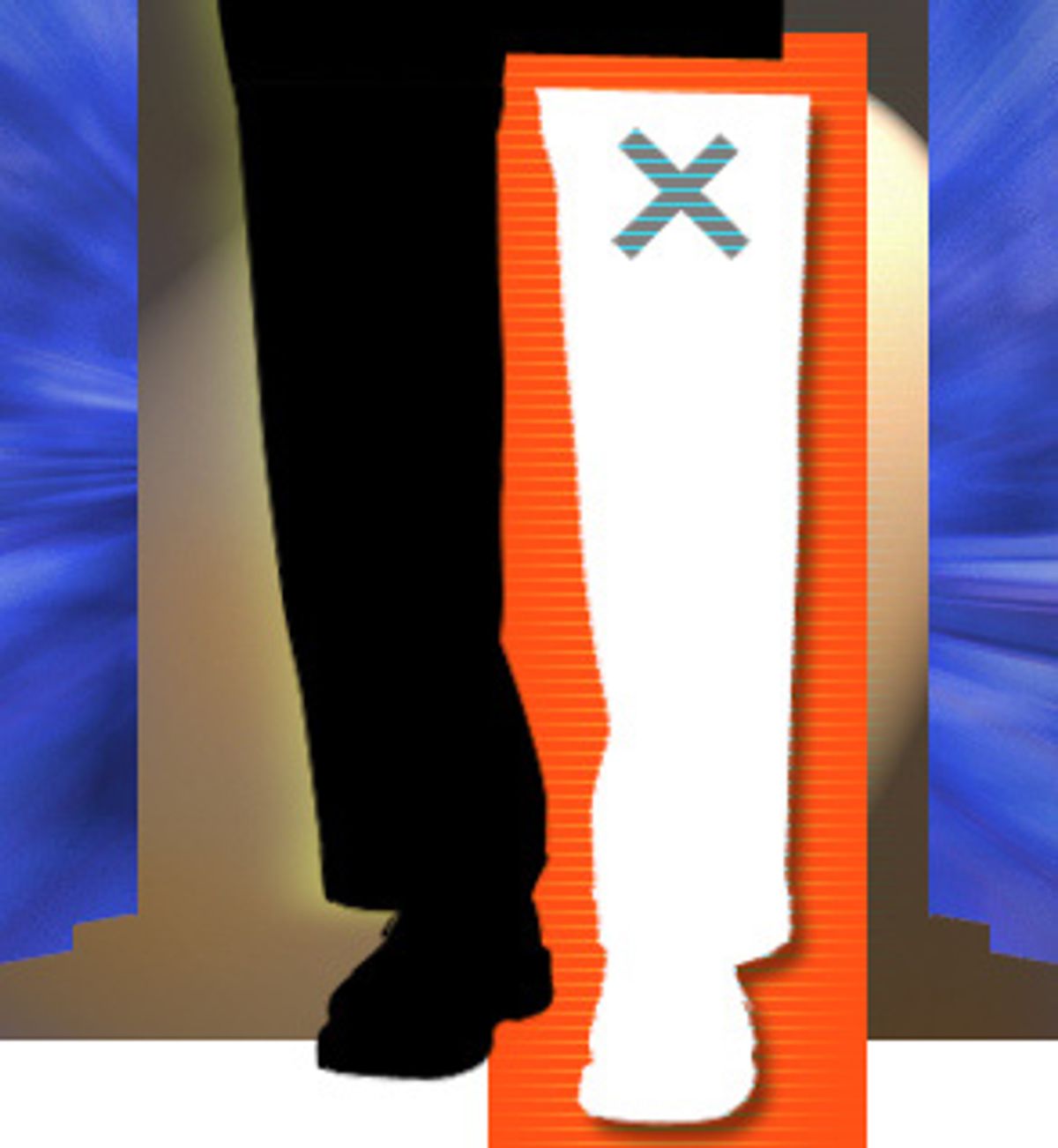 For just about everyone, losing a limb is a fate too horrible to imagine. But for New York psychoanalyst Gregg Furth, the amputation of his right leg would be a dream come true.

Not that there's anything wrong with his leg. It works properly and he walks like anyone else. It's his brain that's broken.

Furth suffers from an extremely rare disorder whose victims are obsessed with the amputation of their own healthy limbs. For decades, he has tried to find a doctor willing to take up a knife and chop off his right leg so he can feel, for the first time, like an intact person. "It's about becoming whole, not becoming disabled," he said. "You have this foreign body, and you want to get rid of it."

Last year his quest led him to Scotland to see Dr. Robert Smith, a surgeon who has performed two amputations on healthy limbs. Smith agreed to operate on him after three psychologists reviewed Furth's case, and the two wrote a book about the disorder.

But Furth's luck ran out. The public hospital where Smith performed the earlier operations backed out amid bad publicity. Then on Aug. 25, a private Scottish facility rejected Smith's request that he be allowed to perform operations there.

Now appalled Scottish politicians are clamoring for laws banning the amputations and creating a media flurry in the U.K. Dennis Canavan, a member of Scotland's parliament, told a newspaper last week that the surgery is "obscene" and demanded an investigation by health officials. "The whole thing is repugnant and legislation needs to be brought in now to outlaw this," said Canavan, who represents the Falkirk region, home to a hospital that allowed two amputations of healthy limbs.

Stung by his critics, Smith, who reportedly has six other patients lined up for healthy-limb removal, warned of dire consequences for his patients. "They may take the law into their own hands, they may lie on a railway line and get run over by a train. They may use shotguns and shoot their limbs off," he told reporters recently. "They are really quite a desperate bunch."

Meanwhile, officials at the private hospital are suggesting that the surgeries be done at a university facility instead. "We're not unsympathetic to what's happening, but unfortunately we don't think this is the right hospital for the procedure," said hospital manager Beth Martin.

Furth in turn contended that the British press misrepresented the hospital's decision as a rejection of an operation on him. Smith did not make a specific request about a patient, said Furth, so they could not have been rejecting his procedure.

Could there really be a public debate on the viability and ethics of cutting off healthy limbs?

"It's meshugeneh -- absolutely nuts," said medical ethicist Arthur Caplan, turning to Yiddish. "It's absolute, utter lunacy to go along with a request to maim somebody."

Caplan, the director of the University of Pennsylvania's Center for Bioethics, explained that such an amputation would violate the Hippocratic Oath in the extreme. "The cure is not to yield to the illness and conform to the obsession. And this is not just about 'do no harm.' It's also about whether (sufferers) are competent to make a decision when they're running around saying, 'Chop my leg off.'"

While the fate of Furth's leg hangs in the balance, his public plight has shined a light into the dark world of amputation obsession. No one knows how many people live their lives in hope of cutting off a healthy limb, but Furth says he knows of about 200. Among the annals of abnormal psychology, mentions of the disorder -- known as apotemnophilia -- lurk in footnotes and a handful of academic papers.

"I'm not an expert in this. Nobody is," said Dr. Katharine Phillips, a Brown University psychology professor and leading authority on body dysmorphic disorder, a much more common condition in which people cannot accept their bodies. Sometimes those afflicted with the disorder take drastic measures -- including unnecessary plastic surgery and self-mutilation -- to try to fix body parts they think are deformed.

Some amputation hopefuls say their condition is a type of body dysmorphic disorder, but Phillips isn't so sure. "My patients are not trying to get rid of a body part. They're just trying to make it look better," she said.

The guru of apotemnophilia, if there is one, is John Money, an expert in sexuality and professor emeritus at Johns Hopkins University. In 1977, he coined the word and defined the disorder as a kind of extreme sexual fetish. Apotemnophilia victims, he wrote, want to cut off their limbs so they can have better sex.

Sufferers like Furth downplay the sexual angle, and he prefers to use another term, "body identity transfer." But for more than a century, medical experts have written about people who are sexually obsessed with amputation, said Richard L. Bruno, a specialist in brain-body disorders -- known as a psychophysiologist -- who runs a program for polio survivors in New Jersey.

Entire Web sites are devoted to nude people missing their arms or legs. Most aficionados are men who love to gawk at female amputees, Bruno said. But there is also a gay community and groups for those turned on by leg braces, deformed feet and bunions.

Bruno, who studies the amputation-obsessed community's coming-out in the age of the Internet, said three groups have developed. The "devotees" love amputees, and some are so obsessed that they'll stalk disabled women in shopping malls. The "wannabes" hope to become amputees and the "pretenders" use wheelchairs and crutches to feign disability.

Wannabes are similar to people who suffer from gender-identity disorder and want to change their sex, Bruno said. "Apotemnophilia is the result of individuals believing that the only way they can be loved is by being an amputee."

Some sufferers do appear to be sexually frustrated. A documentary that aired this month on the Discovery Health Channel profiled a Los Angeles woman named Corinne who wants both her legs amputated above the knee.

Corinne admitted she's never had a normal sexual relationship. "For me, sexuality is being comfortable with my body," she said. "Inside, I feel my legs don't belong to me and they shouldn't be there. There is just an overwhelming sense of despair sometimes. I don't want to die, but there are times I don't want to keep living in a body that doesn't feel like mine."

Furth, 55, has not publicly discussed his own sex life. "Everybody's projecting their stuff into it, and they don't understand. It's not about sex, it's not about getting off with someone," he said. "It's about becoming able-bodied."

With his salt-and-pepper hair and mild, soft-spoken manner, Furth seems an unlikely poster boy for a bizarre mental disorder. He looks like a man who would work well with kids. And indeed he does. He is a Jungian analyst who specializes in counseling terminally ill children. Furth has written a book about the importance of art therapy, and he advocates the use of play therapy to test the mental health of children. In June, he was scheduled to make a presentation about Jungian analysis at the Swiss Embassy in Washington.

Furth has been infuriated by what he considers to be incompetent media coverage of his disorder and only agreed to a brief, antagonistic interview with Salon. But he did talk extensively about his life in testimony before a San Diego jury last year.

Furth has wanted to cut off his "alien" leg since the age of 4 or 5. Like his fellow sufferers, his feelings began after he saw an amputee in public. He has long searched for "fringe doctors" to remove his leg, figuring a specialist in unusual surgeries might be willing to take on an amputation. So he was thrilled to read a story about an underground surgeon in San Diego who specialized in secretive sex-change operations.

Unknown to Furth, this surgeon had a nickname in the San Diego area: "Butcher Brown." He had a gory history of botching transsexual operations, and he spent time in prison for operating without a license. But John Ronald Brown, 77, was willing to perform an amputation, as long as the operation took place in Mexico.

"He saw it as all the same. You cut off a boob, you cut off a penis, you cut off a leg," said Stacy Running, a hard-nosed San Diego deputy district attorney who prosecuted Brown months later.

Furth's operation never took place. In the first attempt, a Mexican doctor backed out. The second time, as the price rose to $10,000 from $3,000, Furth panicked after seeing an assistant carrying a large knife. "I realized that was not where I wanted to be," he said.

But the doctor's work wasn't done. Furth had traveled to San Diego with a friend, 80-year-old Philip Bondy of New York, who shared the same condition. They had met each other through the amputation-obsession grapevine 26 years earlier.

On May 9, 1998, Bondy went to a Tijuana, Mexico, clinic where Brown cut off his leg. Bondy was delighted, Furth said, and he returned to California, where he checked into a Holiday Inn motel. Furth talked to him by phone and became worried by his friend's raspy voice and his refusal to eat.

Furth flew to San Diego and checked into the motel. The next morning, he found Bondy in his bed dead of gangrene, the victim of the surgeon's carelessness and lack of medical attention.

Prosecutors, appalled by Brown's recklessness, soon accused him of second-degree murder -- an unusually extreme charge in a medical case. Furth, who had at first told police that Bondy died of car accident injuries, received immunity in exchange for his testimony. When he walked into the courtroom, spectators craned to see if he still had his legs. He did.

Brown's attorney said the doctor was a savior to people shunned by society. As for his client's medical skills, the attorney said the victims knew "that they weren't checking into the Mayo Clinic." The jury wasn't swayed. Brown was convicted and sentenced to 15 years to life in prison.

Furth has vowed to continue his hunt for a surgeon. But Bruno, the New Jersey psychophysiologist, said amputation "will not solve the problem of being loved." He thinks sufferers should turn to psychotherapy and antidepressants that have been useful in treating obsessive compulsive disorder, which seems to be related to amputation obsession.

Furth said therapy will only work in some cases. "Psychotherapy for some individuals is fine, like AA is great for some drunks."

It's unclear if doctors can legally perform physically unnecessary amputations in the United States. Stacy Running, the San Diego prosecutor, said she knows of no law that would prevent a licensed doctor from performing an amputation on a healthy limb.

Running has kept in close contact with Furth, and the two have a friendly relationship. But she still doesn't understand his illness. While preparing Furth for his testimony last year she grappled with the fate he was wishing upon himself.

"He was in my office with his legs crossed like men do, balancing books and his notes in his lap," she recalled. "I looked at him and said you're not going to be able to do that after the surgery."

Furth's response was short and sweet. "You're incorrigible," he said. Then he continued trying to find a doctor to save his mind by sacrificing his leg.

Randy Dotinga is a freelance medical and crime reporter living in San Diego.