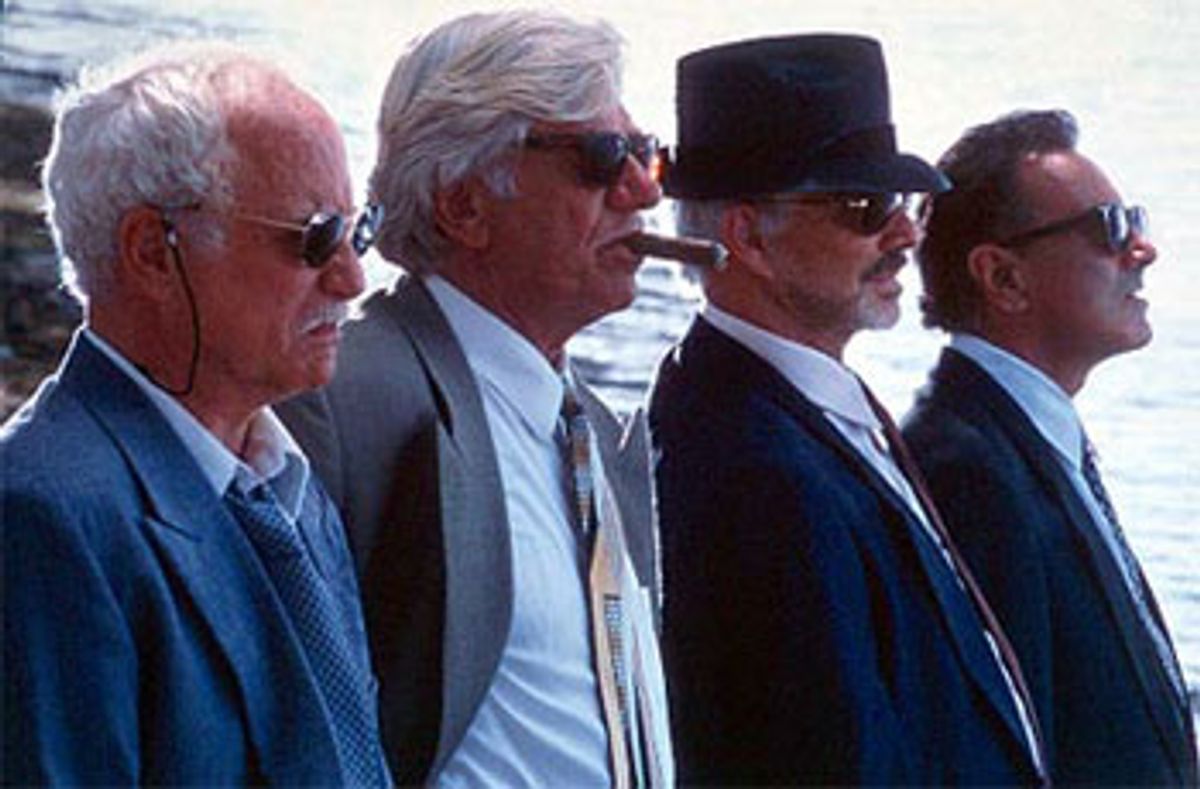 Late-summer comedies, the pictures that studios slip into their release schedules after all the big seasonal blockbusters have made their millions, are a little like the clowns at the end of a parade of giant floats. They can be deeply disappointing, anticlimactic curlicues following too closely on the heels of a series of exhausting movies-as-events. Or, in the case of Michael Dinner's slight but gently pleasing comedy "The Crew," those movies can be a relief. This picture about aging ex-mobsters in Miami doesn't pretend to be more than it is, nor does it apologize for its rather modest ambitions. It's sunny and cheerful without coming off as too saccharine -- a pleasant enough way for a senior citizen to while away an afternoon, but also the sort of thing that a poor working stiff might duck out on the job to see.

We're introduced to the four lead characters in a flashback to 1968; they're described in a voice-over (one of the picture's nods to "GoodFellas") from the group's leader Bobby (Richard Dreyfuss) as they tool around in a flashy Cadillac convertible, self-importantly and somewhat haplessly going about the business of being wiseguys, feeling on top of the world. Bobby is the only one of the four who doesn't have a nickname: Dan Hedaya is the sweet but dopey one who goes by The Brick; Seymour Cassel is a ladies' man and ace arsonist who doesn't have much to say and is thus called The Mouth; and Burt Reynolds is the hot-tempered one with a penchant for whacking people and things with a Louisville Slugger -- he's called Bats.

When the movie cuts to the present, the four are still driving around in the same Caddy, which is now only slightly more beat-up and battered than they are. (They even sit in the very same seats.) Retired, they've taken up residence in a shabby rest home known as the Raj Mahal that is, nonetheless, prime waterfront property, much in demand with young, well-heeled whippersnappers. As a hedge against being kicked out of their home, they stage a fake mob-style killing in the building's lobby. (Their victim is a corpse borrowed from the morgue where Brick works.) The murder seems a success at first, and it restores some of their old savoir faire; rejuvenated and emboldened, they put on snappy suits and make a dashing entrance at the local bingo parlor. But their "hit" launches a chain of events that ignites the anger of a Colombian drug lord (Miguel Sandoval, hilarious in the way he laments in heavily accented English that he's nothing more than a walking "clitchay") and gives a calculating bimbo stripper (played by the always delightful Jennifer Tilly) a chance to work her wicked wiles.

There's a bit too much going on in "The Crew." Its story is more convoluted than it needs to be, and some of the movie's more slender jokes bend awkwardly beneath its weight. There's also an extraneous subplot that has Bobby searching for his long-lost daughter. But Dinner, who made the sweet-spirited 1985 comedy "Heaven Help Us" and whose TV work includes "The Wonder Years," knows how to direct an ensemble so that each character emerges distinctly. And his lead actors rise to the occasion effortlessly, seemingly having a grand old time with Barry Fanaro's ("Kingpin") script. Their easy banter, along with a few howlingly funny lines from Lainie Kazan as stripper Tilly's stepmother ("Ballet since she was 6 years old so she can pirouette to show off her bubkes?" she marvels incredulously), keep the picture cruising.

Dreyfuss is more low-key than usual, and has a lovely moment when he slips out of the room to allow Mouth and his sweetheart some privacy as they slow-dance to the radio -- he takes a few seconds to twirl and fox-trot with an imaginary partner himself. Hedaya, whose portrayal of Richard Nixon in "Dick" was one of the great unsung pleasures of last year, gives Brick a rough but innocent charm. He's like a grade-schooler with a five o'clock shadow, chided by the others for religiously sending out Christmas cards to all of the group's old mob pals, though in the end his earnest endeavor pays off. And Reynolds, looking foxier in that salt-and-pepper beard than any retiree has a right to, lets his character's crotchety sex appeal rest just below the surface. His pissed-off scowl is the movie's cartoon comment about the anything-but-glamorous routine these guys' lives have come to. How would you feel if your social life consisted of joining a long line of silver-haired seniors for the free-soup dinner special at "Rascal House Restaurant," capped off by a night of girl-watching at "Nasty McKnickers"?

Directed with less intelligence and a clumsier touch, "The Crew" might have been just another too-cute comedy about cranky but ultimately lovable old codgers. As it is, though, it has just enough rough texture, and certainly enough cockeyed wit, to hang together as an amusing diversion. The interior of the Raj Mahal, all seedy, fake-Moroccan faded decadence, has seen better days, and so have many of the characters, who tend to do things like wear shorts with dress socks and polished shoes. There are lots of knobby knees in "The Crew," but there's also some nice ballroom dancing and a happy ending. You're never too young to enjoy the good things in life.