PETA on the spot 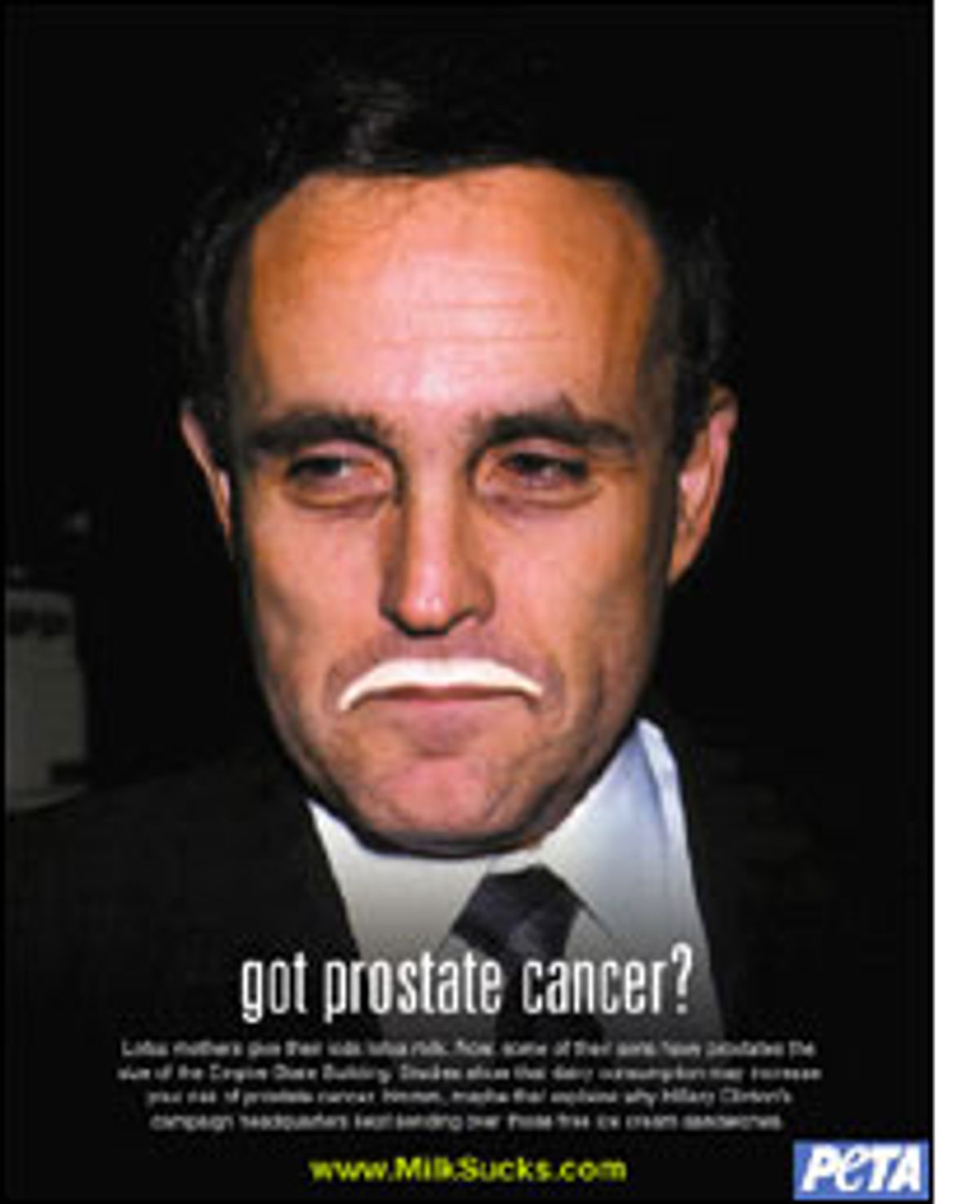 Months after his noisy departure from the New York Senate race, Rudy Giuliani became the subject of an attack ad. The group People for the Ethical Treatment of Animals is using the New York mayor's mug to sell its message that milk contributes to cancer; it has put up posters of a milk-mustached Giuliani that make a pointed reference to his prostate cancer diagnosis. Salon's political advertising panel says that this poster is far more sick than its subject.

I think it's terrible. Cancer isn't funny and you shouldn't exploit somebody else's problems to make your point, especially not someone who is very ill.

Vinny Warren, associate creative director with DDB/Chicago, is the advertising mind behind the "Whassup" ads for Budweiser.

It seems kind of exploitative and mean-spirited. I can think of a better way of making that point without impinging on Giuliani. To take a colder look at it, it's not a very effective ad. You question the recognizability of Giuliani outside of New York and the East Coast, and that could obscure the message. The reaction outside of the area isn't going to be about milk and cancer. It's more likely to be "Giuliani has cancer? Isn't he the mayor of New York or Boston? Didn't he run for president or something against Hillary?" I mean, it's not like it's just New York milk they're talking about. There must be a way to get the message across that has more impact and focus.

But they got some media play out of the ad, and if that's their intent, that's really cynical. That doesn't excuse hijacking his image. It makes you not really like these guys. It seems a bit too strident, too extreme -- especially for a group that professes to do good.

Gad Romann is the creative director of the Romann Group.

It's not good. It causes confusion because you don't know quite what context to put it in and what meaning you are supposed to get out of it. We don't know if we're supposed to laugh at it -- like the Farrelly Brothers' brand of humor in "There's Something About Mary." It's like cartoon humor, like PlayStation video games. People get killed, but you don't take it seriously. But when you transfer that kind of cartoon to real life, it results in confusion. In that case, you become a joker; no one will take your message seriously. And I think that the whole notion of using Giuliani, trading off the image of a fading mayor, isn't effective.

It's not as much shocking as it is for effect. We're living in a sort of post-shock culture.

Richard Blow is the former executive editor of George magazine, and is writing a book about John F. Kennedy Jr.

This ad is of the "all publicity's good publicity" school, but I think they're disproving that clichi because there's no one who could support PETA after this. They've managed to make Rudy Giuliani sympathetic. They're also alienating Hillary Clinton Democrats. But the worst thing of all is that it's not funny: They're making fun of someone with cancer. At least when they threw a dead raccoon on [Vogue editor] Anna Wintour's lunch plate, it was kind of funny.

As politics, it's a bad ad. As satire, it's a bad ad. And finally, what does this have to do with ethical treatment of animals? They might be trying to say it's unethical to milk cows. If that's the case, maybe we should just slaughter them all and make hamburgers. It's not sending a message that anyone is going to agree with or even listen to. No one's going to believe that what they say about milk and cancer is true. The imagery is so incredible, how can the text be credible?

Jonathan Foreman is a film critic for the New York Post.

This creepy ad represents an interesting departure for PETA, a new if not entirely successful cunning.

Aware that people find cows less cute and sympathetic than the supposedly cuddly animals used to make fur, they're pretending that their campaign against dairy consumption is about human health. It doesn't work: The ad reeks of the total indifference to human suffering that is characteristic of the misanthropes in the animal rights movement.

The very fact that PETA used Giuliani -- rather than a sweet-looking grandfather type -- as its poster boy for prostate cancer makes it instantly obvious that PETA is much, much more concerned about the "exploitation" of cows than about the alleged dangers of milk consumption.

If they did care at all about prostate cancer, PETA would hardly have exploited the image of the man they, like all New York progressives, see as an evil boogeyman.

You're actually supposed to chuckle darkly and then ponder the dangers of milk. But for all its tastelessness and disingenuousness, the advertisement does work. You do wonder -- even while you despise PETA for their single-issue extremism and scummy tactics -- if there really might be a link between milk and cancer, if this might be the beginning of a whole new tobaccolike health scare.

Of course, even if such a link were one day proved, many people might be willing to risk prostate cancer rather than give up cheese, ice cream and milk in their coffee.

It's controversial and effective. I think the ad is tasteless and extremely harsh, but they're getting their point across. Everybody's talking about the ad, and it's getting a lot of press. It's not like they care about their image or anything. They've been very aggressive in the past. They did the [anti-fur] ad with the models and all the blood. That was probably easier to stomach than picking on someone who's suffering like Giuliani is. Obviously it's very inflammatory, but they're probably accomplishing their goal.