Panama wants to stay out of the drug war

Fearful of walking in the footsteps of Thailand during the Vietnam War, officials in Panama want to stay out of the U.S. offensive in Colombia. 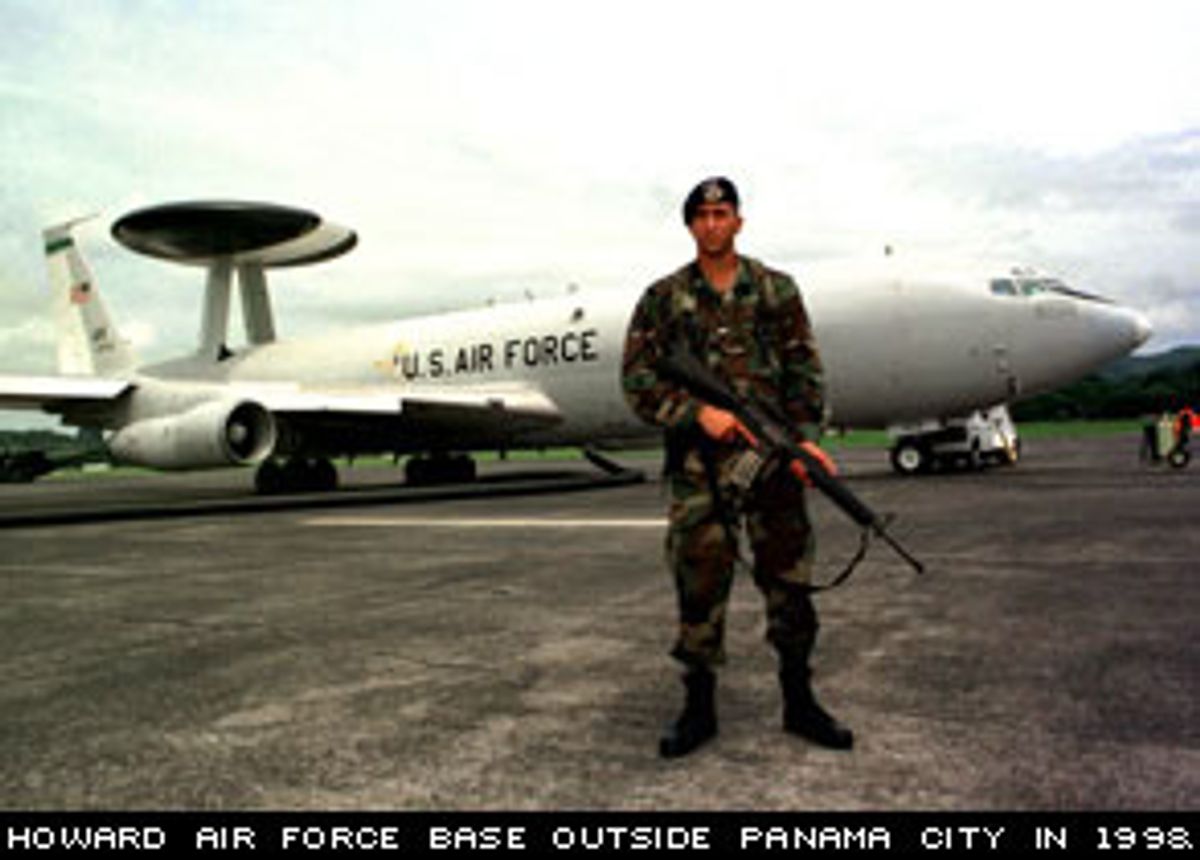 As President Clinton stands in Cartagena Wednesday to formally launch the United States' $1.3 billion anti-narcotics offensive in Colombia, top political figures in neighboring Panama appear to be taking a lesson from history.

"We do not want to become the next Thailand," says Marco Ameglio, chairman of the Foreign Relations Committee of Panama's National Assembly. Ameglio, like others in the Panamanian government, fears that the coming U.S.-funded offensive will drag his country into a war in much the same way that Thailand was dragged into the Vietnam War: as a staging area for U.S. troops and a destination for refugees.

The U.S. anti-narcotics offensive, known as Plan Colombia, will provide military training, helicopters and surveillance to the Colombian military as part of an effort to cut off the world's biggest source of illegal drugs into the U.S. While the U.S. insists the anti-drug push is not a military offensive, critics say the line between fighting drugs and fighting leftist guerrillas is dangerously blurred. Many critics also point to troubling human rights records on the part of the Colombian military, which will be receiving the bulk of the U.S. funds.

Only nine months ago, the last American troops left Panama as part of the final turnover of the Panama Canal. Now the State Department is demanding that Panama allow U.S. forces back in. Since mid-May, acting undersecretary of state for Western hemispheric affairs Peter Romero has been shuttling to this capital city to pressure the government to sign a visiting forces (Fuerza Visitante) agreement that would return U.S. troops to Howard Air Force Base, the former headquarters of the Army's Southern Command, as well as other now-vacant U.S. military installations.

Ameglio's fears about Panama's role in Plan Colombia are shared by practically the entire political spectrum in Panama -- including the major opposition parties and the president, Mireya Moscoso. She has thus far resisted pressure to sign an agreement that would permit U.S. troops to use the country as a support zone for its operations in Colombia.

Official State Department policy is not to speak about the specific provisions of the Fuerza Visitante proposal. Public statements thus far are limited to invitations to join in the war on drugs. Earlier this month, the U.S. Embassy in Panama issued a statement explaining that the agreement would involve "joint anti-drug maneuvers and training, a program that would assist the security of the United States, and the enforcement of international conventions [against narcotics]." U.S. Ambassador Simon Ferro has expressed impatience and incredulity with the Panamamians' resistance. He says the agreement would only "benefit" Panama by "improving their capacity for joint [anti-narcotics] exercises."

Panamanian officials familiar with the negotiations discussed some of the details of the U.S. proposal with Salon News. They say the country would become a staging and rest area for troops rotating into Colombia to train and assist the Colombian military and national police. Military airstrips in Panama would be used for anti-narcotics surveillance flights, and training would be provided to the Panamanian police (the country has no standing army).

Most controversially, the proposed agreement sets no limits on the number of troops to be stationed here; and demands that U.S. forces be subject not to Panamanian legal jurisdiction, but to U.S. military law. That proviso hits a raw nerve in a country which only 11 years ago was invaded by U.S. troops. Panama has a long history of what Carlos Lopez Guevara, a former ambassador to the U.S. who helped negotiate the Panama Canal treaty, calls a "regimen de capitulation" with the United States. (The country's declaration of independence in 1903 was provoked partly by Theodore Roosevelt's desire to dig the canal through what was then a province of Colombia. The country's first ambassador to the U.S. was a Frenchman who negotiated the sale to the U.S. of the French Panama Canal Company).

The Fuerza Visitante comes at a delicate moment, when obtaining control over the canal has spurred a process of redefining Panama's national identity. "For Panamanians, it's a whole new story," says Ameglio. "Starting January first this year, we are rewriting our story as a nation. Now the U.S. wants permission for an unlimited amount of military forces to come here at anytime with diplomatic status. The Plan Colombia, that's almost a declaration of war against the guerillas, or the narco-traffickers. I don't think their plan will be successful. But it will affect our country."

Though it barely warranted notice in the U.S. press, in Panama the battle over the Fuerza Visitante has been front-page news for weeks -- hitting at a time of resurgent nationalism and concern over being dragged into a conflict not of their own making.

"They are following the same steps that McNamara and others made during Vietnam," comments Miguel Antonio Bernal, a former advisor to Foreign Affairs Minister Jose Miguel Aleman, now a political analyst and law professor at the University of Panama. "Trainers, technical support. Soon, we will be suffering from a war we have nothing to do with ... There is a saying, 'When the elephants struggle, it is the grass who suffers.' We are the grass in this case."

Panama is one of several countries in the region to express concern that Plan Colombia blurs the line between the drug war and the Colombian civil war. Costa Rica refused U.S. entreaties for troop placements and support facilities.

In the meantime, Plan Colombia support forces are spreading across the region. Today surveillance operations once headquartered at Howard Air Force Base have been distributed to what the State Department calls forward operating locations (FOLs). The FOLs are serving as radar stations and launch pads for surveillance planes headed for and around Colombia and coordinated from Miami, according to an official with the State Department. Between 10 and 20 ground support personnel are stationed at each locale, and those numbers are slated to increase as Plan Colombia shifts into high gear. FOLs exist in the Dutch Caribbean islands of Aruba and Curacao, on a base along Ecuador's eastern frontier and in El Salvador. Once again U.S. military flights are taking off from San Salvador's Comalapa international airport -- as they once did during El Salvador's civil war.

The U.S. military's return to El Salvador eight years after that country's hard-fought peace agreement was hardly welcomed with open arms. The peace agreement had led to the withdrawal of U.S. trainers and military advisors who once supported that country's right-wing government in its civil war with guerillas. The new pact to cooperate with U.S. surveillance was passed by the country's legislature in July after three months of heated debate, and only after the conservative majority parties declared it an agreement, and not a treaty. That evaded the need for a two-thirds vote, which would have been blocked by the minority party of former guerillas-turned-parliamentarians, the Farabundo Marti National Liberation Front. That party has challenged the vote in the country's Supreme Court.

"One of the great ironies [of Plan Colombia] is that a major justification of U.S. policies has been how the drug trade is destabilizing the region," asserts Winnifred Tate, a senior fellow at the Washington Office on Latin America, which has been opposing Plan Colombia on the grounds that it could lead to an increase in human rights violations. "The irony is that this infusion of military strength will contribute to the destabilization and erosion of democracy in countries where we're supposed to be strengthening newly democratic and civilian governments."

Back in Panama, negotiations over the return of U.S. forces are intensifying as President Moscoso faces increasing pressure to sign the Fuerza Visitante agreement. Panama is undergoing a budding economic crisis -- provoked partly by the earlier U.S. withdrawal from the canal -- and the importance of the State Department's goodwill, on outstanding aid requests to international financial institutions, cannot be underestimated.

Reportedly, one of the issues on the negotiating table is the cleanup of U.S. bases left behind when the last troops departed in December: About 10,000 acres of land around the Canal and Panama City were left with tons of live munitions and toxic waste -- a violation, Panama asserts, of provisions of the 1977 Canal Treaty. But signing an agreement to bring the troops back may be the only way to ensure that the waste from their previous stay is removed.

In Washington, the State Department is countering the Vietnam analogies presented by critics of Plan Colombia by offering a page on their Web site. "Why Colombia Is Not the Next Vietnam" presents seven points enunciating the differences between present-day Colombia and 1960s-era Vietnam: "Colombia has not asked for U.S. troops," it reads; "U.S. military assistance will be minimal, monitored and transparent"; "The people of Colombia are determined to counter the menace posed by narcotraffickers and their guerilla protectors."

But events in Panama already suggest that references to Vietnam-era Thailand are not simply rhetorical flourishes. Over the last 18 months, the flow of refugees into Panama's Darien Jungle border with Colombia have dramatically increased, according to estimates from government and the United Nations High Commission on Refugees. Temporary refugee camps providing shelter to some 300 to 800 Colombians have already been established in the Darien interior. Most of those refugees are farmers rousted from their land by the violence. Higher income Colombians are moving direct to Panama City (along with thousands more moving to Miami, New York and other U.S. cities), keeping real-estate agents busy in the towering apartment blocks overlooking the Pacific.

The UNHCR estimates that there are 1.2 million internally displaced people in Colombia today, half of those made homeless in the last year alone. The numbers promise to skyrocket exponentially as fighting across the border intensifies. Panama's national police recently announced plans to upgrade its fleet of helicopters and double the number of units along the Darien frontier to deal with the expected flood of refugees.

On August 24, Panama's minister of justice, Winston Spadafora, reaffirmed his unease with the Plan Colombia, claiming that it will obligate the country to expend additional funds for its own security. "Even though we are in no condition to say whether the plan should be fulfilled, I believe it would be better that it does not happen in this way," Spadofora told Panama's leading newspaper, La Prensa.

While it considers whether to sign the Fuerza Visitante agreement, Panama is demanding $30 million from the U.S. to assist its security forces, to protect itself from incursions by Colombian guerillas, drug traffickers and coca growers on the run from the fighting. If Panamanian officials do find themselves opening the door once again to U.S. troops, they want to get something out of the deal.