A graffiti incident in Chico, Calif., confirms our worst fears about rural America. Or was it just some kid's prank? 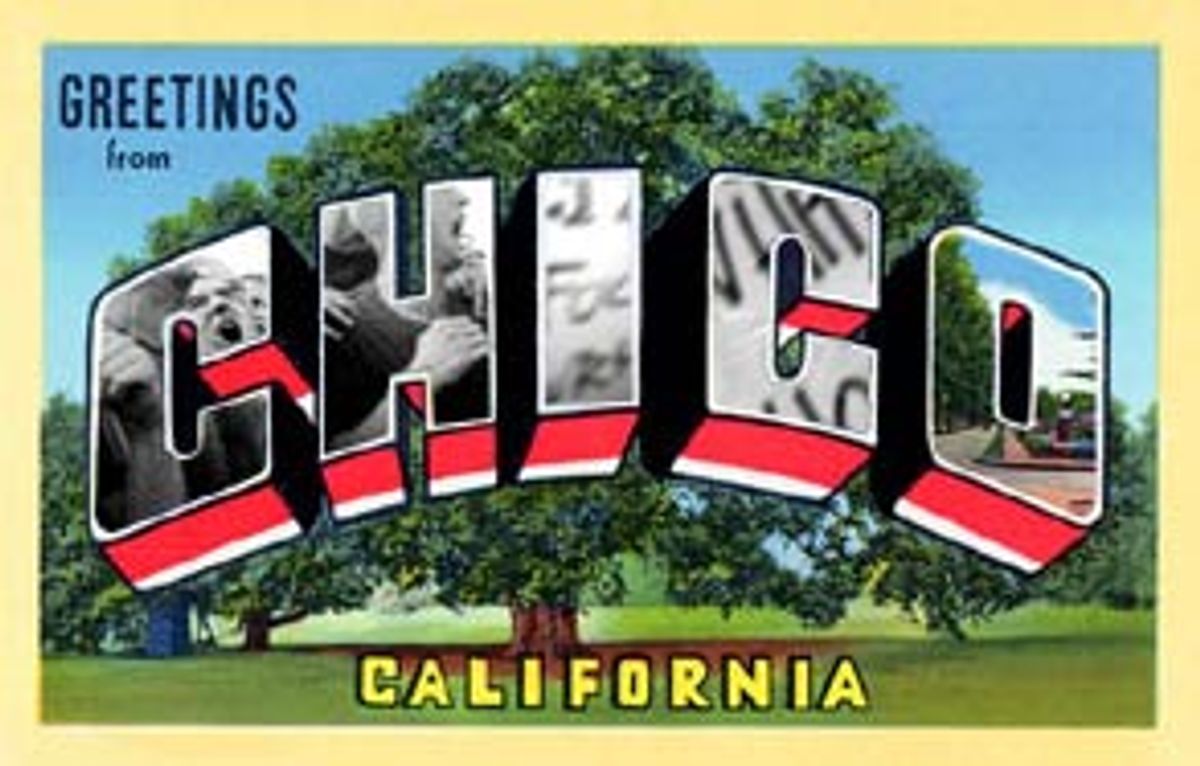 North of Sacramento, Highway 99 shoots through a series of small towns, some marked only by a gas station or a roadside fruit stand. Billboards advertise new homes as "a piece of the American Dream" for $88,000, amid miles of plum and almond trees.

Chico proves something of an oasis from the rural expanse, a SimCity version of a college town, home to Chico State University, plopped down in the middle of agricultural California. There are coffee bars and Internet cafes, boutique clothing stores and tattoo parlors peopled by residents wearing hemp necklaces, Birkenstocks, fraternity shirts and nose rings. It's the only part of Butte County where Democrats outnumber Republicans.

It seems an unlikely place to become notorious for spouting the anti-Semitic thoughts of Middle America -- the sentiments pundits thought might be festering in the nation's extreme outposts after Al Gore named Sen. Joseph Lieberman, who is Jewish, as his running mate.

Gore's pick caused many American Jews to simultaneously cheer and fear what would come next. Then, on Aug. 23, seemingly on cue, someone entered the Chico offices of the local Democratic Party (a volunteer had failed to lock the door) and scribbled "No Jew in the White House" across a dry-erase board. The event made headlines from here to Jerusalem.

But after I walked into that barren office, nestled next to an old abandoned movie theater at the end of Main Street, and saw the graffiti on the dry-erase board, the words still untouched, the incident didn't exactly seem worthy of national attention. I'm Jewish, and yet my initial reaction to the nearly illegible scrawl in green marker was to scratch my head and wonder where the controversy was.

But it turns out the incident was not an isolated one. Last weekend, after the graffiti had already been publicized, messages reading "Kill the Jew" were found written around town, on a park bench and at a local laundromat, according to local authorities. The Chico police do not believe the markings are related, but they have captured the attention (and, perhaps, the imagination) of local Democrats.

"It's showing up all over the city," says Bob Ray, the Democratic Party's local field director. Ray is 32, a student at Chico State with a surfer-friendly, Jeff Spicoli air about him. He responds to questions about the incidents with enthusiastic disdain. "It would be my guess that it's a small group of Neanderthals that for some reason got focused on this."

But couldn't the graffiti also be the work of some dumb kid, whose desire for notoriety gets fanned every time the media covers one of his stunts? Jonathan Bernstein, director of the Northern California chapter of the Anti-Defamation League, says the incident should be taken seriously. "Generally there's a tendency to shrug these things off as a youthful prank, but there's a real danger in that," he said. "Youth are responsible for a large portion of horrific hate crime in this country. Neo-Nazi skinheads are made up of youth, and they're responsible for 50 murders in the last eight or nine years, as well as thousands of stabbings and desecrations. So we don't want to easily just dismiss it as a prank."

Ben Wirtschafter, a Democratic candidate for the state Assembly who is Jewish, says he has been dismissed out of hand by some voters simply because of his faith, including just a few weeks earlier, at a local fair. "I was handing out literature. They wanted to know whether I believed in Christ. When I indicated that I didn't, they returned the literature and said they weren't interested in me."

Wirtschafter said he has seen more menacing signs of prejudice around the county. "Traveling around Marysville I do see some swastikas. I've also seen signs for SWP, which is the Aryan Nations gang," he says.

It's an area that, in the past decade, has been mired in the economic doldrums, even as the engine of the nation's economic boom whirs along just a couple of hundred miles to the south in Silicon Valley. Butte County's unemployment rate of 8.5 percent is still roughly twice the national average. An area with a struggling economy is often a haven for hate groups, according to Bernstein. He says groups like the National Alliance and the World Church of the Creator have been active in the area in the past. And earlier this year, brothers Matthew and Tyler Williams from nearby Red Bluff were arrested on suspicion of setting fire to three synagogues in Sacramento after allegedly murdering a gay couple in Redding, 70 miles north of Chico.

Bernstein says the synagogues that were torched in Sacramento were first targeted with anti-Semitic leaflets. Though it is uncertain whether the leaflets and the torchings were related, Bernstein says the incidents are a reason law enforcement should take even idle threats seriously. "Sometimes things like leafleting or graffiti are not really dealt with by law enforcement. They figure there's no blood, no severe damage, so it's not a major incident. The events of last summer remind people these things need to be taken seriously."

And in this case, the police took the incident far more seriously only after the media -- with prodding from the Democratic Party -- did. Initially, party field director Ray says, the police took a simple incident report and didn't dust for prints. That prompted another local Democrat, a retired professor from Chico State named Roberts Braden, to phone members of the media to let them know what had happened.

Afterward, according to Ray, he discussed the incident with Aleza Goldsmith, a reporter from the San Francisco Jewish Bulletin. "She was like, 'What are they doing? What are they doing?' I told her, 'Look, they came in, one officer, they looked around, asked some questions about how they got in.'"

Then, Ray says, he said to Goldsmith: "What you ought to do is give [the police officer] a call and ask him why he's not doing anything." The result? "About 20 minutes later, two police cars showed up with fingerprint kits."

Ray says he later talked with Goldsmith again, "and we kind of laughed about it." Shortly after that, the Associated Press picked up the story and the news went global.

But now, not much of an investigation is underway, according to police. The FBI is monitoring the case, and a Secret Service agent was in town Wednesday to ask questions, but according to Sgt. Ford Porter of the Chico Police Department, "It's difficult to do any kind of follow-up without any more information, unless we get some leads from somebody or catch somebody in the act."

Porter says he's more concerned about the media attention giving more people big ideas. "The biggest concern is that [what] people who typically write graffiti are looking for is attention -- and that is exactly what they're getting, a lot of attention," he says. "That's the sad thing."

That's not stopping Ray, who hopes the Democratic Party will use the graffiti incident as a rallying point for the Democratic fall campaigns. He envisions turning this into a cause, or movement, of sorts. While he has not had contact with the Jewish students group on campus or the local synagogue, "We plan on having several different protests on racism and bigotry on this campus," he says. "I hope this brings the politicians to Chico so people can see what we are about."

Plans to use the incident as a political weapon prompted a local conservative radio shock jock to suggest the Democrats penned the graffiti themselves. That, Ray says, really peeved him. "It just shows you the kind of people we have to deal with up here."

Still, Ray was coy about just what he has planned for the fall. "We're going to do a big event on campus that ought to get national coverage, hopefully."