I was a lawyer in one state, a mom without portfolio in another. 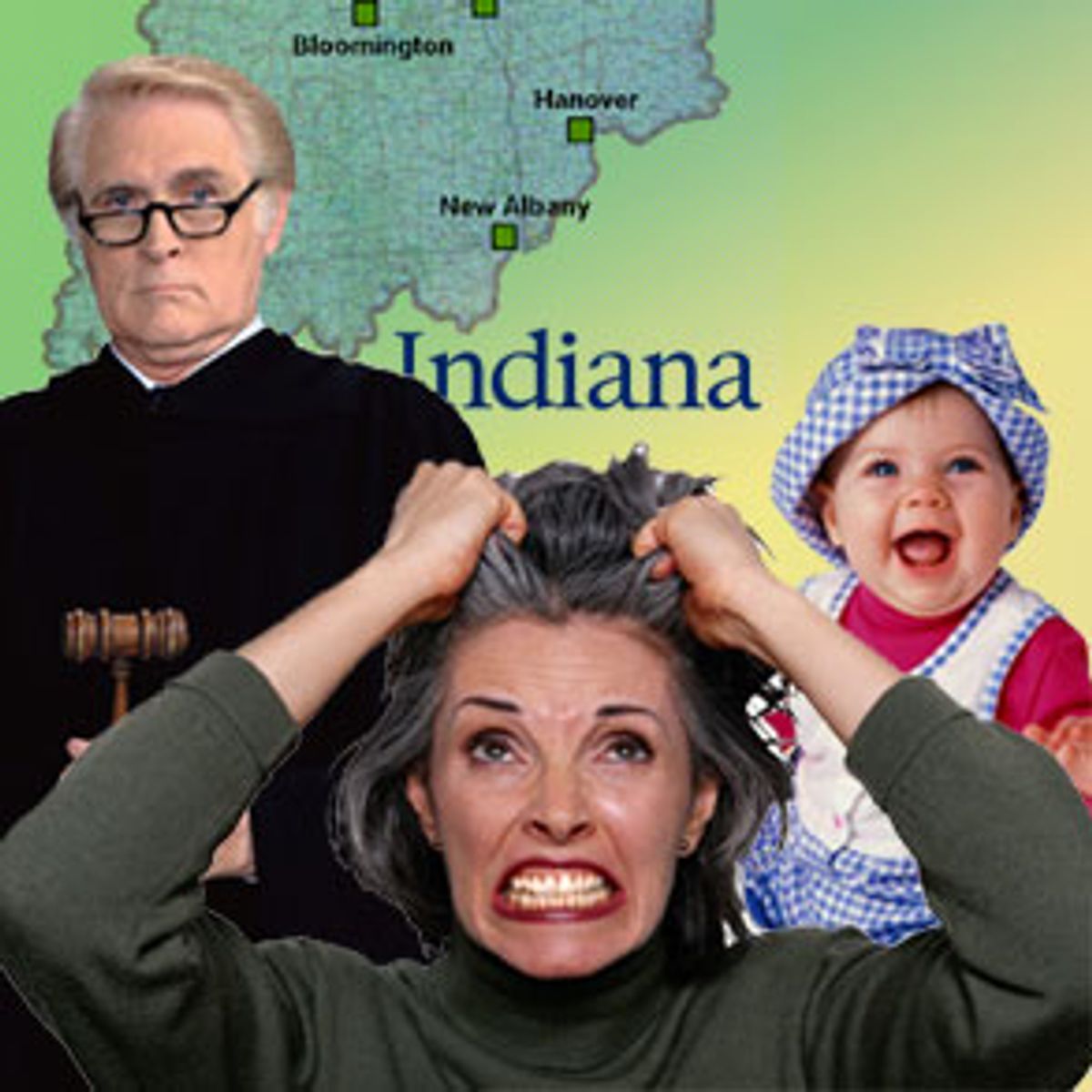 When I left Pennsylvania, I was a practicing attorney, published author and recognized expert in domestic violence law who happened to be married with a small child. After I crossed the Indiana state line, I was just a mom.

The Indiana Supreme Court, like courts in many states, has a rule that governs whether out-of-state lawyers can become members of the state bar without first taking the state bar examination. Out-of-state lawyers who practice law in full-time, salaried, traditional jobs are welcome. Those who choose alternative jobs while their children are young are not.

I gladly eschewed the prevailing 60-hour workweek that is common at law firms when I had a child in 1993. I was committed to doing everything possible to give my baby a good start in life, and I wanted to enjoy the relatively short period in my child's life before he went to school.

So I was feeling extremely confident professionally when I got to America's heartland. In discussions with an Indianapolis law school, it was agreed that I would take steps to begin its first domestic violence law clinic. I felt I had many important contributions to make here. Then I discovered that my legal experience was essentially worthless in the eyes of the Indiana Supreme Court.

It seems that my experience for five of the past seven years failed to meet the court's definition of "actively engaged in the practice of law." The court's rule essentially requires employment on a full-time basis and is heavily biased toward corporate law practice. No one like me had ever been granted admission to Indiana's bar under the rule and I was not to be an exception.

I was shocked, livid. A committee appointed by the court had denied my application to waive into the bar. I appealed to the court, which rejected my appeal, and then confirmed its rejection. After years of representing women who were victims, I now felt like a victim. From my perspective, the Indiana Supreme Court had made an absurd, discriminatory rule and then decided it was fair.

But isn't it obvious to everyone that a rule that requires full-time work disproportionately affects women with young children? I fired off a letter to the leader of the Indiana women's bar to alert her to this outrage, only to discover that she was a member of the initial committee that denied my application. Needless to say, the Indiana women's bar wasn't outraged. I filed a complaint with the Indiana Civil Rights Commission, which ruled in February that it lacked jurisdiction.

When I looked outside the state, I found little support. Letters to national women's and bar groups went unanswered. For the first time since the 1970s, I began to wonder whether the women's movement had stopped moving, having stalled in its tracks sometime in the 1980s. I began to notice that there are a lot more critics of feminists than actual feminists.

Statistics show that women today still earn 25 percent less than men and only about 40 percent of women have pensions. There is agreement that at least some of this disparity is due to the continuing presence and the persistent effect of discrimination against women. What about the rest of it? Critics of equal employment measures blame women. They say that women choose to work intermittently or seek lower-paying "female" occupations to accommodate child-rearing demands.

The fallacy of this argument is quickly apparent in my case. The Indiana Supreme Court ostensibly adopted the rule governing admission of out-of-state lawyers to protect state residents from malpractice by lawyers who don't know the specific laws of the state. (Apparently, I know more about domestic violence law than most state practitioners. I was invited to address an advanced family law class on the topic at Indiana University Law School.)

In reality, the rule serves primarily to protect large Indiana law firms from out-of-state competition. But regardless of the rule, lawyers who make mistakes are sued in court, just like doctors and dentists.

I dropped out of the traditional labor market, but I never stopped working. I worked as hard, if not harder, than my husband, whose salary and pension never suffered. Indeed, his career is flourishing. I didn't choose to be paid less. I chose a job that allowed me to make child rearing a priority. The lousy pay was an unwanted byproduct of this choice and, more than anything, reflects our nation's failure to adopt sensible child-care policies.

Even if the critics are right and the wage gap is attributable in some measure to women's childbearing role, I still wonder why this is a sufficient reason to penalize women for the rest of their lives. Fathers and employers also benefit when mothers (voluntarily or not) accept the primary responsibility for raising young children. The benefit to a father is obvious and incalculable. The benefit to the working spouse's employer is less obvious but it is calculable. It may include reduced absenteeism and savings in healthcare and child-care subsidies and related costs. Ultimately, all of society benefits when a family raises a happy and well-adjusted child. Yet, mothers alone are penalized.

I have learned firsthand that there is precious little sympathy (let alone support) for moms who choose alternatives to full-time employment. It's not hard to see why. Many professional women were forced to make tremendous sacrifices to have children or made the ultimate sacrifice and remained childless. Female lawyers are routinely bumped from partner track to "mommy track" when they have children. Taking the bar may seem to them to be a small price to pay.

There seems to be an underlying feeling that grueling, stressful schedules, missed soccer games and parental guilt are a rite of passage to success in the legal profession. Many male lawyers are loath even to take family leave for fear of hurting their careers. At the other end of the spectrum are women who don't have the luxury of taking any time off when they have a child, except the minimal six to eight weeks of family leave offered by most employers.

It has been more than a year and people ask me why I don't just take the bar exam. Meanwhile, the only woman on Indiana's five-member Supreme Court resigned and a male was appointed by the governor to take her place, making the state's highest court all male. The domestic violence clinic proposal fell through because I could not supervise students without first being licensed to practice in Indiana.

Now that my child is entering first grade, I am looking for a more traditional job. I regret losing the opportunity to work in an area of the law for which I have both expertise and interest. I have had to rethink my professional identity. Am I still a lawyer?

I completed a reference book that was published last fall on the American court system and I am working on another. But what's next? I passed the Pennsylvania bar on the first try immediately after I graduated from law school about eight years ago. I know I can do it again, but I don't have any will to prepare for and take an expensive and time-consuming test that serves only to validate discrimination by Indiana's highest court.

Until the 1970s, courts ignored domestic violence, then as now a leading cause of death and injury to millions of women each year. This changed when courageous victims filed lawsuits against police departments that refused to protect them, winning millions of dollars in damages. More than anything else, taking the Indiana bar exam seems cowardly.

Patricia G. Barnes is lawyer in Indianapolis.She is the author of Congressional Quarterly's Desk Reference on American Courts (Washington, D.C.: CQ Press, 2000) and is currently completing a general reference book on the criminal justice system.