"Do What Thou Wilt: A Life of Aleister Crowley"

A biography of the spooky, sex- and drug-addled egomaniac who became an icon to generations of wannabe occultists. 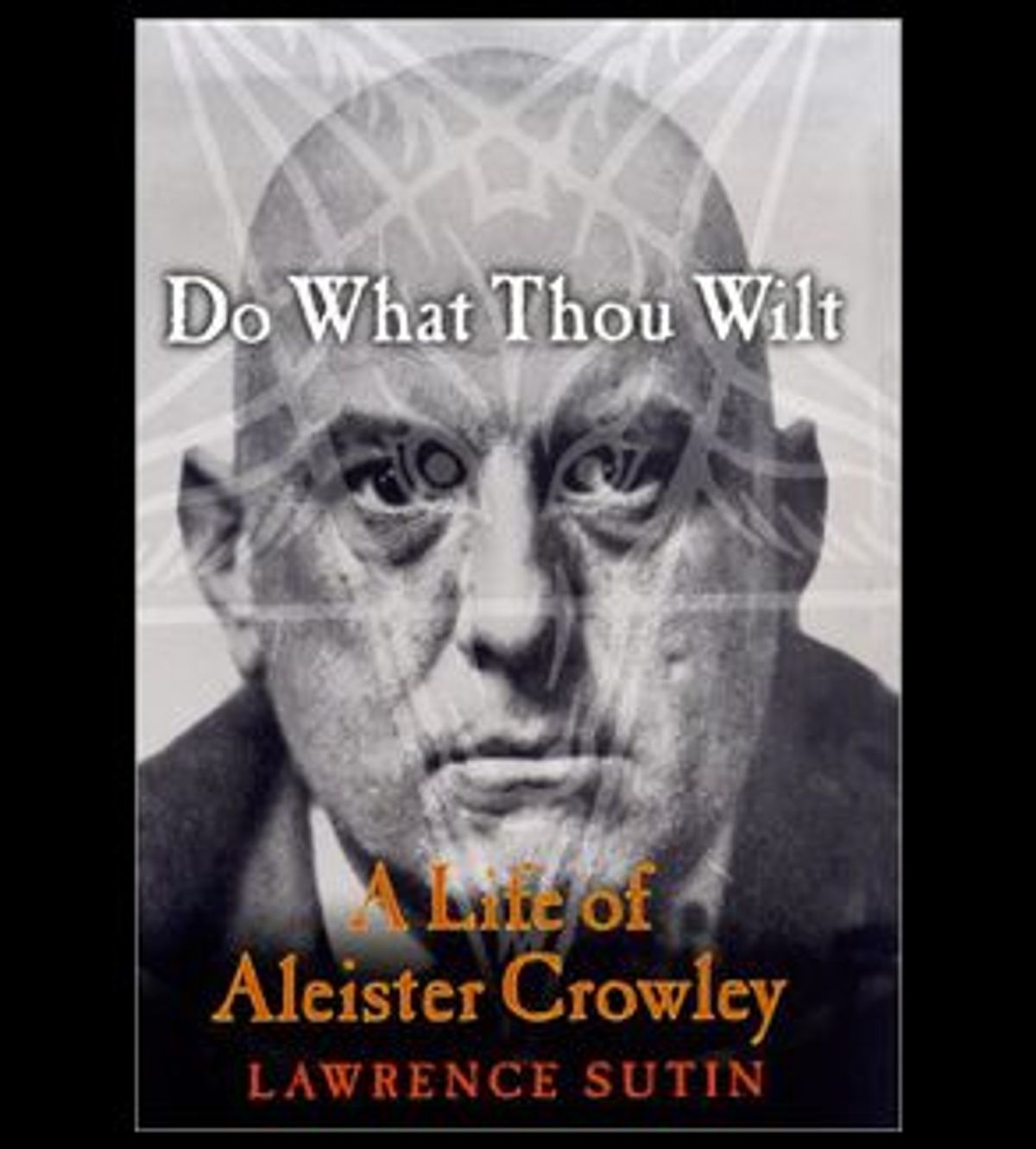 Nonfiction
Do What Thou Wilt: A Life of Aleister Crowley
by Lawrence Sutin
St. Martin's Press, 496 pages

Among the most basic human urges is the hankering to believe in a supernatural order that will clear up -- or justify -- our bafflement at the cosmos. A sane adult, of course, doesn't generally require that he or she be a central figure in that supernatural order. Which is to say that most people, thankfully, do not grow up to be Aleister Crowley.

Creepy Crowley is the grand old man of 20th century pop occultism. That's his glum bald head on the cover of the Beatles' "Sgt. Pepper's Lonely Hearts Club Band" (top row, second from left); it was his Scottish manor that Jimmy Page bought during the heyday of Led Zeppelin's obsession with magic and mysticism; shelves of his works can be found in those stinky occult bookstores where a certain species of moody adolescent shops for tarot cards, candles and witchy jewelry. Lawrence Sutin's "Do What Thou Wilt: A Life of Aleister Crowley" explains the dubious accomplishments -- as poet, novelist, essayist and, um, magus -- that have made this sexually and pharmaceutically voracious English spiritualist a fuzzy icon to generations of wannabe occultists.

Crowley was born in 1875, his father a preacher in an obscure Protestant sect and the heir to a small brewery fortune. He was educated at religious academies and at Cambridge, and in 1898 joined the Hermetic Order of the Golden Dawn, the mystical society whose most prominent member was William Butler Yeats. Two years later Crowley was expelled from the Golden Dawn after he tried to take it over. He published many volumes of bad poetry, lived lavishly, studied yoga in Ceylon, climbed Himalayan mountains and tried to formulate a new spiritual program -- mostly, Sutin indicates, so that he would have no bureaucratic superiors to deny his claim to be the Beast prophesied in the Book of Revelations.

On a visit to Egypt in 1904, the Beast produced "The Book of the Law," a short text purportedly dictated to him by an emissary of some ancient god or other, which sets out the new creed of "Thelema" -- a mix of Egyptian, Masonic, cabalistic, Rosicrucian and Golden Dawn symbology on a bed of yoga with the catchy tag line "Do what thou wilt shall be the whole of the law." (Not quite; Crowley wrote endlessly about the rules of Thelema.) Followers of Thelema would become conversant with higher planes of existence through "immersion in Chaos itself," as Sutin nicely boils it down. In practice this meant vaguely delineated rituals involving lots of drugs and sex; in Crowley's case with both men and women. Contrary to such public image as he has, he was neither Satan nor a Satanist; he saw good and evil as conceptual obstacles to the discovery of one's true will.

Though he proselytized constantly, went broke self-publishing dozens of books and founded a short-lived Thelemic abbey in Sicily, the Beast never managed to retain more than a handful of disciples at any one time. Sutin itemizes his futile attempts to persuade parties as diverse as the British government, Adolf Hitler and Henry Ford to adopt Thelema and his history of derision in the English and American yellow press, which billed him as "The Wickedest Man in the World." Despite Sutin's sympathetic intentions, Crowley emerges here as an egomaniacal blowhard who used his role as the prophet of the New Aeon as an excuse to treat women horribly, get buggered as often as possible and become a heroin addict, which he remained for decades until his death in 1947.

Sutin leaves no doubt that Crowley believed wholeheartedly in Thelema, but his efforts to make sense of the Beast's drug-addled rantings are in vain. And largely missing here is the context of more popular spiritual movements of Crowley's time, like theosophy and the burgeoning Western passion for Zen, Hinduism and other Eastern philosophies. Why should we care about a confusing cult promulgated poorly by a weirdo who lacked for sane disciples? Because unlike Krishnamurti, say, Crowley stalked around in black cloaks, looked spooky and claimed he could make himself invisible at will, which means he's still a great poster boy for everybody who'd rather embrace cool-sounding mystifications and the promise of "Magick" than submit to more rigorous or metaphysically plausible spiritual disciplines.

Sutin's earnest, clunky, overlong biography portrays a spoiled fourth-rate poet who not only didn't get over that adolescent yearning for new spiritual kicks, but insisted until the impoverished end on his own spiritual supremacy over all other men -- a regular fascist of the soul.