What my parents wanted was a mammy

They got Jamine, who worked for us until we didn't need her anymore. 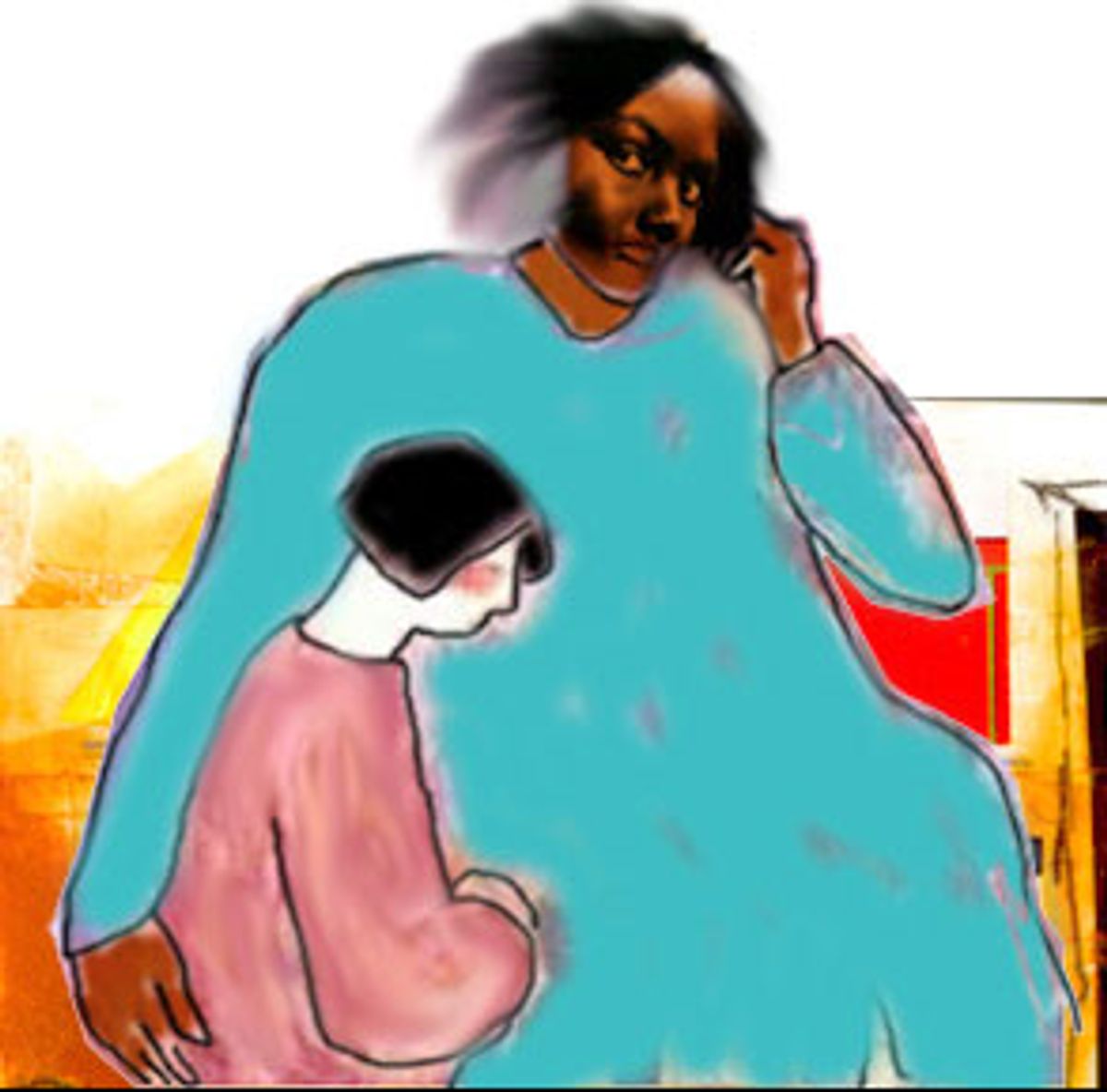 My parents say Jamine was hired because during the interview she asked to hold me and I fell asleep right in her arms. She asked the right questions, not "How much is the pay?" but, rather, "How premature was she?" She wore, as she still does 18 years later, a nurse's uniform of blue scrubs and a white jacket, inspiring confidence in two frazzled first-time parents.

But there are other reasons. She took care of an ailing mother -- proof that she was nurturing -- but had no children of her own. Hiring a mother of young children would have felt too cruel, but also awkward. Who would care for me when those children became sick? Would I be expected to befriend them? Wouldn't she come to resent caring for me?

My parents wanted a woman who could be part of our family without the baggage of her own. What they wanted was a mammy. Jamine's skin was dark black, her body obese. She would never be mistaken for my mother. She would never seduce my father.

My family's lore was a simple one that to my child self was epic. At 18, my father's father had bribed a gentile farmer to hide him in a wheelbarrow and smuggle him across a Russian border. Settling in Minnesota, he had worked in a box factory by day and studied by night. At 40, he graduated from medical school. When he died, the year I was born, he became half-man, half-myth.

In third grade I wrote a composition that compared my grandfather to Benjamin Franklin -- the greatest hero a Philadelphia school child can know -- by setting the story of the apprentice who set print type by day and read Aristotle by night against his. Despite odds and great prejudice we had succeeded in this hostile country. But we are Jews. We have suffered. And because of our suffering we are incapable of prejudice.

Jamine's grandparents had been sharecroppers. Her father had supported four children as a self-taught electrician. His death in 1972, the year Jamine graduated from high school and only weeks before he turned 65, left his widow without a pension and Jamine without hopes of going to college. She had wanted to be a doctor.

She began working as a custodian for Jefferson Hospital, the hospital where I was born. The work was dull, but she liked the atmosphere of the hospital, the doctors and nurses running about. She was promoted to nurse's aide and began a two-year evening course of study at the Franklin School to earn a certificate that would allow her to be a pediatric medical technician. She worked by day and studied by night.

But after her first year the program lost its accreditation. The school filed for bankruptcy and did not refund Jamine's tuition. It had been a diploma mill, one of the hundreds of institutions born of student loan programs. She was now in debt for more than $2,000, more money than she could hope to save. Her mother's arthritis became crippling and significant amounts of Jamine's paychecks were needed to cover what Medicaid didn't.

Jamine quit her job at the hospital when she found a slightly better paying position as the nanny for newborn twins. She didn't feel the desire to work in a hospital anymore. She was nursing her mother now.

This is not a story Jamine told me. I found it out by looking through my mother's papers, the series of letters she wrote to the Pennsylvania Higher Education Assistance Agency when it sued Jamine in 1985 for the money she owed. My mother made a settlement offer, $500 to be paid in $20 monthly installments, telling the company, "I have explained to Miss Johnson that, in addition to other defenses I could raise on her behalf (such as the statute of limitations, equitable estoppel and fraud by the school), she is eligible for protection by the bankruptcy courts."

But it was a blank threat, my mother says. Although filing for bankruptcy was the most logical way to shield Jamine from creditors, Jamine wouldn't do it. Just as her mother, whose illness made her suffer terribly in winter, wouldn't accept welfare to pay her staggering heating bill, Jamine would not accept this protection. She would fight the agency because it was wrong, but she wouldn't hide by labeling herself bankrupt. It is this quiet dignity that has always impressed my family. We like to believe we would do the same if our situations were reversed.

I ask my mother what happened. After trading voice mails all day ("This is Ellen Friedell calling. I mean, it's Mom!"), I catch her at her desk. She calls Jamine's her most successful case ever. The agency sent them a letter several months later, not a countersettlement, but a form letter thanking Jamine for paying her account. The lawsuit wasn't pursued and Jamine never received another bill. Hooray for screwed-up bureaucrats!

But Jamine didn't go back to school. The whole process had left her bitter and resigned. Education wasn't really for people like her. So she worked for us for 13 years, until we didn't need her anymore.

Despite the story of my infant self falling asleep in a stranger's arms, I did not become a trusting, complacent child. I knew Jamine loved David more. Born two years later with jaundiced skin that became very dark until he was 7, David could pass for her own. One of Jamine's favorite stories is of pushing David in his carriage with my father when an old woman walked past. She looked at Jamine and she looked at my father and the light-brown baby and then she gasped. My father put his arm around Jamine, beaming, the proud husband. "The look on her face," Jamine said, "just the look on her face," and we all laughed.

From the beginning David adored her completely. While David and Jamine would cuddle under afghans to spend afternoons watching "Diff'rent Strokes" and "Cosby" and "Good Times," I would impersonate my father: "Those shows are trash!" But I would hide behind a chair and watch the shows anyway.

With the intensity remaining from Sunday's sermon, Jamine would sometimes tell us Bible stories. We knew it was forbidden, and thus exotic. David and I adored hearing of Judas' betrayal, the Resurrection. We would impersonate Jesus on the cross, our mouths open and tongues sticking out, asking softly, "Water please." But we were always quick to tell Jamine, in the line taught to every Jewish child before the age of 6, "The Jews didn't kill Jesus! The Romans did."

David and I played primarily with the children who lived on our block. All were members of our synagogue. All had black babysitters. The women would combine us for play dates while they sat and talked. When I was 8, I overheard another babysitter grumble about her employers to Jamine, how they were asking her to do more cleaning than they had said, came in later than agreed. They wouldn't let her keep a key to the house, instead forcing her to give it back ceremonially at the end of each day. Every morning she had to ring the bell until one of the kids let her in. Often, if they were "in the middle of something," they wouldn't answer the door for a while. Sometimes, when I would roller skate early in the morning, Jean would be on their front step, waving to me each time I came around the block.

Jamine would pick me up from elementary school and we would walk the two blocks home together. It was important to my mother that I was not like my classmates, who wore their house keys on strings around their necks. But as soon as I got home I would ignore Jamine by going to my room, closing the door and reading from the Sweet Valley Twins series. I resented the breaks when Jamine would drive me to ballet class and to Hebrew school.

Like many lonely girls, I was obsessed with twins. I wanted a friend who looked just like me, always available for playing board games and drawing and making collages out of Newsweek photographs. We would invent our own secret language and confuse teachers on April Fools' Day. I asked Jamine about twins once, and she told me her twin sister had died during their birth.

Pictures David drew in kindergarten, labeled in a teacher's handwriting "Family Portrait," contain a short, round ball labeled "Jam." But he has never gone to visit her since she stopped working for us. Jamine would call once a month on a Saturday morning to talk to David, would stop by unexpectedly because she was "in the neighborhood" every few weeks. But David was usually away -- with friends, at chess tournaments, playing baseball -- and so we would talk.

I would fumble, but knew I could ask: "How's Grandma?" And she would say, "Not so good, not so good," and I would murmur sympathetically as Jamine talked to me about her mother's surgeries, the new medication they had her on that seemed to work but made her sick. These were things she wouldn't tell David when they talked. She would ask me how school was and I would say, "Fine. I'm working hard, Jamine." Boyfriends? "No." And then I would excuse myself to go do homework.

I haven't spoken to Jamine since I left for college a year ago. It's not as though I don't have the time. I am not working myself through school. I am studying by day and spending my nights reading magazines and drinking coffee, staying up late with my roommates, arguing about what we ought to do with our lives. My parents don't ask me to work part time. This is what we worked for, they say.

My mother gives me Jamine's address so I can send a Christmas card. Since the death of her mother last March Jamine has been living in Virginia to aid her great-aunt. Sick with Graves' disease and sickle-cell anemia, Jamine wanted to be near family.

I collect information from homeopathic guides. She ought to eat yams, the guides say, true yams, not what are called yams but are really a form of sweet potatoes. These are available in supermarkets that cater to Hispanics. She ought to be exercising, walking several miles daily. But I do not write this advice in the card. Where will she buy "true yams" in Emporia? Her illness has so progressed that she can hardly walk, much less walk miles a day. And I realize how arrogant it would seem if I wrote it in the card, as though I thought I knew more about her illness than she.

I have difficulty picking out a card, making everyone late for dinner. My roommate finally picks it out for me, a cheerful one with holly and red glitter, saying inside, "May the joy you bring to others return to you in great measure this holiday season." But I don't know what else to write in the card. So later I go back to the store and buy another card and copy its message into the first one.