Worried that ecstasy may fry the serotonin cells in their brains, some ravers are taking Prozac. 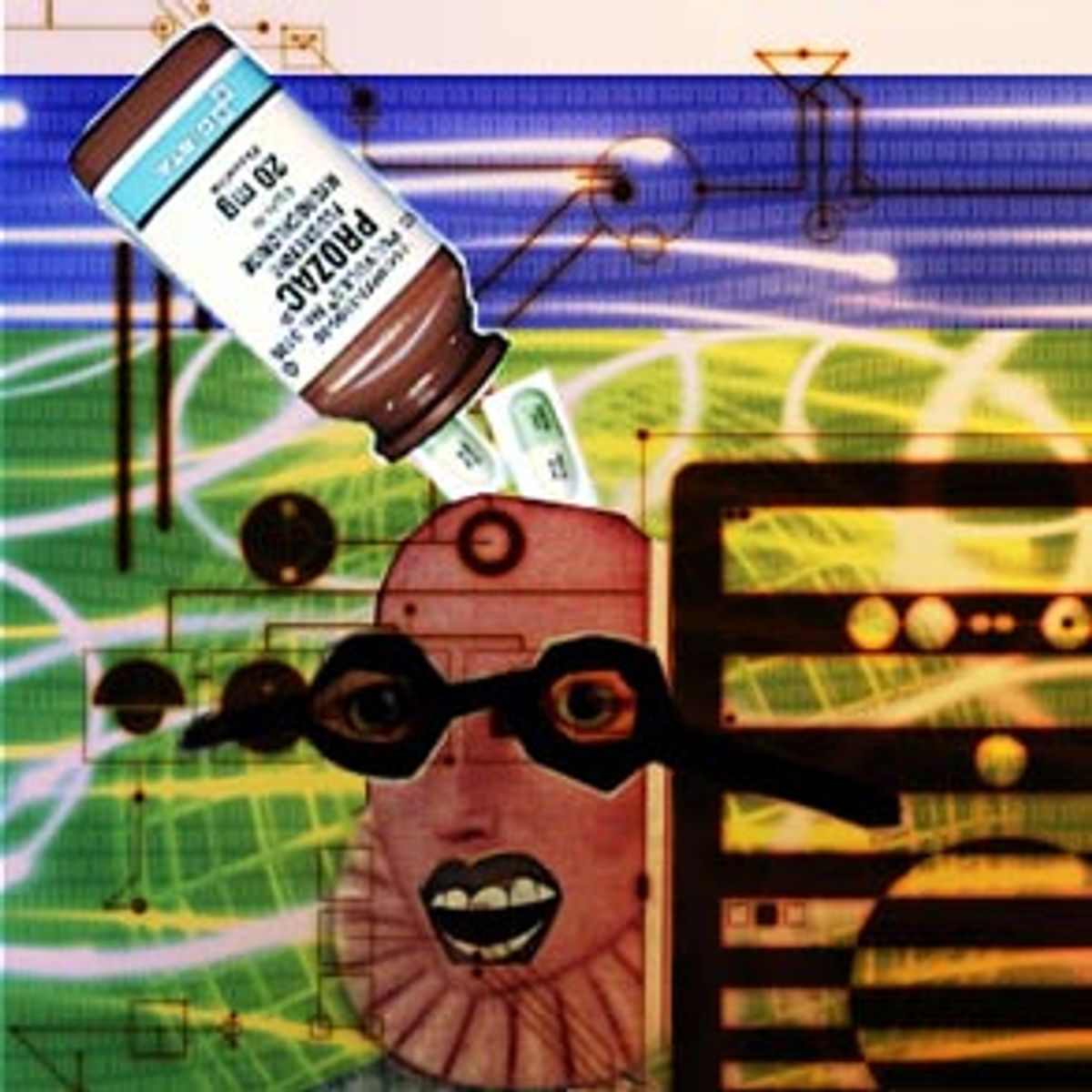 Chris is not about to let a good high ruin his brain. Or at least that's what he thinks. At a popular dance club in lower Manhattan, he plans to take one pill that will make him happy and another that will keep him sane. The first drug of the evening is ecstasy, which will pump Chris' head full of enough mood-altering chemicals to keep him dancing all night with strangers that he feels are his best friends.

The second drug, to be taken after the first burst of ecstasy tapers off, is the antidepressant Prozac. Thanks to scientific rumors that have made their way to the dance floor, Chris is taking the combo in the hope that the prescription mood enhancer will protect his brain from the illicit and more dangerous one.

"I want to keep partying for a long time," says Chris, smiling as if he has a doctor's note for the eternal bash.

Spend time with a group of young ecstasy users and you're not likely to hear much concern that the fun could end for good. It's the nature of the drug. Keep your head in the chemical clouds of methylenedioxymethamphetamine (MDMA), and you can't imagine that anything in the world could ever go wrong. Still, there are some ecstasy fans who seem worried about the long-term consequences of their habit. They have growing reason to. Experiments on rats and primates continue to demonstrate that MDMA destroys serotonin nerve endings, possibly beyond repair. A similar loss in human ecstasy users could mean a higher risk for depression, anxiety and memory problems.

The damage, according to one popular explanation, probably occurs when serotonin cells reabsorb the flash flood of chemicals unleashed by ecstasy. This is where Prozac comes in. By plugging serotonin receptors with a pharmaceutical cork, Prozac and other selective serotonin reuptake inhibitors (SSRIs) seem to keep the brain cells free of toxic trash.

"There is very good evidence that is in fact the case in animals," says Johns Hopkins' Dr. George Ricaurte, a leading authority on the dangers of ecstasy. "Whether this is also the case in humans, we don't know."

For now, such ecstasy defense plans are simply one of those esoteric ideas that get hammered out in research labs. But the strategy has proved quite successful in several different laboratory experiments with rodents. In a study done in Finland, researchers gave rats a bunch of MDMA and then divided them into groups that got Prozac at different intervals. Rats given Prozac for up to six hours after receiving the MDMA showed no signs of damage to serotonin nerve terminals, but the unfortunate rats given Prozac seven hours later or more did.

"In rodents you can essentially get complete protection," says Dr. David Nichols, a pharmacology expert at the University of Purdue. He stops to think of the implications: ravers popping Prozac and ecstasy with a scientific stamp of approval. Angry parents complaining that researchers said it was OK for their children to take drugs. You can almost hear his head shake back and forth over the phone.

"Kids should not take ecstasy," he says firmly.

Indeed, a few lucky lab rats are hardly a ringing endorsement for safer fun through chemistry. Ecstasy is illegal and risky no matter what you take with it. And adding Prozac to the neurological mix may turn out to be harmful as well. Results to be published soon suggest that combining an SSRI with MDMA damages other brain systems in the process of protecting one.

Nevertheless, the idea that certain antidepressants may defend against ecstasy's toxic effects is gaining some credibility with scientists and ravers alike. The theory goes something like this: Ecstasy launches serotonin from special storage cells known as axons. As a result, a tidal wave of chemicals washes over your brain. You feel very, very good. After a while, these feelings start to fade, which means that your axons have probably pumped out all the serotonin that they can.

"From a logical point of view, that would be the point when the toxic insult might occur," says Nichols. With all the serotonin dumped out, the axons are now vulnerable to trouble. Receptors on the cell try to vacuum up the happy-go-lucky chemicals, but in doing so, they may also suck in toxic substances -- either from the ecstasy itself or other brain chemicals like dopamine. The effort involved in pumping these toxins into the axon generates oxygen-free radicals that might damage the cells for good. Prozac, Zoloft or another SSRI can cover the receptor like a blanket, blocking these dangerous substances until they dissipate.

"Using an SSRI at this point is probably as good as using it at any other time," says Nichols.

Ricaurte of Hopkins agrees, but he warns that combining the two drugs may simply redirect the harm to unsuspecting dopamine cells. Keep pounding away at dopamine and you'll eventually come down with a nasty case of Parkinson's disease. This doomsday scenario is based on the fact that SSRIs inhibit an enzyme that metabolizes MDMA, causing an unpredictable jump in the amount of ecstasy you would get otherwise.

"We know that MDMA does not typically affect dopamine systems, unless you really push the dose," says Ricaurte. "What you're doing with Prozac is pushing the dose."

McCann is conducting experiments on animals to see if combining Prozac and ecstasy does indeed spell trouble for other parts of the brain. At the moment, she can only say that it doesn't look good.

"Many, many researchers have shown that SSRIs can prevent neurotoxic damage to serotonin neurons in animals, and there's no reason to believe that this wouldn't happen in humans as well," McCann says. "The remaining question is: What about dopamine?"

But in a world of uncertainties, there are plenty of ecstasy users who are willing to press their luck with Prozac. "We get people e-mailing us with questions about this all the time," says Emanuel Sferios of DanceSafe, an organization that distributes information about taking drugs safely. Partygoers can learn the tricks of the trade on the group's Web site, DanceSafe.com. "We don't advocate that you do ecstasy," Sferios says. "But if you're going to take it, you need to have the right information."

To Dr. Timothy Condon, associate director of the National Institute on Drug Abuse, this type of information sounds more like folklore. "Since there is no research on the protective effects of things like Prozac in humans, it's not something that anyone who is concerned about keeping their brain healthy should be doing," he says.

Of course, the whole debate over ecstasy is based on a slippery slope of allegations. Despite the government jihad against club drugs, no one can pinpoint exactly how ecstasy injures the brain, if at all. It was only in July that researchers documented substantial damage to serotonin neurons in a human subject. Examining the brain of a 26-year-old man who died of a drug overdose (he had been taking ecstasy for about nine years, along with plenty of cocaine and heroin), Canadian investigators discovered that the party animal had 50 to 80 percent less serotonin than a small group of people who did not use ecstasy.

Such changes may simply reflect a temporary shortage, but Dr. Stephen Kish, who conducted the autopsy, suspects the worst. He is attempting a much more complicated study that will look at whether ecstasy permanently destroys serotonin nerve terminals.

"The best way to establish if there is true damage by ecstasy is to essentially find out if there are holes in the brain," says Kish, who is with the Center for Addiction and Mental Health at the University of Toronto. "If this is the case, that would be the worst scenario for chronic ecstasy users."

The barrage of alarmist reports has yet to frighten many away from ecstasy. Feeling that some are going to use club drugs no matter what, Dr. Bob Schuster of Wayne State University in Michigan hopes to take ecstasy research one step further. He has submitted a series of proposals to the Food and Drug Administration to study whether certain strategies can protect those who want to party on. Good luck. "I've been pushing this notion of harm reduction, which is a politicized phrase these days," notes Schuster.

Even so, he is quick to speak his mind on what ecstasy users might do to defend themselves, such as using an SSRI or staying free of an overcrowded dance floor. Citing work from Dr. Louis Seiden's lab at the University of Chicago, Schuster says that if you lower the temperature in a room so that rats do not get a spike in body heat from MDMA, then there are no signs of neurotoxicity. "If you're going take ecstasy, stay cool," he says. "That's easier than buying Prozac."

Obviously, Schuster hasn't been to a club in a while. But while the neurotoxic threat is something to be concerned about, he contends that the dangers of ecstasy are often overstated. "If we did not have the animal data, we would probably not be convinced by the human data," he says. "Friends of are mine who are more responsible with this drug say that you have three or four important experiences with MDMA. Don't waste them."

Eric Sabo is a staff writer for CBS HealthWatch.