3 yards and a cloud of baloney

Defense doesn't win games. The run doesn't set up the pass. And other ways NFL commentators are full of it. 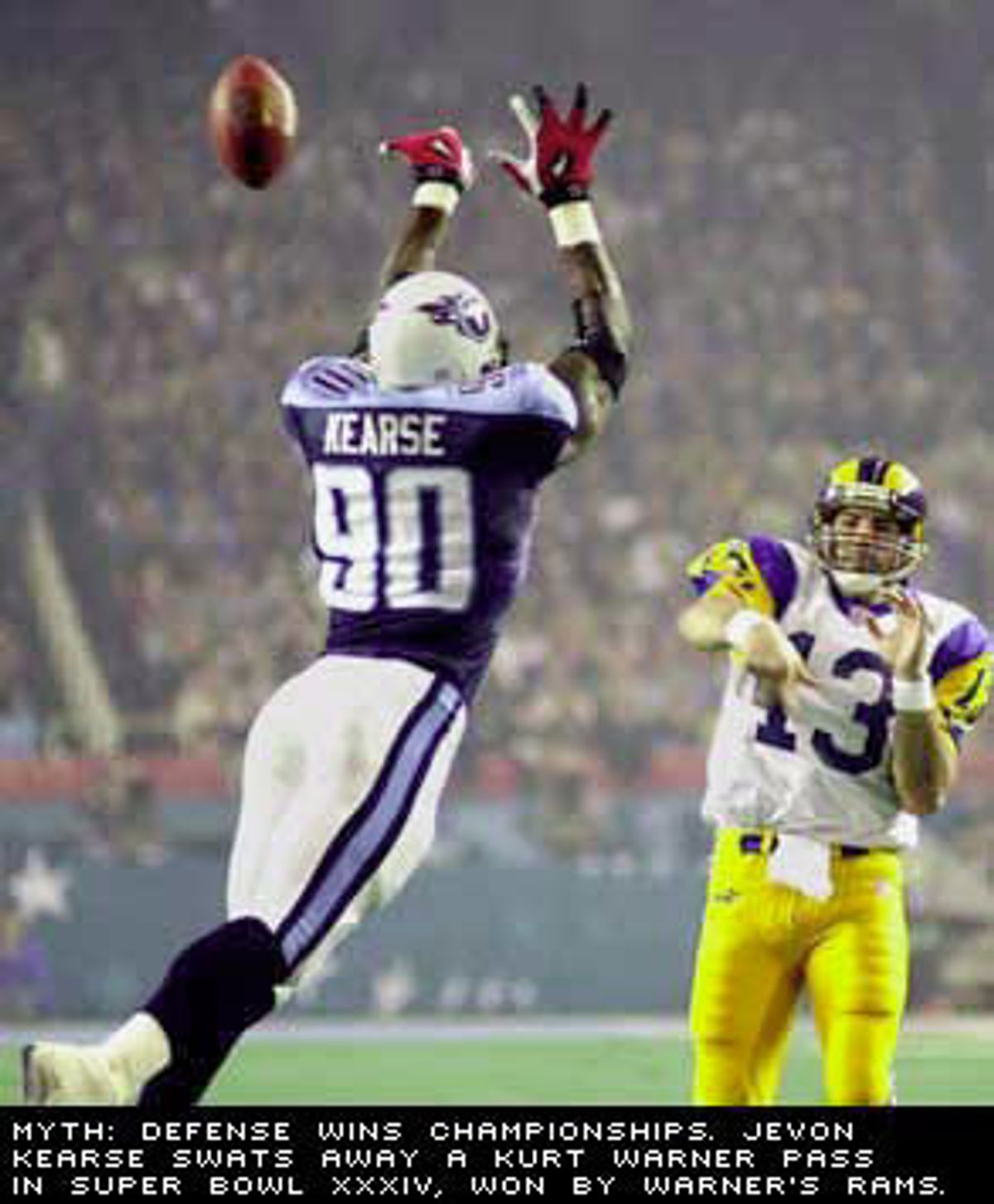 You're going to hear a lot of stuff on TV this year from commentators about what wins and loses football games. Almost all of it will be from ex-coaches -- absolutely the worst source for football wisdom -- and nearly all of it bull.

Here are the top 10 myths in pro football, and what the numbers say is the truth.

Myth No. 1: The importance of the running game

Did having the NFC's highest yards-per-rush (5.0) help San Francisco last season? Did having the AFC's highest (4.6) help Cincinnati? Did drafting Rickey Williams help the New Orleans Saints? Did having the league's best running back, Barry Sanders, help the Detroit Lions for all those years? Did having Eric Dickerson ever help the Rams, or having Earl Campbell help the Oilers? Well, of course those guys helped, but their teams didn't win Super Bowls.

See above. Simply put, offenses built around the run bog down, and you can't unbog yourself with more running -- as the New York Giants are going to find out if they think that Heisman Trophy running back Ron Dayne is the answer to their offensive woes. The 49ers led the entire NFL in rushing yards last year; ask them if it "opened up" the pass for them.

True in one sense only: If you can pass the ball early, you'll have more opportunities to run late. Not true in the sense that a good passing game makes your running game better. If it did, the best passing teams would break more long runs. They don't.

Myth No. 4: The importance of ball control

The Tampa Bay Bucs led the NFC with a time of possession (32:11) more impressive than Linda Blair's. But the Bucs got into the playoffs on the strength of their defense, not their offense. Buffalo led the AFC (32:12) and there are no rings on the Bills' fingers.

Myth No. 5: The importance of the draft

Did you ever wonder why, if the draft is so important, the same handful of teams (Dallas, San Francisco, Washington, Denver, Buffalo, Oakland, etc.) seems to appear in most of the Super Bowls, even though they consistently, because of their winning, have such lousy draft picks? Over the years the NFL draft has not been a device for creating parity but one for maintaining the status quo. What shook up pro football last year wasn't the draft but an economic system that has more key players (like Marshall Faulk) moving to new teams. That, and talent from outside sources like Arena Football League refugee Kurt Warner.

Myth No. 6: The importance of the kicking game

Do you mean punting or field goals? Well, Tennessee went to the Super Bowl last season with the sixth-best punting average (42.5 yards) and the sixth-best field goal average (84 percent) in the AFC, and the Rams, who won it all, were even worse, finishing eighth in the NFC in punting (41.1) and field goal percentage (71.4). The key is not to have to rely on either: The world champion Rams had the fewest punts in the league. And any time you see a team whose kicker is their leading scorer, you know their offense is in deep trouble.

Myth No. 7: A turnover is a turnover

Well, yes and no, but mostly no. Nobody wants to fumble, but the simple truth is that once you reach the NFL level, bad teams don't fumble any more than good teams. Last season the Titans, who were very good, and the Bills, who weren't too far from mediocre, tied for fewest fumbles in the AFC with 17. The Jacksonville Jaguars, who made it to the AFC Championship Game, were next with 18, but Pittsburgh, never in the race at all, was next with 19.

In the NFC, the leaders were Detroit (21), Dallas (22) and Atlanta, Carolina and Minnesota (24 each). There's no pattern to be found there. The only thing that can be said with certainty is that however much losing a couple of fumbles might hurt you in a game, there is no correlation, from season to season, between fumbling and losing. And once the ball is on the ground, it's usually a 50-50 shot at who picks it up.

On the other hand, interceptions usually give you a clear picture of good teams and bad teams: Bad teams (such as New Orleans and Arizona, with an NFC-leading 30 interceptions, and San Diego, with 24 in the AFC) always, always throw more interceptions than good teams. You'll get a clearer picture of a team's offensive strength if you simply leave fumbles out of the equation altogether.

There's an easy way to settle this age-old argument: Simply look each season to see how the winningest teams finish in points scored and points allowed. Last year was typical: In the NFC the Rams were second in points allowed to Tampa Bay, 242 to 235, but scored 526 points to lead the league. (The Bucs scored 270.) In the AFC, Tennessee had an off year on defense, allowing an 11th-best 324, but the Titans were second in scoring to the Peyton Manning-led Colts (392 to 423). The fact is that at the pro level you can hide defensive weaknesses by consistently having the lead, but you can't go all the way on just defense.

Some winning teams do well on third-down conversions -- the Rams led the league with 46.9 percent -- while some, like Tennessee, 28th among 31 teams at 30.2 percent, don't. What's important isn't third down but first down. The Rams were first in average yards per play with 6.5, while the Titans were third in the AFC at 5.2.

Wrong. Remember what Napoleon said about God being on the side of the army with the biggest battalion? Well, in football, the ball always bounces in the direction of the team with the best quarterback.