"Nothing Like It in the World" by Stephen E. Ambrose

The bestselling historian serves up the stirring tale of the unsung men who built the transcontinental railroad. 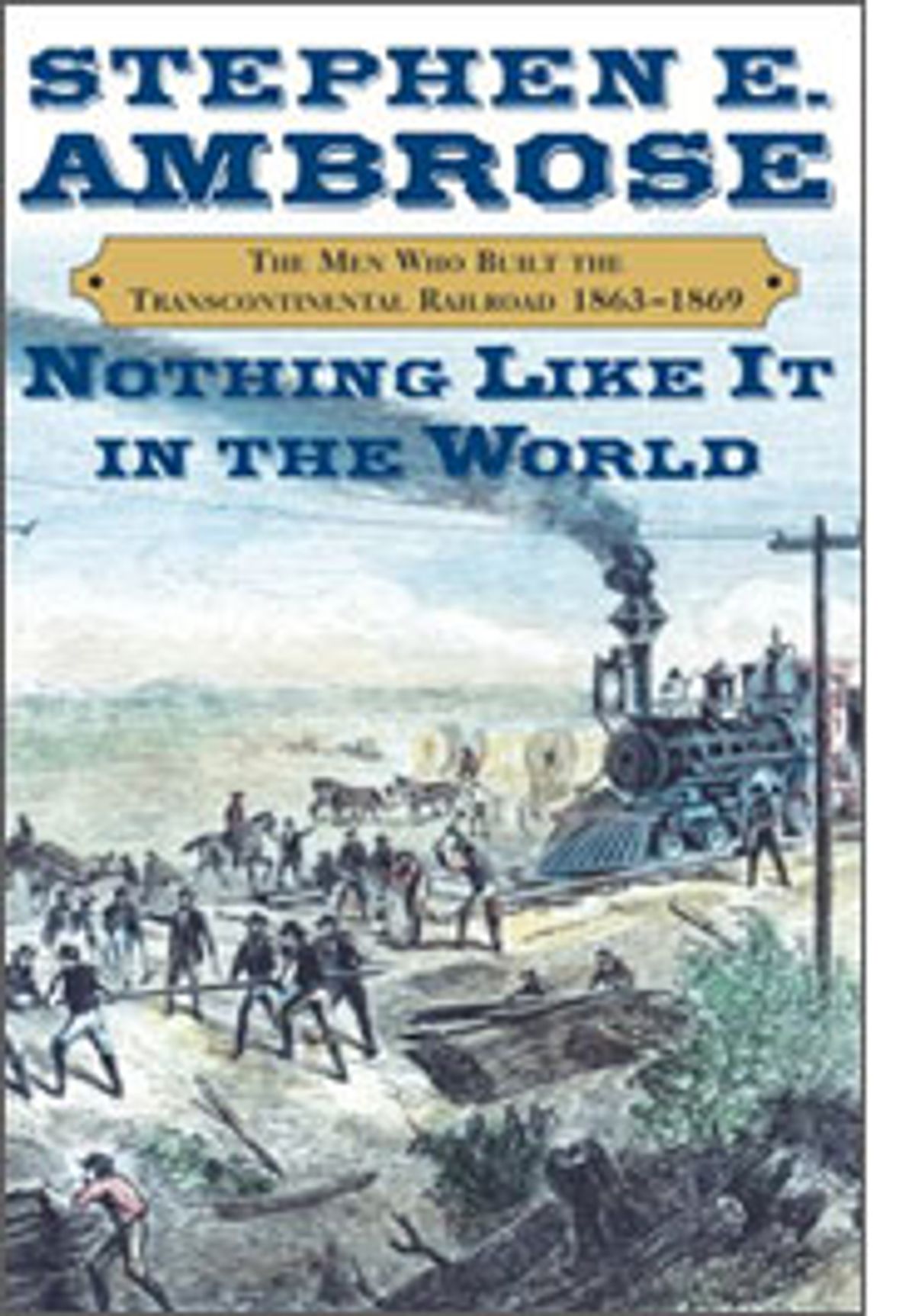 Walt Whitman's poem "Passage to India" is supposedly about the union of America and Asia, but it never quite reaches the Ganges. It lingers instead on the Sierra Nevada and the plains of the Midwest. That's because the inspiration behind the poem was an American event: the completion of the transcontinental railroad in 1869.

Stephen E. Ambrose is a historian in the Whitmanian vein. He is popular, prolific and patriotic, and his writing tends inexorably toward the grandiose. Ambrose has written on Eisenhower and Nixon, D-Day and Lewis and Clark. His bibliography includes works with titles ("Stephen Ambrose Collection" and "The Best of Stephen Ambrose") typically reserved for aging rock stars.

His latest hit, "Nothing Like It in the World: The Men Who Built the Transcontinental Railroad, 1863-1869," is, like most of Ambrose's work, primarily an exercise in storytelling. And Ambrose tells a good story, describing the job of building America's grand iron highway as a nip-and-tuck race between the Central Pacific (CP) in the West and the Union Pacific (UP) in the East.

Running that race were the great white men who made the railroad possible: financiers such as Leland Stanford and Collis Huntington, politicians such as Abraham Lincoln, generals such as Ulysses Grant and William Sherman and even religious leaders such as the Mormon patriarch Brigham Young. The key characters in Ambrose's drama, however, are not those power brokers but, as his subtitle suggests, the tens of thousands of Chinese, Irish and Mormon laborers who graded the track, laid the ties and drove the spikes.

These men encountered all sorts of obstacles. Weather was one. They fought desert heat and mountain snowstorms. In fact, snow came down so hard in the Sierra Nevada that Central Pacific workers built nearly 50 miles of snowsheds to shield themselves and their work. Indians were another obstacle, conducting what Ambrose calls a guerrilla war against the onslaught of modern America and its steam-driven dynamo. Between 1863 when the railroad building began and 1869 when it ended, laborers were also killed by avalanches, nitroglycerin blasts, exploding engines and runaway trains.

But those who survived triumphed. They drilled tunnels through granite with nothing more than black powder. They laid track at over 8,000 feet. In the spring of 1869, Central Pacific workers built 10 miles of track in just one day. On May 10 of that year, Southerners and Northerners, Easterners and Westerners came together to witness the driving of the famous Golden Spike at Promontory Summit, Utah, that linked the eastern and western lines.

In the past, historians of the transcontinental railroad have been inspired more by Ralph Nader than Walt Whitman. They focused on the greed and corruption of the Gilded Age railroad barons. They spun morality tales, cautioning liberal readers against the evils not just of monopolies but of capitalism itself. Ambrose's story is different. While he criticizes the capitalists, he praises them, too -- as "men ready to take great risks and to accept great profits" (as if the latter were a difficult chore). He also defends the key role the government played in financing the railroad, arguing that some enterprises are just too grand to be left entirely to the private sector.

The theme of "Nothing Like It in the World" is not greed but greatness. Here the United States appears as a daring nation populated by courageous capitalists, politicians and laborers willing to do great things. Among the greatest of those things was the construction of the transcontinental railroad, which in Ambrose's telling did nothing less than make modern America. While the victory of the Union in the Civil War kept the country from flying apart, he argues, the transcontinental railroad bound it together.

"Exaggeration is endemic to railroad historians," Ambrose admits, and he has certainly caught the bug. The challenges facing the CP builders were, in his words, "unique in engineering annals," while a UP bridge was "one of the greatest engineering feats of the nineteenth century." The financing controversy that swirled around the project was "the largest scandal in America's nineteenth-century history." The day the CP laid 10 miles of track "will be remembered as long as this Republic lasts." As for the railroad itself, well, there was "nothing like it in the world."

What you think about this book, which reads in places more like a State of the Union address than a work of history, depends almost entirely on what you make of America. Most American studies professors I know would applaud Ambrose's decision to emphasize the achievements of Irish and Chinese immigrants, but they would sneer at his exceptionalism -- his smug assurance that America is the best and brightest of nations.

"Only in America," Ambrose sings in a concluding Whitmanesque chapter, was there enough space, enough labor, enough government support and enough "energy and imagination" to make a transcontinental railroad a reality: "The railroad was the longest ribbon of iron ever built by man. It was a stupendous achievement. It spanned a continent, opened new lands for settlement, opened the mountains with their minerals. It had crossed a frontier of immense possibilities. It had inaugurated a new age" with a "nationwide stock market" and a "continent-wide culture."

That is the sort of triumphalist rhetoric that makes many professional historians retch. But history isn't written just for professionals. If Walt Whitman were alive today he would be singing Stephen Ambrose's praises -- and riding what remains of the rails.