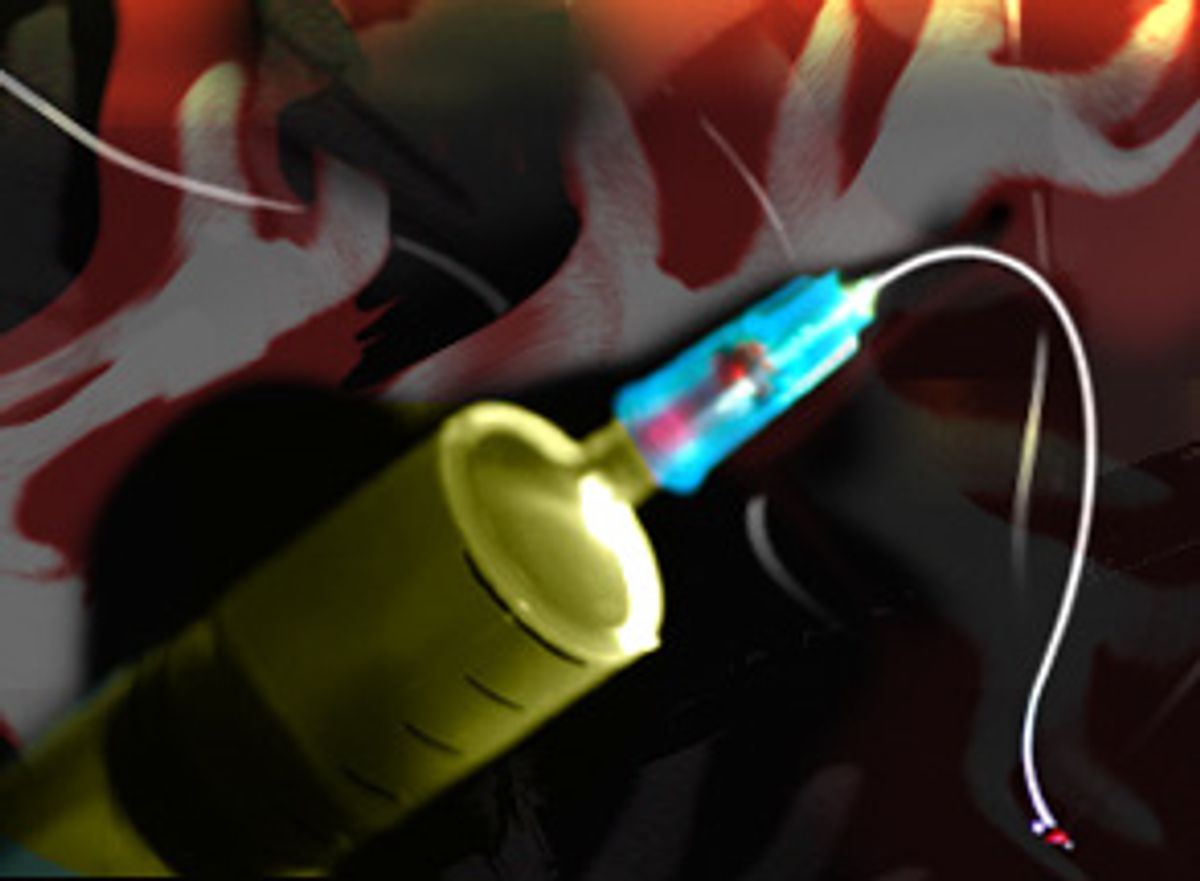 Tom battled for years to control his obsessive sexual attraction to teenage boys. It eventually landed him in court for stalking.

"It's kind of like if you have a big sweet craving, when you think about it all the time," he says. "I would hang around with teenagers and then things would happen."

The 47-year-old, who asked not to be identified, isn't the typical picture of a sex offender. Thoughtful and articulate, he lives with his wife and together they've made a commitment to work through his sexual deviance. And so far, he's proud to report, they're succeeding. Why? A drug called Lupron gets at least partial credit. The drug decreases testosterone, the hormone that fuels the sex drive. Tom's desire for intercourse is almost nil now -- but along with it has also largely gone the lust for adolescent boys.

"It's a big help," he says. "I would be OK without it because I'm committed to working on this deviant behavior, but it would be a lot harder. It would take a tremendous amount of will power."

Lupron is one of the latest in a series of drugs, called antiandrogens, that trigger a reduction in the production of testosterone. Most commonly used to treat men with prostate cancer -- like New York Mayor Rudolph Giuliani -- and women with endometriosis, it also serves as a "chemical castration" to treat sex offenders.

His treatment? Six weeks of therapy and Lupron.

Campanella's claims that Lupron can catalyze a quick-fix cure for sexual deviants has raised many questions about the use and efficacy of chemical castration drugs and the very essence of sexual deviance itself. The theory behind Lupron is that reduced sex drive results in a greater ability to control deviant sexual urges, but can flipping a testosterone-laden switch really turn off deviant sexual thoughts? Don't sexual predators and pedophiles prey on vulnerable people and children in part out of a psychological desire to dominate or inflict pain? Can we really transform a person's ethical system though tinkering with their chemistry? Is immorality in the end a treatable physical disability?

Most medical researchers would argue that sex offenders aren't "cured" by such a quick-fix solution. They maintain that Lupron is just one part of a complete and complex treatment regimen. But still some clinicians wax enthusiastic about its ability to transform the dangerous but well-meaning perv into an upstanding citizen.

"It's a wonderful drug," says Dr. Gabrielle Paladino, a psychiatrist who works in a treatment program for convicted sex offenders at California's Atascadero State Hospital. "It's great to see that someone who can't keep their hands off people is able to control those urges."

Other doctors, however, remain skeptical of such ringing endorsements. "There are so many misconceptions about Lupron and other drugs like it," says Dr. Fred Berlin, associate professor and founder of the Johns Hopkins Sexual Disorder Clinic. "Some people respond well to it, others don't. Each sex offender is different."

Lupron differs from Depo-Provera, another common antiandrogen, used primarily as a form of birth control for women. Instead of releasing a form of progesterone into the body as Depo-Provera does, Lupron works directly on the brain. By tripping up the hormone in the brain that signals to the pituitary gland to produce estrogen in women and testosterone in men, it has a generalized desexualizing effect.

"In a sense, you can say the sexual drive for both men and women begins in the brain with GnRH [gonadotropin-releasing hormone], which starts working at puberty," says Dr. Richard Spark, associate professor at Harvard University and author of the book "Sexual Health for Men."

Studies in Europe and the United States have shown that castration, whether chemical or the old-fashioned surgical kind, does tend to lower recidivism rates among sex offenders, Berlin says. In a report published two years ago in the New England Journal of Medicine, Israeli researchers found that all men studied responded with a decreased number of sexual fantasies and deviant sexual acts when treated with a combination of therapy and triptorelin, a Lupron-like clone medication. Though, interestingly, they noted a lag time of 10 to 11 months between the physical reduction of testosterone levels and reduction of sexual thoughts.

Still, even doctors who've had good results with Lupron don't believe it can help those with violent tendencies. "Of course, some sex offenders don't need much in the way of testosterone to offend," says Paladino. "Many of these people have problems in their head, not their genitals."

Paladino and Berlin deal with patients on different ends of the clinical spectrum. Paladino's clients are convicted sex offenders identified before the end of their prison term as "sexually violent predators" who must receive treatment before being released, while Berlin generally deals with clients on an outpatient basis, who generally exhibit less extreme pathologies. Still, they've both noticed improvements in some of their patients who take Lupron.

"I've treated many men who took it and it helps them," says Berlin. "But I would never recommend using it strictly on its own. It's not like throwing a switch, it's more subtle ... when I'm hungry, for example, I'm thinking obsessively about food. But absence of hunger is not a presence, and therefore it's hard to measure. But certainly, with an absence of hunger, I'm less likely to eat."

Paladino says Lupron works for different reasons on different types of offenders. "It's a very effective treatment for a psychopath, for example, as an external control or monitor ... But for other patients who are tormented by sexual thoughts, Lupron is a godsend. I have a guy who drops his pants in front of female police officers in the hospital. He just can't help himself on his own."

Regardless of the effectiveness and understanding of the proper use of Lupron and other testosterone-lowering drugs, the political reaction to castration ranges wildly from horror to blind faith. In 1996, convicted sex offender Larry Don McQuay actually begged for the state of Texas to castrate him before he was released. (State officials refused to perform either a surgical or chemical castration). The same year, California passed a law mandating that certain types of convicted sex offenders on parole be required to take a Depo-Provera injection.

"I'd call myself a moderate," says Berlin. "I think no one should be forced to take any of these drugs, but certainly, the drugs should be made available to those who want it."

Tom, one of Berlin's patients, says he couldn't maintain his ordinary married life without Lupron. And despite the fact that he's suffered the drug's worst side effects -- flushing, bone mass density problems and lowered sex drive -- he's become one of Lupron's biggest fans.

He concedes that his use of Lupron has caused certain problems in his marriage. "I can just barely have sex with my wife," he says. But, he quickly adds, being free from deviant sexual thoughts is worth whatever sacrifices they have to make. "In a strange way," he muses, "you could actually say it's brought us closer."