A newlywed lesbian couple talks about the meaning of their Vermont don't-call-it-marriage. 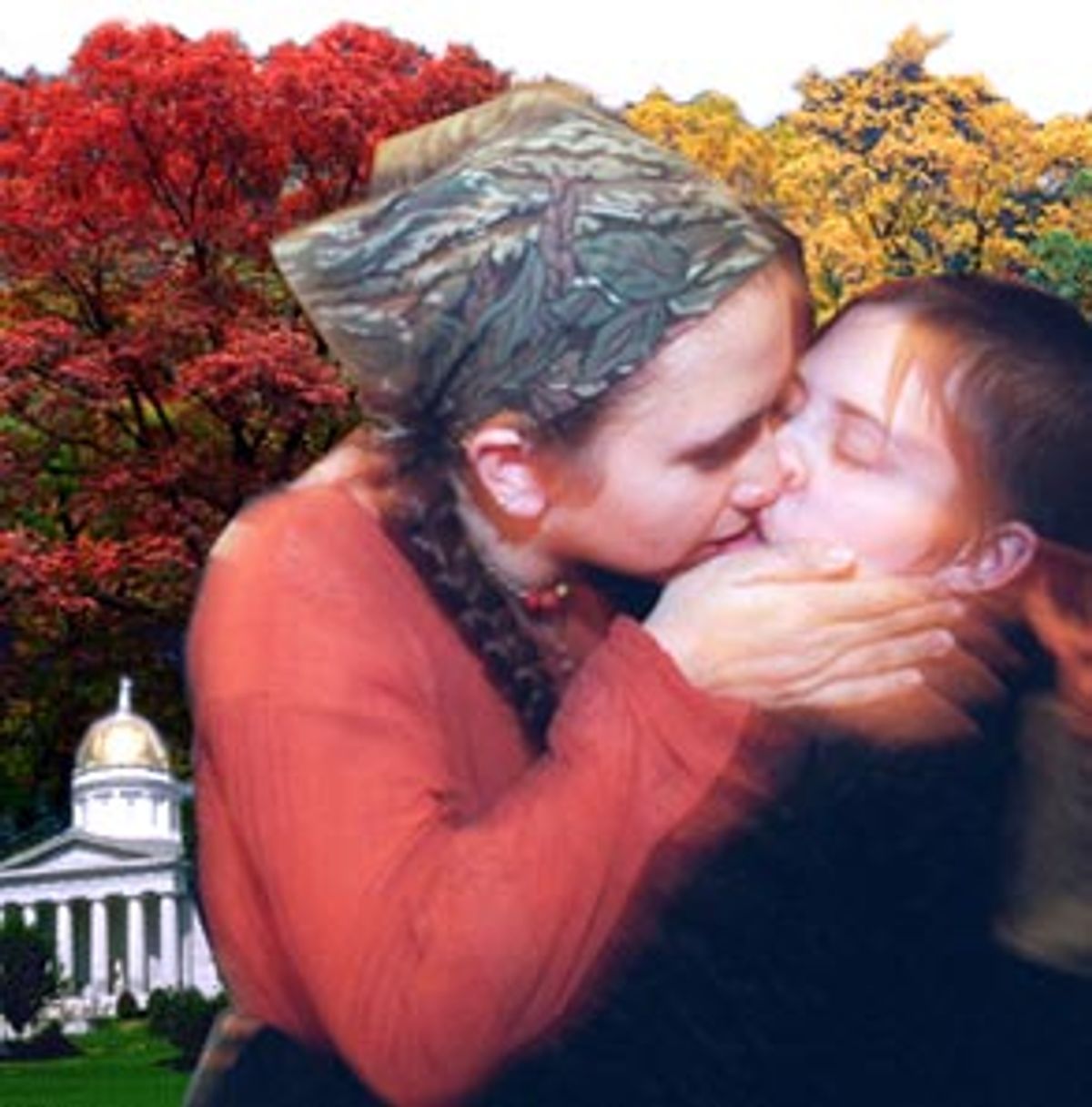 One hundred years after Oscar Wilde's death, homosexuality can speak its name in the United States. It still has trouble, however, saying "marriage."

Vermont has struggled with the "M-word" all year. The state Supreme Court ruled in December that same-sex couples must be allowed "the common benefits and protections that flow from marriage under Vermont law." The court pointedly left it up to the Legislature whether to let gays into the hallowed institution or set up "a parallel 'domestic partnership' system." In January, lawmakers began hearing public testimony in the gold-domed Statehouse in Montpelier.

One of the citizens testifying was Montpelier plumber Ann Ross. She has lived almost half her life with Emily Tanner, the last 14 years in a huge Victorian house painted lavender. She declared to the Legislature, "I've been wanting to marry Emily for 20 years."

"I used the word 'marriage' and the word 'wife' in my testimony because it's part of our culture in the United States," explains Ross. "You want to run up to someone and say 'I got married today,' not 'I got civil unioned today.' The words are painful and stressful. It's like when you refer to your 'partner' and people say, 'Oh, what's your business?'"

But the Legislature opted for the parallel system, and the language in bill H.847 does deaden the romance of marriage. "Groom" and "bride" are amended to "one party to a marriage or civil union" and "the other party." And, as Ross points out, the lack of a real verb can steal a lover's thunder. It's a semantic but significant cheat, to offer gays the tax breaks, insurance coverage and medical decision-making rights but to deny them the corny poetry of those four little words every girl -- or boy, or party to a civil union -- wants to hear.

Because no matter how sophisticated we act, Americans can't shake the mysterious mojo of marriage (why else all the outrage over "Who Wants to Marry a Multimillionaire?"). Matrimony's hold extends beyond the Christians who descended on Montpelier by the busload to defend it from "Adam and Steve." Weddings turn smart, cynical women with mortgages and careers into girls playing with Barbies, dressing their friends all alike and themselves like fairy princesses, while their fiancés play almost-trapped prey in bachelor party rituals. The purely symbolic power of "I do" rang clearly from Vermont this summer: Of the 434 same-sex couples that tied the knot between July 1 and August 25, 296 were from out of state, where their vows are legally meaningless.

Ross and Tanner had been civil unioned a week when we talked over herbal tea in their sunny, cluttered kitchen. Though Tanner calls herself the "lipstick lesbian" of the couple, she played the grudging groom when she and Ross tied the knot in their living room. Even after the Vermont law passed, Tanner just wasn't sure she wanted to commit; this after living with Ross for 20 years and raising two children together. "People always laugh when I say that," she admits, "but I've been there and done that; I didn't want to be married anymore."

Once they decided to civil unionize, Tanner says, "[Ross] wanted to rent an arena and have Melissa Etheridge play. I was just as happy to have our little shotgun wedding at home." Ross -- short-haired, burly, reticent -- says she never liked girl stuff growing up. But she's longed for a wedding with Tanner: "I took her to Vegas one year and bought us rings. I just felt we should celebrate our lives."

Ross's previous "marriage" makes a lesbian civil union look like Ward and June Cleaver. Tanner's nuptial history is more traditional: In her early 20s, she married a man named Doug and they built a house and had a baby. She and Doug were intellectually compatible, both "hippies and into free love," but fairytale propaganda nonetheless poisoned the relationship.

"Growing up as a seemingly heterosexual girl, it seemed like marriage was the answer," Tanner says. "All of the incredible romantic promises of what happens between people -- what you are to them and what you'll be to them ... [the idea] you got carried away from all of the trouble and heartache and the prince made everything better." To her surprise, she found these expectations "literally kicked in at the ceremony and right after."

Husband and wife were both disappointed in the reality, and Doug moved out when their son, Silas, was 2. Tanner then took up with a mechanic named Mark, "a redneck who turned me into a feminist. He wanted me barefoot and pregnant and would take care of anything. It was different from my partnership with Doug ... but I needed someone who could fix things and plow my road." Mark moved in and, around this time, Emily Tanner, town librarian, met Ann Ross, the water commissioner.

Ross relates her wild romantic history with charming Vermont understatement: "When I was very young I left home and lived with a man and a woman," she begins. Lived with? Ross shrugs, "What they call a ménage à trois. Then when I was 19, we all decided to have a baby and I got pregnant because the other woman couldn't. So I had [her daughter] Grace and then we all adopted a kid."

After six years of three-way union, the women split off as a couple, "mostly because the guy had a drug and alcohol problem," Ross says. "Then a year later she and I split; I took Grace and she took the adopted kid." She says the ménage à trois "worked OK, but nobody ever quite got everything they needed."

The baby was born with an infection and died 10 days later. Ross and Doc never regained their equilibrium, and Doc moved away. Ross could see Tanner's house from hers and she'd stare out the window, "just waiting for the moment that Mark would leave for work so I could go up there."

Ross first knew she was in love with Tanner during her second pregnancy. "It was that kiss in the truck," she remembers, gazing across the table at her new other party to a union. Tanner replies stiffly, "Well, I'm slower. I was going to college and learning about feminism and it was all an intellectual as well as an emotional journey for me. ... Then my mother got sick and moved up here and Ann put in another bathroom in my house."

Tanner says jealousy tipped the scales. "Ann was with another woman, and that did it for me." Ross waves off the ancient fling: "Big deal, one night." Tanner laughs, "It was two nights; you didn't come home for two nights." She'd been looking out her window, too.

Mark moved out, and Ross moved in with Tanner half a year later, early in 1980. Ross says, "We decided to call our anniversary Valentine's Day because it took her so long to let me stay. She wasn't letting me into drawers."

Two old friends drop in during our interview, and Ross displays the new rings, silver bands with a gold triangle. She also passes around a store-bought "Congratulations on Your Civil Union" card and the wedding pictures. Smiling into the camera are Ross and Tanner; Silas, now 27; Grace, now 25; and the justice of the peace.

For her part in the ceremony, Tanner read a love poem by Margaret Atwood, which she'd downloaded from gayweddings.com. Ross came up with a simple, heartfelt promise to trust, honor, cherish and "love you today, tomorrow and forever." She concluded, "I give you my life to keep/So help me God." Silas and Grace both cried at the ceremony; now they joke that they're legitimate at last.

What finally convinced Tanner to make it legal was the medical double-whammy of red tape and a reminder of mortality. She had a small stroke August 3, and Ross called the health center a few days later to ask about her treatment. Ross was told she couldn't get any information if she wasn't related to Tanner, and she yelled back, "Well I would have been married to her 20 years ago, but we couldn't do that till a month ago!"

Tanner was sitting next to Ross. "So I'm listening to this conversation, thinking I could die or become disabled, thinking about Silas making the decisions about me ... So we went down to the town clerk's office and asked to be civilly unionized."

Though the final straw for Tanner was medical bureaucracy, both women talk much more about the symbolism of their step than the legal benefits. Ross's plumbers' union covers domestic partners, so Tanner's already on her insurance. Only once, toward the end of a two-hour conversation does Tanner say, "I'm curious to see how it affects my taxes."

Tanner explains that her decades of hesitation had nothing to do with Ross. "I didn't want to be once again in somebody else's idea of why people love each other and raise kids together. I was so disillusioned in my youth from that." But her other party to a civil union's happiness has seeped into her own. "The expression on her face," she says, "was worth getting married."

And Ann Ross is loving happily ever after, showing off her ring to everyone in Montpelier and ignoring the Legislature's terminology. "I didn't realize how validating it is getting married until this week," Ross burbles. "Like I know it's a regular thing people do, but I've never checked out if people wore wedding rings before. But now I'm so happy I have one on, I look at everyone's hand," she says, waggling her fourth finger. "It makes you feel like a grown-up, like you've got something wonderful going on."