If George W. Bush can't handle a real showdown, he doesn't deserve to be president. 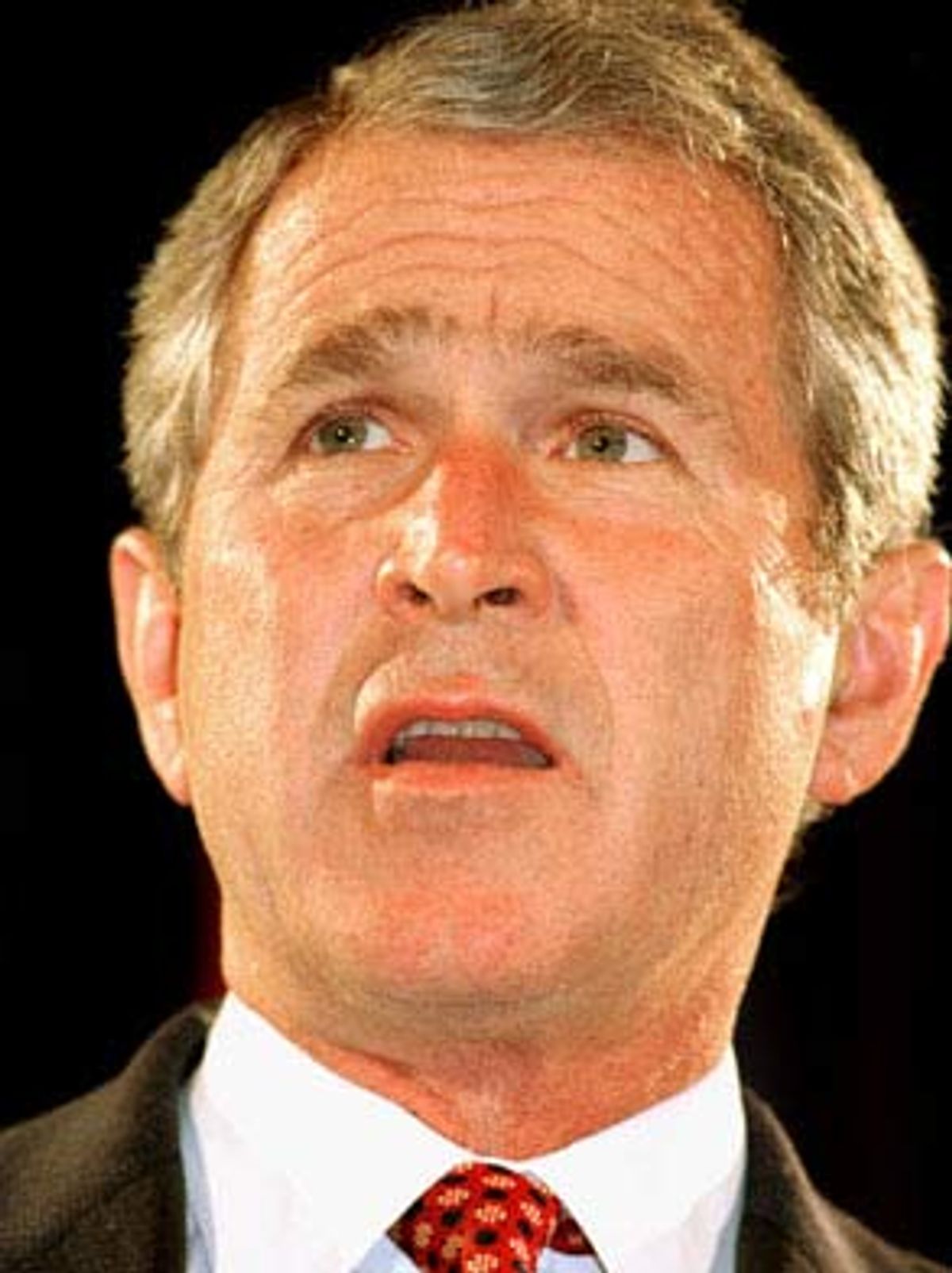 It's time for some plain talk, as George W. Bush likes to say: Any man who runs from prime-time network debates doesn't deserve to be president. The governor and his explainers can spin like tops, but no serious voter believes that Bush has met Al Gore's debate challenge by announcing he'll be happy to sit down with Larry King and Tim Russert, in a cozier format than the three formal, prime-time debates proposed by the bipartisan Commission on Presidential Debates. (Also a much less-watched format: "Meet the Press," Russert's show, and "Larry King Live" combined draw fewer than 5 million viewers, compared to the 90 million viewers who watched the Bush-Clinton debates in 1992.) What is clear to any objective observer is that Bush is running from a big showdown with his opponent. And the reason is just as obvious. Bush lacks Gore's attack skills, verbal dexterity and quick command of the facts (some would say simply his I.Q.), and no fighter so unmatched would ponder such a duel with relish.

But if Bush risks looking unpresidential in a formal debate with Gore, he looks like a schoolyard coward by dancing around the Debate Commission's challenge. Gore has properly agreed to meet Bush on his chosen turf, but only if the GOP candidate also agrees to three formal debates. Russert is a tough questioner, and the public is likely to glean some useful information and perspective from a presidential confrontation on "Meet the Press." But King is no Mike Wallace and Bush loses some desperately needed gravitas points by even proposing the softball CNN format as one of three debate venues.

A refreshingly candid "Republican strategist" was quoted in the New York Times as saying that Bush was rejecting the more formal structure of the commission-sponsored debates because "he's concerned about filling the full two-minute answer" in such a format. "Larry will bail him out," said the strategist, referring to the avuncular King. "Larry will keep it moving."

(This might be wishful thinking -- it's not clear that Bush would fare well even in the warm glow of King's chat show. The final collapse of Ross Perot, long one of King's favorite guests, came when he went one-on-one with Gore on the show over NAFTA.)

Back in March, Gore called for twice-weekly debates with Bush. In late August, Bush finally responded (sort of) to this bold challenge by telling reporters that he would "welcome prime-time debates" during the fall. "Who said we don't want prime-time exposure?" the Republican contender said on his campaign plane.

Bush should stick with this plucky attitude. For however he fares against Gore (and there's always the possibility of a surprise -- don't forget that Ronald Reagan was written off as a sparring partner for Carter and Mondale), he looks much worse as a yellow-bellied debate dodger.

The American voters deserve to see Bush and Gore face off in the traditional fall classics. This is one institution that should not be eroded by spin, campaign tactics and apathy. The candidates also should be tossed into the less predictable new arenas of public discourse -- from cable talk shows to Internet forums. In fact, today Salon formally invites the candidates to debate one another in our Table Talk public forum, fielding questions from online political reporters such as our own Jake Tapper and Slate's Jacob Weisberg as well as from Net readers.

The public deserves a presidential campaign that is not completely scripted. Let the candidates venture as far out of the sound-bite box as their courage allows; let their mettle be tested by as broad a swath of inquiring Americans as possible.

And finally, to help ensure this campaign addresses all the crucial issues before the country, open at least some of the debates to Ralph Nader and Pat Buchanan. The drug war, abortion and the death penalty are just three of the issues that Bush and Gore would rather ignore unless otherwise pressed. A four-way slugfest would help ensure that hot-potato topics like this will not be swept under the rug. Gore has been cockily self-assured about taking on Bush in the debate ring. But his campaign has run from a public showdown with Nader. If the Democratic candidate is serious about giving voters a complete view of the presidential contest, he'll agree to meet all three of his challengers.

Both major candidates are fond of talking in lofty terms about the honor of running for the American presidency, about the grand four-year ritual of choosing our national leader. But if this is to be more than campaign blather, both George W. Bush and Al Gore need to air out the corporate boardroom that our American democracy all too closely resembles. Let fresh ideas pour in, let the contestants clash for all to see, let the blood and sweat of the spectacle refresh the thin soil of our democracy (and their gladiatorial writhings entertain, if not ennoble, us). And may the best man win.