A new attack ad that bashes Bush on healthcare has our panel cheering -- and jeering. 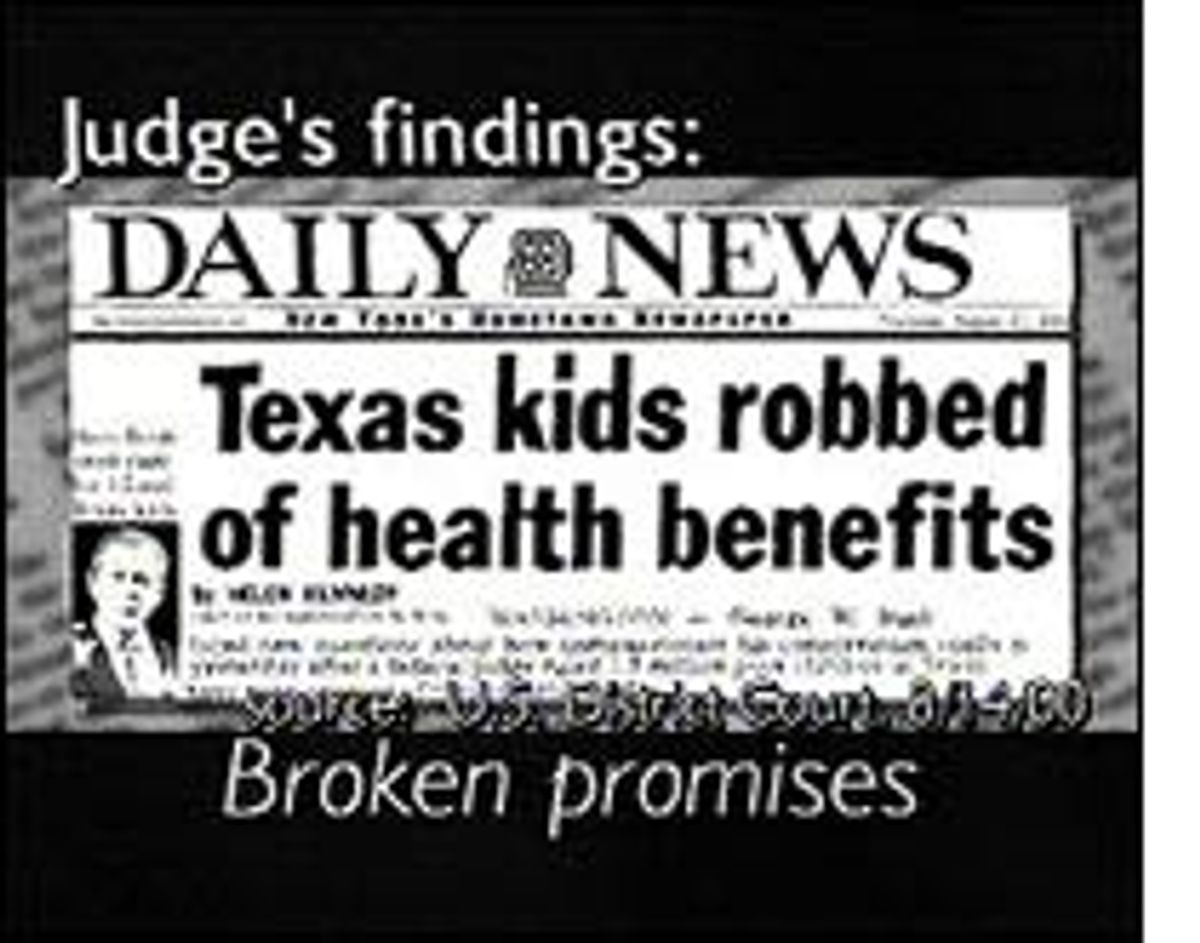 Both Al Gore and George W. Bush have promised to run a high-road campaign with minimal attacks on each other. So they're leaving the mudslinging to their soft-money-fattened party committees. The Republican National Committee sponsored a weekend ad blitz featuring "Really," a commercial questioning Gore's character. With its own new spot, "Judge," the Democratic National Committee strikes back, bashing Bush's record on healthcare in Texas. Salon's political advertising panel is split on whether the ad is a hit, a near miss or completely off base.

I try to keep my own personal political views out of my critiques of these political ads and judge them purely as ads. So here are some of my criteria as a creative director when I look at a wall full of concepts:

Does this ad begin to build a brand? How does this differentiate brand A from brand B? What does this ad say about the brand? Is the ad executed in a way that feels like it comes out of the brand's natural personality? Does this ad break through the clutter of the advertising that surrounds it? And, perhaps most important, has anyone ever done this (like exactly) before?

Basically, this ad sucks in so many ways it's hard to either begin or truly be complete.

1. I have seen this ad a thousand times before, featuring a menagerie of candidates, focusing on a plethora of issues. I could practically order this creative execution off a menu at McDonald's. "The Super Mudsling!" Insert his/her face here. I hope no one paid money for this creative.

2. Build a brand? Differentiate candidate A from B? Bleary-eyed, I looked at this ad four times before it really sunk in which candidate this ad was even for. It could have so easily been for the other guy or even another race or another year. There's nothing distinctive or proprietary here at all. Is there any other "brand" in America who could afford to throw their money away like that?

3. As for clutter -- this ad breaks through the clutter like a plastic knife through a frozen pizza.

4. This is when I begin to calm down and try to say something nice. Well, the enunciation was lovely. Good job.

Richard Blow is the former executive editor of George magazine, and is writing a book about John F. Kennedy Jr.

So the Gore camp watched while Bush went negative first, then hits back harder and smarter. After months of bumbling, they're on a roll.

This ad ostensibly speaks to issues, not character -- where it's easier to attack without getting mud on yourself. But listen carefully: "George W. Bush says he has a plan for children's healthcare. So why hasn't he done anything about it in Texas?" That's an implicit suggestion that Bush is a liar who has no plan whatsoever. The ad reinforces that message by taking video of Bush out of context -- that shot of him hanging his head, looking ashamed, in the beginning, and then after all the shots of sad-looking kids, Bush turning his head shiftily, as if to avoid looking the tykes in the eye.

Beyond the insinuations against Bush's character, the attack on W.'s healthcare record is effective. It plays into stereotypes of Bush as a policy lightweight and Texas as a backwater where shoeless poor children play in dirt backyards. (Shades of Boston Harbor circa 1988, and isn't that poetic justice?) We're inclined to believe this ad because these are impressions of Bush and Texas that many of us already carry. Then you throw in the image of a "federal judge" spanking Bush as if he were a child, and the point is really driven home -- heck, they're all just playing in the dirt down there, children and grown-ups alike.

Maybe most important, after months without traction, Al Gore is now setting the agenda for this race. This ad continues a debate Democrats win -- healthcare. (Well, except for Hillary.) Bush just came out with a Medicare plan emphasizing competition among HMOs. Think the Gore folks could make an attack ad out of that? I'd be surprised if they hadn't already.

Jonathan Foreman is a film critic at the New York Post.

Less amusing but more telling than the GOP ad that made fun of Gore for his claim to have invented the Internet, this ad does deserve some credit for at least touching on real political issues (even though most normal people are instantly turned off by any person or thing that mentions the dread subject of healthcare policy).

I also like the way that -- with its head shots of sad children, including a sorrowful little black girl -- the ad referred back to and implicitly mocked Bush's first education commercial.

That first statistic, about Texas coming 49th out of 50 states in children's healthcare, is undeniably effective, even devastating (although we don't know if the situation improved or declined during Dubya's term in office), as is the anecdote about the court ruling.

On the other hand, people are unlikely to get too hot under the collar about the Texas government's supposed failure to inform families that their children might be covered by a federal insurance program. It's a namby-pamby, wonkish point that could push the wrong button for voters who figure that citizens who care about their kids ought to be capable of asking questions or looking things up for themselves.

Still, it's the kind of ad that could win over an intelligent independent, until you get to that strange, clumsy last line -- "Bush's record. It's becoming an issue" -- which lets down the whole show.

First of all, it's irritatingly bogus (and therefore a mistake) for an ad to pretend to be some kind of news segment commenting on the process from the outside. After all, if the earlier material has indeed worked, and Bush's record really has become an issue, then the viewer doesn't need to be told. If you're not convinced that Bush's record is an issue by the time you hear the line, then it will sound like wishful thinking.

Like the epilogue at the end of a Steven Spielberg movie, it isn't necessary and it betrays a patronizing (and elitist) lack of confidence in the viewer's ability to get the message.

Steve Sandoz is a creative director with Wieden & Kennedy, the advertising agency responsible for, among others, Nike's "Mrs. Jones" ad campaign.

Does anyone at the Democratic National Committee or Republican National Committee ever watch television? Clearly not, because neither camp appears to have any understanding of how advertising works in the year 2000. Admittedly, this latest attempt by the DNC to fire a political spitball at George W. is less contrived and more effective than the RNC's recent anti-Gore ad ["Really"] featuring the voice of an actress berating Gore as carefully chosen clips appear on her TV set, but it's not exactly a great ad. Not even remotely so. Yes, it calls into question the effectiveness of George W. as a leader who can make good on his promises, but that presupposes that a viewer will actually sit there and watch this ad instead of sprinting to the kitchen or toilet the moment it comes on.

Come on, people, surely you can do better than this. A first-year ad student could do better than this. A 5-year-old with a video camera and a bunch of Pokimon toys could do better than this. This is not compelling television, no matter how you look at it. Either save your money until you have something that's going to demand my attention or spend more than 50 cents and five minutes producing your next ad. I'm not saying you should have the candidates dancing around to a techno soundtrack with a lot of quick cuts (although, admit it, that would be amusing), but at least make an ad that people will have to care about. Trust me, it ain't that tough.