Flanked by Robert Rubin and a shiny new economic plan, he promises more -- and more on top of that. 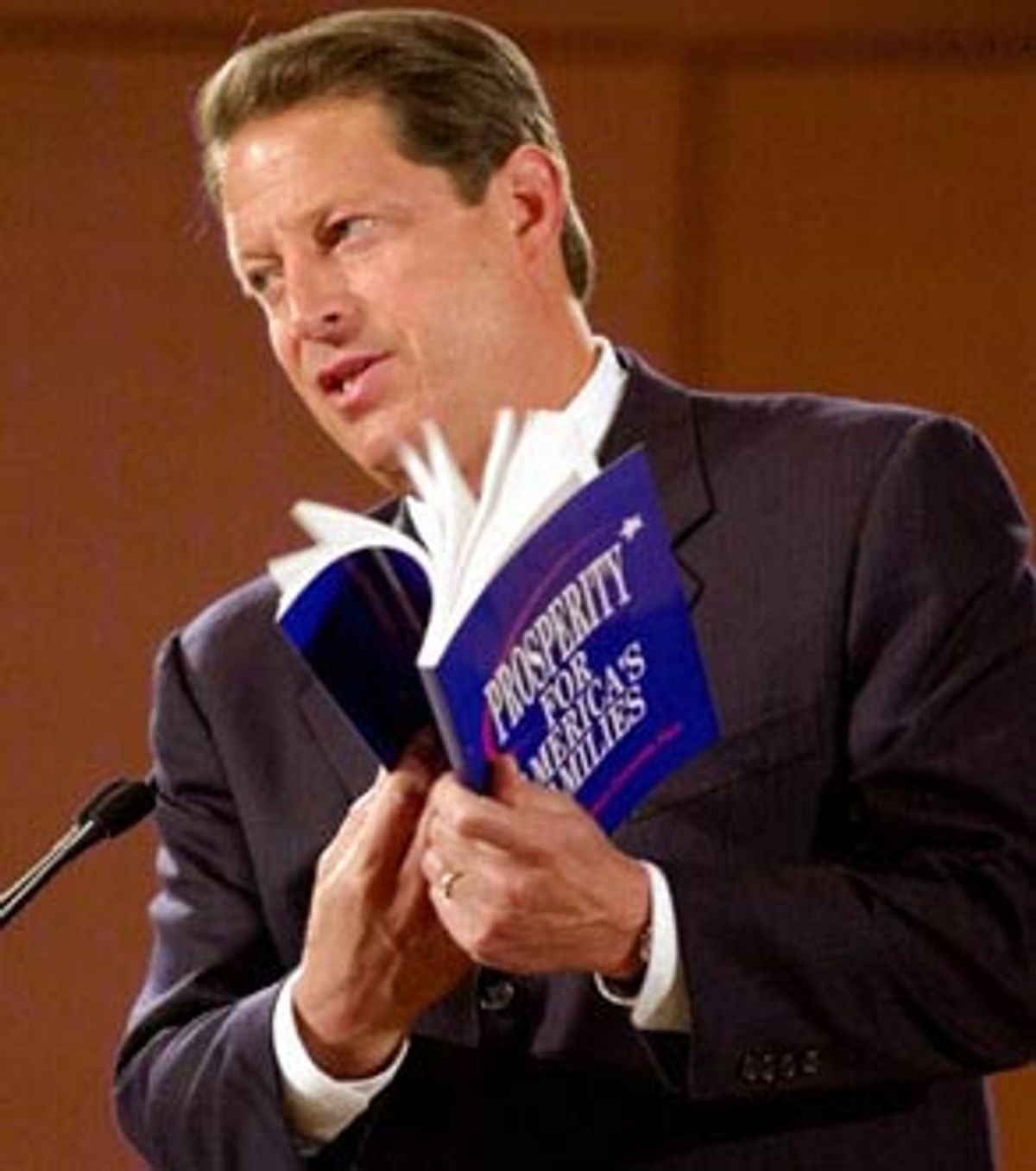 For months, Vice President Al Gore has been blasting Bachman-Turner Overdrive's cloying "You Ain't Seen Nothing Yet" as the intro to many of his campaign appearances, also using the song's title as his corny tag line.

On Wednesday, at a much-promoted speech at Cleveland State University -- with former Treasury Secretary Robert Rubin fastened to him like a lapel pin -- Gore tried to answer, in economic terms, the natural question raised by the song: Well, what is next? How can Gore promise an improvement over a time of unquestioned economic prosperity?

Shifting from the casually dressed, populist speed-freak mien that has marked his rally appearances lately to his more serious, banker-suited, statesmanlike, plodding demeanor, Gore laid out 10 goals of his economic plan -- ones lofty and hard for a Democratic audience not to applaud, however pie in the sky actually achieving them might prove to be.

"Let's lift Americans out of poverty so that within the next four years fewer than one in 10 Americans will live in poverty," Gore said. "Isn't that a worthy goal?"

The audience agreed that, yes, it was.

"Let's cut the wage gap between men and women," Gore went on. "In fact, let's cut it in half -- and then let's keep going until we achieve the ideal of an equal day's pay for an equal day's work."

The audience liked that, too.

And the goals continued: Gore wants to enable seven out of 10 Americans to own their own homes ("a new record high," he said). He wants to add 10 million "high-tech, high-skill jobs" to raise employment levels. He mentioned tax cuts for middle-class families, set goals to increase the proportion of high school graduates who go on to college from two-thirds to three-fourths, with a full half eventually graduating. And he pushed reducing the national debt "every single year -- until it is completely eliminated by the year 2012."

The other three goals are making Social Security and Medicare financially sound until the second half of the 21st century and the year 2030, respectively; doubling the number of families with savings in excess of $50,000; and raising family incomes by one-third.

Gore did not, however, mention ways to make Americans thinner and more attractive, with whiter whites and fresher breath.

Unlike, say, guess who?

Indeed, the secondary point of Gore's speech wasn't even to remind voters of the economic prosperity achieved during the Clinton-Gore administration (which began, in fairness, during the last few months of President Bush's tenure). It was that Texas Gov. George W. Bush's economic proposal -- specifically, his across-the-board tax cut, which gives a greater percentage of cuts to those in the lower and middle class, but 60 percent of the actual dollar amount to the richest 10 percent -- is "just wrong." And that Bush's "huge tax cut for the wealthy" would "wreck our good economy."

It's a fairly harsh attack that covers the bases: There's not only a moral imperative at stake with the Bush proposal but a fiscal one as well.

But regardless of Rubin's testimonial that the plan of "the other side" would put the economy "into deficit" -- as well as his personal guarantee that, in the conference rooms of the Clinton White House, Gore was "at the center" of every economic decision, "a strong force for doing what was right even when it was politically hard" -- Gore's proposal nonetheless had its GOP detractors.

A Bush campaign press release stated that "a new study released today by the Senate Budget Committee points out that Al Gore has made $3 trillion in promises but only has $2 trillion to spend after setting aside the Social Security surplus."

Trying again to make this an issue of Gore's personal trustworthiness, the Bush press release concluded that the study means Gore "will either have to raid the Social Security Trust Fund, raise taxes or fail to keep his promises -- any of which will call into question his credibility on fiscal matters."

And in Wilmington, Del., Bush running mate Dick Cheney -- whose personal fortune, as pointed out by the New York Times' Maureen Dowd, was multiplied by 17 times during the Clinton-Gore years -- announced that six Nobel laureates and 294 "leading economists" were backing the Bush plan in a USA Today ad.

Of course, the election won't come down to a battle of the economic all-stars. And again, Gore tried to subtly -- or as subtly as Gore is ever able to be, really -- drive home the point that not only does he have the fairer plan, but he has a bit more candle wattage than the Texas governor. Rubin referred to the need for a president who understands the complexities of the new economy, lauding Gore for offering a level of detail in his economic plan that no presidential candidate in his memory had ever tried to do. Gore held up a pretty blue book, "Prosperity for America's Families," not only "writ[ing] a new chapter" in history but "actually writing 12 new chapters."

The 191-page book (including endnotes) will probably be read only by Bush opposition researchers; still, Gore's implicit message was both that he's a tad better prepared for the job and that he's laying out the details of his plan in a way that Bush hasn't.

Bush's recent insistence on having the presidential debates viewed by as small an audience as possible (unlike Gore, he wants them to be 60, instead of 90, minutes and on one network at a time, not all of them) hasn't helped him combat this impression.

Interestingly, and with alarming disingenuousness, Bush even unveiled a campaign ad today that slams Gore for not abiding by his acceptance of debates on CNN's "Larry King Live" and NBC's "Meet the Press With Tim Russert." The ad is factual in its details -- Gore did, in fact, accept Russert's and King's invitations unconditionally, even cockily -- but totally outrageous in its general assertion that Bush wants to debate and Gore is ducking the challenge.

If he could, Bush would probably insist that the debates be broadcast at 3:30 a.m. on the WB network.

Gore, meanwhile, seems content to let the public sort out who is right on the debates. Now he's focusing on establishing his own gravitas, while implicitly pointing out his opponent's alleged lack thereof.

The book conjured up memories of the 1992 Clinton-Gore campaign's novella "Putting People First," even more so when Gore told the audience to "read my plan" -- a line he pinched from Clinton, who, while debating Bush's daddy on Oct. 19, 1992, slammed the then president by saying, "I am not going to tell you, 'Read my lips' ... Read my plan."

Cleveland State University, where Gore delivered his speech, is home to what school administrators laud as a "brainy" wrestling team. The singlet-clad Vikings placed first academically among all public-institution wrestling teams, and seventh academically among both public and private college wrestling teams in the U.S. -- one place ahead of Gore's alma mater, Harvard. So maybe it was an appropriate setting for Gore to engage in some brainy wrestling of his own. Whether he will be able to accomplish even half of his wish list is almost beside the point.