I tutor 3-year-olds to crush the competition. 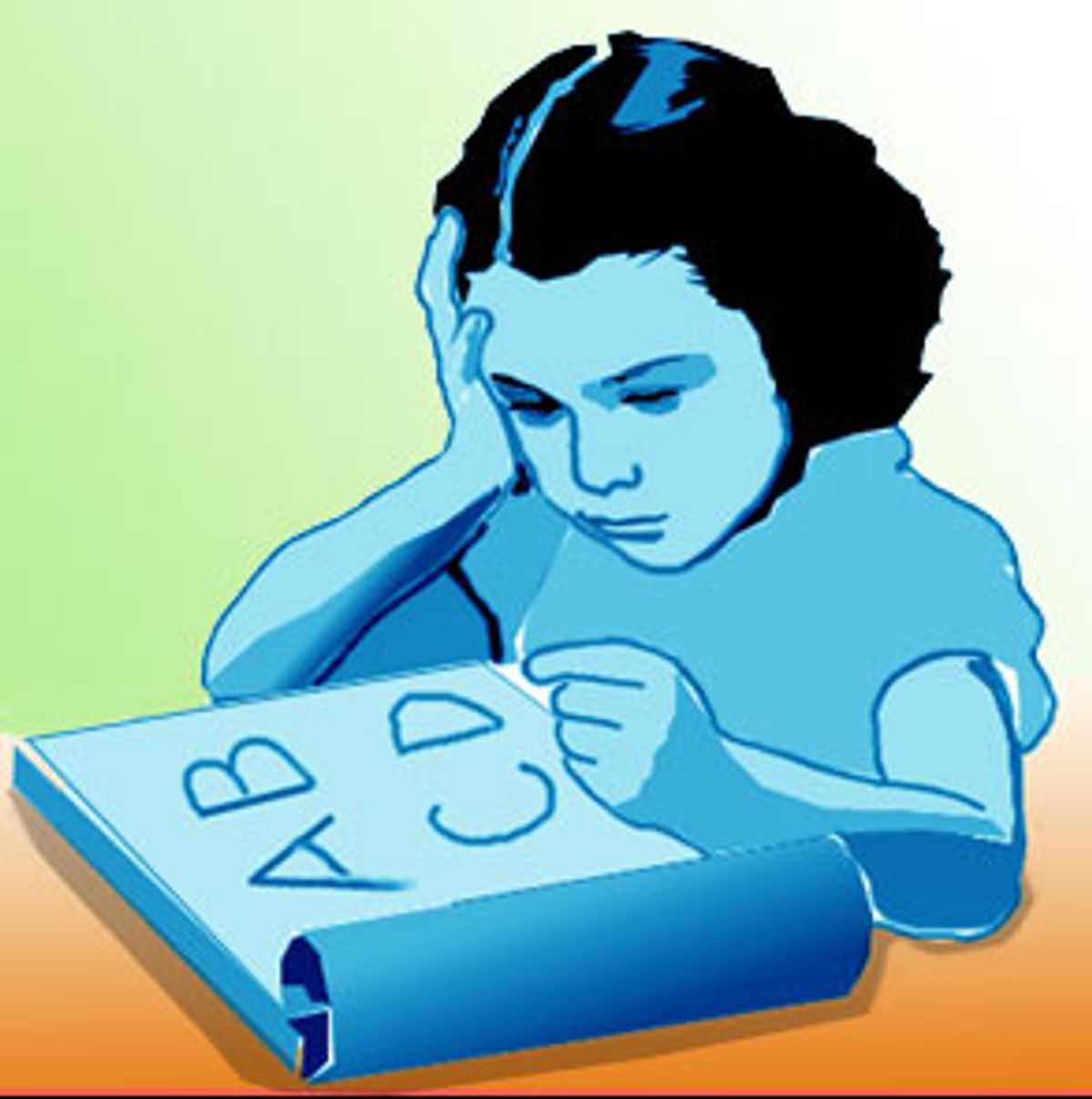 When I look through photographs of me when I was 5, I see a blissful kid running through sprinklers, going for wheelbarrow rides and playing red light, green light with the neighbors. Kindergarten was somewhere in the scheme of things, but it was just a more organized form of play, with milk and cookies included.

I'm sure that anyone over the age of 30 has similar memories of his or her youth. But many of my fellow baby boomers, especially ones in places like Beverly Hills, Calif., and the Upper East Side of New York, choose not to offer the same carefree life to their own children. Instead, they pre-program their babies to become committed, serious, hypereducated individuals. By the age of 5, these kids have to say goodbye to Barney. For them, playtime is over.

I know this -- intimately -- because I am a personal home tutor in the Los Angeles area, serving clients in Brentwood and Beverly Hills. I work with children of all ages, but primarily 3-to-5-year-olds whose parents want them prepared to test into prestigious private schools. At an age when the word "competition" should not even be in their vocabulary, these children are forced to go in front of a panel of school officials and perform tasks such as putting blocks into the correct holes and writing the alphabet and numbers.

This may not seem like such a difficult assignment, but the performance of these kids during that moment of testing will determine whether they get into a chosen school. Children are moody, their behavior is unpredictable, and if they experience a temporary mind blank on the day of the test, their parents believe that their baby scholars will have to say bye-bye to the Ivy League. The parents will do almost anything to avoid this fate.

That's where I come in.

Every mother and father of a 4-year-old knows that their child has developed some independence and has mastered the concept of the word "no." So when it comes to dragging their kid away from a favorite Disney video to teach them how to write their name, the child throwing a tantrum all the while, it helps to make it someone else's fault. Children are smart. They know the difference between Mommy and teacher, and to them, these differences are black and white. The parents don't want to be the bad guys, so they hire me to drill their kids for private school.

The first time I accepted an assignment as a tutor for a 3-year-old, I couldn't imagine what the parent expected from me. I was used to tutoring older children who needed help with homework and projects. What could I teach a 3-year-old that "Sesame Street" couldn't? Hiring someone to teach a child the alphabet seemed absolutely ludicrous.

The moment I arrived, the mother handed me a list of what was expected of a child entering kindergarten at several of the private schools in the Los Angeles area. I was bewildered, even though we had two years to prepare. The first few times I met with the child, she couldn't stay still long enough for me to tell her my name. Finally, after several weeks, she would sit for me and we would recite our ABCs. As I was struggling and slowly losing my patience, the mother was at the salon getting a manicure or her hair dyed.

It usually takes a session or two for a child to trust me. I try to make our time together as fun as possible, but the kids eventually catch on. At first, I become their best friend, their playmate, and they cannot wait until our next meeting. Then, when we have to get serious, I become their adversary. They realize I am not there to play with them. They understand there is an ulterior motive. I can usually tell when we have reached this stage because they scream and hide when they see me coming, yelling, "No, Mommy, no!" This is when the fun stops and the work begins. This is also when I have to deal more closely with the parents.

My clients are typically successful professionals -- doctors, lawyers and studio executives -- who begin networking just after the birth of their children, planning the children's academic future as though they were conducting a business deal. They enroll them in notable preschools and fill up their schedules with as many extracurricular activities as time allows. These children take computer classes, early reading classes, early math -- all beginning at age 3 -- in order to crush the competition when it comes time for kindergarten.

The parents also schmooze with the parents of students already enrolled in the schools of their choice, and sometimes they even try to befriend the faculty. They will do whatever it takes to make the proper connections. It's an interesting process that lacks sincerity and rarely leads to friendship. Mostly these bonds are formed around gossip sessions about other parents, proving, once again, that competition breeds contempt.

Just after the winter holidays, it is time for the children to be tested. Of course, all the parents want to cram in as many last-minute tutoring sessions as possible. Usually these sessions are more for the parent than for the child. I am overwhelmed with questions -- "How can I make sure Johnny will do this?" and "What if Sara doesn't do that?" I tell them to relax. After all the preparation, the child is either ready or not, and at worst, the family will simply have to wait one more year to apply. I try to calm the parents so their kids don't pick up on the tension surrounding their interviews. I advise them to tell their children to just go in and have fun. If the children think it is work, they may get tense and suffer from performance anxiety.

Some children crack under the pressure and won't even let go of their mother's hand, let alone draw shapes for a stranger. Instead of being supportive, some of the parents get angry, which only scares the child even more. A 5-year-old just doesn't understand that one 10-minute session may determine their fate and, most important, their parents' status in society.

Finally, the child is taken behind closed doors as the parents sit in the next room, swinging their feet and biting the skin around their nails. It is a big secret, what goes on in these interview rooms, and every parent wants to know what is being asked of the children. (The schools usually maintain discretion -- much to the parents' fury.)

When the torturous interview process is over, all that can be done is to sit and wait for the results, which arrive the last week in March. During that week, I am bombarded with phone calls from emotional parents. They are either ecstatic or shattered. They consider the results to be a personal triumph or a personal failure. Luckily, most 5-year-olds don't understand what it means to be rejected. At this point, justifiably, the results tend to hit the parents the hardest.

But the process doesn't stop there. Once these children are finally accepted into one of the preferred private schools, they have to work hard for the next six years, usually with the help of tutors such as me, only to repeat this entire process to get into secondary school. And believe me, 12-year-olds know what it means to be rejected, and they take it to heart. They have heard their whole lives that if they work very hard and keep up their grades, they will be able to get into the school of their (parents') choice.

There are times when I feel partly responsible for taking away my students' childhood. But this job truly has its exceptional moments, which temporarily erase my guilt and make it difficult for me to choose another profession. These children I work with are really wonderful -- good listeners, hard workers -- and they learn responsibility at a very early age. Eventually they begin to trust me and no longer dread my visits. They realize I am not the enemy and I am there to make their lives a little easier. Some even enjoy doing the work. There is nothing more amazing then seeing a child's face light up when he or she works hard and has personal pride in the results. This is why I continue to be part of this harsh process -- I feel like the good guy in the midst of all this madness.

I understand that these parents want what they believe is best for their children. Most of them are highly educated or hardworking people, and they want their children to have the same opportunities, sometimes better opportunities, than they were given while growing up. But they are looking at this situation with tunnel vision. These children are being brought up to believe that they have to get into the best schools and get the best grades and have the best tutors in order to have a successful future. This level of expectation contaminates their personal lives as well. These kids carry cellphones and beepers, wear designer clothes and own enough Nintendo and computer games to fill a warehouse.

Not one of the children I tutor likes to read -- not one. They will only do so upon demand. They watch TV, surf the Internet and use electronic devices to stimulate or relax their minds. When they ask me, "What's the point?" I honestly don't have a truthful answer to give them. I would love to tell them to go outside and play.

So my work as a tutor is to make learning fun. It's that simple -- and that's why I chose this profession. The incredible children I work with make this work both satisfying and painful. I love being with them, I delight in their successes, but I cannot stand the fact that my students have no time to be children. I hope someone, at some point, will teach them how to play.

Theresa Heim is a private tutor in Los Angeles and a MFA student at Antioch University.