Indigenous Ecuadorians want Texaco to answer for alleged environmental recklessness in the Amazon -- and 30,000 of them are fighting the oil giant in U.S. District Court. 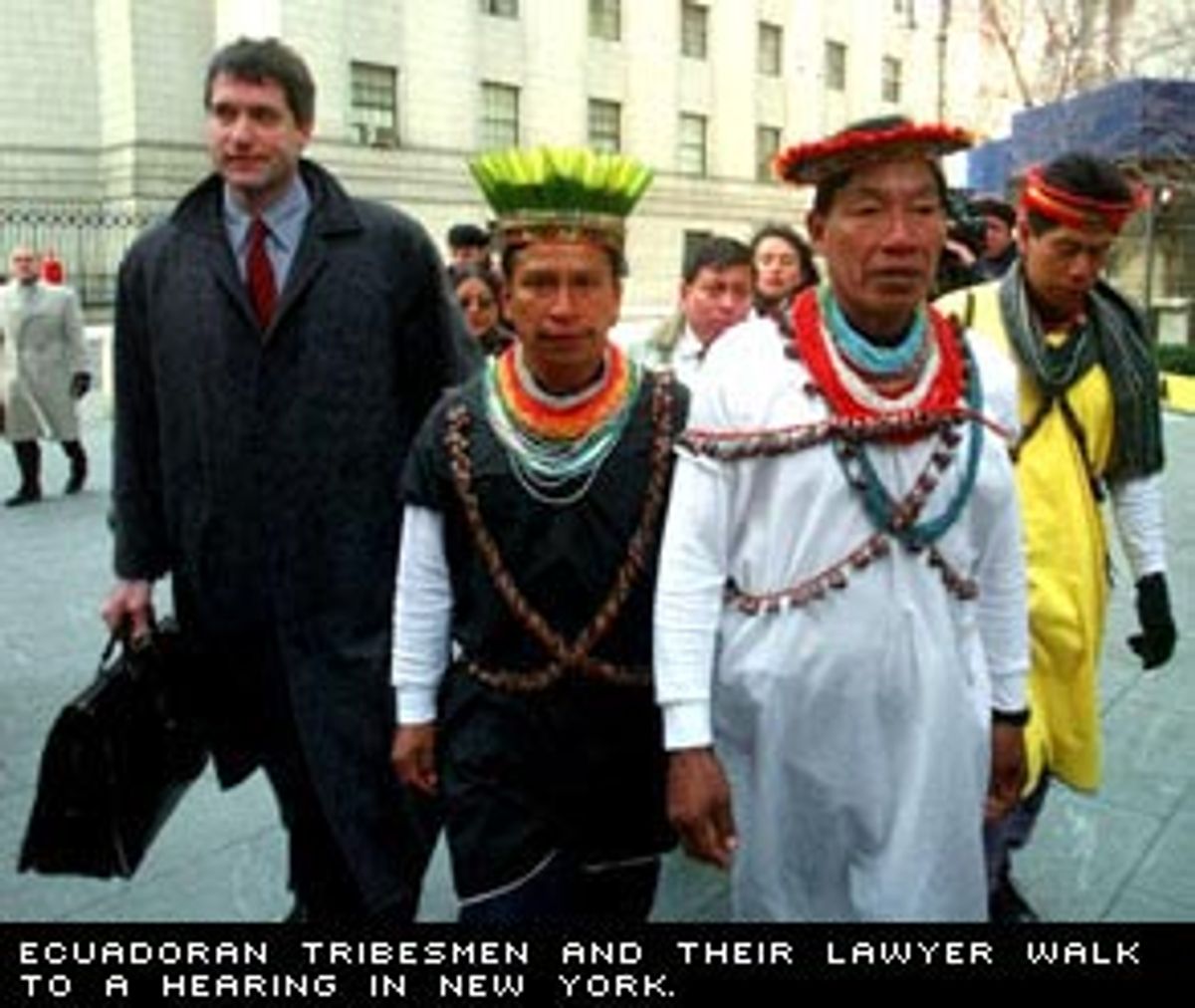 Over the past seven years a precedent-setting legal case over multinational corporate responsibility has been winding its way through the U.S. legal system. A group of indigenous communities in Ecuador is suing Texaco for $1.5 billion in an environmental lawsuit filed in U.S. District Court in New York.

The suit, on behalf of 30,000 Ecuadorians, claims that when Texaco's oil drilling concession in the Ecuadorean Amazon expired in 1990, after 26 years of operations, the company left more than 600 open-pit toxic waste sites in the region, causing local cancer rates to rise.

The plaintiffs want Texaco to pay healthcare costs and to clean up the remaining waste sites. But according to the company, "During its years of operations, Texaco Petroleum consistently complied with the laws of Ecuador and international petroleum industry environmental standards." In a recent development, the plaintiffs accused the presiding judge of conflict of interest after he attended a seminar held by a foundation with financial ties to Texaco. They have requested that the judge recuse himself from the case.

Whatever the outcome of the lawsuit, it marks the first time that an indigenous community has filed charges against a multinational oil corporation in the company's country of origin, instead of the country where the alleged violations took place. Texaco continues to insist that the case should be heard in Ecuador.

The Texaco lawsuit is a nightmare for oil companies around the globe that, like other resource-seekers before them, launch exploration projects in undeveloped and virgin lands, often inhabited by indigenous communities. Since colonial times, conflict has arisen between foreign companies, whose intent is to profit from untapped resources, and communities whose way of life and culture are closely tied to the preservation of their environment.

Recent conflicts between oil corporations and indigenous communities across the globe include Royal Dutch/Shell in Nigeria, Talisman Energy in the Sudan and British Petroleum and Occidental Petroleum in Colombia. In each case, the communities are fighting vociferously for their rights with varying effect.

"It's particularly difficult dealing with indigenous peoples," says Ged Davis, vice president of Shell's Global Business Environment Group, "because they have such a deep reverence for their natural environment that is at odds with those who want access to that environment."

In 1997, under new leadership and after years of close ties to military dictatorships that routinely violated the human rights of indigenous people in the Niger Delta, Shell reevaluated its operating policies. It introduced corporate strategies designed to foster local community development. According to Shell's 1999 Annual Report, these strategies include "simple cost-effective hand-operated water pumps, improved fish smoking, integrated fish and poultry farming and a micro-credit scheme for agricultural development."

However, a major test of Shell's new policy of social responsibility will be how it handles protests by members of the Ogoni community against Shell's planned reentry into lands it abandoned seven years ago amid violent demonstrations.

Shell has recently withdrawn from its partnership with Occidental Petroleum (Oxy) in Colombia, following that company's dispute with the U'wa nation, an indigenous group that claims ownership of lands where Oxy has discovered a large oil deposit.

British Petroleum (BP), which is also working in Colombia, has instituted several policy changes after being severely criticized by human rights groups. The company agreed to pay the government for protection of its facilities instead of directly paying Colombian security forces that had been accused of committing human rights violations. BP then went one step further by allowing an auditing mechanism to monitor the flow of funds and the activities of the military units providing security to its facilities.

Many companies like Shell and BP are now seeking more responsible ways to do business, in part because socially responsible behavior can also be financially sound policy. "There is an emergence of a new thinking -- merging market interests with principles," says Davis of Shell.

In contrast to the policy adjustments implemented by Shell, Occidental Petroleum continues to ignore the trend to become more transparent and socially responsible, according to its critics. Like BP, Oxy amended its agreement regarding the method of payment for protection provided by Colombian security forces. But it eschewed human rights clauses and has engaged in an ongoing battle with the U'wa, calling for the help of the Colombian armed forces.

The Colombian army has obliged by crushing U'wa protests against oil drilling. In one operation, according to press reports, three children drowned after the army violently broke up a demonstration. In testimony before the U.S. Congress, Oxy vice president Lawrence P. Meriage charged that the U'wa campaign against Oxy is being orchestrated by "the guerrillas and U.S.-based radical NGOs."

Oxy recently received permission to begin drilling from the Colombian courts, but the U'wa claim that Oxy ignored a clause in the 1991 Colombian constitution that requires a company to negotiate in good faith with the indigenous community that will be affected by its activities. They have appealed the case to Colombia's Constitutional Court, where it is pending. Meanwhile, Oxy is continuing with its plans to begin drilling this month.

Indeed, the stakes are high for the Colombian government and Oxy. According to government estimates, the U'wa ancestral lands contain an untapped pool of up to 1.3 billion barrels of oil. The U'wa lament that "the oil drilling will take blood from the heart of the world" may not be understood by the courts.

As Davis says, "It seems to be a trend. It's like recent developments in human rights where violations committed in one country are now judged in other countries."

Given that the laws in developed nations are often stricter and almost always more enforceable than those in the developing world, this significant step could give indigenous communities an advantage.

Garry Leech, an independent journalist specializing in Latin American issues, is the publisher of Colombia Report, a non-profit e-zine that focuses on U.S. foreign policy in Colombia.