He put a spell on them

Screamin' Jay Hawkins left the world asking only that his children meet -- all 57 of them. 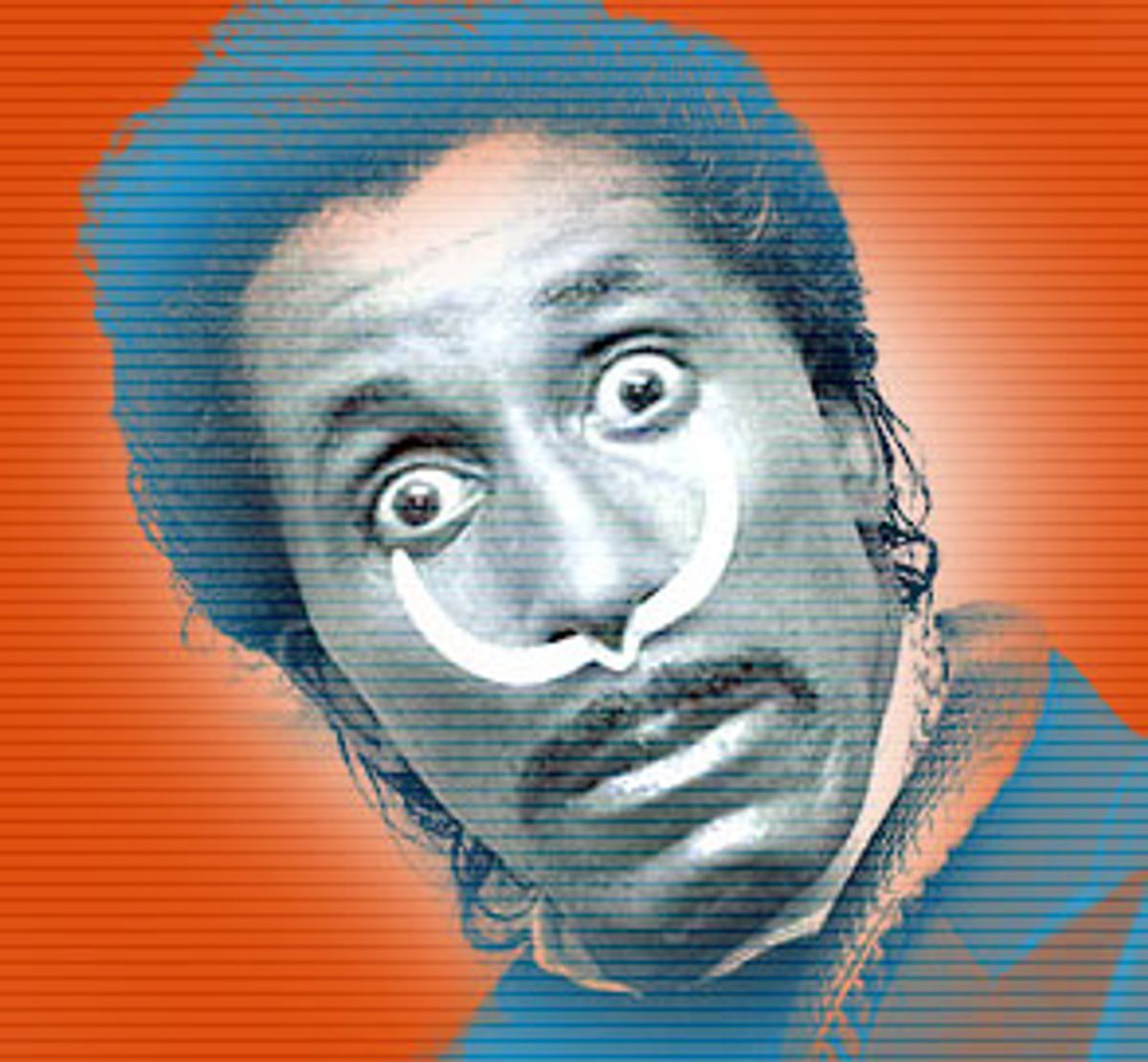 When Screamin' Jay Hawkins performed onstage, he'd emerge from a coffin, toss around fake tarantulas and rubber snakes and wear a bone clipped to his nose. This was in the 1950s -- and it wasn't uncommon for audiences to leave bewildered.

Kooky as his stage presence could be, nothing was as odd as his personal life. When Hawkins died at 70 in February after an aneurysm, he left with a dying wish: He wanted all of his children to meet.

But here's the problem: There are at least 57 of them.

"We believe he had at least 57 children, but it's probably more," said Maral Nigolian, his biographer. "We have a videotape with him saying he had 75 kids."

Nigolian, an investment banker by day, has put the biography on hold to become the official Hawkins uniter. She says she has tracked down and verified 33 of the performer's children and hopes to find the remaining ones by Nov. 3, when the kids are to meet at the Rock and Roll Hall of Fame and Museum in Hawkins' native Cleveland.

Nigolian typically confirms the children using birth certificates. In some cases, they couldn't produce the certificates, so she used verbal and anecdotal evidence. It's not exactly scientific, but neither was Hawkins.

The verification process is slow going: Nigolian uses a Web site to ask potential Hawkins children to submit information about themselves. She has received more than 1,200 submissions.

"About half of them are obvious jokes," Nigolian said. "How I look at it is that Screamin' Jay had a big sense of humor, so it's OK."

Nigolian was drawn to Hawkins in the same way as many of his fans were. She heard his most famous song, "I Put a Spell on You" from 1956, and became enthralled with his odd ways. The song was written as a ballad, but after a night of drinking, Hawkins added screams, yells and groans. While the song was strangely appealing to some, several radio stations banned it because, they said, it sounded cannibalistic.

Saying that Hawkins' music was different is an understatement. He was known for nutty, demented antics. He often burned himself onstage with exploding fuse boxes. His backup musicians changed frequently, though he had a mainstay named Henry -- a cigarette-smoking, flaming skull.

Hawkins never sold a lot of records, but his stage show received rave reviews. In more recent years, he moved into film and had parts in "Mystery Train" and "A Rage in Harlem."

"He was the person that started the macabre genre," Nigolian said. "In a time when guys in suits would do things like shift to the left and shift to the right, he wore capes and plucked the extremes. Half of the audience didn't know if he was screaming in terror or screaming in joy."

Hawkins, whose full first name was Jalacy, was the precursor to somber, dark artists like Alice Cooper, Marilyn Manson, Ozzy Osbourne and Iggy Pop. Yet Hawkins often is overlooked.

Apparently, strangeness follows Hawkins, even after his death. From all over the globe, his kids have been surfacing. But among all his numerous offspring, none attended his funeral in Paris.

Some of his children sound as eccentric as he. The three oldest children -- Leann, Irene and Jalacy Hawkins Jr. -- are 49, 48 and 47 and live in the Cleveland area. Leann is a mail carrier and a cabaret singer. Irene drives an ambulance during the graveyard shift and is a puppeteer. Jalacy spent 30 years in the Army.

"He used to tease me and tell me I was the female Screamin' Jay," Irene said. "He told me, 'I got other kids, but none are more like me than you.' Once he sent me an album with him on the back holding a shotgun in his hands. I used the picture to make a puppet of him."

Sporting a cape and jewels, Irene's life-size puppet of Screamin' Jay is made of pillows, drapes and clothes. Irene has used it in puppet shows in Cleveland and on local TV. She has other puppets, too, including one called Danny Boy, which smokes cigars and cigarettes.

"I gave him a windpipe," she said. "I attached a bicycle horn to the chest, and it blows smoke. My father loved that one. He said he had only heard of two puppeteers, Charlie somebody and another guy who was dead, and he never saw any puppets walk and talk [and smoke]."

Hawkins had six wives. Leann, Irene and Jalacy came from the first wife, Anna Mae Vernon, and they all knew Screamin' Jay well. Some of the other 30 children whom Nigolian has verified never met their dad.

Melissa Ahuna, a 32-year-old hula dancer and nurse in Hawaii, knew him. But she wasn't raised by him.

"I don't know my black side," Ahuna said. "My mother was Hawaiian, Chinese and Portuguese, and I grew up ethnically challenged. Hawaii is a melting pot, but a lot of people didn't see me as Hawaiian. They saw me as black, and the black community saw me as Hawaiian."

As far as wanting to meet her half-brothers and half-sisters, Ahuna said, "I have a nappy head of hair, and I've never known what to do with it. When I meet my sisters, maybe they can do my hair."

Screamin' Jay never lived in Hawaii, but he kept in contact with Ahuna and her mom, Mary Lou. Hawkins often gave Ahuna gifts, including her first boogie board, which was bright pink, and her first radio, which had his name engraved on it.

Ahuna had a brother, who was put up for adoption at birth, and she's hoping he'll step forward for the reunion.

Why care about their father's 56 other kids? The children who knew him generally cite curiosity and closure as their reasons. Of course, the attention probably doesn't hurt, either. Since February, several media outlets have picked up on the story, including Harper's magazine, the Chicago Tribune and the Associated Press.

For the children who never met Screamin' Jay, though, there are other issues.

Colette Howard, 47, is a government worker who lives in Cincinnati. She says she would like to meet the other children because she wants to learn about a side of herself she never knew.

"When I was 10 years old, my mother sat me down and put on a talk show -- I think it was Merv Griffin," Howard said. "She said, 'I want you to watch this.' And it was this wild performance. When it was done, my mom said, 'That's your father.' I couldn't believe it."

The facts match for Howard, who was born in Cleveland and moved to Cincinnati when she was 6. Her face matches, too: Screamin' Jay had a big, er, distinctive nose. Four children, including Howard and Irene Hawkins, recently met in Chicago. While each was skeptical at first, the resemblances were undeniable.

"We found out we had a lot of the same habits," Howard said. "I like to gamble. I like to play bingo quite a bit, and so did they."

Howard and Irene each have asthma as well, and the four who met in Chicago have obvious artistic sides. Howard, for example, has written plays that have been performed in Cincinnati.

Screamin' Jay left behind a modest estate, the rights to his music considered the most valuable part. Exactly who will get what hasn't been determined: His will places the estate in the hands of his fifth ex-wife, Mary Lou Ahuna, which has his sixth wife, a 31-year-old named Monique Hawkins, outraged. The two are in the midst a legal battle.

None of the children has made claims to the estate. Nor has any of them voiced resentment about the other children or their prolific dad.

Screamin' Jay was loved by thousands, and he loved many of them back -- literally.

Joe Stevens is a writer living in Southern California.