What's the difference between the Bush and Gore health plans? 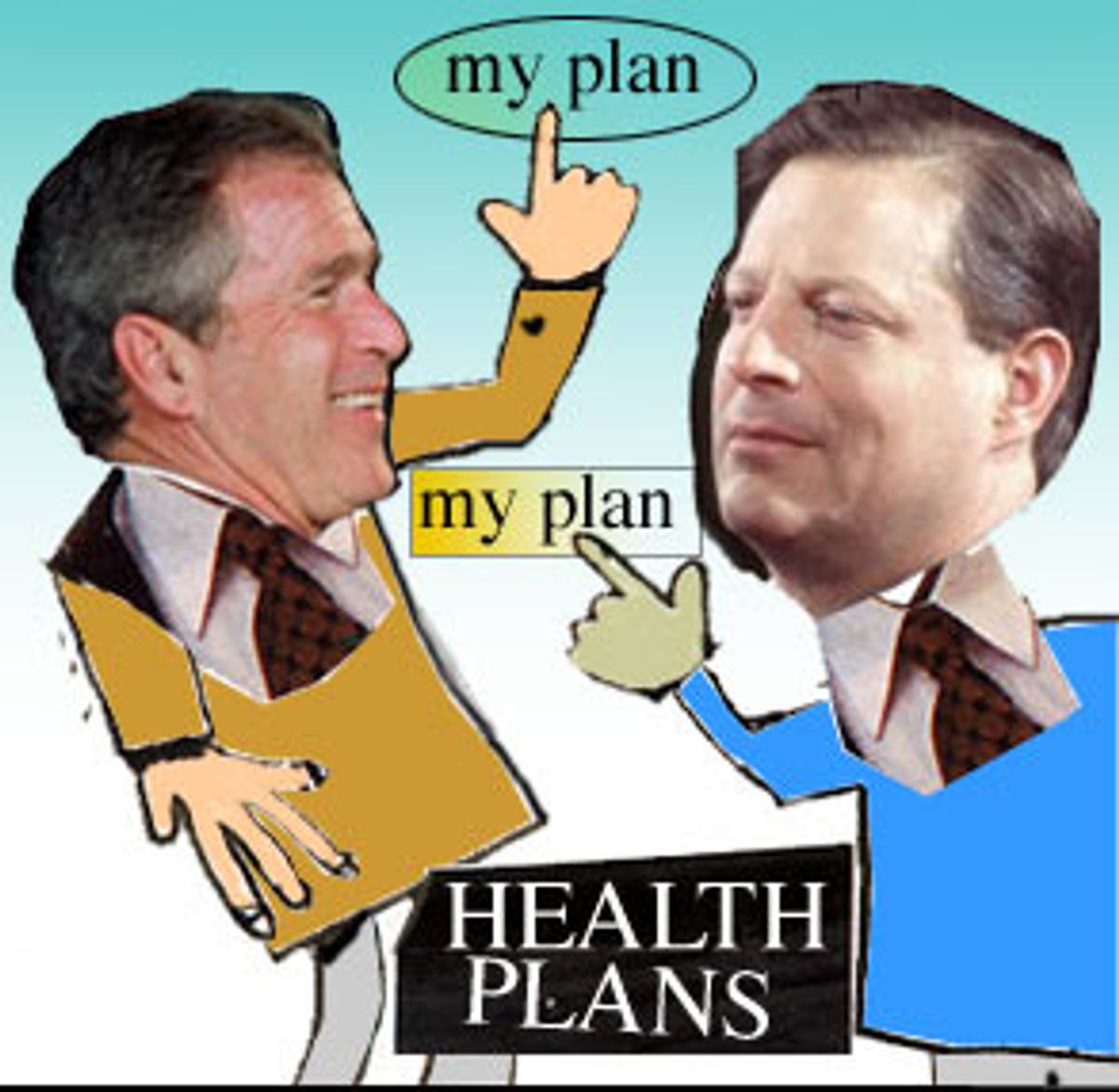 In laying out what would be the most radical reform of the Medicare program in its 35-year history, Texas Gov. George W. Bush has offered a bold alternative to the plan offered by Democrat Al Gore. But Bush's plan is difficult to explain and may be difficult to sell, and it is fraught with political risks.

Bush not only wants to provide senior citizens a drug benefit; he also wants to change the basic structure of Medicare by having the federal program compete with a smorgasbord of new government-subsidized HMOs and insurance plans.

Bush's free-market proposal, which closely tracks a bill favored by Republicans in Congress, is sure to appeal to the party faithful. It attacks what Republicans see as Medicare's "big government," "one-size-fits-all" approach to healthcare. Yet it is not at all clear that Medicare's 39 million elderly and disabled beneficiaries are anywhere near as disillusioned with the program as Bush and more conservative members of his party who have long viewed Medicare as the prologue to socialized medicine.

The bigger problem with Bush's proposal, and the reason it's so politically risky, is that it provides no guarantee that all seniors would get the drug benefit he says he wants to give them.

Bush's plan allows seniors to stay within the existing Medicare system -- which provides only in-hospital drug benefits -- if they choose to. But Bush can't tell those who opt for one of the new insurance plans how much coverage they'll get or how much they'll have to pay for it because those new drug plans don't yet exist. Furthermore, it's not at all clear that the insurance industry would find drug insurance a profitable venture. Many private insurers have already indicated that drug coverage programs would be uneconomical because the only people who would want to buy them would be people with large prescription bills.

In short, the Bush proposal risks creating substantial uncertainty among seniors who are looking for rock-solid guarantees that their health needs, and particularly their prescription drug costs, will be provided for. Whether Bush can sell a plan which remains something of a pig in a poke remains to be seen.

Gore's program, which he has been heavily promoting for the past month, is relatively simple and straightforward by comparison: provide all seniors a new, heavily subsidized entitlement, a drug benefit under an expanded Medicare program.

During each of the past five years the cost of prescription medications has risen anywhere from 10 to 14 percent, and prices are projected to rise another 10 percent annually until 2008. About a third of Medicare patients have no drug coverage at all, and many insurance plans for those who are covered provide only limited benefits.

Both Gore and Bush would provide free drug coverage for the poorest Medicare recipients, individuals making less than $11,300 a year. Those with higher incomes would have to pay half their premiums under Gore but 75 percent under Bush. It is that provision that leads Gore to charge that Bush "leaves millions of seniors without any prescription drug coverage."

Kenneth Thorpe, a professor of health policy at Emory University estimates that nearly all of the 11.7 million Medicare recipients who currently have no drug coverage would enroll in the Gore plan whereas only 3.8 million would choose to enroll in the Bush plan. The lower participation in Bush's plan is attributable to the relatively small 25 percent federal premium coverage.

Both Gore and Bush would also provide what is known as "catastrophic" coverage, paying for all prescription drug costs once they reach a certain threshold. But for Bush an individual would have to spend $6,000 a year out of pocket before the government would take over, while Gore would start picking up the tab once expenses rose above $4,000 in a single year. On this provision Thorpe projects that Bush's proposal would help only about 300,000 Medicare recipients while Gore's would help 2.7 million.

What would seniors have to spend for premiums under Bush's voluntary drug benefit plan? This largely depends on the private insurance companies. His own lack of precision hasn't stopped Bush from running down Gore's premium proposal, which Bush says would require seniors to pay more in annual fees than they receive in benefits. Gore would require seniors to pay $25 a month starting in 2002, but the amount would rise to more than $50 a month by 2009. Similarly, Gore specifies that the government would pay half of a senior's annual drug bill ($1,000 of $2,000 in 2002, rising to $2,500 out of $5,000 in 2008), while the amount of this so-called co-payment under Bush's plan is left unstated.

While the Gore proposal would not take effect until 2002, assuming it were to win approval in Congress, Bush proposes sending $48 billion to the states starting as early as next year to help pay for prescription drugs for the poorest seniors and those with particularly large prescription bills. This interim measure is designed to allow states to get a head start on addressing the problem while Congress fashions a comprehensive national program to take effect in 2004. Fourteen states currently have some form of prescription drug assistance for the elderly (though Texas is not among them). But the coverage of state programs is generally quite limited. And it is not at all clear what kind of coverage they would get with Bush's $48 billion "Immediate Helping Hand" program.

Fearing it could lead to government-mandated pricing, the nation's leading drug manufacturers have sharply criticized the Gore plan. And indeed the Gore plan would give the federal government enormous bargaining leverage because they would be negotiating prices on behalf of literally millions of consumers. Of course, the large HMOs and hospital chains already exert considerable leverage of their own in this regard, and that leverage would almost certainly increase under Bush's plan as well. Nevertheless, from the drug industry's point of view, the Gore plan is clearly more threatening.

While in the coming weeks we'll surely be hearing all about how these two plans differ, neither addresses the long-term issues of putting Medicare on a more sound financial footing. Over the next 30 years, the number of Americans covered by the program is expected to double, while the number of those paying into the program declines.

Given the importance of the senior vote in the upcoming election and the volatility of the drug price issue, it is not at all clear why Bush waited as long as he did to come forward with a proposal. Until this week his vague commitment to reform Medicare and provide seniors with a drug benefit left him vulnerable to a steady stream of attacks by Gore. Now he has proposed a drug plan that is in many ways less generous than one already approved by congressional Republicans. Does he really think this will help him get the senior vote?