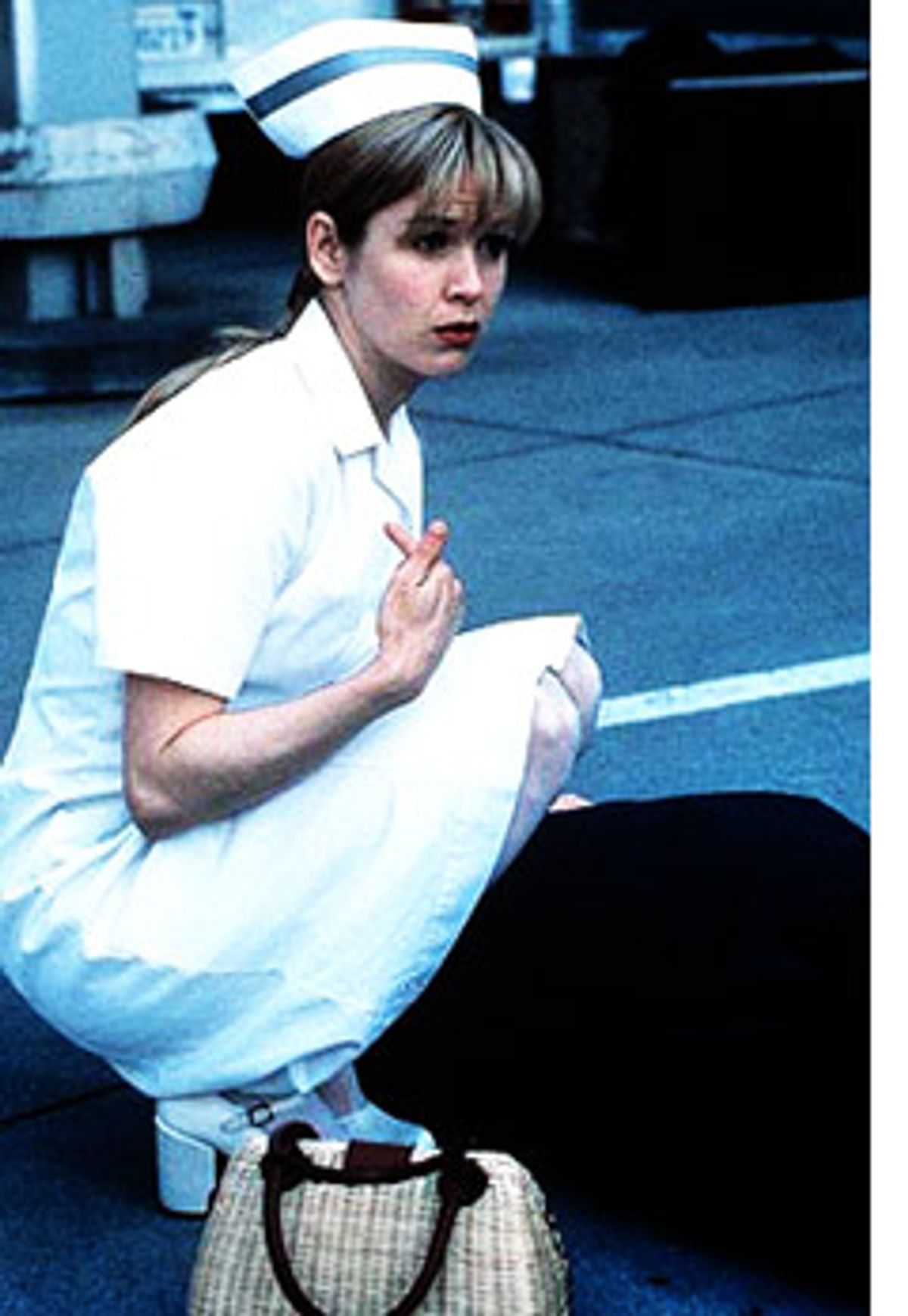 If bile were helium, Neil LaBute would be orbiting Saturn by now. It may be premature to say of a director only three films into his career (and while adolescent nihilists like Todd Solondz and Mary Harron are running around), but the movies have rarely offered a punier, more contemptuous view of human nature than the one expressed in LaBute's films. There isn't a moment in any of them where LaBute allows compassion to overcome his coldly detached observation, or where his characters, given the chance to show kindness, don't instead elect to act on their worst, most self-serving impulses.

LaBute's new film, "Nurse Betty," is the first in which he has worked from someone else's screenplay (the movie was written by John Richards and James Flamberg, from a story by Richards). It isn't the maddeningly minimalist affair that "In the Company of Men" and "Your Friends and Neighbors" were, with their secondhand Mamet-isms and doggedly stationary camera setups. Partly a road movie, the film's plot provides for some movement (though LaBute's pacing is still static). Had it been directed by someone else, Richards and Flamberg's screenplay might have achieved the sweetness it hints at. But in the midst of a black comedy of wish-fulfillment, LaBute's nastiness is even more unpleasant. In terms of the taste it leaves behind, the difference between LaBute's first two films and "Nurse Betty" is the difference between eating a bucket of bad clams and coming upon them deliberately placed in a seafood dinner.

Betty Sizemore (Renée Zellweger) is a waitress in a Kansas diner who dreams of becoming a nurse, dreams inspired by her favorite soap, "A Reason to Love," and particularly its doctor-hero, played by actor George McCord (Greg Kinnear). She gets more pleasure from the show than she does from her slob of a husband, Del (Aaron Eckhart), a used-car dealer with an ape-drape hairdo who can barely bother with Betty between diddling his secretary and diddling his partners in various illegal schemes. It's the latter screwing that does him in when two hit men, Morgan Freeman's Charlie and Chris Rock's Wesley, come to extract payback. Hiding in the den with tapes of her beloved soap, Betty witnesses the whole bloody scene and takes off for California, suddenly convinced that she's a nurse, the show is reality and that its star is her long-lost fiancée.

Betty, in shock over witnessing Del's murder, is meant to have suffered a breakdown and retreated into fantasy. But that's not how the movie plays. When Betty enters into her fantasy state, LaBute's direction is so indistinct that we can't quite be sure she wasn't this deluded all along. She might as well be. LaBute presents Betty as a specimen of boobus Americanus, one of the idiot masses who obsess over soap operas. To LaBute, that's the same thing as delusion.

It shouldn't be surprising that LaBute has no sympathy for the trashy appeal of pop culture. That was obvious from the sterile aestheticism of his previous work. "Nurse Betty" has more of a sense of color than his previous films, but LaBute and his cinematographer, Jean-Yves Escoffier, work overtime to make the middle-class homes and apartments look as drab and cheesily furnished as possible. It's the classic snob tactic of making bad taste equal idiocy.

The joke of the screenplay is supposed to be that everyone, not just Betty, exists in their own fantasy worlds. Charlie and Wesley set out after Betty because they think she's absconded with the swag they were sent to recover from Del, but it's not long before Charlie has fallen in love with his fantasy of Betty as a vision of cleanliness and goodness in his corrupt, violent world. To the soap-opera star George McCord, Betty, who speaks to him as if he were the character he plays, seems like an actress angling for a part on the show, one so adept at improvisation that she never breaks character.

Richards and Flamberg's screenplay seems meant to play as the cockeyed story of an innocent whose crazy belief in a fantasy world draws everyone around her into its spell. But LaBute has turned the screenplay into an attack on a culture of suckers susceptible to sentimental mush. And guess what rules that culture? Yep, TV. Isn't LaBute ashamed to recycle that hackneyed idea? Does he even watch TV, which frequently offers better writing and acting than you see in the movies? Farce only seems to interest LaBute for the sake of making his sour points about how scummy people are. The intermittently horrific sequences that punctuate the movie play as if LaBute were bored and needed to goose himself. He even treats us to a shot of Del being scalped before he's murdered (which we don't need to see for the shock of his death to register on Betty).

Even on the level of farce, with its convenient coincidences, "Nurse Betty" doesn't make sense. It's so patently clear that Betty is deluded that there's no way anyone could fail to spot it. And it's characteristic of LaBute that when George finally does recognize that Betty isn't quite all there, he treats her in the cruelest possible manner. With her apple cheeks, scrunched up eyes and big smile, Zellweger has possibly the most open face in the movies right now. In "Nurse Betty" she plays Justine to LaBute's Sade. He can't resist scoring points off of anyone who appears that sweet and trusting. Watching Zellweger used this way is the most unpleasant aspect of the movie, as if she's being made to pay for the things that make her appealing in the first place. Something similar happens to Freeman's Charlie as someone who wants to feel clean after being dirty for so long. Freeman brings great dignity to his final scene with Zellweger, but it's expended in the use of LaBute's paltry demonstration that people are saps. It seems a blessing that the talented supporting cast, which includes Crispin Glover, Sheila Kelly and Kathleen Wilhoite, scarcely have roles at all. Better to be barely used than abused.

LaBute can't quite destroy the actors who play the movie's meanies. Kinnear, as he showed in "Loser," has a real flair for playing smarmy bastards. When he's really cooking, the preening narcissism behind his fatuous grin is peerless. (I'd hope, though, he soon gets to use some of the appeal he had in "As Good as It Gets." He's too promising a romantic-comic leading man just to play nasty.) And as the producer of his soap, Allison Janney walks off with her scenes. This wild-card actress knows how to play possum. Watching her as she listens to someone making a request of her, you could be fooled into thinking that her sleepy eyes are on the verge of closing. But the wily spark of light that precedes her perfectly timed wisecracks is the early warning signal that she's about to come to maliciously witty life.

The stripped-down aesthetic and cynically calculated shocks of LaBute's first two movies were tailor-made for the indie audience. He seemed to be inventing a new style of moviemaking: coffee-table misanthropy. "Nurse Betty," which looks and (intermittently) moves more like a regular movie, might appear to be LaBute's attempt to reach a broader audience. Really, it's just a series of knowing winks to the people who swallowed his swill in the first place. LaBute has adopted the trappings of a mainstream movie in order to make mainstream culture look like the province of rubes, stupes and barbarians. LaBute is some kind of find: an auteur for people who don't like movies. A picture that finds the very existence of fantasy and romance as noxious as this one does can make you wonder why he's bothering at all.