Everyone knows that the few portable potties at Burning Man are gross. Meet the man who was responsible for keeping them from getting even grosser this year. 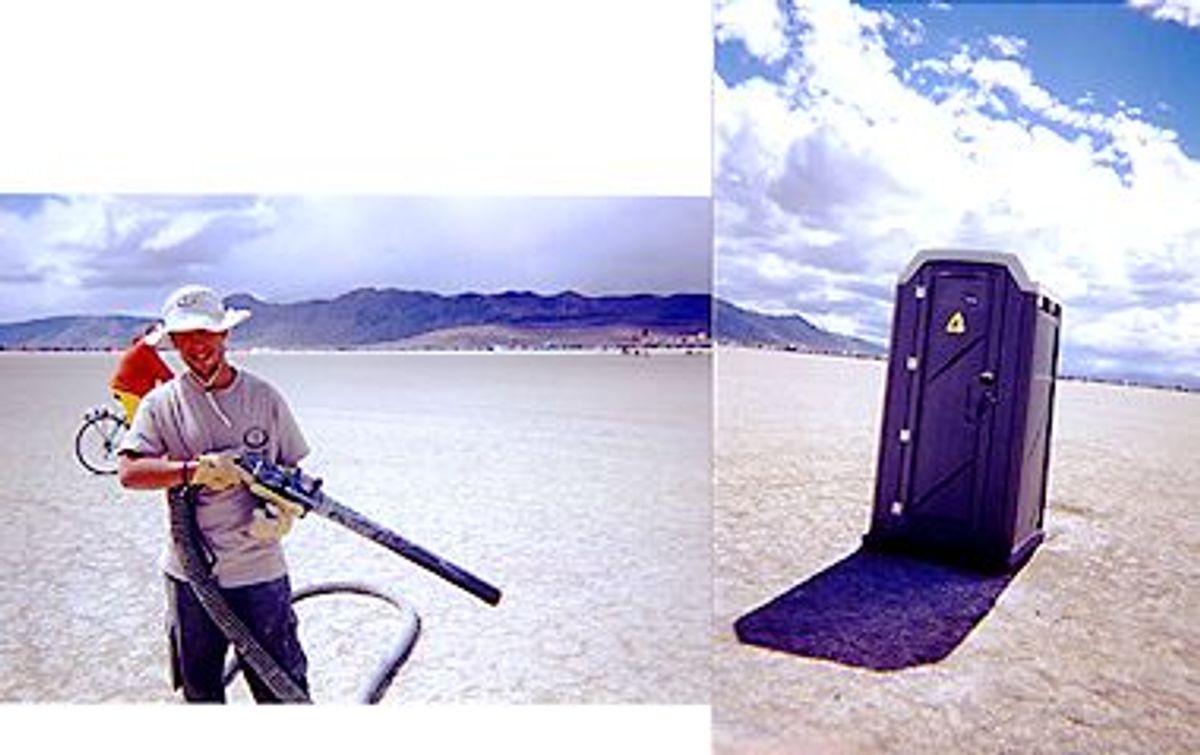 Forget the frigid temperatures, the sandstorms and the downpour that nearly ruined the first few days of Burning Man 2000 over Labor Day weekend. The issue that had Black Rock City's 26,000 temporary denizens really steamed was the toilet situation.

"I can't, I just can't," groaned one guy as he walked away from one of the less-than-ubiquitous gray structures set up here in the Nevada desert. He wasn't alone. Nearly everyone among the young, hip and otherwise restless at this year's bacchanalia spent some irritating portion of each day wandering the 5-square-mile playa in search of a usable loo -- one that was less frequented, less filthy or, at the very least, without a 10-person queue.

Outdoor facilities have been a problem since humans first invented picnics, baseball games and beer -- and then tried to have them all on the same day. But the dilemma has reached critical proportions at Burning Man. Last year, with some 23,000 revelers attending, there were so few latrines that the official Web site made a point of promising that "there will be enough porta-potties on the playa."

"I wouldn't have called it a crisis," said Jim Graham, a spokesman at this year's Burning Man festival, "but last year people did say we needed more, so we rented more." In fact, this time Burning Man doubled the number of outhouses it rented from Johnny on the Spot in Reno, Nev. ("We're #1 in the #2 business!" its logo boasts.) The festival cleaned out the company's entire inventory -- 408 portable restrooms in total -- and it still wasn't enough.

Part of the problem is the size and scope of Burning Man itself. "It's not like we can call up the people who do Woodstock or Lollapalooza and ask how they do it," said Marian Goodell, mistress of communications for the Burning Man operation. "This is a weeklong camping event -- no one else does anything like it."

In other words, they had the equivalent of a Rolling Stones concert crowd sprawling throughout a huge tent city in the middle of a remote desert for eight days. Because the conditions are so harsh -- and it was presumed that people would be consuming a fair amount of intoxicants -- Burning Man officials mandated that attendees drink between 1 and 2 gallons of water a day. "Piss Clear" was the motto posted throughout Black Rock City.

"Piss Where?" would have been more accurate. Yet the number of facilities Burning Man provided exceeded the Portable Sanitation Association of America's guidelines by more than a third. For a crowd of 30,000, the PSAA's complex ratio-determining matrix recommended a mere 250 toilets. So what was the problem?

Robert Thomas, 21, one of the guys charged with cleaning the latrines during Burning Man, eloquently described the delicate science of portable-potty usage.

"You know, it's not about how many toilets you've got," Thomas said from beside his truck, parked on the central playa. He was about to empty one of the free-standing toilets that, at 20 minutes away from the main encampment, boasted a low odor and a short line.

"You could have more toilets, but it still wouldn't matter," Thomas continued. "People just fill them up. It's weird, man. You'd think that if there were more toilets, people wouldn't fill them up as fast, but they do. And it's not 'cause they're using them more. Man, you should see what people put down there. I pull up all kinds of stuff: shoes, bottles, garbage."

With only two service trucks for the first several days of the event, something was bound to go wrong -- and it did. One truck was taken on a 15-hour joy ride by some exuberant soul, delaying service throughout the camp. "Then on Friday one of the tanks imploded," Thomas said.

Thomas laughed and pointed to the huge steel drum of his pumper truck, which held up to 3,000 gallons of waste. "There was some kind of chemical reaction inside the tank and it just" -- Thomas made a gesture like crumpling a beer can -- "imploded. I mean, thank God it didn't EXplode, you know?"

Considering how tense the situation was for some people, Thomas seemed to appreciate the lighter side. In true Burning Man spirit, he was eager to share his experiences with anyone who was willing to go there with him.

"See this?" he asked, pulling on a long hose of his truck. "We call this the shit wand," he grinned, waving it around. "This is what you suck out all the stuff with. Wanna watch?"

Thomas turned on the vacuum, hoisted the nozzle into both hands like a bazooka and kicked open the gray, plastic toilet door -- Jean-Claude Van Damme does Black Rock. Down into the murky depth went the wand, making sucking sounds that can only be described as indescribable.

And then the vacuum snorked to a halt. Thomas hauled up the hose and used his foot to remove the dripping black cloth that was clogging the nozzle. "A shirt!" he announced, and plunged back into the john to finish the job.

Not two minutes later he was done. Thomas and his assistant used a jet-stream spray to hose down the latrine, and voil`! "It's really not so bad," Thomas said. "Believe me, my first clean, I was so grossed out I almost threw up. But you get used to it. Now it's like water. You don't even think about it."

"Besides," he added with a confident nod, "you wouldn't believe what they're paying me to do this."

What were they paying him?

"Two hundred bucks a day!" He tried not to gloat. "When they first asked me to work Burning Man, I was like, 'No way!' -- until they started waving the Benjamins in front of me."

There was an awkward silence as this information sank in.

The conversation made its way back to pragmatics. Considering how quickly a single unit can be serviced, it seemed odd that overflow was such a problem. But according to Goodell, who has been part of the potty debate at Burning Man for the past several years, it might be a question of distribution.

Since Burning Man moved from its birthplace in San Francisco's Baker Beach to the Nevada desert in 1990, portable-potty placement has been an issue. Until this year, Burning Man obeyed whatever supplier it was dealing with and placed the toilets in banks of up to a hundred, usually located on the outskirts of Black Rock City.

"That's convenient for the vendor because they say it makes servicing easier," said Goodell. "But when you group a hundred toilets here and a hundred there, people won't camp near them. So last year you had to walk a quarter of a mile just to get to the bathroom."

By distributing the toilets in smaller banks at greater frequency throughout the campsite, Goodell said, the festival's organizers were hoping to address not only people's need for convenient servicing but also the aesthetics of the city itself.

"We wanted to disperse them in a way that's natural to the use of the city -- out on the playa, where we play and in the city where we sleep. Unfortunately, this year that meant you could easily find a toilet, but when you got there it was a mess."

How to resolve the vendor vs. user debacle? "It's a learning process," Goodell said wearily. "I'm sure we'll have some heavy debates about it."

Or maybe next year Burning Man-ers will come up with their own creative solutions, as one guy did at this year's festivities. According to Graham, he visited one portable toilet that someone had purchased and transformed into a jazz bar on the playa. "He did a great job," Graham said. "The guy was sick of techno music, so he had jazz playing on a little CD player, a collage on the ceiling and the inside walls done in red-sequined wallpaper. It was fabulous."

Surely Thomas would approve -- if anyone could appreciate a good makeover, he could.

M.P. Dunleavey has a regular feature on the Lifetime Channel.