The company's latest ad seems to be about the desert, America and where we are willing to go. 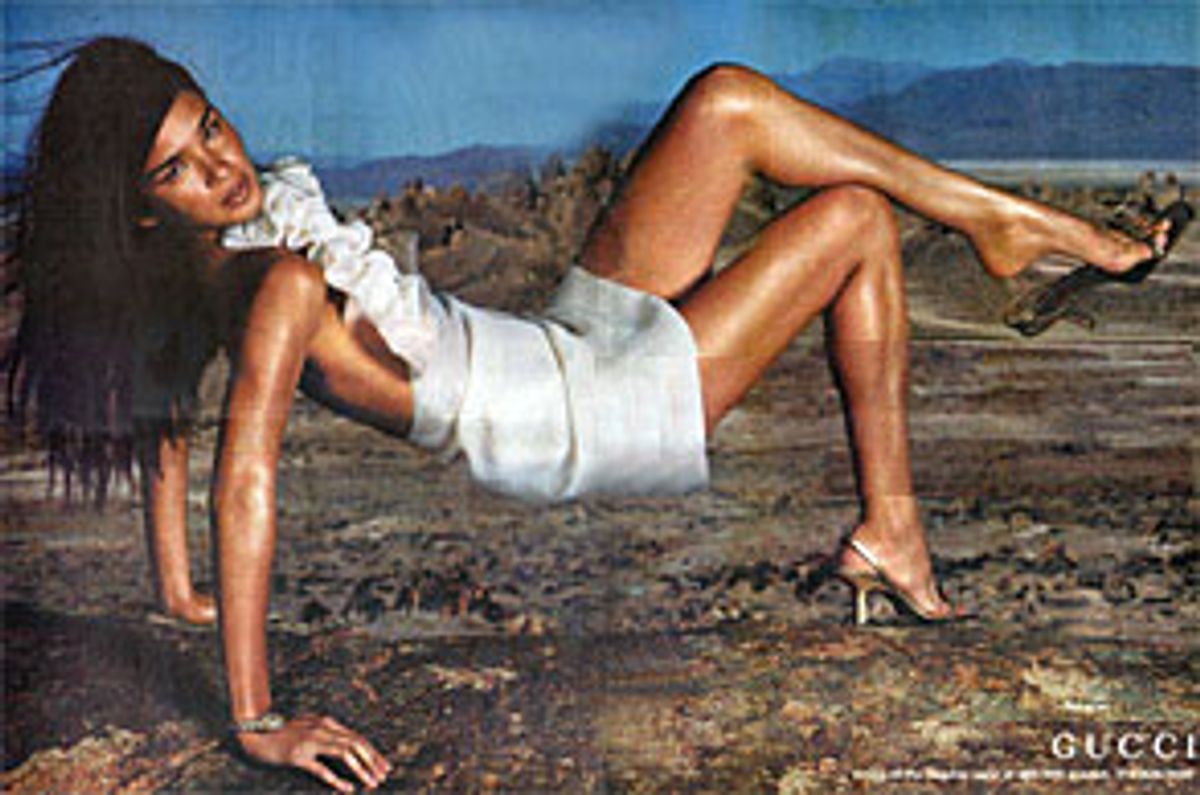 The New York Times takes itself seriously, which is all right with me because I approve of the principle of serious newspapers. And I know there are coarse words and arousing notions that it will not touch because it would be irresponsible, or merely titillating or beyond the narrow tracks of seriousness. In the same way, it doesn't reckon to hit you over the head with beauty or sexiness. If it ever has something of that flavor it makes it clear that it's only an illustration, not the thing for its own sake. So it lets the naturally humdrum texture of newsprint take away as much of the glamour as possible.

Well, usually it does, but then this week, as a double-page color spread (A16 and 17, between "Students Show Few Gains in Reading Skills" and "Trying to Prevent the Next Killer Rampage by Changing Police Tactics") it thrusts into the weave of news this picture.

I don't know her name. These days, I suppose, I don't even really know whether it was simply one young woman, as opposed to lovely bits and pieces Photoshopped together to make the whole animal, let alone whether she had actually been all the way to Nevada, or wherever it is, to find and hold this astonishing, awkward pose. Or did she do it in a loft in Hoboken, N.J.?

It's an ad for Gucci, announcing the reopening of its flagship store at 685 Fifth Ave. The young woman has on high-heeled sandals that have a brooch on the toe strap; she wears a matching bracelet; and she has on a white dress that has no back and a fancy ruffled bodice. She is posed in such a way that she leans back, supported by her flat hands on the rock, sustained or balanced by just one foot. Her head is turned to look at the camera, and her long black hair falls behind it. She's OK.

I don't know, but I can easily believe the ad space cost $150,000, and much more for Nevada or Hoboken. And, really, I do see the point: not just Gucci's angle, but the way in which you could argue that this picture tells you every bit as much about our America now as those earnest stories that inadvertently frame it.

But without going at excessive length into the sheen on the legs, the length of her fingers (honestly, they could belong to someone else -- or another species), or even the droop of her mouth and the rather horned sultriness of her eyes, I found the picture helps explain to me why I like the idea of Nevada so much. And why so much advertising nowadays likes to go to these desert places where it must be hot and difficult, even if there is a line of trailers, limos, generators and refrigerated playpens behind the camera.

She hasn't kicked her shoes off yet -- obviously, the shoes need to read. But that reminded me of the movie "Morocco" (1930) where Marlene Dietrich kicked off her equally fanciful shoes to follow Gary Cooper into the North African desert. Why? Because she loved him and wanted to be with him.

I know, it wasn't North Africa they used in "Morocco," and all the critics said, "What a ridiculous ending." But somehow, still, I think, in the middle of a serious paper, Gucci and this unnamed model are saying "I'd go into the blazing desert, wouldn't you?" And I would.