TiVo helps you find and record TV shows it thinks you'll like, and shares your viewing habits with networks and advertisers. 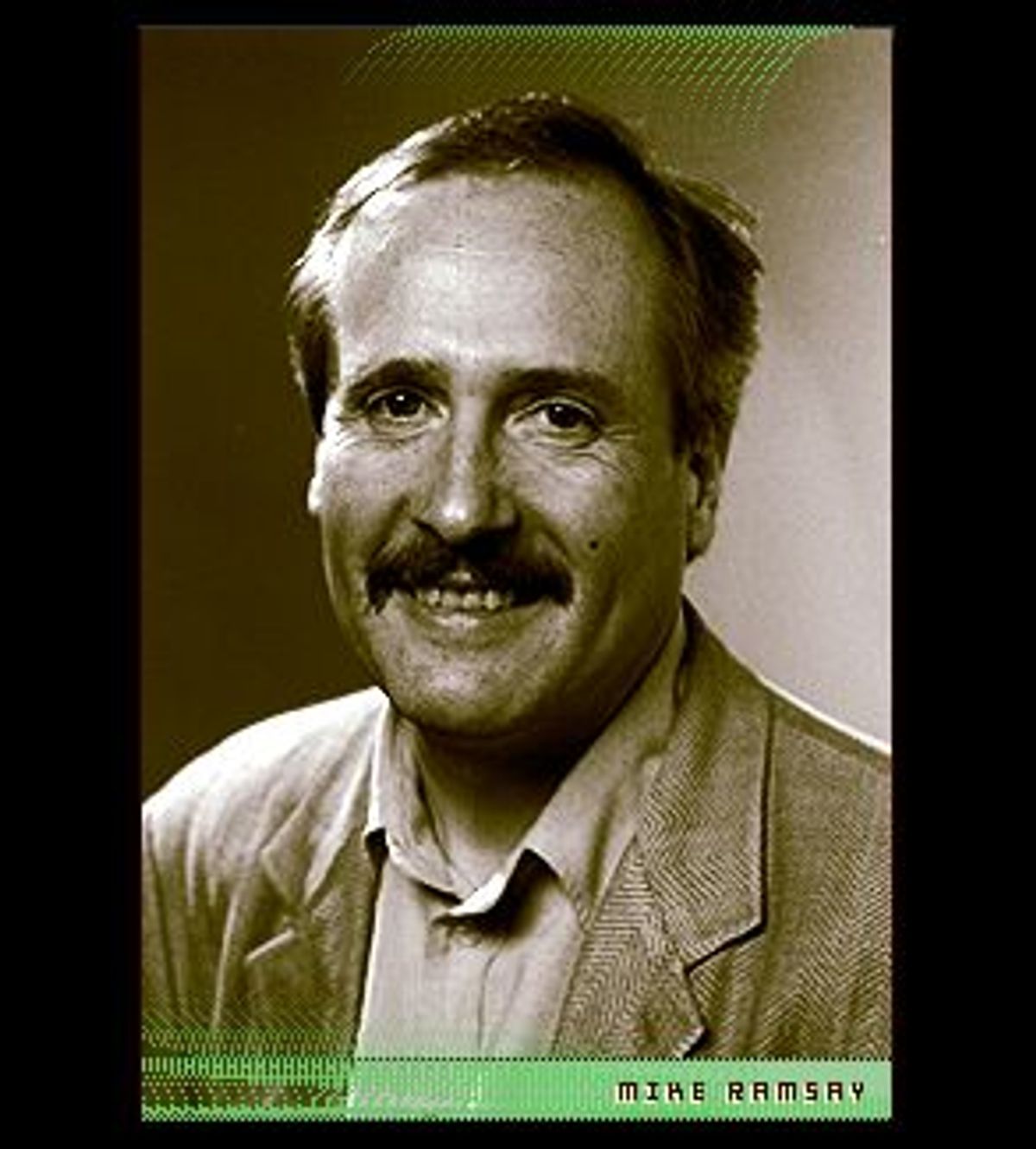 Even if you've always wanted to be a Nielsen family, ensuring that your television watching habits help shape programming, would you really want a company to know each and every time you flip to "Felicity?"

TiVo's CEO Mike Ramsay wants to use that information to sell targeted advertising and aggregate data to the networks about TV viewing habits. Sure, you'll get some benefits when you buy TiVo's set-top box ($399), and sign up for the monthly service ($10) -- like the chance to search for programs you want, save up to 30 hours of programming and even fast-forward through the commercials. But don't forget: While you're watching your favorite programs, the TiVo is watching you, recording every channel click and timing how long you spend watching "Family Feud" and noting every Pampers ad you skip.

Many people don't seem to mind. In fact, some like the service so much that they're cracking the box open and adding more memory. And Ramsay, a thick-throated Scot and former Silicon Graphics senior vice president, remains convinced that the TiVo will radically change the way advertisers, networks and viewers interact. All this from a glorified VCR?

TiVo intends to put its product in 102 million homes, but figures show that only about 50,000 people have bought the TiVo since it hit the market last year. What's keeping them away?

We get asked that question a lot. First of all, though, it is all relative. Given that it's essentially the first brand-new category of TV capability in the past 20 years, its adoption rate is really pretty fast. You have to go back to the VCR itself before you find something that was really a fundamental change for consumers and if you compare the adoption rates of TiVo with those of VCRs, we're well ahead of them at this stage of the game.

Having said that, I think it is a new category, which means you have to educate people. It takes time to do that. And also I think price is a factor. At $399, you're going to get a cross-section of the population interested, but ultimately it has to get to the $299 to $199 and below before we really reach a mass market. We're hoping that the transition will get crossed with this year's Christmas season. But I think the major factor is the education of consumers, getting them comfortable with it and interested enough to buy it.

I hear that you've also had trouble educating the networks. Didn't CBS scrap a commercial of yours and pull it off the air?

Yes, that did happen. We did a series of commercials about lifestyle-changing aspects of TiVo. And the main theme was 'create your own TV network.' We did this extremely funny but irreverent ad where we threw a network executive out the window.

They thought it wasn't in good taste.

Right. However, CBS, NBC and ABC and the other networks are the creative force behind television. It would be crazy to work against them, which is why we've worked with them from the beginning.

This technology, though, is not going to go away. This is how people are going to watch television in the future. And that's why they're working with us.

Of course, TiVo is not alone in trying to change our viewing habits. What does TiVo offer that ReplayTV doesn't?

We focus more on making what we do very, very easy. Theirs is more for the technical user. Our is more friendly.

We chose early on to make it possible to fast-forward through ads but not to completely skip them. Replay, on the other hand, decided to do a 30-second skip. That created a line in the sand, and we were on the side that has allowed us to have a much better relationship with the networks.

Still, Michael Lewis wrote an article in the New York Times Sunday Magazine last month, which argued that TiVo would essentially destroy the mass-market advertising model, essentially stripping networks of their cash cow. I'm curious: Do you think this will actually happen and if so, when?

Well, Michael was definitely making a point. And I think about the endgame, he's right. The logical conclusion you can draw is that capabilities like TiVo applied to television space will clearly cause major changes in the way television is presented to you, and also major changes in the business models of the various companies -- media companies and advertisers -- that deal in that space.

I believe and agree with him that that will happen over time. But for it to happen, this has to reach ubiquity and that isn't going to happen overnight. I'm not sure how long it will take, but it will take at least a few years.

Then the networks are doomed?

No. The good news is that TiVo allows for new ways to advertise, which will ultimately be more effective than the blanket 30-second ad spot. We're looking at interactive ads; we're putting ads and promotions on the disk as it goes out the door. We've got the ability to make ads more flexible so that if you're watching an ad and you're interested, you can hit select and it will take you to an infomercial. You can drill down and it's all in the TV space so it's entertaining. It's not like the Web, where you have gobs of information. It's easier to ingest.

TiVo also [has] the unique capability of personalization. The receiver is smart enough to look at what you're viewing and build a personal profile of what your interests are. And we can use that profile to target ads that are perhaps more relevant to you.

Are these targeted ads a major part of your business plan? How exactly does TiVo make money?

As for our business model, we're sort of a cross between AOL and a cable company in that there is a certain amount of acquisition cost, which consists principally of a nominal subsidy of the box. This enables Sony and Philips to make a reasonable margin and allows us to aggressively price it. We lose money on every sale but this is recovered through the recurring subscription fee.

Increasingly, yes, we're also adding in non-subscription revenue: from our network partners for doing network promotions and from our advertising partners, too. And in the future we're looking to do commerce transactions [where you can buy products through a click of a button]. Also we'll soon be able to do audience measurement, where we can aggregate data about viewer patterns that creates information that's useful to the networks and the advertisers.

Isn't this all a bit invasive?

We do that in a non-personal way, protecting everybody's privacy.

But regardless of how targeted the ads are, people can still fast-forward through them?

Yes. Clearly some people will still fast-forward. Sometimes, though, that's just because the networks jam the ads in all the wrong places. It's disruptive to the programming. So we'll probably see ads moving around more. They may be more polarized toward the beginning or ending of programs. We're able to do ad substitution, and some of our advertisers, especially car manufacturers, are interested in this. If you're interested in NASCAR, for example, you might get a different ad than someone who isn't.

How many of your customers are actually fast-forwarding through the ads?

The data varies, but a very large percentage. Michael [Lewis] said that 80 percent of them are doing it; we have slightly different data, but it isn't inconsistent with that.

I've read that some customers are also doing their own work on the TiVo, hacking into it and adding more memory themselves. What's your stance on this?

We have two positions. If people want to buy their own disks and plug them in to get more capacity, that's fine because there's no economic downside for us. Obviously, though, we're very concerned about protection of copyright. One of the reasons we've created the receiver the way we have is that the disk is sealed into the receiver; you cannot get access to the digital information. So we are somewhat concerned about the ability of people to hack in and get access to the copyrighted material because obviously our partners in the media industry are very concerned about this.

So you're afraid that people will save a bunch of movies, then transfer them from TiVo to their computers and eventually the Net. How possible is this?

It's an incredibly difficult task. It's one thing to record what you see onto the TiVo drive, but the format on that drive and how you get access to that drive is totally proprietary to us. It would be very difficult for somebody to actually hack into that. And as far as we know, no one is doing that today.

So maybe they just want more to watch. Is this generally the case; are people watching more TV as a result of TiVo?

Yes, people watch up to 30 percent more television when they have a TiVo. But their overall satisfaction increases. People watch a greater diversity of programs. I know from my standpoint, I used to only watch movies.

Culturally speaking, is this a good thing? Do we really need to encourage Americans to save copies of "Who Wants to be a Millionaire"?

But there are things worth watching. One of our board members and partners is Discovery Communications. They've got a vast amount of educational programming that most people don't see because they're not home when it airs.

So with TiVo what people are going to do is find things they're interested in, which means that this idea of pulp television, where once in a blue moon there's a program you want to watch that's surrounded by programs that you don't want to watch but you do because the thing's switched on -- that's going to go away. The net effect is the perceived quality will go up, the amount of time will go up. It will take away from video rentals and it will probably take away from going to the movies. And I don't think that's a bad thing.