My season in exile 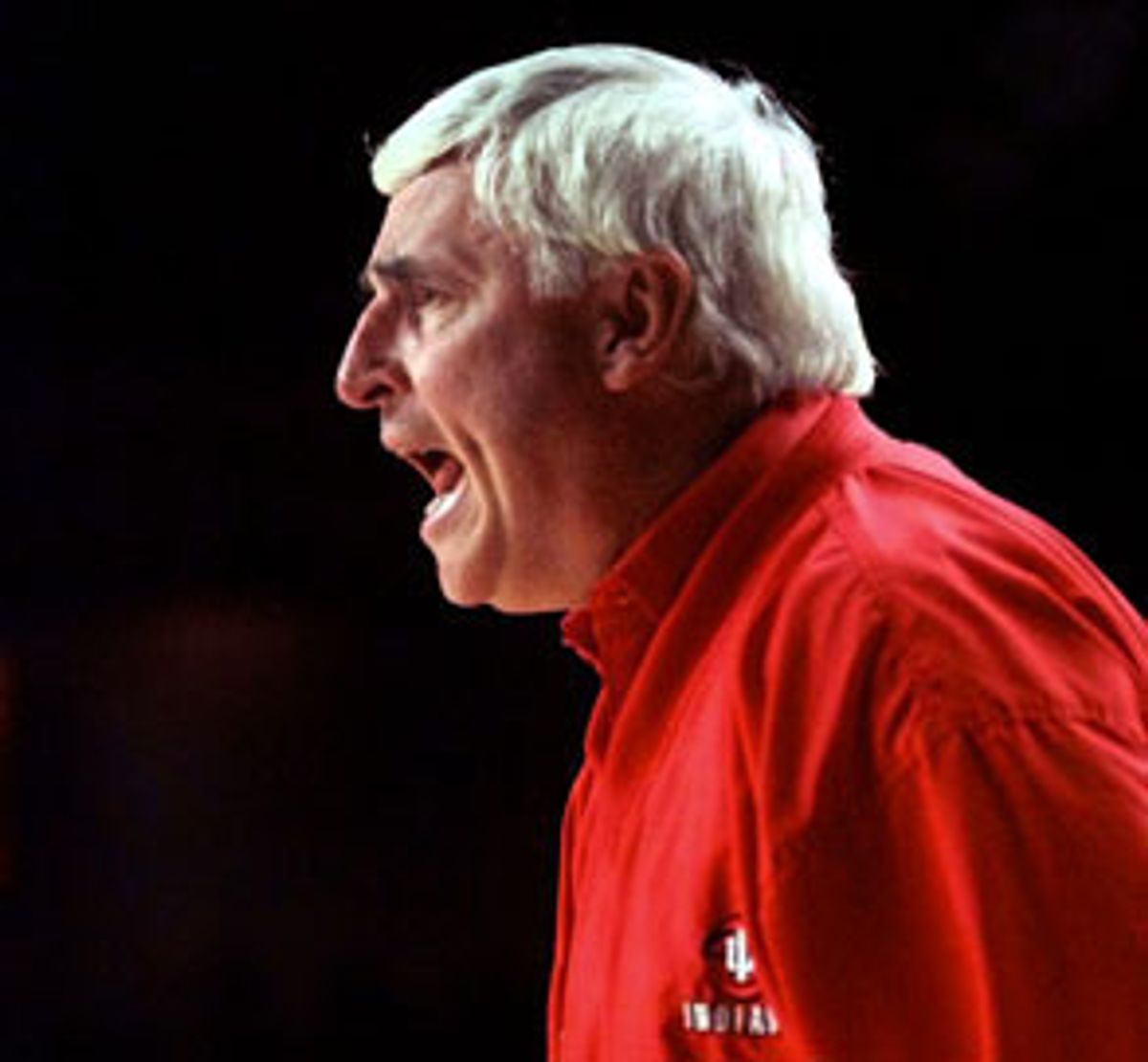 My role as a minor character in the Bob Knight saga began last March. I appeared on a CNNSI broadcast that featured former Indiana University player Neil Reed, who was complaining that Knight had choked him during practice a few years before. The CNN anchor asked me whether or not I.U. would investigate Reed's charges, or those of other players concerning off-court incidents involving the coach, and if the allegations proved true, would the school sanction Knight? Past history, I said, would suggest that no one within the university or the state of Indiana would do anything about Knight's conduct. I also termed the coach "The Emperor of Indiana."

Since the March CNNSI program on Knight, through the April revelation of the tape showing him choking Reed and into May when Indiana University rendered its judgment that he could remain as coach under a "zero tolerance" policy, I continued to speak out about the case. I mainly discussed what I had talked about for many years: how big-time college sports, particularly its scandals, can overshadow the academic purpose of a university and cause great harm to a school. I did not speak out because I wished to hurt my university; quite the opposite. I have invested 29 years of my life at I.U. and I love the school. I simply have a very different vision of it -- one focused on higher education -- than do its basketball fans.

My remarks infuriated Knight's fans and they rained insults upon me, both in vilifying e-mails and also on their group Web sites. The vilifying e-mails continued even after the university's May verdict that Knight could continue coaching. On the fans' enemies list, I had risen to No. 3. Reed, because he had precipitated the entire episode, rested securely at No. 1; former assistant coach Ron Felling, who allegedly had given the incriminating videotape to CNN, claimed No. 2. But neither Reed nor Felling had e-mail or any other kind of publicly available addresses. They had dropped from sight and the rabid Knight fans -- called Knazis by their detractors -- could never reach them. I, however, work for a public institution. In May, some of the fans discovered an easy way to find me.

The I.U. schedule of classes for the fall 2000 semester -- with thousands of copies in print and also posted on the I.U. Web site -- listed my name, the courses that I would teach, the room numbers where I would teach the classes and the times and days the courses would be taught. Soon I found my fall class schedule on the largest I.U. fan Web site, with such comments as "Let's go to Spermie's classes and tell him exactly what we think of him." (Pejorative names are part of their dehumanization process: It is easier to threaten a cartoon character than a real person with a spouse and children.)

I also received phone calls, including a chilling one ending: "If you don't shut up, I'll shut you up." And I spotted a shocking posting on the I.U. fan Web site with the subject heading "I see dead bodies," listing my name along with other Knight critics.

More threatening, though, was one particular phone rant. The caller, who sounded like a middle-aged male, boasted, "I know how to find you," and began to read the list of discussion sections of a large freshman lecture course I was scheduled to teach. As in all such courses, the professor lectures 150 students in a large hall, and graduate teaching assistants conduct the discussion sections of 25 freshmen in regular classrooms. As the caller ranted, I suddenly flashed on a scene where he, or some other lunatic, came flying through the door of a discussion section as a young teaching assistant and 25 freshmen sat there. Who knew what might ensue? And I was responsible for the people in the room. I helped choose the teaching assistants, and many of the students signed up for the course because they liked my topic. I could not, I decided, teach under these circumstances. I requested and received a leave of absence from I.U.

I then went to Montreal (I'm a native of the city and own a house here), to enjoy a place where very few people have ever heard of Bobby Knight or American college basketball. I also expected that the coach, because he wants to attain the record of the most wins in big-time men's college basketball, would behave himself and that the media would lose interest in his story. Wrong! As the president of the university revealed when he fired Knight on Sunday, in his private behavior Knight had continued to act as the Emperor of Indiana and, as illustrated in a recent public confrontation with a student, operated under his own rules.

The student walked by the coach at the entrance of an athletic department building and called out, "Hey, wassup, Knight?" The coach grabbed him by the arm and demanded that the young man address him as "Mr. Knight" or "Coach Knight." Knight, as the adult in the situation, had the option of ignoring the comment and walking by. But that's not what an emperor does. Last spring, much nastier things were said to me than "Hey, wassup, Sperber," but I exercised my adult option. I also knew that if I made physical contact with a student and swore at him or her -- as Knight apparently did in this incident -- I would violate the university's code of conduct and invite official sanctions. But I'm just one of thousands of employees of I.U. and have to live within the rules. The student, meanwhile, is now reportedly being vilified on campus to the point that he is considering leaving.

It turned out that the president of the school, Myles Brand, assumed Knight, under the "zero tolerance" policy, would also act like an adult. But the recent public incident, as well as the coach's conduct during the summer, convinced the president that Knight had not given up his emperor's throne, and so Brand deposed him. This act sparked a riot. A mob of students, many of them drunk, marched on the president's house, loudly protesting Knight's firing. Ironically, I just published a book, "Beer and Circus," that examines the student fans of big-time college sports and their alcohol consumption and, while the TV coverage of the riot provided a perfect illustration of my theories, my intellectual triumph was tempered by the fact that the event occurred at my own university.

The coach does not appear to be going quietly into that dark Knight. Rather than exit gracefully, he has returned to the campus and given interviews and speeches where he reveals his "side of the story." Then again, to my knowledge, the word "grace" has never appeared in the same sentence with "Bob Knight," and so the deposed emperor remains in character. Some writers describe him as a tragic hero, almost Shakespearean in scope, achieving great things but finally brought down by a fatal flaw. I'm not sure that the metaphor is apt. A competing one was provided by a Chicago sportswriter who called Knight the greatest creation of the World Wrestling Federation: Millions of people either love him or hate him, but they can't take their eyes off of him.

And he seems to love the attention. Don't be surprised if he coaches again. Somewhere, at one of the more than 300 NCAA Division I basketball schools, a college president will be willing to invite Bob Knight to coach his team and to continue his emperor act. Probably it will be a losing team near the bottom of Division I, a Boise State desperate for college sports success and the media attention that Knight will bring to its campus. But at Indiana University I, along with most faculty members, want the school to return to its historic function as an academic institution; personally, I hope that I can go back to being a normal college professor and a critic of college sports, not a target on an enemies' list.

As for the coach's future, being the Emperor of Idaho or some other state on the fringes of big-time college basketball will not have the same cachet. Maybe tragedy does fit Knight's trajectory from I.U. to his next job, but in the way that Marx described in the opening line of "The 18th Brumaire": History repeats itself; the first time it's tragedy; the second time, it's farce.

Murray Sperber is a professor of English and American Studies at Indiana University, Bloomington. His new book is "Beer and Circus: How Big-Time College Sports Is Crippling Undergraduate Education."