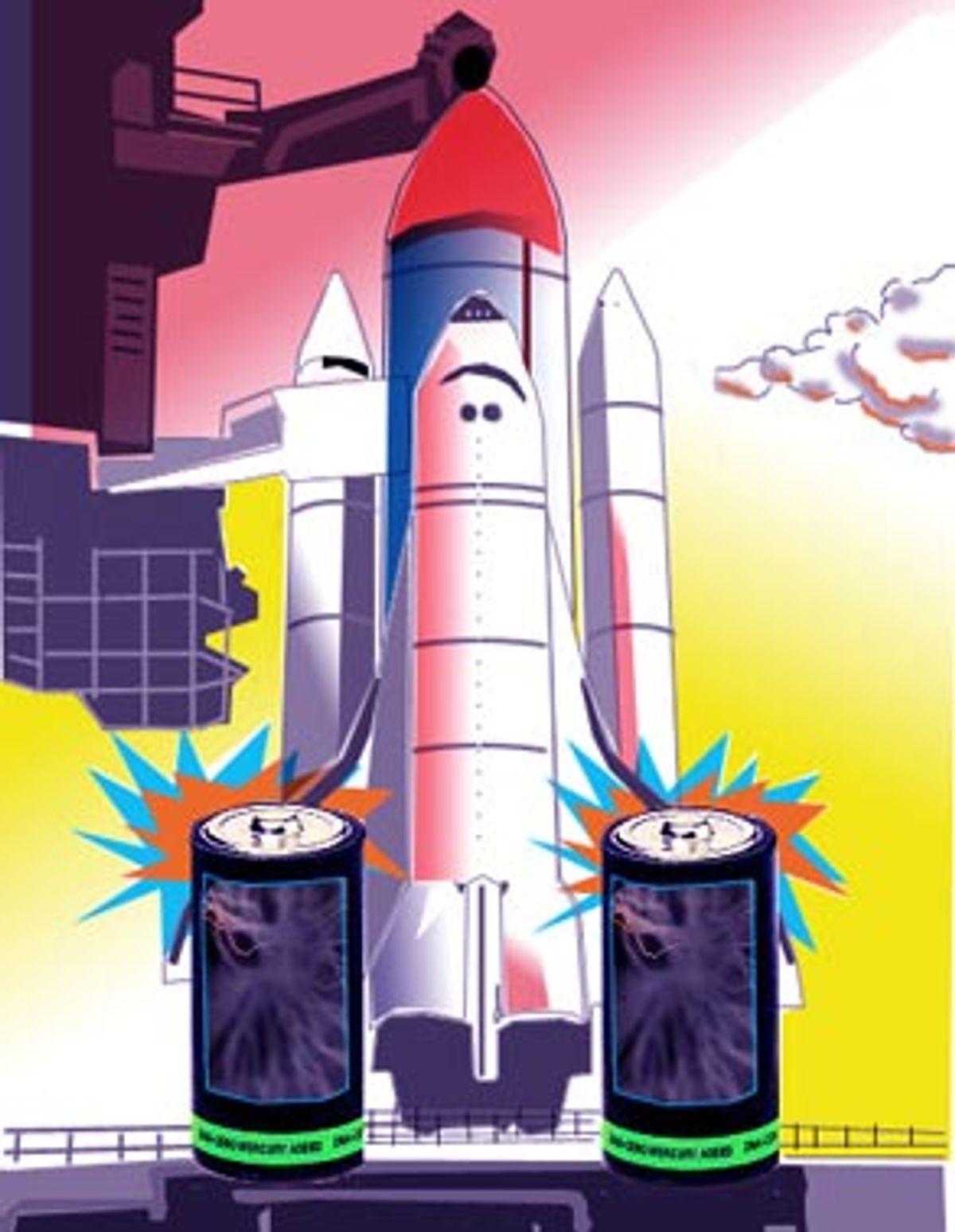 My lover and I still have great -- if infrequent -- sex, even after many years together. Yet, still I drool over attractive strangers and engage in activities that broach sexuality without consummating an illicit act. An increase in long-term relationships due to the specter of AIDS and the limping libidos of aging boomers has put a premium on full-blown sex. But it has also increased the attractiveness of what I call "charging the monkey."

Chargers deploy a wide array of strategies seeking "the cruise" for erotic reserves, stretching the limits of "not sex" as far as justifications and imaginations allow. My first notion of a silent undercurrent appeared when I innocently decided to check out a local Japanese bathhouse, renowned for being new age, straight and beyond reproach. There were tatami mats, burbling Zen fountains, rice paper screens, sauna, steam, cold dip, the works. A few burnt out stockbrokers were unmistakable. Damp and folded Wall Street Journals strategically covered the one deficiency they couldn't plump with a bulging portfolio. Everyone else was middle-aged and queer.

In polite society men and women aren't permitted to mix wearing terrycloth sarongs (half the size of a bath sheet at that) as most believe the opportunity tempts men beyond their limits of self-control. When it is all boys and most are suspected deviants, the more powerful minority apparently takes comfort from placards everywhere forbidding sexual activity. Windows into the sauna and steam areas were patrolled with suspicious intensity by sneering towel jockeys itching to vindicate aspersions to their own sexuality by busting a fag with wandering fingers.

Behind masks of earnest intent, they lust after one another with varying degrees of subtle refinement. No one speaks, but the same guys keep landing in the same locations together. The strikingly good-looking have followers in tow. Invariably they are of the same ilk as the object of pursuit, but not as stunning; such are the delusions of narcissism. In dry heat, bubbling water or through steamy fog, disinterested self-caresses and coy glances are perfected in pursuit of a silent language of hardening. Never have I seen so many men fluffed to a state of maximum tumescence, barely in repose, but short of a fully indictable hard-on. Everyone knows the game, but no one speaks for fear of spoiling the fantasy.

Health clubs are a haven to similar layers of deception. Gay men claim the gym as native habitat now, but they learned as adolescents -- if they wanted to survive -- to avert their eyes from what they most desired. The cruising that squeezes by, rife with the danger of accidentally provoking a loutish straight man, is eminently prized.

A straight trainer at my gym provides endless thrills to the queers who line up at the bench press for their daily peep show while he spots them. As he straddles their upturned faces in his baggy shorts, they're storing away the spectacular view, huffing and puffing, getting off on the glorious possibility of sweat from his pendulous balls dripping right in their eyes.

The value this exhibitionism holds for him when he later throws a hump to his girlfriend is less clear. Maybe he isn't so straight; everyone lands somewhere between on the Kinsey continuum. If he is oblivious, it must be a coincidence that all his shorts sport extra-wide leg holes. Sure, and it must be his aversion to underwear that gives him that perpetual semi-hard-on.

Fleeting encounters sometimes reverberate with the greatest echo. I remember with crystal clarity waiting in a line to get into the bathroom at a cineplex. As I always do in a crowd, I checked out the hot guys while exposing no obvious signs of doing so. One man was so gorgeous as he flirted with his date, batting long eyelashes, tossing floppy bangs and beaming his bashful smile that I knew I would wither in shame just to meet his gaze. Naturally, fate placed us pissing at adjacent urinals.

Because gay men conceal their desires, we've developed the remarkable ability to stare at someone in our peripheral vision. Naturally, I used my secret power to take in Mr. Beautiful draining his hefty joint, all the while remaining stridently face forward. We each stood back far enough to let the other get a good look -- without looking -- and handled our plumped appendages far longer than necessary to slap out the last drops. He hoisted himself back into his jeans with the usual exaggerated affectation -- as if the thing weighed 10 pounds -- backed off, turned and looking me straight in the eye, winked and flashed that adorable smirk. Out the door, never to be seen again, his furtive charm, left hanging in midair, resonates indelibly.

Freshly shampooed, my defenseless head poking through the apron cone, I awaited Joey to assess his task. He was ruggedly handsome with full lips and piercing green eyes, friendly and polite but appropriately disinterested in a hetero way. Initial gaydar read, "no dice!" As the haircut progressed Joey increasingly needed to lean into, over and across me to get at just the right angle to perform his trimming. Without revealing any overt interest, he ripened a rock-hard erection, unmistakable through his flimsy pajama-style pants. He leaned it into the side of my leg, brushed it against my arm -- and when that raised no objection -- pressed the monster forcefully against my cheek as he pulled my face toward his crotch, ostensibly to shave the other side of my neck. Helpless to resist I popped a throbber. His timing to a science, he knew just when to drop his comb into my burgeoning lap. Fumbling to retrieve it, his fingers confirmed my excitation and a job well done. The whole routine was performed without a hitch and with no hint of solicitousness, just as my friend described. A perfunctory shoulder squeeze sent me on my way. As a testament to Joey's skill, I felt uniquely chosen even as I walked out past a waiting room full of salivating boys.

I chose my masseur based on the guileless expression of his distinctly non-posed picture. My heart swelled with gratitude for the precision of photography when he answered his door naked. With candles flickering against a background of ambient music, I stripped and settled, face-down, into the firm caress of the table and his hands on my shoulders. For the longest time I dissolved into the geometry of music as knots of muscle on the road to calcification unfurled around my spine. When he lay nearly prone over the top of my head to plow down each side of my inner thighs, I surreptitiously lifted my eyes from the well. His Cyclops, fully erect and poised like a missile, stared me straight in the face within tasting range.

It was time to turn over, the defining moment, especially after one big boner begets another. I shut my eyes, embarrassed, but now quaking with expectation. Stringing me along, he worked my toes, feet, legs, hands, fingers, chest and stomach. From large muscle masses he spiraled in toward the pulsating vortex of all the blood in my body, casually moving my erection from the path of his business. I resolved to stay planted in deep relaxation, but my spring-loaded penis, no longer content to be put aside, demanded a firm grip to be held at bay.

What I assumed was the dude's slippery hand on my dick turned out to be suctioning lips and a bobbing head. His fingers engaged the thrust of his own pulsing member. My head and chest sprang like a catapult. He interpreted this as a move to reciprocate. He grabbed my hand, placed it around his hard cock, threw his head back, and gasped as we siphoned our loads, buckets full together, mingling and settling like warm pearls on my chest and legs.