Why are there no recipes for what to cook when you have nothing at all? 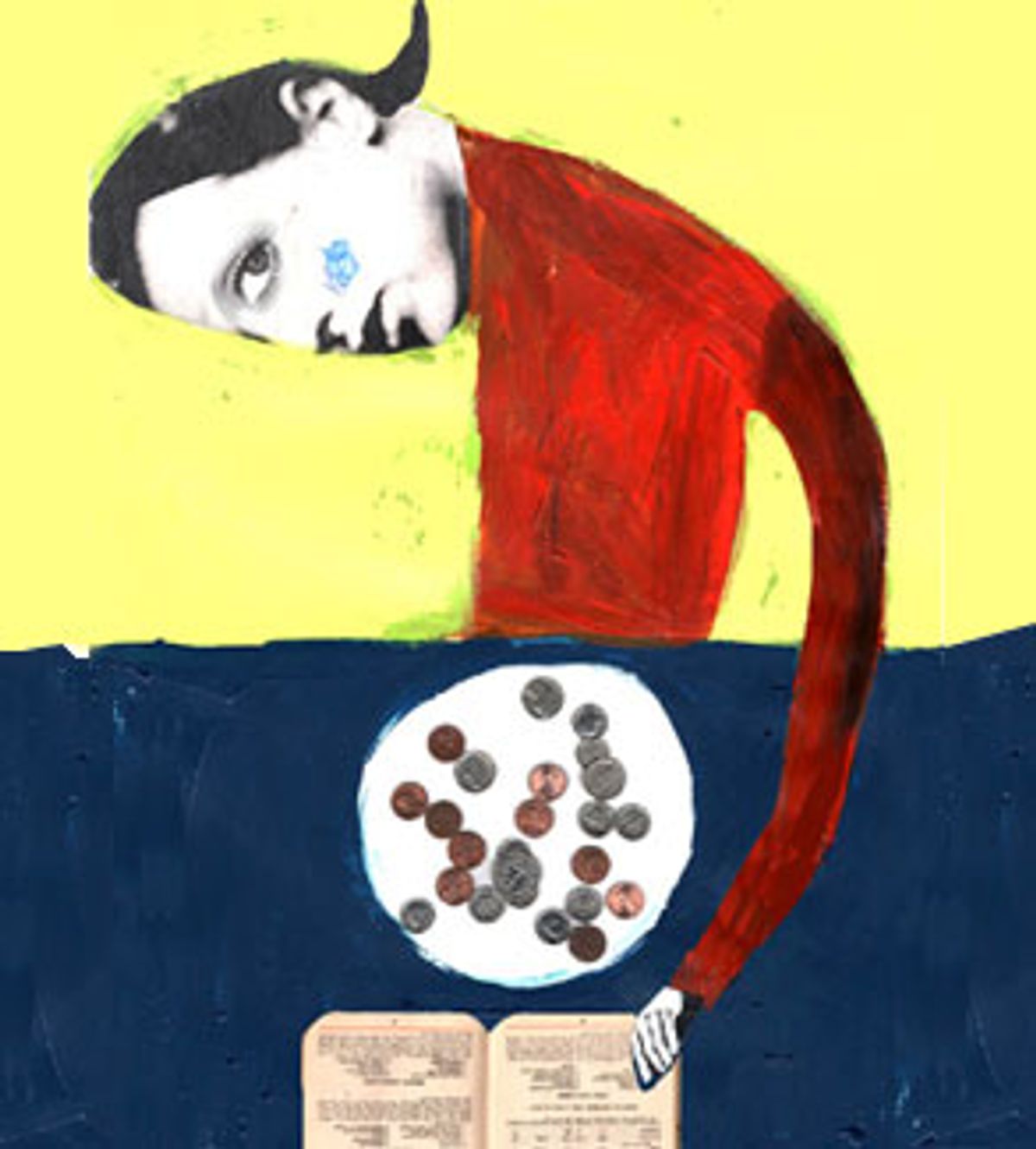 I don't remember a lot about my childhood. The details of day-to-day living are long obscured. But I do recall the steaks. Every Friday night, we would eat thick, sizzling steaks in dimly lit restaurants. It was a ritual for our family. Even now I can see the red vinyl booths and the tasseled menus we read in the flickering candlelight. My father tipped generously. He always knew the waitress, the owner and whoever was playing the piano.

After the steaks, my father's third scotch and my mother's 10th cigarette, he would invariably call over some employee, a smiling woman whose tired lines were partially obscured by the dark of the restaurant.

"Tell Charlie he doesn't pay you enough," my father would say, his voice a slurred mixture of the Texas orphanage he grew up in and the phony Eastern prep school accent he'd mastered over the years.

We'd marvel at the fresh 20 he was giving away.

Not everyone we knew ate in such restaurants. Many of our friends didn't eat out at all. We knew we were different, and lucky, and set apart from the kids whose parents made them order hamburgers on the rare occasion -- a birthday, a holiday -- that they were allowed to dine out at all.

We could order anything we wanted.

We both wore black patent leather shoes, my younger sister and I. We sat up straight, one hand in our laps at all times. We sipped Shirley Temples.

I felt rich. We weren't.

I never imagined that my life would change. It did.

As such stories go, and I've heard enough of these stories to know, my family's dismal descent into poverty was ordinary. My father drank, lost his job and disappeared. In my mind, there's color television poor, with a car that runs and some hope; and then there's wondering-where-your-next-meal's-coming-from poor. Even with my mother and I working full time, we were in the latter category.

My first job involved stuffing envelopes at a dining card company, where I made $1.35 an hour and my mother made 30 cents more for typing. We went to work at 4 p.m. and got off at 11. Before graduating from high school, I also worked as a bus girl, a cashier, a salesgirl and a teacher's aide. If I had an evening off, I took baby-sitting jobs. Homework got fit in, late at night, if at all.

After we lost our house, and moved in with two other families, my mother had this grand idea that if we returned to our old neighborhood, everything would be all right. This meant that we could pay the rent, but we couldn't eat. Only one of the families came with us, but soon left. From the outside, our two-story rental, offered to us by a friend of my mother's at a charitably cheap price, looked like every other house up and down the block. Inside, we were dead broke. Some days, I think, we lived on air.

Christmas was the best time. Neighbors came by with little disposable tin trays loaded up with home-baked cookies and slices of gingerbread. I don't think they had any idea how much these gifts of food meant to us. One particularly bad year a friend gave us a bucket-sized basket of nuts and oranges, with chocolate candy kisses thrown in, too. We couldn't believe our good fortune. Somebody must have known our situation, though, because one holiday, a local Girl Scout troop delivered some presents to our doorstep. I got an Avon sachet cream. It came in a small red jar. I was thrilled.

Thrilled, that is, until I remembered that I'd been a Girl Scout myself at one time.

In less than two years I'd gone from being someone who gave charity, to someone who received it.

During the time we lived in our rental with another fatherless family, I remember watching the woman grimly fry up chicken livers for her three children. "We're poor," she'd say. She'd say this two or three times. All the while her kids would be crying. I can't say I blamed them.

In our family, I did a lot of the cooking. I never wanted our dinners to seem poor and pathetic. My specialty was the "Everything You've Got" meal. If I had hamburger I browned some, and added rice, frozen vegetables and anything else that was available.

Since I rarely had eggs around, for dessert I'd mix up margarine, sugar, flour and milk and turn it out into a rectangle. Then I'd spread jelly over it, roll it up, bake it and slice it.

But sometimes, we had nothing.

I can remember standing in Ralph's grocery with only $1, trying to figure out the best way to feed three people dinner, fast. The answer: a can of Campbell's bean soup and a package of corn tortillas. I had change left over.

It was the '70s. Nobody I knew gave much thought to poverty. In my high school, there was only one person not attending the speech and debate team's potluck dinner. The coach, a redhead, was furious. I kept quiet as she screamed. "Why? Why? Why?" I wondered if she was wearing a wig, her hair was that red, that perfectly set in a tight flip.

There was hardly enough food in my house for me, much less enough to make a dish that would serve eight. Sometimes though, life offers surprises, good ones. Neighbors, anonymous angels, had left two bags of food in our garage. Among the goodies I found when I got home were eggs, cake mix and margarine. When I sailed into the school auditorium that night I was ecstatic. Friends called out, surprised, happy to see me. Nothing was good at home, but it didn't matter. I had a dish of food in my hands. I was like everybody else. It was the best day of my high school life.

So many years have passed since then, but still I wonder why there are no cookbooks for poor cuisine, no recipe to see you through such times. I imagine that the footnotes to such a book would graphically depict not only the nutritional value of beans and rice, but the secret sources of wealth.

Mix half a cup of beans with carefully watered dreams and add a new wardrobe and some confidence, my magic cookbook would say. Everyone who ate this dish would be able to hold her head up high when she walked into a job interview or a neighborhood bank. She'd know where to sit, and who to talk to. The language of numbers, the high-rise world of success, would not be foreign.

When I was in my 20s, with a nice career and the bad years behind me, I'd sit at the bar that served as a table in my apartment, slowly eating my dinner. The cupboard doors would be wide open. I'd watch the cans of corn and tomatoes, nearly mesmerized by the stack of tuna next to the small plastic bags of rice and beans.

Today, I'm the only woman I know who actually enjoys grocery shopping. Up and down the gleaming aisles I go. There must be a million choices. I shop in a place where a guy comes by and instantly replaces the last can taken. It's the Disneyland of food stores. What fun. I'm a long way from Desperation City. Once in a while, I do think about that girl desperately studying every soup can, looking for something filling, something cheap.

But I do know there's someone out there just like her. There are, in fact, too many people out there like her, hungry and hoping. Maybe in another town, another store. Perhaps the next aisle over. Who knows? Maybe I'll bump into her.

If I did, I could only pray that she will be lucky, too.

Jodi Greenbaum is a freelance writer.