Did the Republicans engage in subliminal advertising tactics with their Gore attack ad? 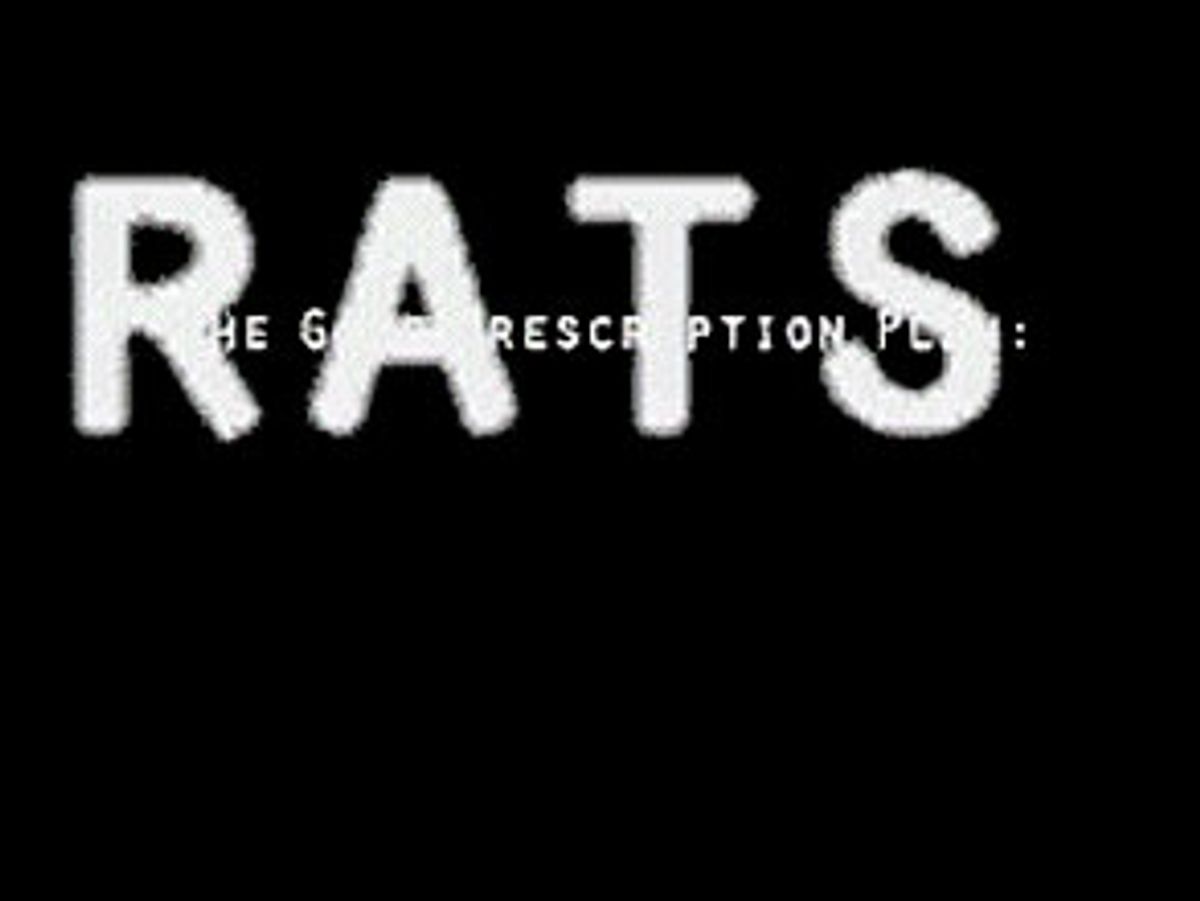 The Republican National Committee was trying to give George W. Bush a needed boost when it started running its "Priority" ad attacking Al Gore's prescription drug program for seniors last month. But that helping hand backfired when people began noticing something unusual: The spot's makers seemed to have adopted a bit of subliminal advertising. For a fraction of a second, toward the end of the 30-second spot, the word "rats" appears in big, capital letters.

Bush himself denied any foul play, saying that the flash was a coincidence, and insisted that the ad would continue to run. Only a few hours later, Bush announced another coincidence -- the ad was scheduled to be dropped anyway. But a panel of advertising experts convened by Salon says the decision came too late -- the damage has already been done.

I think this is all just too pathetic and silly for words. Subliminal advertising? Give me a break. What exactly is subliminal about an ad that overtly blames Gore for the rise in prescription drug prices during the Clinton administration? This ad is very out front about trying to position Gore as a man who is trying to help the drug companies instead of senior citizens. I'm not at all certain that's a true statement, but that's the impression this ad gives. Does the fact that the word rats has been pulled out of bureaucrats and flashes across the screen for 1/20th of a second make this ad more subversively compelling? Not at all.

I think what we're seeing here is the producer and editor amusing themselves at 2 in the morning by trying to insert something -- anything -- in this ad that would make it interesting for them to watch. I can visualize them holding their sides with laughter every time it played back in the edit suite: "Look what we did. It says rats, har, har, har."

The whole issue of subliminal advertising has been flogged for years by a paranoid nutcase named Dr. Wilson Key who insists advertisers have been sneaking images of naked women and skulls (go figure) into photos of ice cubes as a way to make ads for scotch or soft drinks more effective. Please. Who has the time or the resources to engage in this sort of nonsense?

A good ad is an ad that engages people, an ad that makes you want to make a connection with that brand -- or that candidate. If that seems like a foreign concept, maybe it's for the simple reason that there have been no good ads in this campaign.

So here's the scariest thing for me. I have this awful fear that Bush actually has a better advertising agency [than Gore]. And when I mean "better," I use the word quite loosely. I don't mean smarter, more innovative or more strategically focused. I mean more evil, more devious and more morally corrupt. Which can, in a sense, create more effective (yet evil) advertising.

Note their sly use of Gore on the TV set. We have seen them use him this way before. If they can portray Gore as existing only in a box, he becomes unreal -- a talking head, a figment of our collective TV imaginations. Bush, on the other hand, is a man of the people, according to their portrayal. He rolls up his sleeves, takes the bus, hangs out with the folks. He's a guy I can trust.

The word rats is much more obvious than I would have thought. Usually, a single frame from a 30-second spot isn't recognizable, much less readable. I would suspect that it happened inadvertently, but having done it, the producers of the spot decided to let it go. Maybe they thought it was funny. Maybe they thought they could explain it away as part of the word bureaucrats but still get some buzz from it. They certainly got the buzz. My guess, however, is that the buzz will end up being negative. While professional advertising people don't use subliminal techniques, consumers suspect it, and they don't like it. Nobody likes to be manipulated. It also smacks of a Nixon-style dirty trick. One, big backfire, if you ask me.

I don't know anyone who tries to do subliminal advertising now. They tried it back in the '70s or '80s with naked women and ice cubes. But it can't be too convincing or someone would be hammering me to do it.

I would imagine that it wasn't an accident in this, because when you edit an ad, you run it at a very slow speed. It's hard to believe that no one saw it. They're looking pretty stupid for doing this. No matter what they say now, there's still that frozen screen with the word rats there. By trying to use subliminal messages, the ad comes off as childish and low-brow.

Tom Dixon is creative director and partner at Meyer & Wallis in Milwaukee.

The ad is just like most other political ads. Creatively, it sucks. Whether it will be effective, I can't say.

Subliminal messages are an old debate in advertising, thanks largely to [Wilson] Key's book from the '70s. For the most part, I view this as a kind of witch hunt. But if anyone were to use it, I wouldn't put it past those mudslinging political advertisers.

This particular spot is using a device that's common to commercials -- adding movement to type to keep the viewer's attention. It's conceivable that the producers just stumbled upon this coincidence while editing the spot. Using a technique like this is usually trial and error.

But there is no way the producers wouldn't have noticed the visibility of the word rats -- no matter how brief. As producers, we nitpick this stuff to death, looking at it with a much more discerning eye than any viewer is ever likely to do. And if the producers had missed it, I'm sure the studio engineer or graphics person would have caught it.

My guess is it wasn't planned, but they discovered it during editing and said, "Hey, that works out pretty cool! Let's leave it in!"

Now, I must get back to work embedding secret messages into some adult diaper commercials.

Richard Blow is the former executive editor of George magazine, and is working on a book about John F. Kennedy Jr.

Vanity Fair's Gail Sheehy thinks W. is dyslexic. I don't. I think he's schizophrenic. He claims he's a conservative, but in ads like this, he sometimes sounds like an FDR liberal. Let's add a prescription drug benefit for seniors to Medicare, Bush says. Medicare equals big government. Adding prescription drugs to Medicare equals big government spending. But then he turns around and says Gore wants government "bureaucrats" (yikes!) to be involved in his plan. Newsflash: Whether they work for the government or the HMOs, bureaucrats will always be a part of healthcare. So now W.'s for the HMOs, which makes him a conservative again. Then this ad closes with the words, "Freedom to Choose." W. is pro-choice?

This isn't dyslexia -- it's ideological incoherence. And it's slowly killing the Bush candidacy. The man has never given any serious thought to his political philosophy, so it makes no sense. And that's why his sentences don't either. It's all starting to catch up to him.

Oh, yeah. This ad also inserts a subliminal message -- the word rats -- near the end. I think that's a Freudian slip.

Dan Cohen is an associate creative director with DDB Worldwide.

I'm not sure why everyone is so concerned about negative subliminal advertising. For me, the word rats is just one second of a 30-second spot that rips on Gore. I think it was an adequate ad. I don't think that rats was accidental, but it was just a piece in a lame ad puzzle. Candidates are called worse things than rats, and I think that people are getting their knickers in a knot over nothing.

David Rosen is an associate creative director in the New York office of Deutsch.

There's no way it was accidental. They had to watch it a few times while it was being edited, and when you're editing something, you definitely look for a big gaffe like that. If it is really an accident, that would be the kind of mistake that someone would get into big trouble for.

The ad could easily work against Bush. First, people will think he's the kind of man who would OK an ad like that. And viewers will feel insulted. They'll say to themselves, "Does he really think we're that dumb, that we wouldn't like Gore because someone calls him a rat?"

Gad Romann is the creative director of the Romann Group, a New York advertising agency.

Anything that's subliminal in adverting isn't subliminal. It's just what people look for. In this case, it was obviously clear enough for people to catch it.

This campaign is taking the whole political game into a new low. The presidential campaign has dwindled down to such trivial issues. We should all say, "If you're going to continue with this kind of mudslinging, we're going to walk away.

Personally, it makes me lose interest in following the race. It doesn't turn me off one candidate or another, it just makes me think that the whole thing is not worth my time.