An ex-workaholic new media director who quit her job at a major magazine ponders caffeine absorption, phone interviews and choosing the perfect gig. 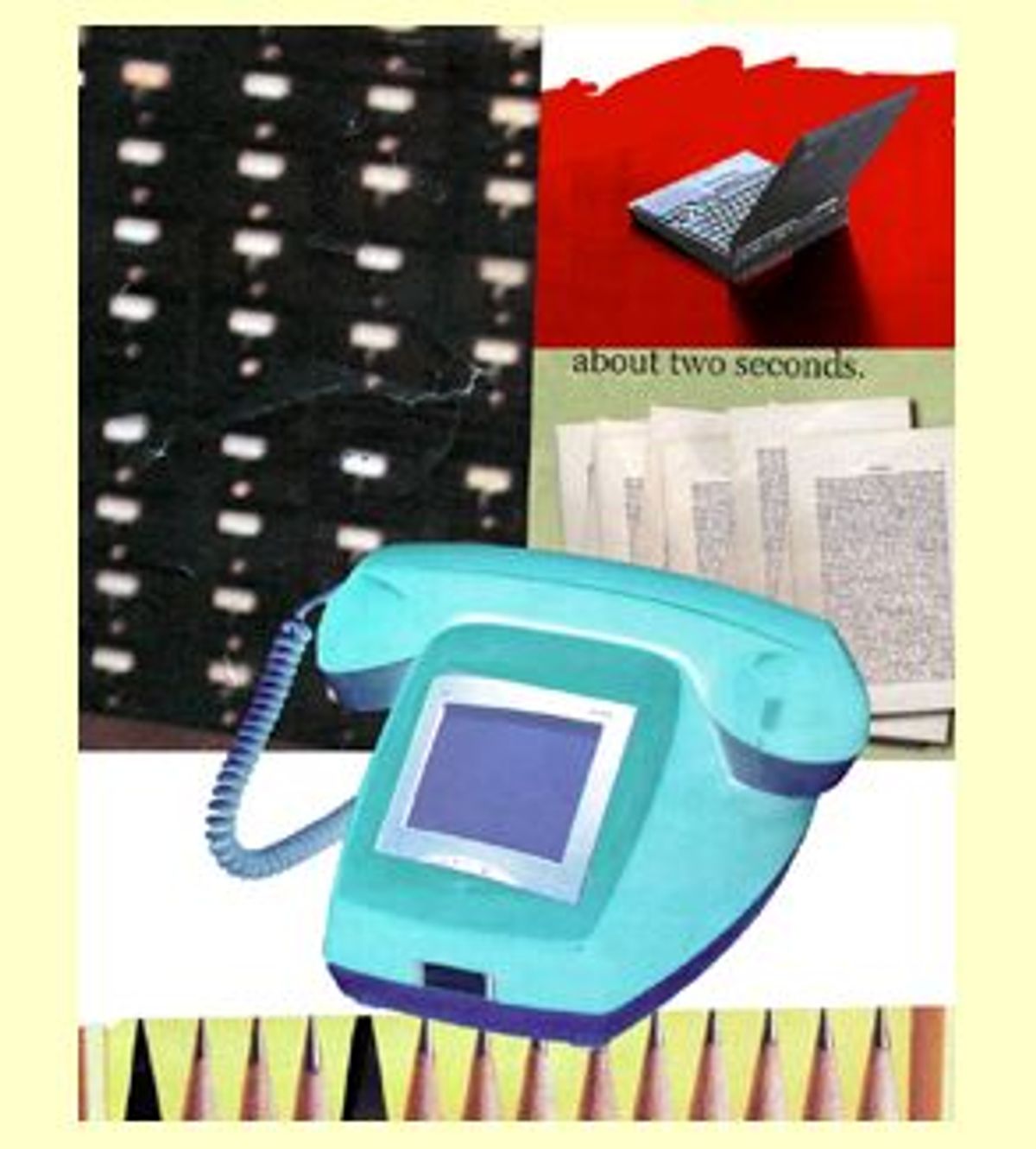 Falling into the "tired and not rich" category, my hiatus from years in Internet land was well spent, but short-lived. I had barely defumigated my swimsuit from the sulfur springs in Italy, when I was back in New Jersey contemplating my next steps. My burnout occurred simultaneously with the April Web "crash," so before going back full speed into the fray, I dipped my toes in cautiously, undertaking a few consulting stints before plunging completely into an uncertain landscape.

At 1:30 p.m., I drew the curtains in my apartment. Beautiful weather and the pool beckoned, but I had to focus. With 30 minutes to go before my phone interview, I needed quality prep time.

I strategically slurped sips of Coke while surfing the company's Web site. I tried to plan my caffeine allowance to last the duration of the interview. When the stove timer went off at 1:45, I kicked it up a notch and did super shots at five-minute intervals.

I glanced at a mirror and noticed my hair was mussed up. I grabbed a brush to make myself more presentable. Even though no one would see me, I needed the self-confidence good hair could bring. Still, I couldn't shake my sluggishness. With only 15 minutes to go, I knew I had to spout out quick answers about Web partnerships I'd negotiated, revenue I'd generated and traffic I'd grown. In my last interview I'd been in the zone, with folks marveling at how, with precious few resources, I'd sustained huge traffic spikes, leveraged advertiser relationships and personally monitored server logs during the wee hours of a major launch.

With caffeine stalled in my veins, I was desperate, so I tried to think of quick aerobic exercises to circulate my blood. I launched into jumping jacks for the first time since grade school and tried to recall Jane Fonda videos, but could only think of Cindy Crawford's injury-inducing routine. Noting the clock, I launched into Plan B: good old-fashioned jogging in place. Immediately, I felt energized, but then realized I wasn't wearing a jogging bra. There was no time to change clothes, so I supported myself with folded arms and soldiered on.

I sat at my desk, and lined up the cordless phone, laptop, Coke, pen and paper. The woman in human resources told me to expect Bob's call, so I waited and waited. At 10 after 2, I debated whether I should call Bob. What if he were sitting there waiting for me to call, thinking I was a slacker? No, I thought, he's just wrapping up a meeting and would be annoyed if an |ber-eager candidate phoned him instead of following instructions.

But a few minutes later, I decided to risk it and call first. Bob answered on the first ring, saying he had been waiting for my call. I tried to explain that I'd been told he would call me, but I didn't belabor the point to make a bad beginning even worse.

Compared to New York and San Francisco interviewers, Bob's laid-back Los Angeles phone manner was refreshing. He chatted easily and asked me to summarize my background. Maybe this firm could offer all the excitement and opportunity of the Internet without the pressure-cooker environment of Silicon Alley or Silicon Valley. I went through my shtick of career highlights, pausing for emphasis on dramatic points involving my increased responsibility after the sudden company relocation.

Bob then cut to the chase and asked my thoughts on competitors and how they fit into this "B2C space." The HR woman had tipped me off that they wanted some tangible business plan strategies, a tactic I had employed with candidates at my past job.

I switched screens to my notes and went down the list of competitors, explaining how Bob's company stacked up against each one. Afterward, I took a giant gulp of Coke, expecting kudos for my efforts. The Coke was halfway down, when instead of a lengthy response or even a rebuttal he simply asked, "What about CyberWidget.com?" (Not the real name.)

Nearly choking, I quickly went back online and typed in what I guessed to be the Web address for the one competitor I'd missed -- the only one he apparently cared about.

"Well, it's interesting, Bob, that you mention CyberWidget," I said slowly, watching the hourglass hover while the site downloaded. "To start, I feel like their entire site design could really use an overhaul." The download crept slowly upward from 50 to 60 percent.

"How do you mean?" Bob wanted to know.

"It's just confusing to understand their business proposition and the value it brings to the user. Their product offerings are somewhat buried and I can't tell where I'm supposed to be looking." This was a standard problem with many sites, and, as luck would have it, CyberWidget did have small, unreadable type for its primary content. I then launched into a lengthy speech on site design and the need to get back to basics of user interface to enhance value and increase click-through.

Bob agreed, but wanted to know what I would do to move his company forward. I took a long breath, and told him about what I thought was a major issue -- that they didn't reach consumers until phase two of the buying process. Bob could only disclose a few details, but acknowledged that the problem I mentioned was the company's major issue. Each week, they debated it internally with consultants and their board of directors.

I then discussed some strategies, but failed to come up with anything earth-shattering.

Bob made it clear I didn't give him the gem he was looking for, but I felt good about pinpointing the company's major problem and giving a decent competitive overview.

Bob thanked me for the interview and wanted to know if I would have any "issues" with moving to L.A. Images of cross-country flights, apartment searches, buying a car and fighting traffic flashed before me.

After I hung up, I was finally feeling wide-awake and energized. I opened the curtains and decided to go to the gym. Now, if only I could find my jogging bra.

At about 10 p.m., the phone rang in my apartment. It was someone who had my risumi in front of him, and wanted to know if I had a few moments to discuss a job opportunity.

I was sleepy and full of wine and dinner, but I agreed to chat.

He told me he was the co-founder of an Internet start-up. After telling me the name, I pulled up the Web site on my computer. The site was sparse, featuring only biographical information. It was operating in stealth mode, unable to disclose its prized idea.

This amused me slightly because before the April Web crash, it was fairly common for friends or former colleagues to remain mum about their business models, explaining they were on the cusp of the next big idea and sworn to secrecy. Firmly and passionately, they adopted mysterious demeanors and alluded to their future status as the next Bill Gates.

But this man seemed quite earnest and had impressive credentials. Although he couldn't tell me details of his business, he held my interest by giving me tidbits about his launch plans and named some of the companies that had expressed interest. A bit looser than normal for an interview, I challenged his timing on funding rounds, as well as his marketing and launch plans, based on the little information he'd given me.

He then quizzed me on my background, and I chattered on breezily, launching into excruciating detail about my years in the Internet world. Usually first interviews are like first dates; you share only enough to evaluate interests for future rounds. But I bubbled over far too long with a history of contracts and strategic deals I'd negotiated and maybe some that I hadn't.

The next day, I couldn't remember exactly what we had discussed. I knew I had a good feeling about the owner and the company, and that somehow he had persuaded me to make the trip from New York to Virginia, still not knowing the business model.

Within a few days, I found myself in Herndon, Va., meeting with the president of the company and taking a tour to meet his staff. In our first five minutes alone in the conference room, I signed my life away on a non-disclosure agreement, a hasty formality I'd done in the past merely taking business deals to the next level. But this time it was more dramatic, and I read through and quickly signed the documents, eager to learn their plans.

Within five minutes, he had the company plan mapped with a magic marker on a white board. This was his baby, and he unveiled each component with pride, drawing the plan together with circles and arrows at the end. With business plans you're generally lukewarm or quite impressed. I was impressed. And so, apparently, were some investors.

We discussed different aspects of the strategy, and I tried not to repeat myself from my previous wine-induced banter. Then the other co-founder came in and we discussed different skills my background could bring to the table. They both seemed earnest and dedicated, and it was a rather warm and fuzzy meeting. Smart people, and nice. Things clicked.

A big setback, though, was the location. It was a long taxi ride from the end of the Metro line to get there, and far away from Washington, a city almost appealing enough to lure me away from New York. On the Amtrak ride home, I debated the pros and cons, and though there were many pros, the major "out in the boonies" con starting weighing down on me.

Several days later, we had further discussions. I had been dreading this talk because although the company was appealing, the move didn't feel right to me. And declining a job offer is hard. You're rejecting someone who has faith in you, and maybe even a connection.

And you never know for sure if you made the right decision. Years ago, I turned down an offer for a start-up that later became quite profitable, with the small original group striking it big. But the choice I made had its advantages, and I can't say I have regrets.

So, I began the "it's not you, it's me" speech, feeling a knot in my stomach when I heard his disappointment. He was completely professional and understanding, and suggested a possible solution or two, which made it even harder. But it just didn't work, so I offered to be a sounding board for his ideas, and we said we'd keep in touch.

Of course, it would be naive to think I'll find the perfect people in the perfect location. And even if I could get through the mounds of information on the latest trends in B2B, B2B2C and P2P, there's no guarantee I could hitch my career to a successful star.

In the meantime, though, I'll be armed with a pot of coffee and my cable modem, ready to multi-task through the next phone call.

Rennie Sloan is a dot-com industry veteran based in New Jersey. She can be reached at rensloan@yahoo.com