Welcome to the curriculum from hell

Since when is "Hotel California" poetry? 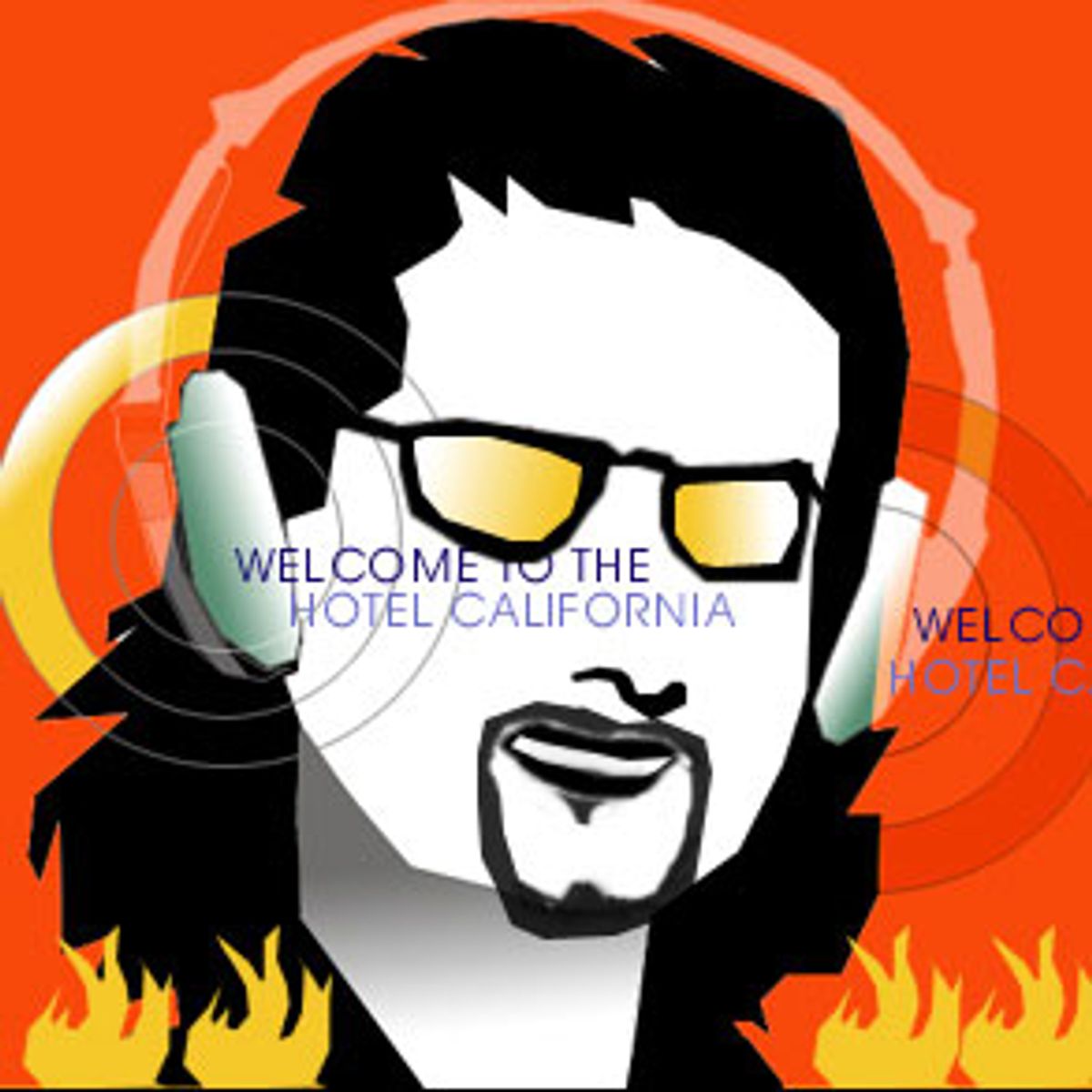 By the time their kids have reached high school, most parents have experienced their fair share of wacky school programs. I have personal recollections of the self-esteem era; the learning-through-osmosis craze; and the "Let's scare the hell out of them," anti-drug death march led by Nancy Reagan. Yet, even as a veteran of institutional goofiness, I was caught off guard -- floored, to be honest -- when "Hotel California," the song by the Eagles, was the basis for an assignment in my kid's English class. Understand: This was not the craven act of one renegade teacher; this was the second time this had happened in two separate schools, with two separate teachers.

I'm still not sure how it happened; perhaps some misguided fan ended up working in the school superintendent's office. Can't blame it on the teachers -- both of them are too young to know any better. And so I'm left shaking my head, wondering if other parents find this disturbing. I wonder if other parents worry that they could end up paying tuition for UCLA's film school only to discover that their kids are studying "The Brady Bunch" as cinematic oeuvre.

The first time this happened -- "Hotel California" was assigned as part of a poetry unit in my daughter's junior high class -- I went along. I consider myself open-minded. I figured there was more to the song than I originally remembered. But why, I asked myself, if they are going to deconstruct rock n' roll, couldn't they at least study Jim Morrison, who, although something of a degenerate, was at least a credible poet? And what the hell happened to Emily Dickinson? Are real poets suddenly devoid of academic charm or relevance?

Whatever. The class was asked to research and write about the meaning of the song, a tall order for anyone, including the Eagles. My daughter genuinely tried to come up with an intelligent-sounding explanation. But there wasn't an answer per se; even the teacher offered no explanation at the end of the class discussion. Particularly perplexed were the kids who, because of language or taste issues, couldn't even ask their parents what it meant. Granted, most of us with passing knowledge of the Eagles were just as clueless, but we could, given our age and experience, at least offer drugs as the subtext.

Then it happened again this year, this time at my son's high school. It was right after they read Jack Kerouac's "On the Road," which is either the greatest contemporary novel of all time or the inebriated ramblings of a genius who stayed true to himself by aimlessly driving around with a friend who neglected his children and used women as cheap entertainment. But I digress.

This was deep into the unit on existentialism; I guess somewhere along the way they replaced Jean-Paul Sartre and Dostoevski with Jack, Glenn, the Dons et al. I was still reeling from the fact that my son hadn't even heard of Sartre when the "Hotel California" assignment came into his life.

OK, I will concede that the first couple of lines of "Hotel California" are sort of nice. That "on a dark desert highway, cool wind in my hair" bit is quite poetic. But that's it. Things definitely start to deteriorate by the next line, which, if you will recall, talks about "the warm smell of colitas." You know, I'm still not certain what that word means. It's not in any dictionary, unless it is "colitis" (many still think it is), which is an inflamed colon. I don't think Don Henley was driving on a dark desert highway smelling an inflamed colon. Maybe he was. (Nancy Reagan and school officials everywhere would be pleased to know that one explanation is that the Eagles were told by their road manager that colitas means "little buds" in colloquial Spanish.)

Yes, I know, there are a number of possibilities. One popular take is that the song free-associates on the trappings of success, drugs and Southern California, but I'm just not convinced. I even went as far as to check the Eagles' Web site for the meaning of the song. Although I couldn't find any comments by Henley (an admirable show of restraint), there was a pertinent interview with guitarist Glenn Frey. Here's what he said:

"At the time we were also quite fond of Steely Dan and listening to a lot of their records. And one of the things that impressed us about Steely Dan was that they would say anything in their songs and it did not have to necessarily make sense."

So can we really discuss ennui, the nature of free will, the struggle of man to overcome threats to his individuality using a song that was an attempt to emulate nonsensical Steely Dan lyrics? I think not.

And the parts that do make sense, let's face it -- they're just not that profound. "I saw a shimmering light/My head grew heavy, and my sight grew dim/I had to stop for the night." He was falling asleep while driving so he stopped for the night. Heavy. "I called up the Captain, please bring me my wine/He said we haven't had that spirit here since 1969." We all know that people had stopped drinking wine in the '70s and had switched to drinks like brandy Alexanders, but is that worthy of inclusion? Is this English lit or Mixology 101?

Even as commentary on the life of a rock star, "Hotel California" is hardly eye-opening. The song could be about any number of contemporary performers: Consider the part about the woman with a Tiffany-twisted mind dancing in a courtyard with a lot of pretty, pretty boys. Britney Spears and 'N Sync? Jessica Simpson and 98 Degrees? Where is the analytical meat here? The literary nugget lodged between the lines?

But most peculiar of all is the strange ending to the song and its sexual allusions. You have mirrors on the ceiling, pink champagne on ice and talk of being prisoners of our own device. Mostly a fantasy befitting a post-adolescent male until it turns into a cheap horror flick, complete with the enticing woman who is evil, everyone gathering for the feast and not being able to kill the beast. All you need is Vincent Price saying the last lines: "You can check out any time you like, but you can never leave."

So here it is the start of my son's senior year. They're kicking things off by studying existentialism -- I swear to God -- and I find myself wondering if they'll employ a team of child psychiatrists to mop up at the end of the semester. A quick look at the reading list brings some comfort, though: Kerouac again, but no "Hotel California" and -- joy! -- Sartre.

He's right there at the bottom, just before the Doobie Brothers and right after Bachman Turner Overdrive.

Sara Hazlewood is a freelance writer in Sunnyvale, Calif.