A bug in the legal code?

David Touretzky talks about methamphetamines, DeCSS and the death of the First Amendment. 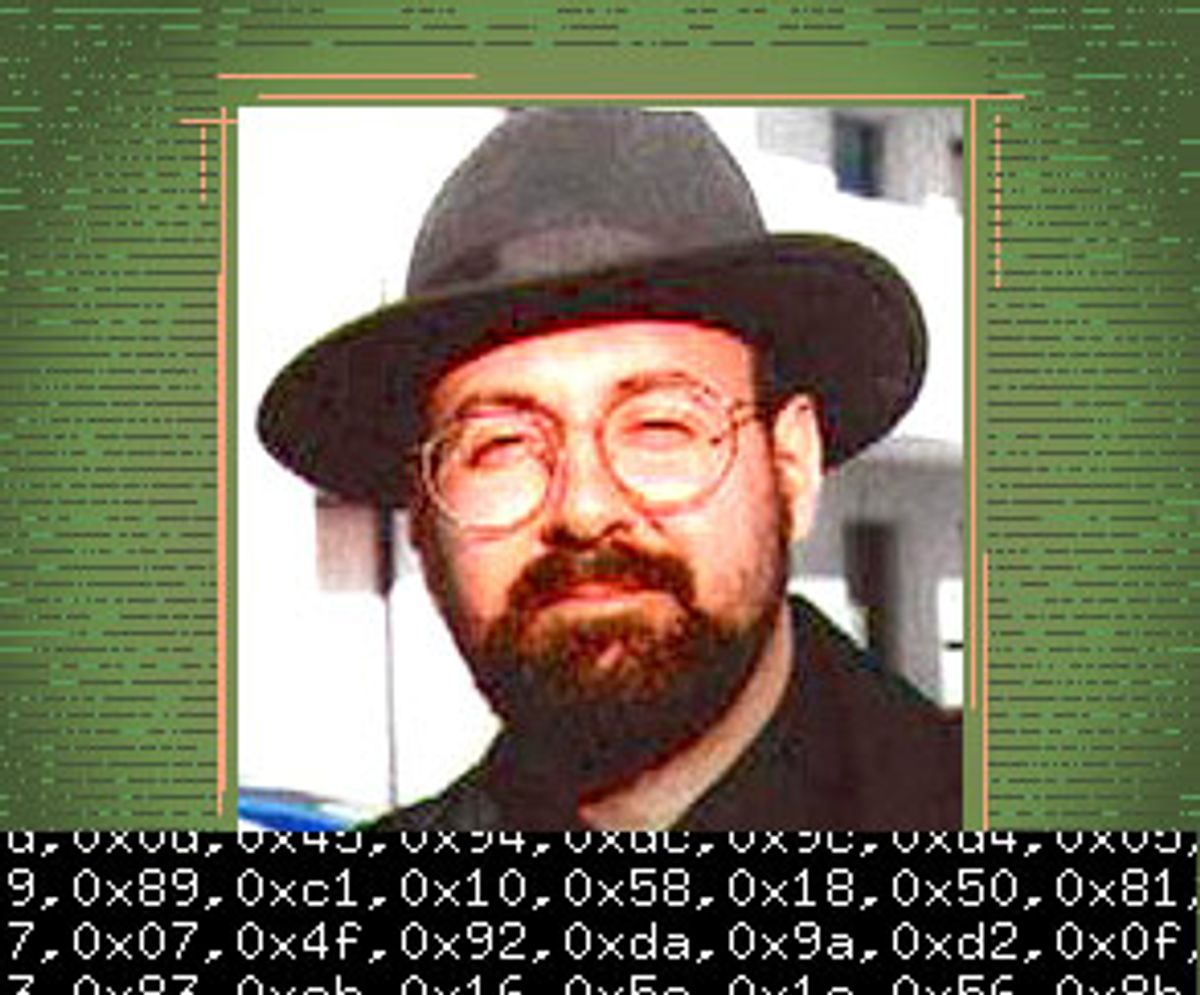 Nearly four weeks after Judge Lewis Kaplan ruled in favor of the movie industry, ordering a hacker Web site not to post or link to DeCSS, copies of the DVD-decrytping code abound.

There are offshore DeCSS posters and anonymous types running DeCSS mirror sites with such catchy names as the do not sue me page. And even the castigated 2600 Hacker Quarterly has gotten around the no-linking decision by simply removing the HTML and carrying a text list of more than 200 URLs you can cut and paste into a browser to reach a site that does post DeCSS. The total delay bought with nine months of litigation: about two seconds.

"Perhaps [Kaplan] really does wish to draw a line between simply stating information and enabling one to click to go to a place on the Internet," says Jonathan Zittrain, a Harvard law professor. "It's arbitrary, but lots of things are arbitrary [in the law]."

Footnote 275 of the ruling -- which expressly acknowledged that the code was enjoined while other "modes of expression that convey the same idea" were not -- seems to confirm this distinction. It also highlights who is to blame: the studios' lawyers. The injunction deals only with these two forms of distribution "because plaintiffs have not sought broader relief," it reads. In other words, "if lawyers simply said enjoin this code, the judge would have considered it," says Mark Lemley, a University of California at Berkeley law professor, whose Duke Law Review article Kaplan quoted at length in a preliminary DeCSS ruling. "But they didn't."

David Touretzky finds this "bizarre." To call attention to the legal loopholes, the Carnegie Mellon computer science professor curates a gallery of alternative versions of the code. You can read an English language translation written by Touretzky, who testified at the DeCSS trial. You can listen to a song or dramatic reading of the program, just as you can view a picture of it. If you want a sugar-coated version, just open up the Yahoo greeting card that contains the program and a coupon for a free Slurpee. This is a guy that really means it when he defends his right to creative expression through code.

Has the MPAA threatened to sue you?

No. They haven't contacted me. My gallery is still in place; in fact I've received a bunch of new contributed exhibits recently. I consider the gallery to be an academic publication; it's listed on my curriculum vitae. If the MPAA wants to start censoring academic works, they know where to find me.

What do you make of the loopholes in Kaplan's decision?

It's proof that the judge didn't know what to do. He admitted that Congress made a mess [with the Digital Millennium Copyright Act] but that it wasn't his job to clean it up. I think if he really tried to protect the plaintiffs' interests like they wanted him to, he would have had to ban all discussion, which he knew he couldn't do. So he made this token gesture.

What was the judge thinking? If he really wants to prevent people from telling others where to get the code, he should have made it illegal to publish the URL in any form. But that would make the fascist nature of his ruling even more painfully obvious. Instead he's opted for a fig leaf, although I can't imagine how he could do this without embarrassment. He's got to know that a ban on "linking" is pointless. Such silly actions merely reduce the people's respect for the courts.

So you don't consider Kaplan's decision a victory for the studios?

All the movie studios have done is make fools of themselves. It's no victory at all. Do you remember those old fairy tales where someone gets three wishes and ends up with something they didn't want? This case is a bit like that. [Kaplan] gave the plaintiffs exactly what they wanted but pointed out that they didn't ask for the right thing.

If the MPAA is smart they'll just clam up and do nothing and wait for this to blow over. Everything they do simply helps our cause by drawing more attention to their attempted power grab. It used to be hard to get people to care about the Digital Millennium Copyright Act. Now they care. We couldn't have done it without them.

Some hackers say they're concerned that Kaplan's decision could lead to a time when all programmers are held responsible for the way complete strangers use their code. What do you think is the most dangerous aspect of the ruling?

The judge decided to invent a new category of speech that does not enjoy First Amendment protection. Besides the old standards (libel, fraud, obscenity, incitement to riot and copyright infringement), the court's new category is, essentially, "anything that potentially threatens the profits of Time Warner and Disney."

That ought to scare the hell out of everyone. If the government can suppress information that is true fact -- as opposed to speech that has a direct effect like inciting people to riot -- then we're all in trouble.

What do you think will happen next?

Well, suppose the MPAA crawls back into their hole and lets the decision stand [without going after sites that post DeCSS in forms not covered by Kaplan's injunction]. At first, a few geeks watch movies. But where we would like to go is having people distributing software for Linux, like LiViD. It would be really nice if you could buy a computer from Dell and have a player on there. But this won't happen if the decision stands. DVD players for Linux will never gain mainstream acceptance. The technology will have to remain underground. It will be contraband information.

In the long run, what the motion-picture and music industries want to do is take control of your hardware. They want everything encrypted: the disk drive, the monitor, even the wires that run between them. What they're doing gradually is outlawing all forms of reverse engineering. Eventually they'll decide what things you'll be allowed to watch, and under what circumstances. This is a battle for control of the PC. These are just the opening shots.

I think we're headed toward a dangerous time. There aren't going to be telephones, radio and televisions -- it will be one device. Unless the right kind of people take up arms, the government is going to say that you can't just hook up any computer to the Net. Only trusted machines can be hooked up. You could be running an approved version of Windows, or if you're using Linux, you would have to run a specific version of TCP/IP.

It will be like the old phone system -- when you couldn't buy your own phone. You had to rent one. It was an attempt to protect against people ruining the telephone network with phones of different voltages. This, of course, is no longer how the system works but I think we could return to it.

The real battle for freedom on the Net is just beginning. We've seen some clues about what's coming: processor chips with embedded serial numbers (Intel has already done this), word processors that secretly store their software license number in every document they touch (Microsoft Word did this until they got caught), attacks on anonymous re-mailers, the FBI reading your e-mail (Carnivore), and so on. It's going to get a lot nastier in the next few years. And with every step, we'll be told that this is necessary to "protect consumers" -- the exact words Jack Valenti is using today to justify the DeCSS lawsuits.

In a previous conversation you referred to the Methamphetamine Anti-Proliferation Act, which would, among other things, ban sites from linking to drug-making information ...

Now, when most of us enlightened folk hear about this proposed bit of legislation, we are likely to shrug it off as just another bit of right-wing craziness that will crumple the moment it hits the shield known as the First Amendment. After all, our elected vermin would never dare pull books off the library shelves because they didn't like the information contained therein, would they? (Well, they probably would if they thought they could get away with it. But they know they can't.) So how can they propose to do the equivalent thing to the Internet?

"It'll never fly," you say. Up until last month, that's what we all would have said. But Judge Kaplan's decision changes all that. The judge ruled that the government has a compelling interest in preventing the dissemination of certain kinds of information. In this case, the information was the code for decrypting DVDs, and the "compelling interest" was protecting the profits of Time Warner and Disney.

Kaplan not only banned publishing the DeCSS code, he also banned linking to it, on the grounds that links were too convenient -- they made it too easy for people to get their hands on what he wished to suppress. Note that he did not ban publishing the URLs as plain text; just linking.

Now, the implications of this are as follows. If the government has a compelling interest in suppressing DeCSS, doesn't it have a far more compelling interest in protecting our innocent young children from the hideous scourge of illegal drugs? And therefore, shouldn't our wise leaders be allowed to suppress speech that might serve to facilitate the manufacture or use of these drugs? Up until Kaplan, the answer was "Hell no! You can't suppress speech simply because you don't like the information it conveys." See, for example, United States vs. The Progressive, where the government tried to block publication of an article on how to build an H-bomb, and lost.

Kaplan's argument about the immediacy of links could even be used to explain why Congress needed to ban drug info on the Web, but not burn books down at the local library. "It's the immediacy, stupid!" But soon, you know, there will be no need for local libraries. Paper books will exist only in museums. So if you can censor the Web, there will eventually be nothing immune to your reach.

And if Kaplan's decision stands, the First Amendment is dead.